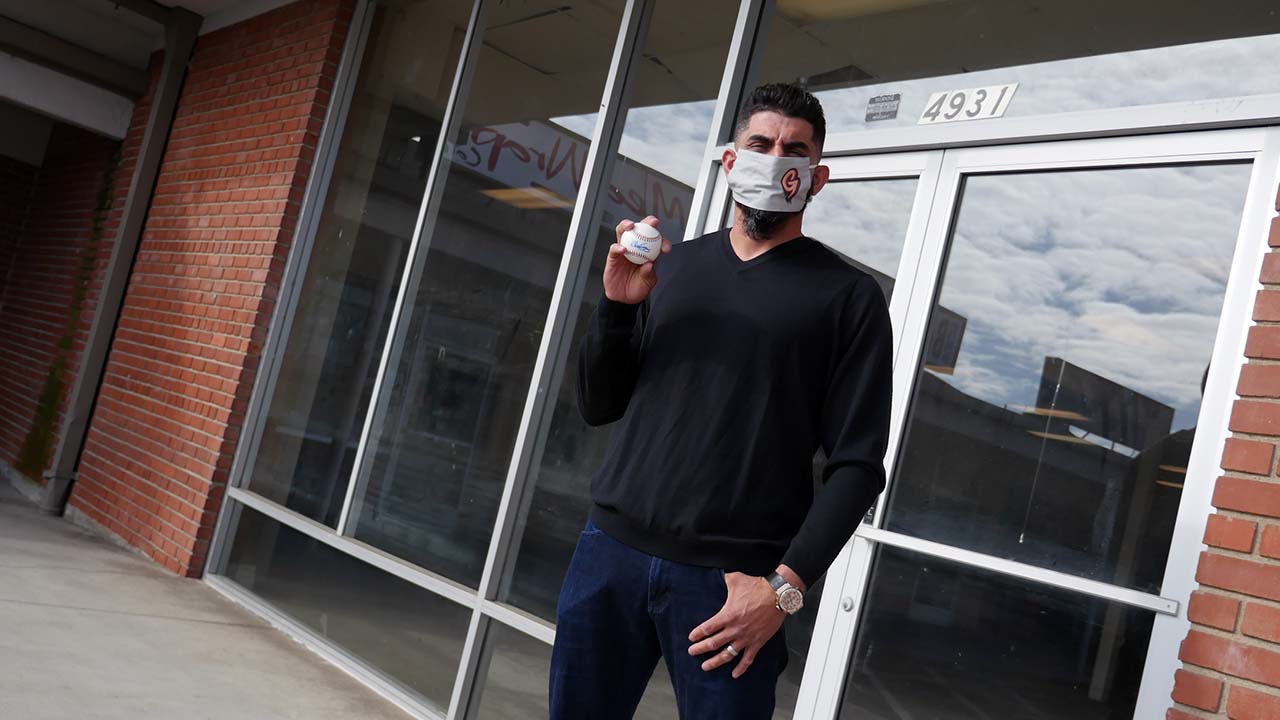 When it comes to operating a retail cannabis location in Fresno, Matt Garza is on the outside looking in.

The former MLB pitcher and 2008 American League Championship Series MVP is in a similar situation like many baseball teams down the stretch — needing another team to lose so a potential cannabis license can fall his way.

Garza applied for two locations, neither of which were selected when the city announced its preliminary 21 licensees.

Only a city councilmember, the mayor, or an “approved applicant” can file an appeal. Garza tried to appeal but was rejected on a technicality.

“I was given sent a letter saying that I had no grounds to file an appeal because I was not an approved applicant,” said Garza, a product of Washington Union High School and Fresno State.

Garza said the process has been flawed, with rules and interpretations changing, especially with other applicants not allowed to appeal.

“I don’t think it’s fair at all. I don’t think it’s right. I think if people were under these rules from the beginning, a lot of them would have not have not applied. It really handcuffs you in terms of investment for a possible rate of return. These leases weren’t cheap,” Garza said. 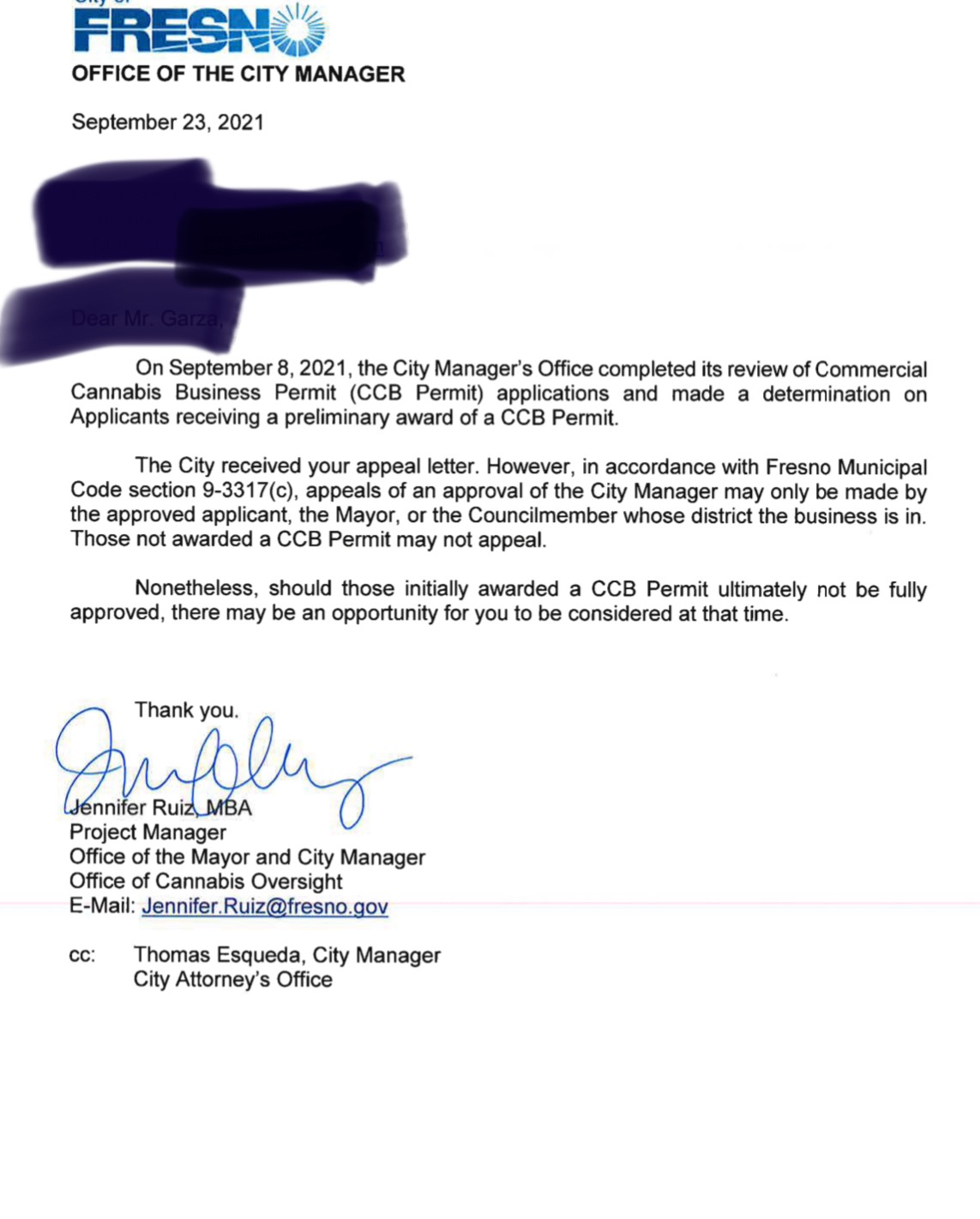 A letter from the city of Fresno to Matt Garza, denying his appeal.

District 1 Councilwoman Esmeralda Soria filed appeals against two of the licensees in her area — “Lemonnade” at the former Bank of America building in the Tower District (1264 N. Wishon Ave.), and The Artist Tree (1426 N. Van Ness Ave.).

Lauren Fontein, founder of The Artist Tree, says they have worked closely with the neighborhood, including holding meetings.

“We were very surprised and disappointed that the City Manager’s decision was appealed, because it delays our ability to file our CUP (conditional use permit) application and begin developing our property,” Fontein said via email.

“The process has been straightforward, transparent and similar to that of many other California municipalities,” Fontein said.

In the preliminary scoring, Garza’s Authentic 559 finished third in District 1.

“It should go to my location if they appeal these two. So I’m pretty interested to see how this pans out,” Garza said.

Garza’s District 4 store, Authentic Fresno, was “buffered out” because it was within 800 feet of a “Cookies” store at Blackstone and Shaw avenues.

Both “Lemonnade” and “Cookies” are majority owned by Kacey Auston, a Fresno business consultant. She told GV Wire, she looks forward to the process playing out, convinced her stores were granted licenses properly.

“Neighbors had complained that they had only received their notices two days prior to the appeal deadline. So I want to make sure there’s more public participation and public input since those establishments are adjacent to residential neighborhoods,” Arias said at a Sept. 30 city council meeting.

Soria provided a similar reason for her appeals, to allow more public participation.

A third Auston-owned location, another “Lemonnade” at 7315 N. Blackstone Ave. was appealed by District 2 Councilman Mike Karbassi. Speaking in August to “Sunday Morning Matters,” Karbassi said the proposed location is too close to Pinedale Elementary School.

The Google Map distance tool shows the two locations approximately 800 feet apart, depending on where you measure. If it is the actual building of “Lemonnade” to the edge of the school parking lot, the distance is approximately 817 feet.

From the edge of the “Lemonnade” parking lot, the distance shrinks to 750 feet.

The ordinance says 800 feet from “any property boundary.”

Is District 4 Licensee Too Close to Education Center?

Garza filed his appeal because the “Cookies” location at 5048 N. Blackstone Ave. is approximately 600 feet away from PrepEgg Education, a tutoring service located at 114 E. Shaw Ave.

A check of the Google Maps distance tool confirms the two entities’ proximity to each other.

The cannabis code says that any retail location must be 800 feet away a school, daycare or youth center.

Tutoring centers are not specifically defined in the code, but could fall under the definition of a youth center, which is described as “any public or private facility that is primarily used to host recreation or social activities for minors.”

It may not be considered a school based on a memo from the city attorney’s office, which defined a school as “Facilities for primary or secondary education, including public schools, charter schools, and private and parochial schools having curricula comparable to that required in the public schools of the State of California.”

The city councilman for District 4, Tyler Maxwell, could have appealed, but did not. He did not respond to GV Wire’s inquires as of time of publication.

“I find that interesting because everybody who had a zoning issue appealed their locations,” Garza said.

Kacey Auston, who is also majority owner of “Cookies,” says being near a tutoring center does not violate the ordinance.

Garza said he has not considered litigation yet, but has heard — without naming names — that other applicants might sue.

Others have told GV Wire they are investigating whether the scoring system that ranked retail operations was fair. No one wanted to speak on the record regarding those accusations.

Who Can Appeal and When Appeals Can Be Heard

Dyer defended the appeal process, saying only five appeals of 120 total applicants “is not bad.”

“We knew that we were going to have appeals. We knew that (there were applicants) who feel upset. We knew that there’d be potential litigation. So what we tried to do is make sure that we had a fair process, one that was defensible and to make sure that it was objective as human humanly possible,” Dyer said.

The city council passed the cannabis ordinance in 2018 and it has been amended several times. The council approved language in January 2020 detailing how the appeal process worked.

“Any decision of the City Manager regarding approval of a commercial cannabis business permit may be appealed to the City Council by: the applicant, the Mayor or the Councilmember whose district the business would be located in,” says Sec. 9-3317 of the Municipal Code.

The city changed its interpretation through a notice on Aug. 13, 2021, adding one word to who can appeal: “approved applicant.” This precluded non-winning applicants from filing an appeal.

City spokeswoman Sontaya Rose explained that only “approved” applicants can appeal referred to a latter stage of the approval process. The city council still has to issue conditional use permits.

If applicants do not like some of those conditions, they can appeal, Rose said.

The cannabis code does allow the city manager discretion interpreting the rules. “The City Manager… shall be authorized to prepare the necessary forms, adopt any necessary rules to the application, regulations and processes” Sec. 9-3316(a) says.

The code also sets a timeline of when the appeals can be heard. “A City Council hearing shall be set within twenty (20) days of the City Manager receiving an appeal.”

The deadline for City Manager Thomas Esqueda receipt of appeals for 18 of the licenses (three others were announced weeks prior) was Sept. 23. Twenty days after would be Oct. 13. It is unclear if “set” means schedule, or if the hearings have to take place by Oct. 13.

The city council has set a date to hear the appeals, a special meeting Wednesday, Oct. 27 at 9 a.m. As of now, the council chambers will be open to the public.

Cannabis Attorney Says Any Applicant Should Be Able to Appeal

Nicole Howell, an attorney whose firm Clark Howell is listed on the Cannabis Law Report Top 200 Cannabis Lawyers, is skeptical of not allowing other applicants to appeal.

She says the first word of the section dealing with appeals — “any” — may be a factor.

“It doesn’t say ‘the decision to award a commercial cannabis permit.’ This says any decision regarding approval. I’d go back and say any decision that they made, whether its selection criteria or the process like those are all decisions that are regarding the issuance of a commercial cannabis permit. I would say that any applicant would be under the plain language of the ordinance would be entitled to appeal,” Howell said.

Howell’s firm does represent any applicants nor the city.