Haener Is One Tough 'Dog as Fresno State Stuns UCLA 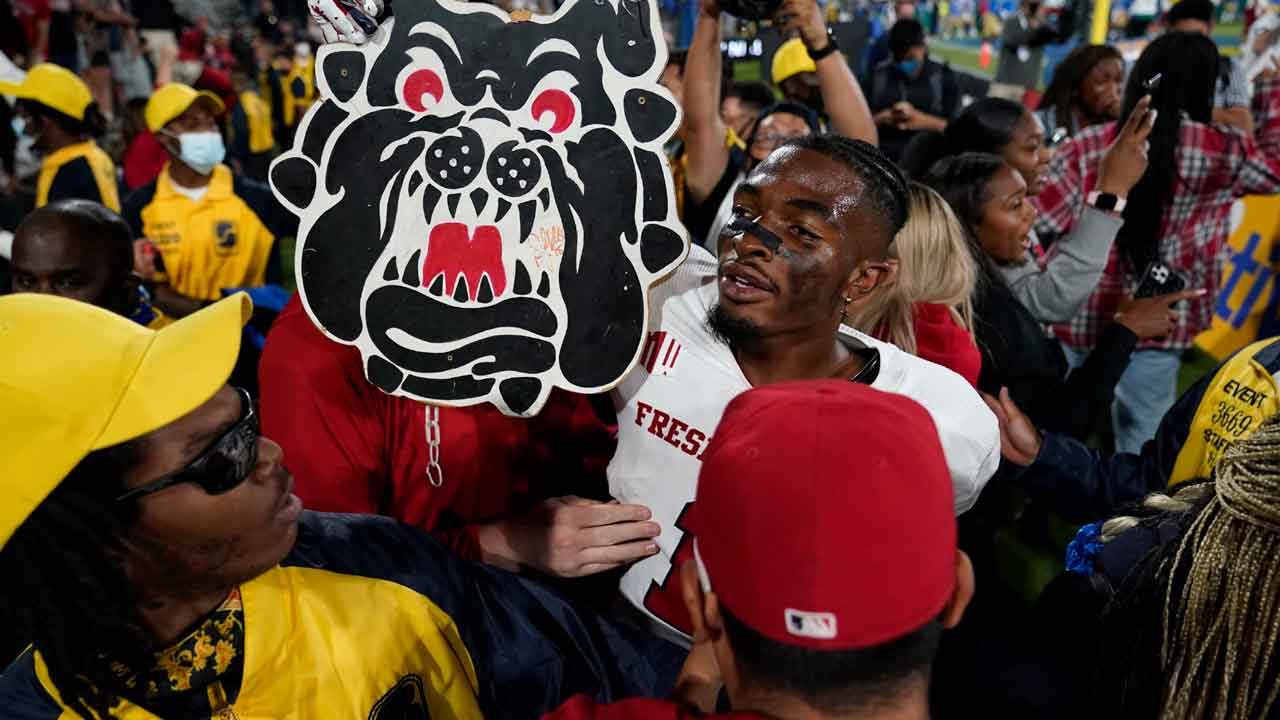 Fresno State’s Jake Haener was able to overcome a crushing hit to his right hip to lead the Bulldogs to an upset victory over No. 13 UCLA.

Haener threw for 455 yards, including the go-ahead touchdown pass to Jalen Cropper with 14 seconds remaining, as the Bulldogs beat the Bruins 40-37 Saturday night at the Rose Bowl.

“We know he’s tough, right. We’ve seen that over the course of last year and this year. He’s tough,” Fresno State coach Kalen DeBoer said. “When the pressure was great, he was at his best and that’s what’s awesome.”

Haener has thrown for over 300 yards in three of the Bulldogs’ first four games and leads the nation with 1,464 passing yards.

The senior transfer from the University of Washington had to be at his best in a game that saw four lead changes over the final 7 minutes, 27 seconds after the Bulldogs had a 23-10 lead at halftime. 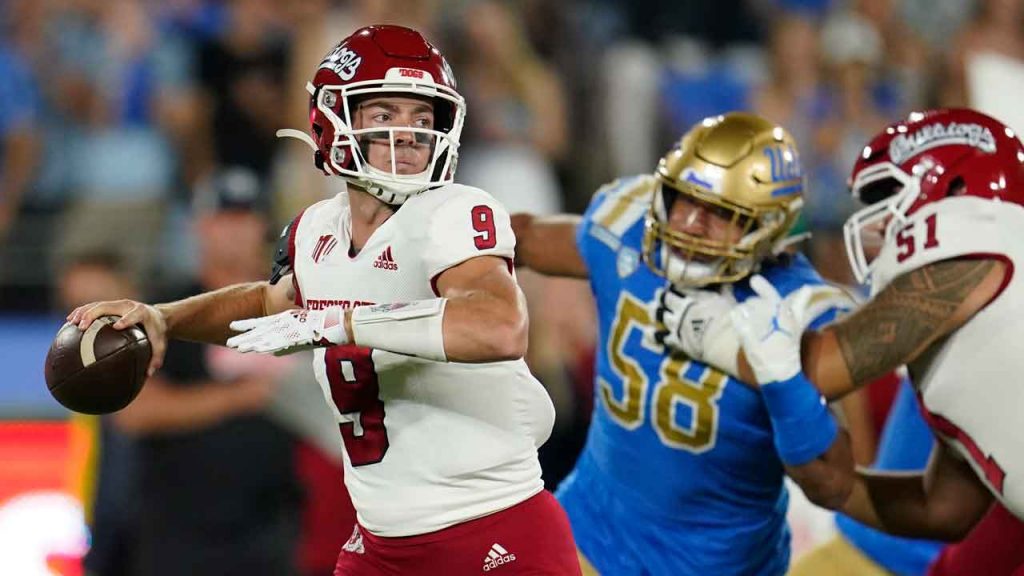 Fresno State quarterback Jake Haener looks for a receiver during the first half of Saturday’s game against UCLA at the Rose Bowl in Pasadena. (AP Photo/Marcio Jose Sanchez)

Fresno State finished the job against a Pac-12 program after leading then-No. 11 Oregon in the fourth quarter two weeks ago before losing.

Haener’s 19-yard strike to Erik Brooks put Fresno State back in front 33-30 with 2:55 remaining, but he was wincing in pain on the ground after taking numerous hits throughout the night.

After UCLA regained the lead with 54 seconds left on Dorian Thompson-Robinson’s 15-yard pass to Kyle Phillips, a limping Haener directed a six-play, 75-yard drive that gave the Bulldogs (3-1) their fourth straight win over the Bruins.

“He was a pretty mobile quarterback. We struggled to keep him in the pocket,” UCLA cornerback Qwuantrezz Knight said.

Cropper had three receptions for 50 yards on the drive, including the TD. Josh Kelly also had a 26-yard catch that put the ball at the UCLA 12 with 23 seconds remaining.

“Yeah, I’m not gonna lie, I was a little tired,” Cropper said. “But that last play, I saw the corner drop. And just knowing how Jake trusts me throwing that back shoulder into the corner of the end zone, the feeling’s so surreal. I can’t really describe it in words.”

“I think the quarterback is a special player,” UCLA coach Chip Kelly said. “We threw everything at him. We blitzed him, played cover zero, rushed three, and dropped everyone else back into coverage. I think we threw the entire kitchen sink at him and he handled everything.” 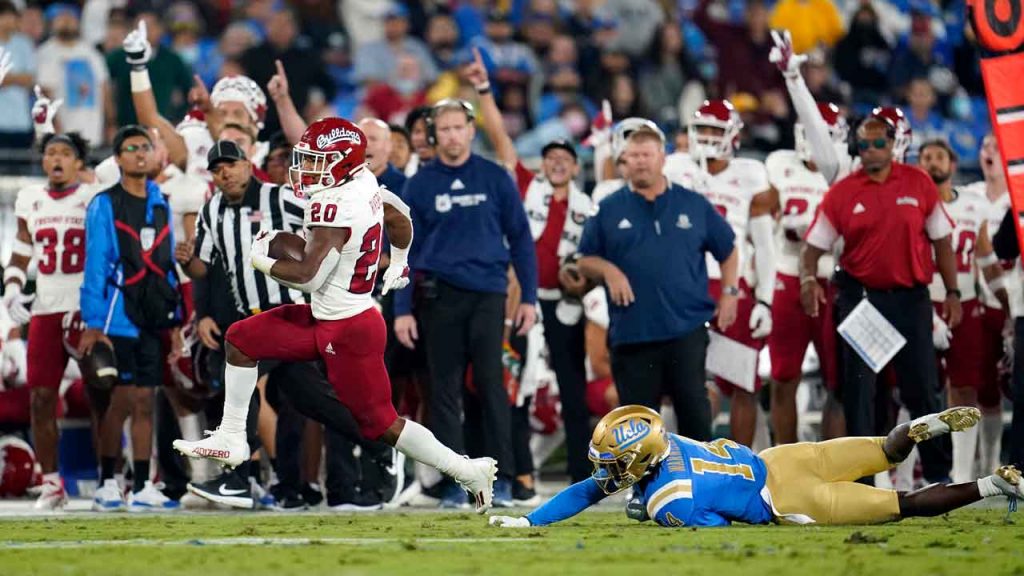 Fresno State running back Ronnie Rivers runs past UCLA defensive back DJ Warnell to score a rushing touchdown in  the first half Saturday at the Rose Bowl in Pasadena. (AP Photo/Marcio Jose Sanchez)

UCLA was able to rally back due to a pair of Bulldogs turnovers. Fresno State led 26-17, had the ball at the UCLA 9 and were looking to put the game away with 9:23 remaining when Carl Jones stripped Haener of the ball. After it rolled 34 yards and a mad scramble ensued, Myles Jackson recovered it at the UCLA 43.

Three plays later, Thompson-Robinson delivered a perfect pass to Phillips, who eluded Bralyn Lux’s coverage, for a 38-yard score to bring UCLA within 26-23.

The Bulldogs wouldn’t have it long on the ensuing possession when Kelly fumbled after a 13-yard completion. UCLA’s Jordan Genmark Heath recovered and returned it 20 yards to the Bulldogs 18.

UCLA took its first lead since the first quarter when Zach Charbonnet capped off a three-play drive with a 3-yard TD up the middle to put the Bruins up 30-26.

Thompson-Robinson passed for 278 yards and three touchdowns while Phillips had seven receptions for 113 yards and two TDs. Charbonnet ran for two touchdowns for the Bruins (2-1), who were ranked for the first time in four years.

“We definitely made it tough on ourselves. We made mistakes and bit ourselves in the foot too many times,” Thompson-Robinson said.

Rivers scored both of his touchdowns in the first half. He opened the scoring with a 1-yard run up the middle with 5:54 remaining in the first quarter to give the Bulldogs a 6-0 lead. The 2-point conversion was no good after holder Carson King’s pass was incomplete.

Rivers then broke a pair of tackles en route to a 36-yard score up the right sideline midway through the second quarter to extend Fresno State’s lead to 20-10.

Bulldogs Move Into Top 25 With Last-Second Win Over UCLA