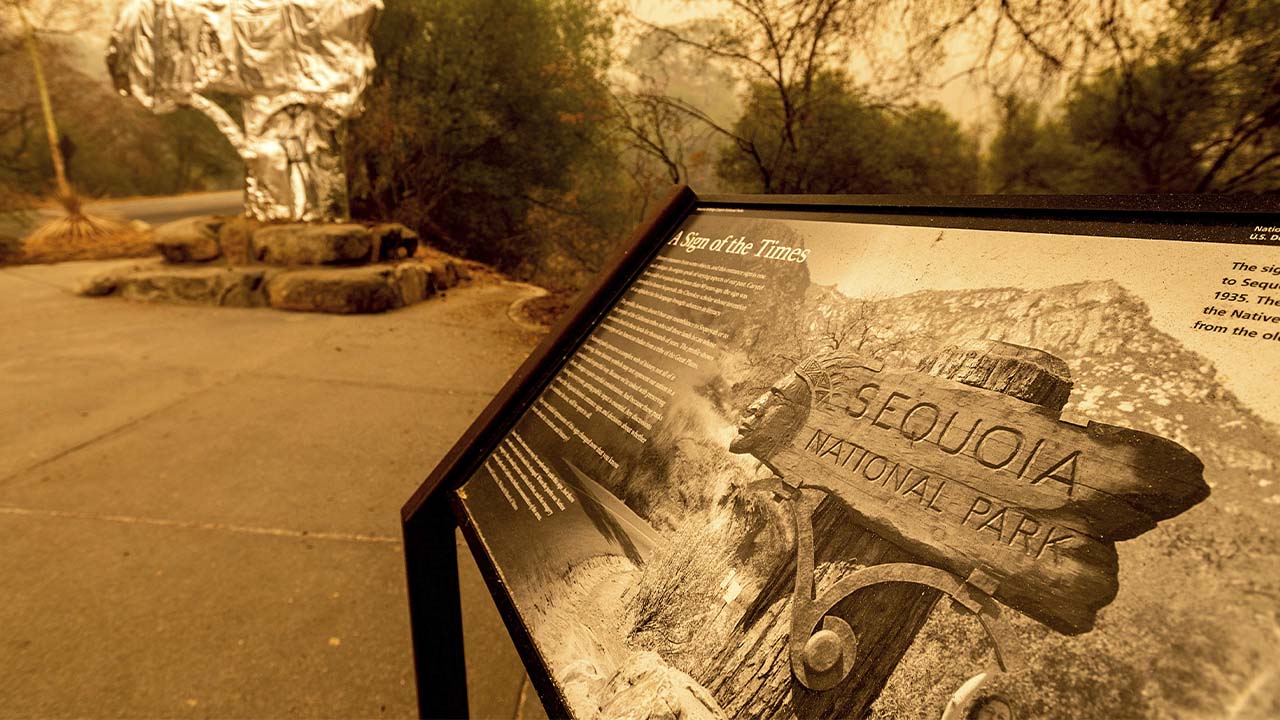 Firefighters have wrapped the base of the world’s largest tree in a fire-resistant blanket as part of an effort to save a famous grove of gigantic old-growth sequoias from wildfires burning in Sierra National Park.

The colossal General Sherman Tree in the park’s Giant Forest, some other sequoias, the Giant Forest Museum and other buildings were wrapped for protection against the possibility of intense flames, fire spokeswoman Rebecca Paterson said.

The aluminum wrapping can withstand intensive heat for short periods. Federal officials said they have used the material for several years throughout the U.S. West to protect sensitive structures from flames. Near Lake Tahoe, some homes that were wrapped in protective material survived a recent wildfire while others nearby were destroyed. 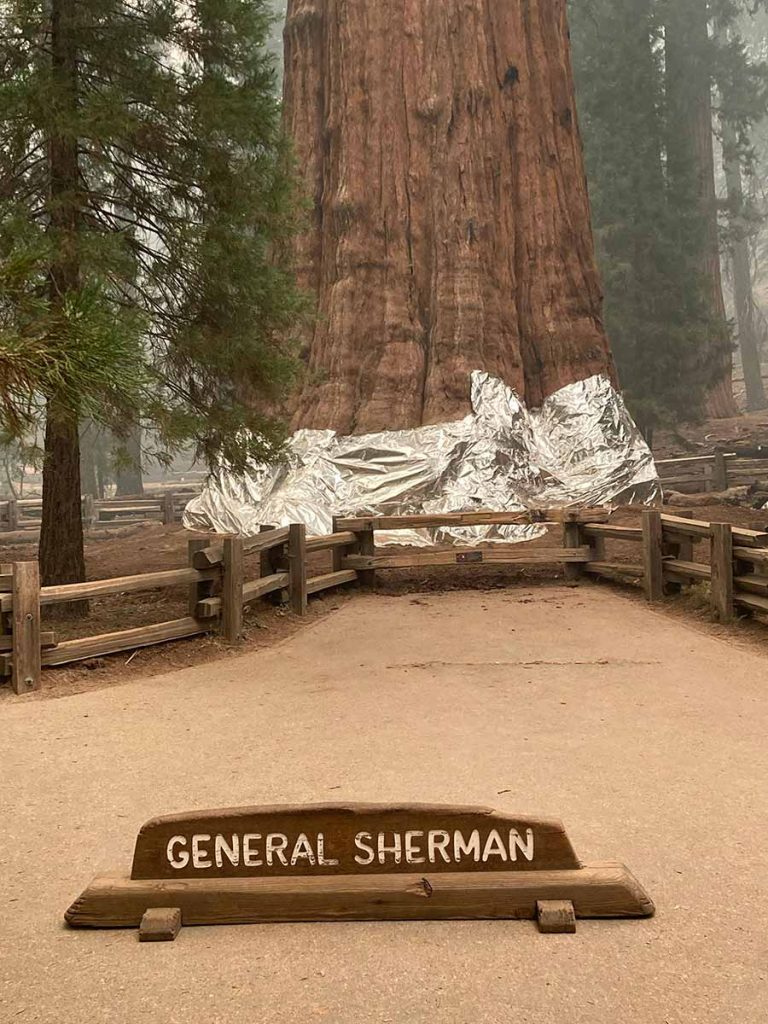 The General Sherman Tree in Sequoia National Park is wrapped with flame resistant fabric as the Colony Fire advances as part of the KNP Complex Fire on September 16, 2021. (National Parks Service photo)

The Colony Fire, along with the Paradise Fire, are burning in Sequoia National Park and referred to jointly as the KNP Complex Fire. The Colony Fire was expected to reach the Giant Forest, a grove of 2,000 sequoias, within days, fire officials said.

The fires forced the evacuation of the park this week, and parts of the town of Three Rivers outside the main entrance remained evacuated.  A community meeting is scheduled for 7 p.m. Friday at the Three Rivers Veterans Memorial Building at 43490 Sierra Dr.

Nearly 500 personnel are fighting the blazes, which have now burned 9, 365 acres. On Thursday, a national interagency fire management team took command of efforts to fight the combined KNP Complex blazes.

“Due to inaccessible terrain, a preliminary assessment of the fire’s effects on giant sequoia trees within the grove will be difficult and may take days to complete,” the statement said.

It grew significantly overnight to more than 6 square miles and with no containment so far, a Sequoia National Forest statement said. The Windy Fire has also burned a section of the Tule River Indian Reservation.

The growth of the fire led the Tulare County Sheriff’s Office to warn the communities of Ponderosa, Quaking Aspen, Johnsondale and Camp Whitsett Boy Scouts camp to be ready to evacuate if necessary. Additional evacuation information can be found at Tulare County’s official emergency notifications website.

Largest Tree in the World at Risk

The General Sherman Tree, now at risk from the Colony Fire, is the largest in the world by volume, at 52,508 cubic feet, according to the National Park Service. It towers 275 feet high and has a circumference of 103 feet at ground level.

Sequoia and Kings Canyon national parks Superintendent Clay Jordan stressed the importance of protecting the massive trees from high-intensity fire during a briefing for firefighters.

A 50-year history of using prescribed burns — fires set on purpose to remove other types of trees and vegetation that would otherwise feed wildfires — in the parks’ sequoia groves was expected to help the giant trees survive by lessening the impact if flames reach them.

A “robust fire history of prescribed fire in that area is reason for optimism,” Paterson said. “Hopefully, the Giant Forest will emerge from this unscathed.”

Giant sequoias are adapted to fire, which can help them thrive by releasing seeds from their cones and creating clearings that allow young sequoias to grow. But the extraordinary intensity of fires — fueled by climate change — can overwhelm the trees. 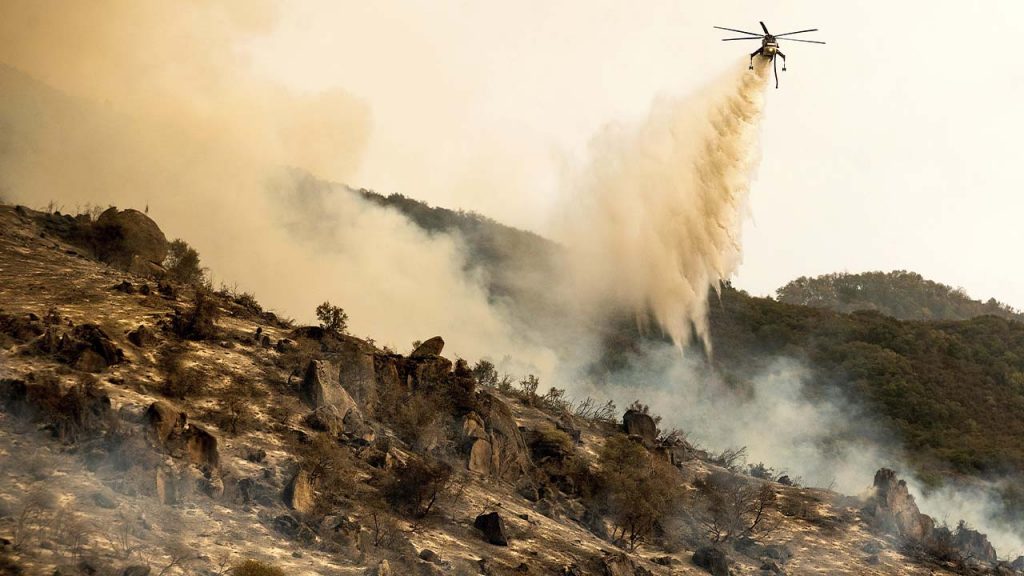 A helicopter drops water on the KNP Complex Fire burning along Generals Highway in Sequoia National Park on Wednesday. The blaze is burning near the Giant Forest, home to more than 2,000 giant sequoias. (AP Photo/Noah Berger)

That happened last year when the Castle Fire killed what studies estimate were 7,500 to 10,600 large sequoias, according to the National Park Service.

A historic drought and heat waves tied to climate change have made wildfires harder to fight in the American West. Scientists say climate change has made the region much warmer and drier in the past 30 years and will continue to make weather more extreme and wildfires more frequent and destructive.

The wildfires are among the latest in a long summer of blazes that have scorched nearly 3,550 square miles in California, destroying hundreds of homes.

Crews had limited ground access to the Colony Fire and the extreme steepness of the terrain around the Paradise Fire prevented it completely, requiring extensive aerial water and flame-retardant drops on both fires.