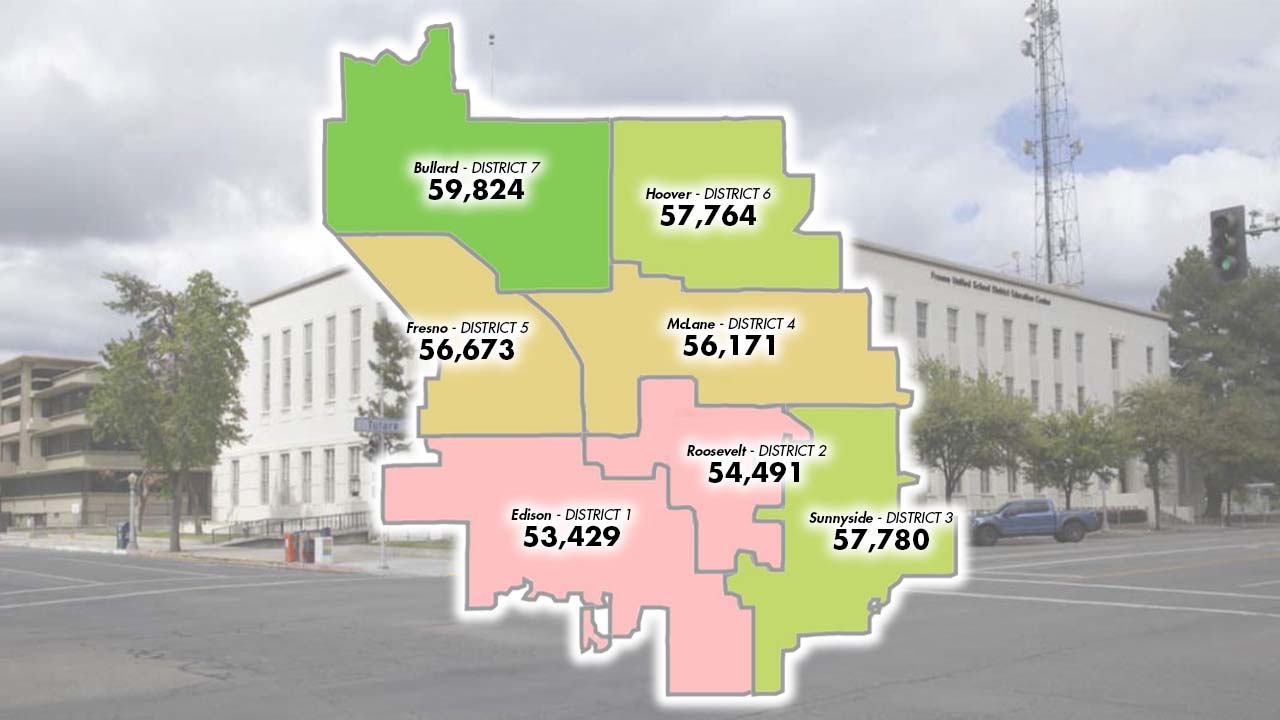 The once-in-a-decade redistricting of government bodies such as Fresno Unified will be overlapping this spring with the special election to fill the Area 5 seat that was left vacant with the death of Trustee Carol Mills on July 21.

But School Board candidates won’t have to worry about redrawn lines for the April 12 special election. Chris Skinnell, a partner with Nielsen Merksamer Parrinello Gross & Leoni LLP, told the board Wednesday evening that the current boundaries for Area 5 will still be in effect for April’s election.

The Bay Area firm is assisting the district with the process of determining where the trustee area boundaries should be redrawn based on the results of the 2020 Census, which showed that the northwest, northeast, and southeast trustee areas (Bullard, Hoover, and Sunnyside) have populations larger than the district average, while the southwest and central areas (Edison and Roosevelt) have smaller-than-average populations.

Any redrawing of district lines will need to consider other factors that include demographics, geography, and communities of interest, Skinnell told the board.

The district’s goal is to finalize its redistricting plan by Jan. 12. The state deadline is Feb. 28.

In the meantime, the board will consider draft redistricting plans and get input from the community.

As for the April 12 election, thus far only one candidate, Libertarian Russell C. “Russ” Allen, has filed campaign paperwork.

Allen, 63, who retired as a Fresno Unified teacher last February, told GV Wire that he felt motivated to run for the Area 5 seat so he could continue advocating for alternative education as Mills had done.

It will be his first run for public office. “Part of me doesn’t want to, but I feel like this is what God’s telling me I need to do,” Allen said. “I feel called. We’ll see what happens.”

It will be a while yet before the Area 5 candidates can actually file for the election. James Kus, County Clerk/Registrar of Voters, said the filing period will open on Dec. 20 and close Jan. 14.

The winner of the April 12 election will complete Mills’ term through November 2024.

The redistricted boundaries will be in effect for the November 2022 School Board election in which the Areas 1, 3, 4, and 7 seats will be up for election (Edison, Sunnyside, McLane, and Bullard). Thus far, incumbents Valerie Davis (Sunnyside) and Terry Slatic (Bullard) and school psychologist Susan Wittrup, a candidate for the Bullard seat, have filed campaign statements.

Author/journalist Mark Arax calls him “a local developer who perverted the general plan for growth, and put in place a system of racial coding that allowed him to become one of the city’s wealthiest men.”

Even so, community members are telling trustees they don’t want the name of Forkner Elementary School in northwest Fresno to be changed, Trustees Claudia Cazares and Terry Slatic said at Wednesday’s board meeting.

For the alumni and families, some of whom are in their second generation of attending Forkner Elementary, it’s about maintaining tradition, Cazares said.

She recommended that prior to proceeding with deliberations about renaming the school, the district should conduct a survey or a Zoom meeting so opponents of the name change can weigh in.

One person told her “it comes down to identity,” which Cazares said she was having a hard time relating to since she attended 10 to 15 different schools as a youngster.

“But there’s people in this community that do (relate to the school’s identity),” she said. “And so we want to make sure we reach out to them. … I think it’s important that they know that we’re listening to them as well.”

The board agreed last week not to wait for a new board bylaw on renaming schools but to proceed with discussions to replace Forkner’s name with that of H. Roger Tatarian, a journalist, UPI editor in chief, and Fresno State journalism instructor whose name got heavy community support in a district survey to name the alternative education campus at 10th Street and Ventura Avenue.

When the board decided to name the campus for local philanthropists Francine and Murray Farber instead of Tatarian, Arax and other members of the Armenian community started lobbying to rename the school named for Forkner, whose deed restrictions also excluded Armenians. As of now, there are no schools or facilities in Fresno Unified bearing the name of an Armenian.

Turns out, renaming schools is not just a Fresno thing.

Burbank Unified School District trustees voted in March to rename a middle school for Dolores Huerta, the civil rights activist and co-founder of the National Farmworkers Association that would later merge with the Agricultural Workers Organizing Committee to become the United Farm Workers.

The Southern California school was formerly named for David Starr Jordan, who was the founding president of Stanford University as well as a leader in the eugenics movement that sought to control reproduction based on race and heritage, ostensibly to improve the gene pool.

Huerta’s was one of five names under consideration. The Burbank trustees and renaming committee also considered naming the school for Supreme Court Justice Ruth Bader Ginsburg, aviator Amelia Earhart, and Barbara Jordan, a civil rights activist who was the first Southern African American woman elected to the House of Representatives.

The fourth name under consideration was Mariposa Middle School. Would that have meant changing the school mascot to the Butterflies? “The mascot has always been and will remain the Cougars,” says the school’s principal, Dr. Jennifer Meglemre.