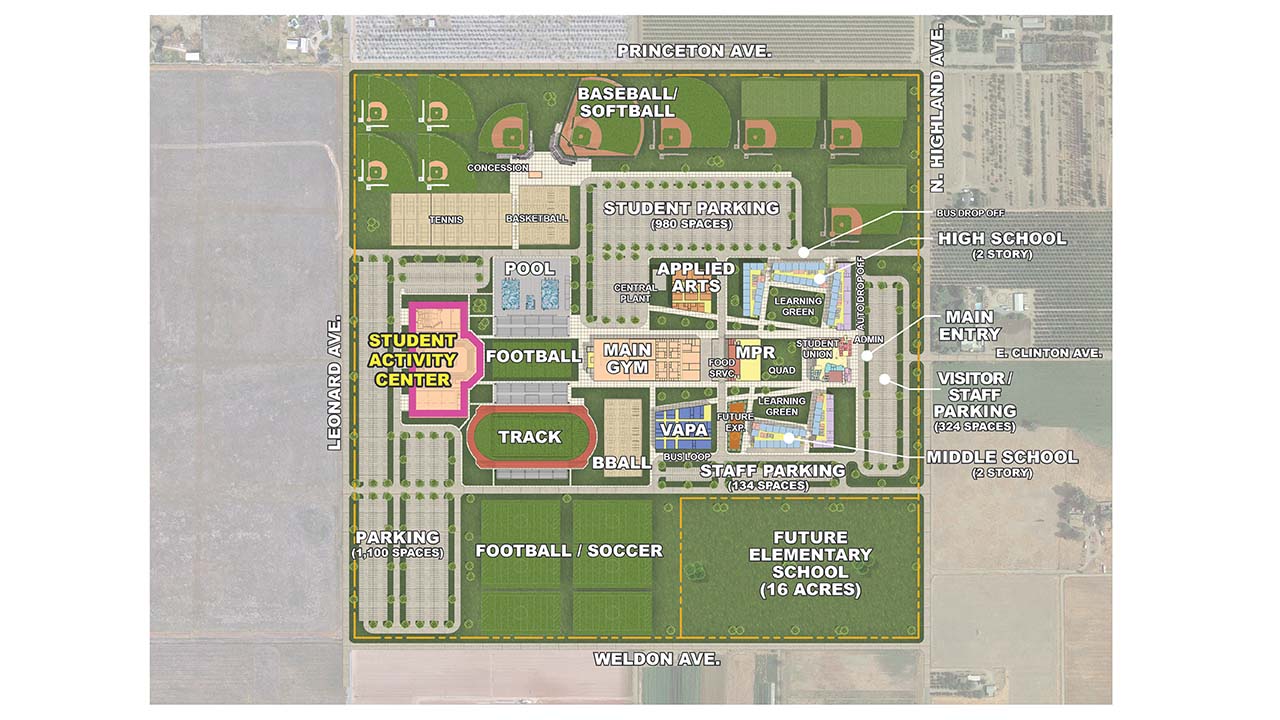 Map of the Terry Bradley Educational Center, which will include a 5,000-seat special events center. (Clovis Unified School District.)
Share with friends

The new educational center that Clovis Unified School District is preparing to build southeast of Fresno will include an events center that could host statewide volleyball or wrestling tournaments, robotics competitions, and concerts.

The Student Activity Center would seat about 5,000 to 5,500 — larger than high school gyms that typically seat about 3,000 — and would be about a third of the size of the cavernous Save Mart Center on the Fresno State campus, Denver Stairs, assistant superintendent of facility services, told GV Wire this week.

Adding seating to the center’s floor would increase capacity to 6,500. That’s ample to accommodate all of Clovis Unified’s staffers for a districtwide meeting, or for robotics and eSports tourneys, other sporting events, and concerts, Stairs said.

“This facility gives us the opportunity to really open up and use it for a multitude of things,” he said. “A gym, no matter how you dress it up, it’s still a gym. And so this would give us an opportunity to just showcase a number of other co-curricular endeavors that kids are involved in. It would be something that is still part of the district and that we can use as the need arises with different student groups.”

The Terry Bradley Educational Center, located between Leonard and Highland avenues north of McKinley Avenue, is in unincorporated Fresno County that’s within the city of Fresno’s sphere of influence.

“This facility gives us the opportunity to really open up and use it for a multitude of things.” — Denver Stairs, assistant superintendent of facility services, Clovis Unified School District

The campus will eventually include an elementary, middle, and high school, and the events center, which is proposed for the west side of the campus near Leonard Avenue and adjacent to plenty of parking. The elementary school will be in a future construction phase, Stairs said.

It will be a few years yet before the Student Activity Center opens. The district is in the process of receiving requests for proposals from contractors bidding on the lease-leaseback project. The cost for the campus is yet to be finalized, but the district expects most of it — $250 million to $300 million — will be covered by the $335 million Measure A that voters approved in November 2020.

There will be other funding sources to complement the bond money, Stairs said.

Under the current schedule, construction will begin in March 2023 on a new middle school that would open in 2026, followed by a new high school.

Including an events center in the campus plan follows the Clovis Unified blueprint of providing each high school campus or education center with a “marquee” facility that’s available for use by the community as well as the district, Stairs said.

Such specialized sites include the Shaghoian Performing Arts Center at Clovis North, the Veterans Memorial Stadium track and field facilities at Buchanan, Lamonica Stadium at Clovis High, and Clovis West’s aquatics center. A soccer complex is under construction at Clovis East High and should be completed in the next 12 to 18 months, district spokeswoman Kelly Avants said.

With its central location in California and its top-flight facilities, Clovis Unified is able to attract a number of statewide tourneys, and the new events center could continue that trend, Stairs said.

The district receives queries on a daily basis about the availability of school gyms, and the larger size of the events center could provide more venue options, he said.

For example, Stairs said, NBA star recruit Jalen Green recently hosted a two-day basketball camp at Clovis North. The camp was divided into multiple sessions to accommodate all who wanted to attend, but with a larger venue there could have been a single session, he said.

The California Interscholastic Federation track and field championships in 2019 — the 2020 event was canceled because of the pandemic — brought 11,000 attendees to the Fresno-Clovis area and had an economic impact of $1.3 million, Caneva said.