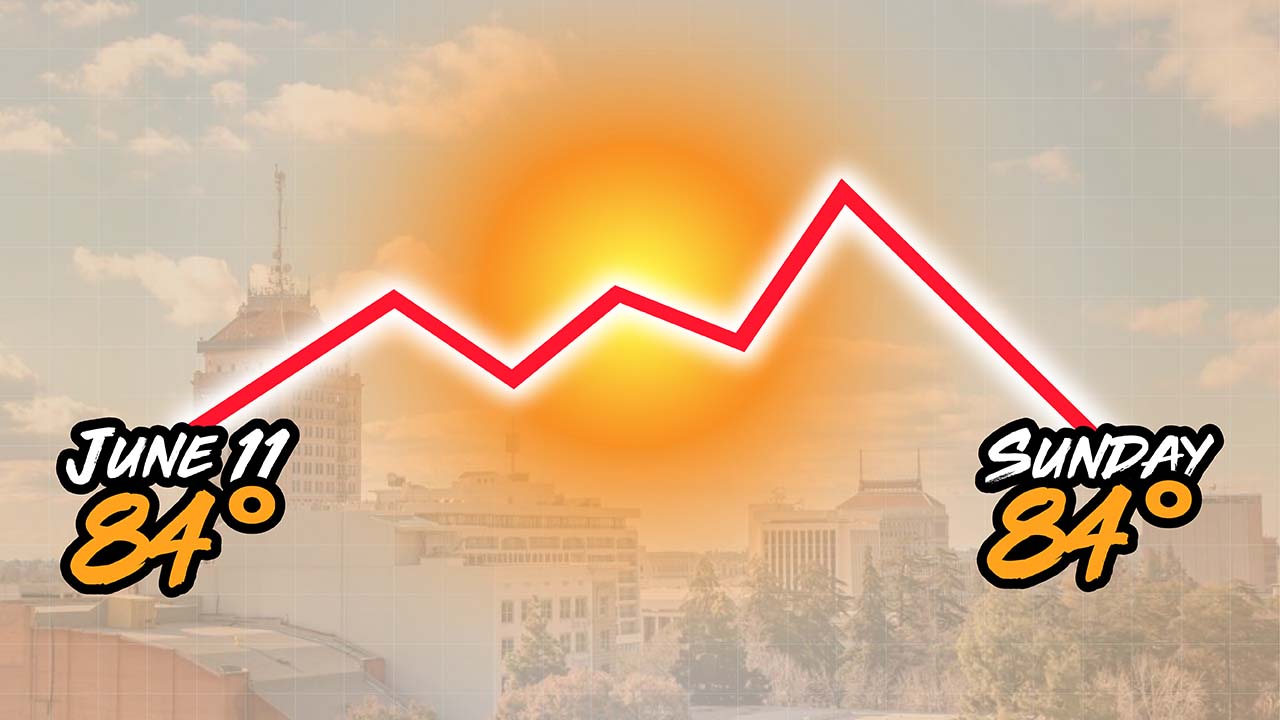 On Sunday, Fresno's high could drop to 84 degrees — the first time below 85 degrees since June 11. (GV Wire/Justine Cha)
Share with friends

If you’ve been waiting for cooler weather to plan outdoor activities, your wait ends this weekend.

Monday will be even cooler, with a forecast high of 83 degrees. But don’t start digging out those fleece jackets and wool socks quite yet — temperatures are forecast to climb back into the 90s for the remainder of next week.

This weekend’s mini-break from the heat “is a good sign that fall is knocking on our door,” Jim Andersen, a National Weather Service meteorologist in the Hanford office, told GV Wire on Thursday.

For those heading outdoors, skies should mostly be clear of wildfire smoke from the KNP Complex fire burning in Sequoia National Park east of Visalia and other fires around the state, Andersen said.

The departure of a high-pressure system will allow coastal air to pour into the Valley from the west, which should push wildfire smoke eastward, he said. However, there’s always a chance for a lull or wind shift that could cause the smoke to spiral back into the Valley. So keep an eye on local air quality conditions if you’re spending time outdoors, Andersen said.

You can check the air quality for any U.S. location at this link.

Hot Times, Summer in the City

Related Story: Breaking This Hot Weather Record Will Not be Cause to Celebrate

As of Wednesday, September’s average temperature was 83.6 degrees. Fresno’s hottest September was in 2012, when the average was 81.3 degrees, according to National Weather Service records.

An End in Sight?

Andersen said that we could yet see more triple-digit weather.

“I kind of feel we may have seen the last of it, but we have known triple-digit days in October,” he said. “And especially with the summer we’re having, I would not want to go out on a limb. Prepare for the worst, and hope for the best.”

There might yet be some light at the end of this overheated tunnel. Andersen said longer-range forecasts include the development of weather patterns in Canada and the Gulf of Alaska that would push colder weather southward into California, “which is typical for fall.”

And maybe some much-needed rain this winter to moisten the drought-parched state?

“Hopefully that’s the case this year,” he said.