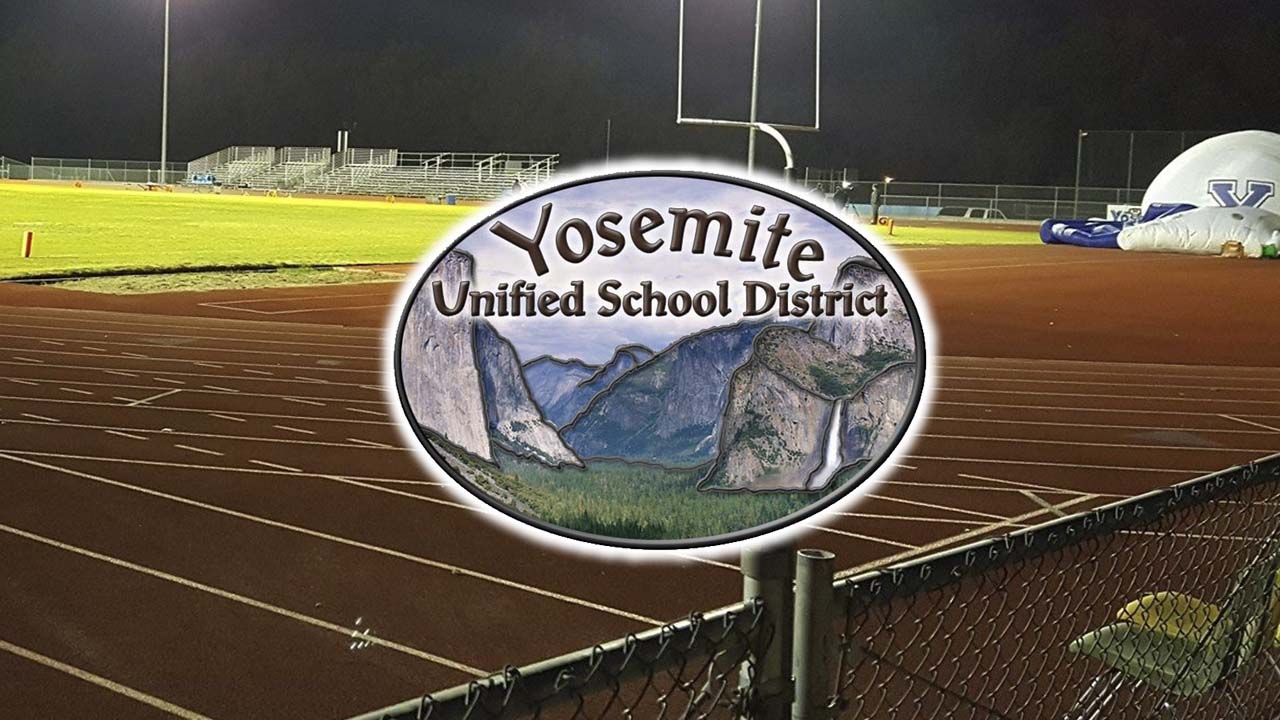 Yosemite High's football stadium will be the site of the outdoors School Board meeting because attendees at Monday's meeting wouldn't wear masks. (GV Wire/Justine Cha)
Share with friends

Yosemite Unified School District trustees will resume their meeting Wednesday evening in the Yosemite High football stadium after Monday’s meeting was adjourned when dozens attendees refused to wear face masks even after sheriff’s deputies were called to the meeting.

A notice posted on Tuesday on the district’s website lists the football stadium as the meeting venue for the meeting that will resume at 6:30 p.m.

The notice is signed by board president Anne Flanagan, who ordered the adjournment of Monday’s meeting that started and ended in the Yosemite High cafeteria in Oakhurst.

Sources told GV Wire that Monday’s meeting was interrupted when attendees were told they needed to comply with the district’s requirement for face masks indoors. When the crowd of parents, who numbered from 80 to 100, refused to don masks, the district called the Madera County Sheriff’s Office.

The arriving deputies, who also were maskless, said they could not enforce the mask rule, so the School Board and staff moved the meeting outside for a public comment period, which included complaints about the mask requirement for students.

The meeting then returned inside and Flanagan said it could continue if children left the meeting room while adults were unmasked. But the children remained and attendees continued to defy the mask rule. The board conducted one final piece of business, a public hearing on the sufficiency of students’ instructional materials, an annual certification required under state law. Flanagan then adjourned the meeting until Wednesday night.

Flanagan, who was appointed to the board in 2019 and won election to a two-year term in November 2020, declined to comment Wednesday and referred questions to Superintendent Glen Billington. He told GV Wire he had never seen anything quite like Monday’s truncated board meeting.

Billington said he’s uncertain why furor over the mask requirement exploded Monday and not at a prior board meeting.

“I think parents are frustrated — and I get that,” he said. “No one likes to wear a mask, but we have to follow our health and safety protocols. It’s the only way to keep our schools open.”

Moving the meeting outdoors on Monday showed the district was making an effort to make sure parents’ concerns were heard, he said.

But the district can’t afford to ignore the mask mandates for schools issued by the California Department of Public Health, particularly since “significant” numbers of Yosemite Unified students have already been quarantined since the start of the school year because they tested positive for COVID-19 or had close contact with someone who was infected with the coronavirus, Billington said.

Mask Rule Not Enforceable by Deputies

Sheriff Tyson Pogue said there seems to be a misunderstanding about the mask requirement — it’s a guidance from the California Department of Public Health, not a law, and thus deputies can’t enforce it.

Pogue said he understands that parents are passionately protective of their children, and Monday’s meeting was emotionally charged. As a result, several deputies will be on hand for Wednesday night’s meeting in case tensions rise again, he said.

Billington said parents and other community members will find seats in the bleachers at the stadium, and the board and staff will be seated on the track area.

Even at times when there is such a sharp divide such as the face mask debate, Billington said he knows the district and parents still all want the same thing: To keep kids in school, learning, and getting the best educational opportunity possible.

“This is not an easy time in schools, having to navigate these turbulent times,” he said. “If we work together, we can come out of this strong.”