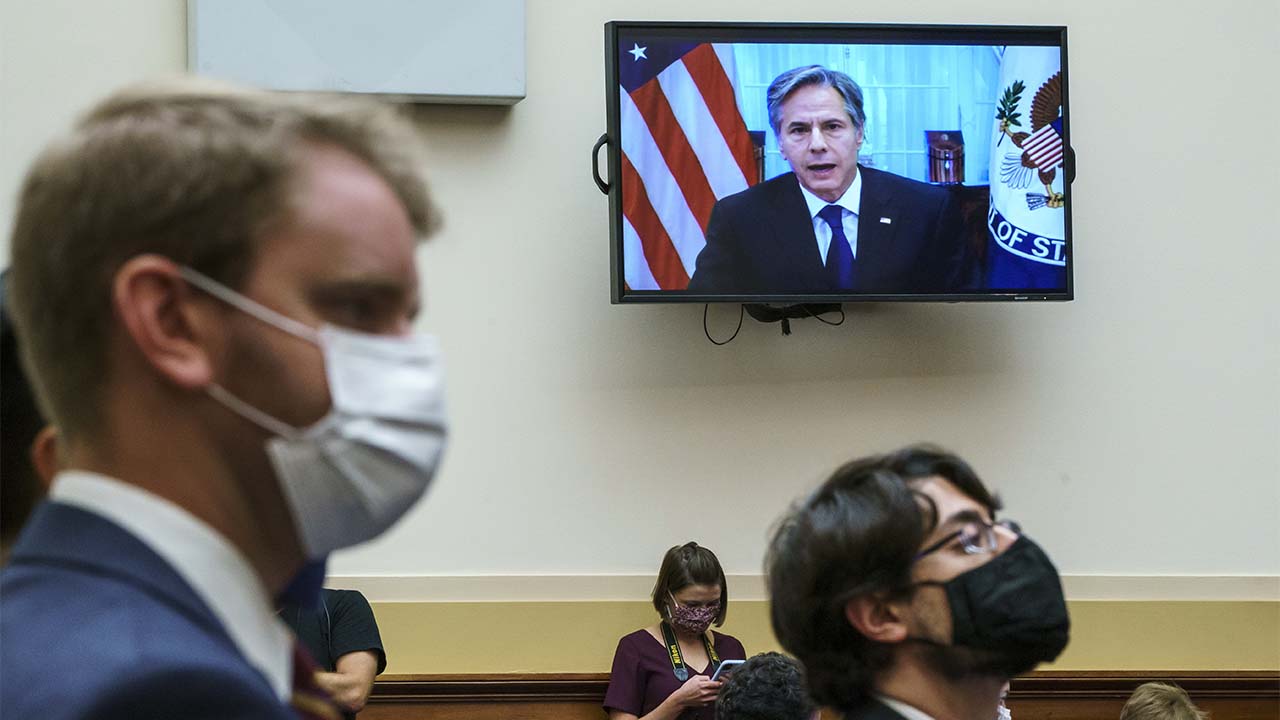 WASHINGTON — Secretary of State Antony Blinken pushed back Monday against harsh Republican criticism of the handling of the military withdrawal from Afghanistan, saying the Biden administration inherited a deal with the Taliban to end the war, but no plan for carrying it out.

In a sometimes contentious hearing Monday before the House Foreign Affairs Committee, Blinken sought to blunt complaints from angry GOP lawmakers about the administration’s response to the quick collapse of the Afghan government and, more specifically, the State Department’s actions to evacuate Americans and others.

Blinken echoed White House talking points blaming the Trump administration for the situation that President Joe Biden inherited in Afghanistan. “We inherited a deadline. We did not inherit a plan,” he said, maintaining that the administration had done the right thing in ending 20 years of war.

“We made the right decision in ending America’s longest-running war,” said Blinken, who will testify on Tuesday before the Senate Foreign Relations Committee.

Republicans savaged the withdrawal process as “a disaster” and “a disgrace.” And while some Democrats allowed that the operation could have been handled better, many used their questions to heap criticism on former President Donald Trump.

The State Department has come under heavy criticism from both sides for not doing enough and not acting quickly enough to get American citizens, legal residents and at-risk Afghans out of the country after the Taliban took control of Kabul on Aug. 15. Some seeking to leave remain stranded there, although Blinken could not provide an exact number. He said roughly 100 U.S. citizens remain along with about “several thousand” green card holders.

“This was an unmitigated disaster of epic proportions,” said Rep. Michael McCaul of Texas, the top Republican on the committee. He said the abrupt withdrawal along with leaving some Americans and Afghans behind had “emboldened the Taliban” and other U.S. adversaries. “I can summarize this in one word: betrayal.”

His GOP colleagues Steve Chabot of Ohio and Lee Zeldin of New York were even more blunt. “This is a disgrace,” Chabot said. “This was fatally flawed and poorly executed,” said Zeldin. “I believe that you, sir, should resign. That would be leadership.”

The chairman of the committee, New York Rep. Gregory Meeks, urged his colleagues to keep politics out of their criticism. But he acknowledged that there had been problems. “Could things have been done differently? Absolutely,” he said.

Blinken tried to calmly deflect allegations of unpreparedness by noting that the Biden administration had inherited a U.S.-Taliban peace deal from its predecessor, along with a languishing program to grant visas to Afghans who had worked for the U.S. government.

Blinken, who had publicly predicted in June that a complete Taliban takeover would not happen “from a Friday to a Monday,” also tried to preempt criticism of the prediction by noting that no one in the U.S. government expected the Afghan government to fall as quickly as it did.

“Even the most pessimistic assessments did not predict that government forces in Kabul would collapse while U.S. forces remained,” Blinken said in prepared remarks released ahead of his appearance. He also defended the evacuation effort, saying it succeeded despite near insurmountable odds.

“The evacuation was an extraordinary effort — under the most difficult conditions imaginable — by our diplomats, military, and intelligence professionals,” he said. “In the end, we completed one of the biggest airlifts in history, with 124,000 people evacuated to safety.”

GOP Doubles Down on Demand to ‘Fire Blinken’

But Republicans, in particular, have been demanding answers as to why American citizens were left behind in the chaotic days and weeks before the military completed its withdrawal on Aug. 30.

In a preview of GOP questions, the Republican National Committee released a statement earlier Monday with the banner headline “Fire Blinken,” demanding that he be held to account for what it described as a litany of failings.

After the more than five-hour hearing concluded, the GOP committee doubled down on its demand.

“Today’s hearing makes Blinken’s failures and lies abundantly clear,” RNC chairwoman Ronna McDaniel said. “Biden has no choice but to fire Blinken, hold him accountable, and take responsibility for the disaster he created.”

Some Republicans appeared to have be spoiling for a fight with the generally unflappable Blinken. Rep. Bryan Mast of Florida accused Blinken of lying when he denied that intelligence had been manipulated to support Biden’s desire to withdraw U.S. troops. “I do not believe a word you have said,” he told Blinken.

Democrats Have Also Been Critical of Biden and Blinken

In a rare show of temper, Blinken replied: “Simply put, what you said congressman, is dead wrong.”

Blinken is very close to Biden and his job as America’s top diplomat is almost certainly safe, but criticism of the administration’s handling of the Afghanistan withdrawal has not been limited to Republicans.

Numerous Democrats have also questioned the policy and expressed concern about stranded Americans, green card holders and Afghans who could face retaliation from the Taliban because of their work or ties to the U.S. government over the past 20 years.

State Department officials have acknowledged that the congressional hearings could be contentious and possibly ugly, but many remain convinced the U.S. military and other officials did the best they could under extremely trying circumstances — including the evacuation of the U.S. Embassy in Kabul and the crush of thousands of desperate people at Kabul’s airport seeking to leave the country.