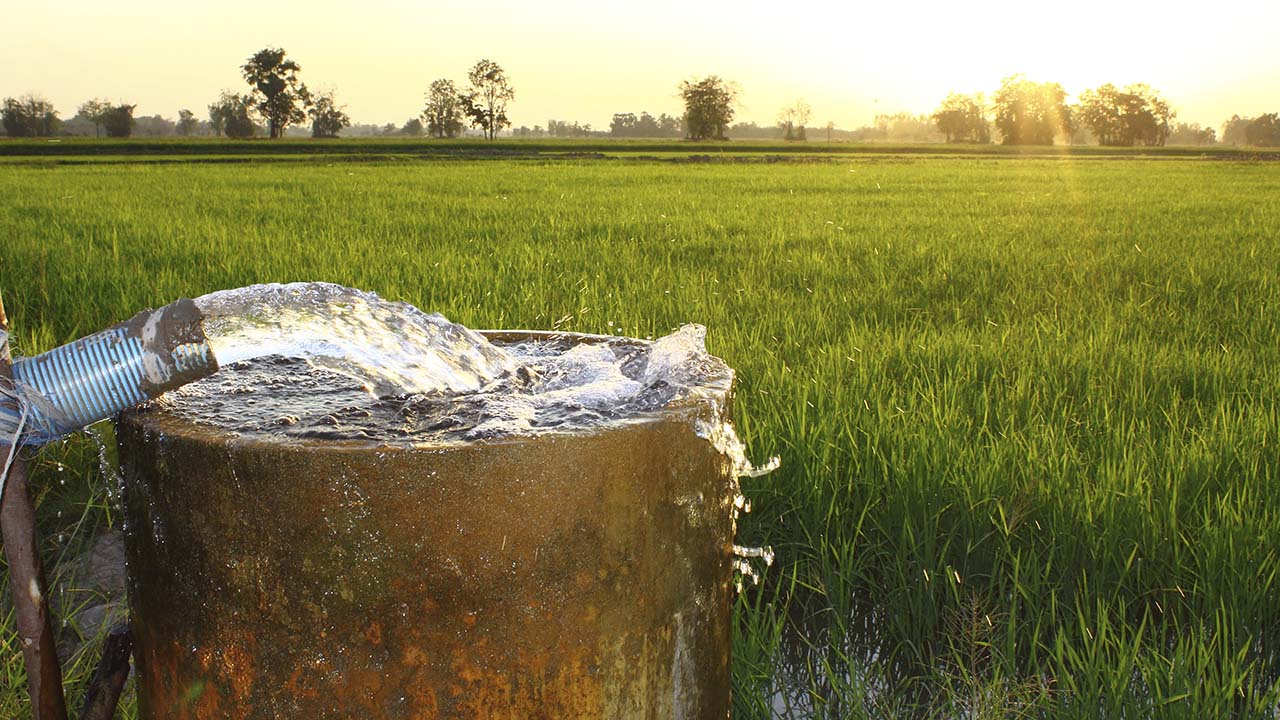 With looming groundwater pumping restrictions, agencies are looking to give growers a way to save water and still earn a profit. (Shutterstock)
Share with friends

Some San Joaquin Valley farmers could someday have a new “crop” to sell — their groundwater.

In the face of looming groundwater pumping restrictions, some groundwater agencies are looking at internal markets to give growers a way to save water and still earn a profit.

These nascent markets are still in the talking and tinkering stages and may take years to get underway. Most of the markets are being worked out by groundwater agencies that were formed under the state’s new Sustainable Groundwater Management Act. The act aims to reduce groundwater pumping and bring the state’s over drafted aquifers into balance by 2040.

That can only happen if groundwater agencies can bring in more water to recharge withered basins or cut back pumping, which means a reduction in productive farmland. Some estimates are that one million acres now being farmed in the Central Valley will have to be idled under SGMA.

So, farmers and groundwater agencies have been looking for creative ways to reduce groundwater demand while keeping agriculture viable.

Buying and selling groundwater, or groundwater credits, didn’t set well at first with Aaron Fukuda, General Manager of the Tulare Irrigation District. The Tulare District is part of a larger market experiment including all three groundwater sustainability agencies in the Kaweah subbasin.

Fukuda worried there could be negative consequences and saw a groundwater market as a way for some people to potentially monetize a necessary resource.

After looking at ways a market could work however, Fukuda is on board and sees the market as an opportunity to “incentivize folks to become good shepherds of water supply.” The research was funded through a $400,000 grant from the Bureau of Reclamation.

The grant is helping pay a consulting agency to establish an “instruction manual” for a market, Fukuda said. A committee composed of members of ag, disadvantaged communities, groundwater agencies and the environmental sector is working with the agency. The first public workshop will probably happen this month, said Fukuda.

The original goal was to build the market framework over three years. That timeline has been accelerated to one year to try and have the tools ready in time for upcoming pumping regulations. After the framework is developed, real-world testing will take place in some parts of the Tulare Irrigation District.

“This is going to be very difficult and very time consuming,” said Fukuda. “In my dreams I’m dreaming about water markets, so that’s very scary now.”

The Madera County Groundwater Sustainability Agency has already approved an allocation for areas covered by the agency that includes an amount of “transitional water.” That is a set amount that is above the sustainable yield for the aquifer. The amount of available transitional water will be reduced by 2% per year for five years and then by 6% a year for the following 15 years.

Growers will have to pump within the constraints of that shrinking pot of transitional water.

The Madera groundwater agency is also looking at a potential groundwater market that could allow farmers to sell their share of the sustainable yield amount as needed.

“This is a way to introduce flexibility into growing water scarcity,” said Stephanie Anagnoson, director of Water and Natural Resources for Madera County. “If you almost have enough water but not quite, you might potentially be able to buy water from someone else to get them what they need.”

Madera County got a $200,000 grant from the Bureau of Reclamation in 2018 to study a groundwater market strategy. It used that money to gauge interest in a market among growers, community groups, conservation representatives and the local groundwater agencies.

It also funded an online market simulation, which is in its seventh month of operation. The simulation will run for another two months. Each month represents a year of water scarcity and landowners submit what they want to buy or sell. After the simulation ends, a consulting firm will summarize results and make recommendations to the county Board of Supervisors.

“We’re reaching the end of the process so it will be interesting to recap in a couple of months,” said Anagnoson. “But if there were to be a market I think it would be several years down the road.”

Before any markets can be established, groundwater agencies first have to establish groundwater pumping allotments and most agencies aren’t at that stage yet.

Hurley said a McMullin groundwater market would allow growers to post amounts of water for sale and buyers would choose from those listings. McMullin has studied various markets under a $193,000 grant it received from the Bureau of Reclamation in 2018.

But any type of market will require measurement which means all wells in McMullin would have to be metered first, something the agency is working on, said Hurley. He expects all wells to have meters by 2025. Once about 50% of wells are metered, the agency can start implementing the market.

“I expect it to be pretty useful to that guy who has trimmed down his planting. Perhaps he’s reduced down to maybe 80% of what his prior crop was. He’s thinking it’s really close but he gets to the end of the year, he just needs that extra few acre feet to bring it home,” said Hurley. “He’ll be really interested in something like this.”

The Rosedale-Rio Bravo Water Storage District in Kern County, was an early groundwater market advocate. The district partnered with the nonprofit Environmental Defense Fund in 2019 to build the framework for an online platform allowing its growers to move groundwater credits.

But like most of the other districts and agencies noted, a real market is still years away. It probably won’t be established until 2023 or 2024, said Markus Nygren, engineer tech for Rosedale-Rio Bravo Water Storage District.

Nygren said building out a fully functioning trading platform will be very costly.

“We’re kind of pumping the brakes a little bit,” he said.

Still, Nygren acknowledged that the drought is putting pressure on many growers and making them realize they will need options as their ability to pump is limited.

“I do know that water is scarce and that these guys are willing to try anything they can,” said Nygren. “It’s really starting to hit them, how bad the water situation is. And that, even if you’re fine for now, at some point something’s going to get tight on the water.”