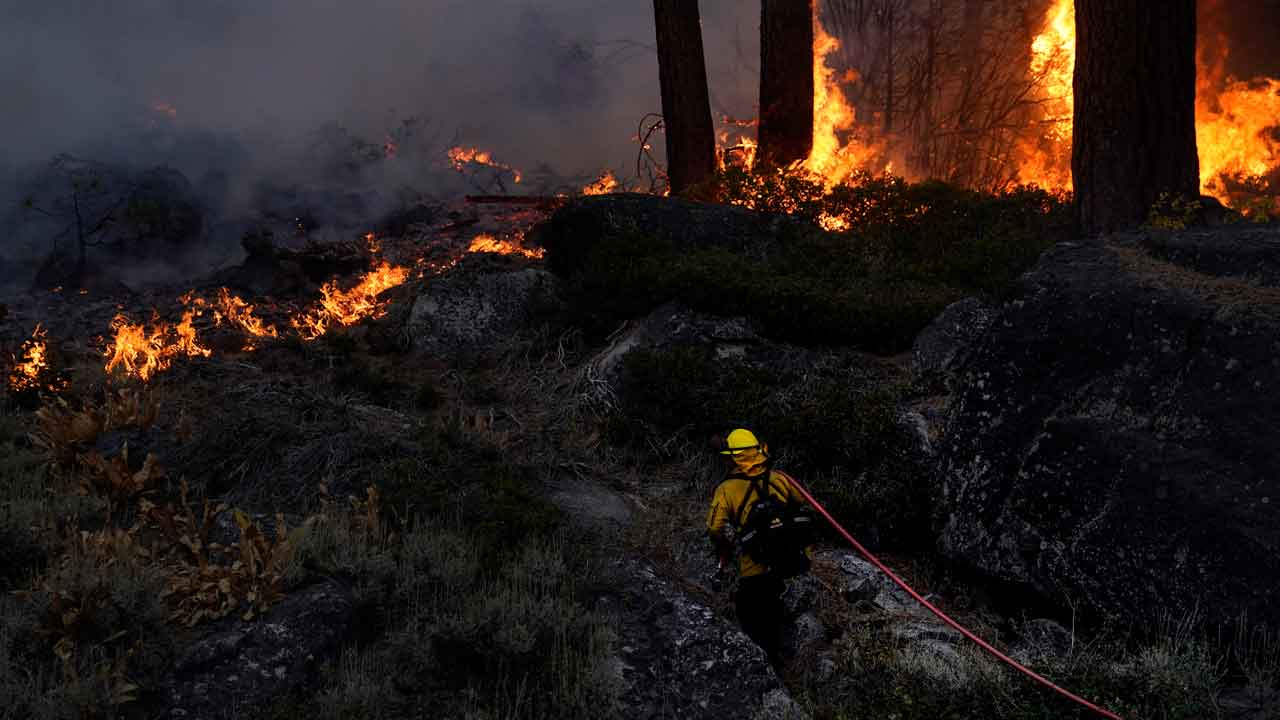 In this file photo, a firefighter carries a water hose toward a spot fire from the Caldor Fire burning along Highway 89 near South Lake Tahoe. (AP Photo/Jae C. Hong)
Share with friends

The lifting of a mandatory evacuation order for South Lake Tahoe’s 22,000 residents is a confident milestone in the fight against the Caldor Fire, but it remains only 48% contained and still threatens areas south of the resort town.

Firefighters are confronting aggressive winds and flames in some southeast sections of the Caldor Fire, which could still reach Meyers, a community more than a mile high known as the gateway to Lake Tahoe, and other areas including the Kirkwood ski resort.

And although the evacuation is no longer mandatory for the smoke-cloaked city on the lake’s south shore, more than 5,000 personnel are still working to protect the surrounding resort communities and the homes of employees who staff casinos, restaurants and ski resorts.

“We’re also looking long term — what’s going to happen, four, five or six days down the road. We want to make sure we’re planning and having stuff ready and completed” before more people can return home, Cal Fire official John Davis said. “And if it comes sooner, we are already in the planning process for the whole area that’s still under evacuation order.”

“I was honestly convinced this place was gonna go down,” Lake Tahoe Community College student Dakota Jones said Monday upon his return. “It was nice to see that I was wrong.”

The Caldor Fire erupted Aug. 14 and was burning as many as 1,000 acres an hour at its peak as it spread across dense forests, tree-dotted granite cliffs and scattered cabins and hamlets in the northern Sierra Nevada. Through tactics including bulldozing defense lines and air-dropping Lake Tahoe water onto the flames, crews successfully carved a perimeter around much of the wildfire.

Fire officials still expect hot spots, but hope to make enough progress to lift more evacuation orders in the coming days. Much depends on the wind, rain and lightning that coming thunderstorms may yield.

Winds have been easing, allowing firefighters to make progress containing the conflagration, but authorities remain concerned about southwest winds sparking spot fires. In Northern California, the weather is expected to cool slightly and the humidity to rise starting on Tuesday.

“We are drier than I have seen on my 20 days on this fire,” Jim Dudley, incident meteorologist, said Monday. “There’s a lot of potential weather-wise for little things to become maybe not so little.”

California and much of the U.S. West have experienced dozens of wildfires in the past two months as the warming, drought-stricken region swelters under dry heat and winds drives flames through vegetation. More than 14,500 firefighters were battling 14 active fires in the state on Monday, and since the year began more than 7,000 wildfires have devoured 3,000 square miles.

No deaths have been reported specifically from the fires, which have shut down all national forests in the state.