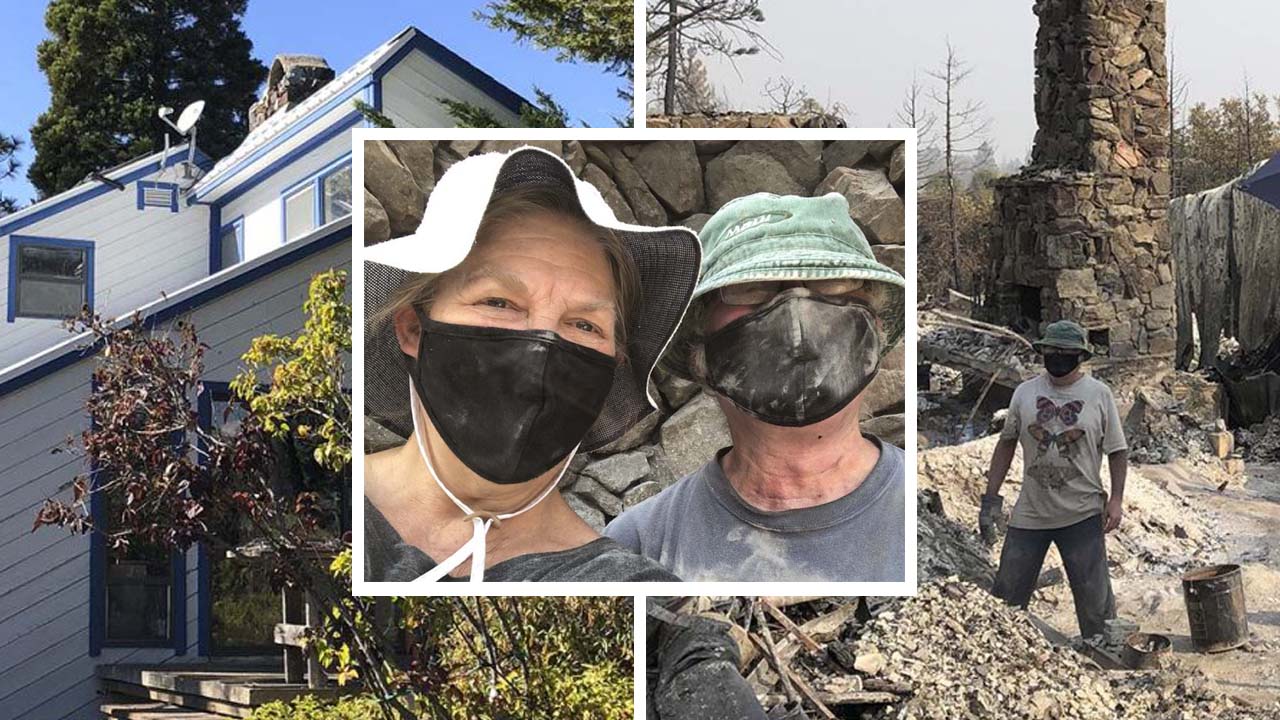 Susan Doering and Dieter Wulfhurst, seen in their cleanup clothes, plan to rebuild. Their old home is at left, the remains are at right. (Photos provided by Dieter Wolfhurst)
Share with friends

Saturday marks the one-year anniversary of the start of the Creek Fire, which destroyed more than 800 buildings and injured 26 people as it swept through the tinder-dry Sierra National Forest and nearby neighborhoods.

In its wake are denuded mountains and hillsides, marked with matchstick-like trees still standing and partly burned trunks in piles and awaiting logging trucks. The blackened earth is a scar that stretches across 593 square miles — more than five times the size of the city of Fresno.

And within those 593 square miles lived thousands of people whose lives were upended by the fire that came roaring up the canyon through Big Creek. 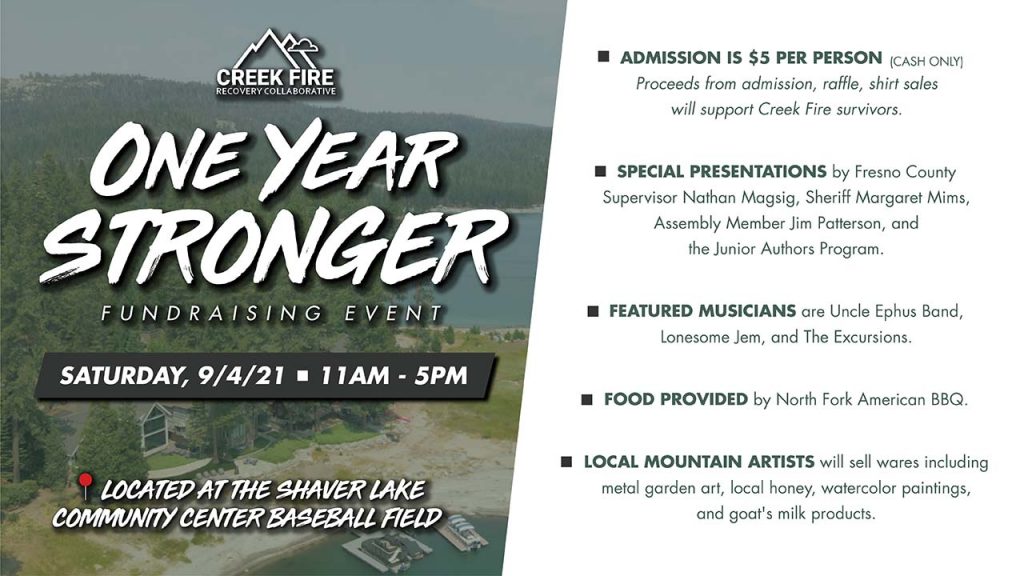 Dieter Wulfhorst says he and his wife Susan Doering count themselves as more fortunate than many of their neighbors, who lost everything and either had no insurance or were underinsured. Homeowner’s insurance will let the couple rebuild their Mile High neighborhood home tucked between Auberry and Pine Ridge on the north side of Highway 168, which was completely destroyed by the fire. They fled with their musical instruments — Wulfhorst plays the cello and Doering the violin — plus passports and other valuable documents, some photos, and their cat Charlie.

They’ve been back up to their homestead site regularly since the fire, sifting through the ashes to find some “miracles,” Wulfhorst said, such as souvenir pottery mugs that escaped unscathed and other items that the fire artistically fused together. It’s been slow-going working with their insurance company, particularly now that so many new fires such as the Dixie and Caldor fires in Northern California are continuing to ravage the state, he said. 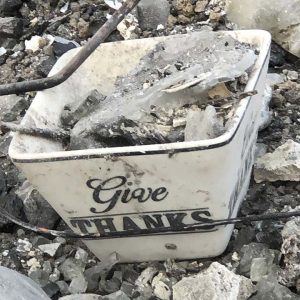 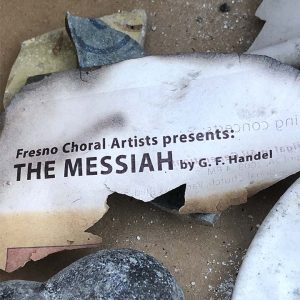 But Wulfhorst said they plan to persevere and build a new home there so they can again enjoy views of already-greening mountain landscapes. For now, they are in a rented home in Clovis after more than 11 months of living on a friend’s farm in Reedley.

When they do return to live in Mile High some things will be different, though. Wulfhorst will be wearing a new tuxedo when he performs — his old one, 80 years old and inherited from a relative — was consumed in the fire. And he said they plan to stay closer to home than in the past, when they traveled extensively as touring musicians, sometimes spending only three nights a month at home.

“Even now we go back on a fairly regular basis and it’s just a spiritual draw,” he said. “The house was really pretty amazing. The first time we actually walked into the house before we even purchased it, we felt this incredible spiritual strength that the house gave us. And the site is beautifully located with a beautiful view. And now it’s amazing how much is growing back, how quickly.

“We still are grieving. And probably will always do that. But we still feel the incredible spiritual draw of the place.”

The loss of their home in Big Creek and most of their possessions gave Wait and his family the opportunity to hit the restart button — and to see a new part of the world.

Wait, who previously was superintendent/principal of Big Creek Elementary School with about 50 students, now heads a K-12 international baccalaureate school in Kuwait with 2,500 students. His wife is awaiting her visa so she can join him and teach first-graders there. Their two younger children also are awaiting visas, while the older ones are in college and are now studying Arabic in addition to their other classes.

Wait said he had been pondering working overseas prior to the fire. When he initially applied for the job in January 2020, the family’s biggest concern was “what will we do with all our stuff?”

He’s not sure he would have opted to uproot from the mountain community where his children had grown up and had all their friends and memories.

“I don’t know if I could have walked away from it,” he said. “But losing your house made this decision that much easier.”

Wait said he took the overseas job because he wanted to expose his family to different cultures and experiences. One of the things he’s learned since coming to Kuwait is that the school’s teachers don’t own homes or cars, so they are not as rooted as Americans typically are. They have the freedom to travel more extensively and don’t have to worry about raking pine needles or mowing grass back home, he said.

And Wait is excited about the teachers his own children will have at the English-language school — a history teacher whose knowledge of ancient Greece is bolstered by his Greek nationality, or the economics teacher from Kenya who can provide insight into the economics of Africa.

But he hasn’t lost touch with his California friends, including school superintendents in fire-ravaged areas of Northern California who are now facing some of the same challenges that Big Creek School faced last year. Wait said he was preparing for a virtual meet-up with the school chiefs to go over some of the lessons he learned, such as the importance of getting kids back with their classmates — even if only online — as soon as possible.

Wait said he’s sad that the state again is having to battle major fires that are affecting thousands of people.

“My heart breaks for people who lost their homes. I know what they are going through.” 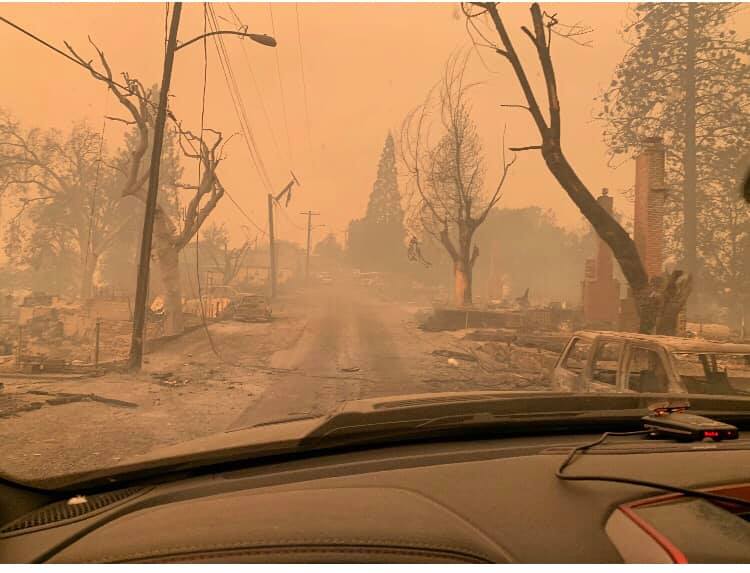 The scene in Big Creek after the fire. (Facebook/Brian Bailey

Adapting to a New World

Nearly a year ago Margo Ortiz and her husband were at the Fresno County Fairgrounds where her three American Paint horses had been evacuated. She was glad her horses were safe but anxious about what she would find when they were finally able to go back up the mountain.

She was one of the lucky ones — her Peterson Road home survived the Creek Fire, which crept within 5 feet of the back of the home.

“And you can see where the firefighters had fought it off from that side,” she said. “And, you know, you can’t thank those people enough.” 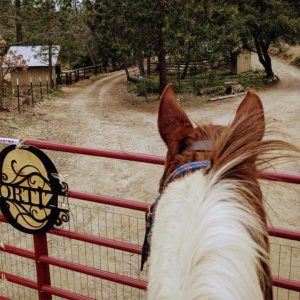 One of Margo Ortiz’s horses takes in the view from the front of her Peterson Road home. (Photo provided by Margo Ortiz)

Other neighbors weren’t so fortunate. Ortiz says that only 12 out of the 100 or so homes on Peterson were spared.

So these days she’s beset with mixed emotions. She’s grateful that her home didn’t burn, but at the same time she’s sad for her many neighbors who either had no insurance, or were underinsured, and are struggling to rebuild.

And she’s also sorrowful that the landscape that drew her to the Fresno County mountains for her retirement has changed so dramatically.

The trees in front of her home are still standing and look much as they did a year ago before the fire broke out. But from the back, where trees burned down or have been cut down, she can now see all the way up to Cressman’s General Store, now operating out of a shipping container, at the top of the Four Lane on Highway 168.

“It’s hard to go in and out every day and see that and see what it’s done. It just breaks your heart. It really does,” Ortiz said. “And you see the people wanting to build, trying to build, and the trees that are gone. It was such a beautiful place before. And now it’s just a whole different scenery.”

She sees fewer deer — “there’s no place for them to hide” — and too many snakes these days. Her horses were so glad to get back home, they ran around the pasture for a half hour. They’re not so glad to go for rides through areas still thick with ash.

The chickens that were left behind survived the fire, and she even inherited some of her neighbor’s chickens and cats after her neighbor’s home burned. But her duck was nowhere to be seen.

“I just tell myself it flew to Shaver Lake and it’s real happy,” she said. 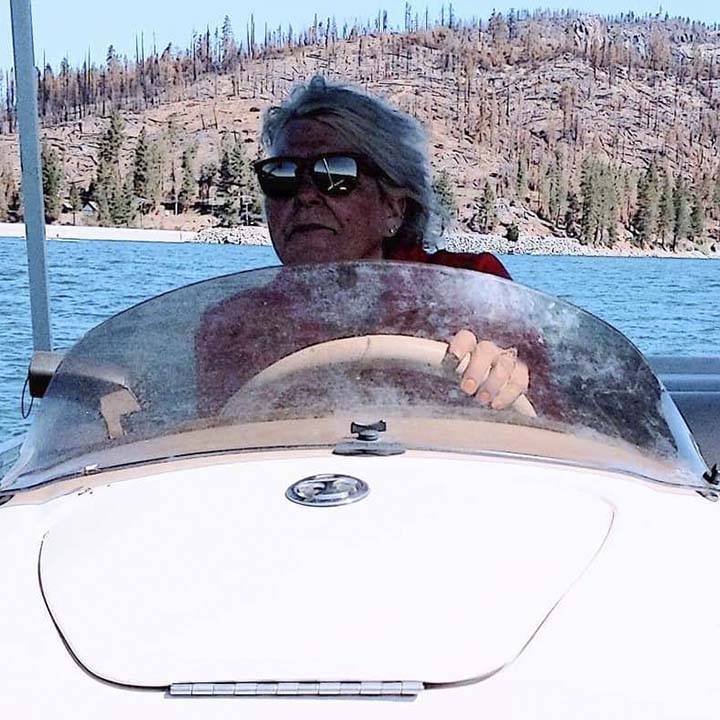 Margo Ortiz at Shaver Lake. Behind her is a fire-ravaged hillside. (Photo provided by Margo Ortiz)