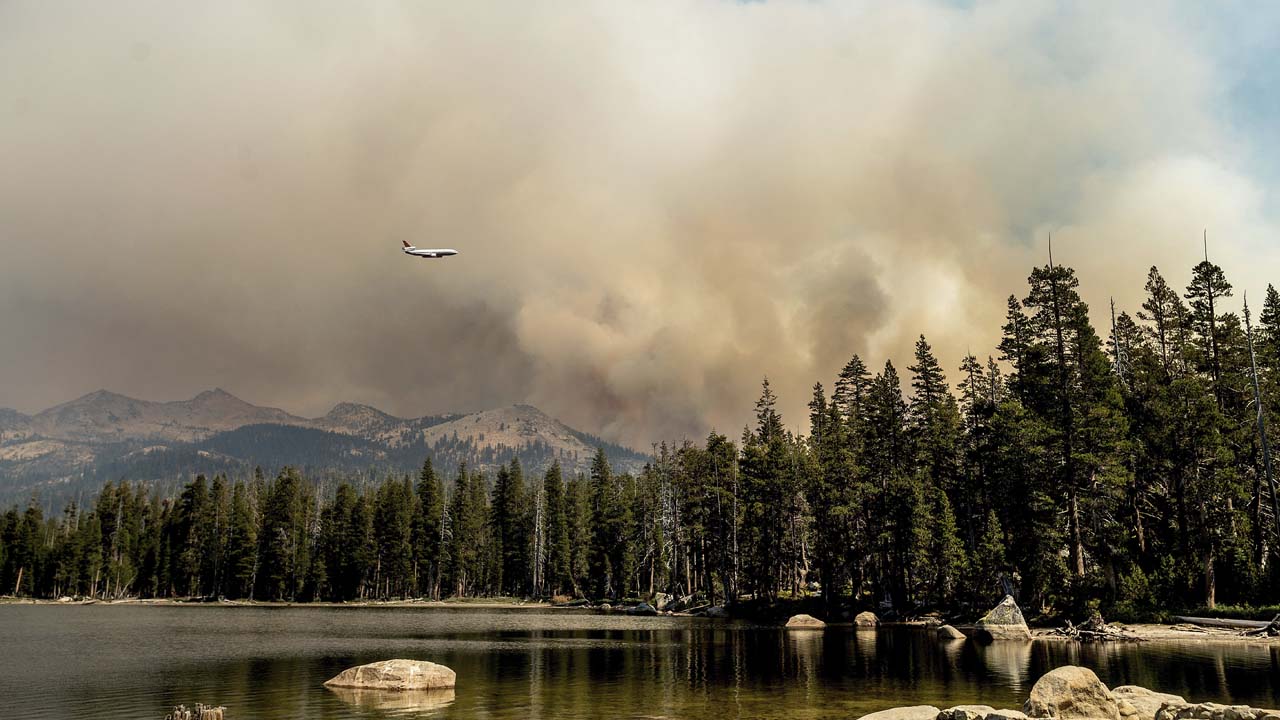 SOUTH LAKE TAHOE — With winds finally turning in their favor, firefighters are throwing all their resources into boxing a California blaze that was scant miles from Lake Tahoe and neighboring Nevada.

Three days of fiercely gusting winds had driven the Caldor Fire east through the rugged Sierra Nevada, forcing tens of thousands of people from the region of forests, mountain hamlets, resorts and alpine lakes.

The winds were expected to calm heading into the weekend, although the humidity remained low and the eastern side of the vast wildfire was still burning trees and running through explosively dry grasslands into rugged areas hard for firefighters to reach, authorities said.

The blaze was also throwing sparks that caught trees and created spot fires up to a mile ahead of the main wall of flames.

“We’re battling what we can battle and waiting for those winds to subside,” said Stephen Vollmer, a fire behavior analyst for the California Department of Forestry and Fire Protection.

Even so, the forecast made fire officials cautiously optimistic.

The change could allow fire crews to get into densely forested areas to begin clearing toppled trees and branches that had blocked routes to remote communities, thus making it safer for evacuees to return, Vollmer said.

Fire crews from around the country were being thrown into the fight against the fire, which was just 23% contained after destroying at least 700 homes and other buildings since breaking out Aug. 14.

Climate change has made the West much warmer and drier in the past 30 years and will continue to make weather more extreme and wildfires more frequent, destructive and unpredictable, scientists say.

The Caldor Fire threatened at least 33,000 more homes and structures. On Wednesday, firefighters were ferried by boat to protect cabins at Echo Lake, a few miles south of Tahoe.

Heavenly Mountain Resort, Tahoe’s largest ski area, was being used as a staging area by firefighters. The resort also brought out its big guns — snow-making devices that were being used to hose down buildings.

One spur of the fire was roughly 3 miles south of the recently evacuated city of South Lake Tahoe, moving northeast toward the California-Nevada state line, authorities said.

Crews worked to keep flames away from urban communities, where houses are close together and shopping centers, hotels and other structures would provide even more fuel.

Thick smoke has enveloped the city of South Lake Tahoe, which is all but deserted at a time when it would normally be swarming with tourists.

After casinos and stores closed on the Nevada side on Wednesday morning, evacuation holdouts lacking cars lined up outside the Montbleu resort and casino in Stateline, awaiting a bus to Reno.

Kevin O’Connell, a disabled plumber from South Lake Tahoe, planned on staying and riding out the evacuation order. But he went to the 7-11 down the street in Stateline and saw even stores there had closed.

“I called 911 and told them I need to get out of here — I have no food, no cigarettes and I’m disabled. And within a couple hours, the police came and picked me up in my apartment and brought me here,” he said, wearing ski goggles to protect his eyes from the blowing ash.

Reinforcements Sent in to Help With Fire Containment Efforts

On Wednesday, President Joe Biden issued a federal emergency declaration and ordered federal assistance to supplement state and local resources for firefighting efforts and relief for residents in four counties affected by the fire.

More than 15,000 firefighters, with help from out-of-state crews, were battling dozens of California blazes, including another monstrous blaze in the same area.

Maj. Gen. David Baldwin, adjutant general of California, said the state has also deployed more than 1,000 National Guard soldiers, airmen and sailors and 10 other states have sent around 1,250 additional Guard members. Many of those are providing air support, including 23 aircraft, some equipped with water buckets, others with systems that can drop fire retardant.

About 65 miles north of the Lake Tahoe-area blaze, the Dixie Fire is the second-largest wildfire in state history at about 1,320 square miles. The weeks-old fire prompted new evacuation orders and warnings this week and was just over 50% contained.