Should Fresno Schools Honoring Men with Racist Histories be Renamed? 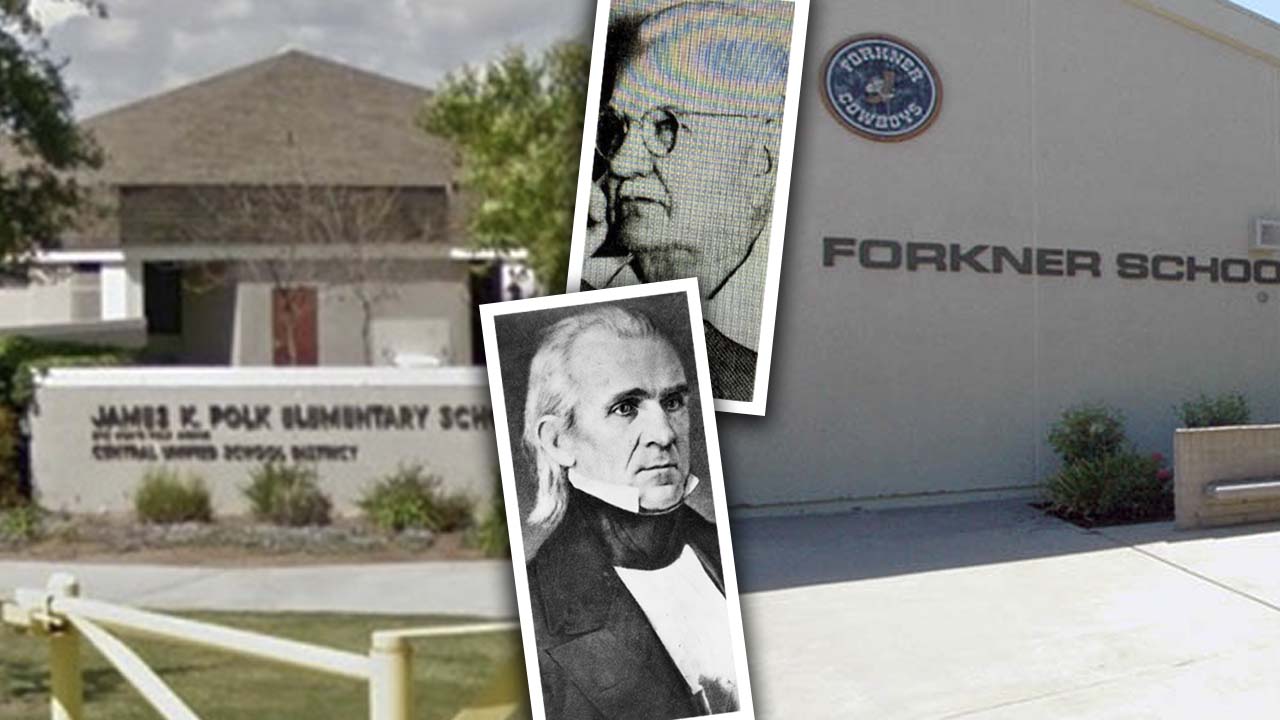 One elementary school in Fresno is named after a racist, slave-owning U.S. president. A few miles away is an elementary school named for a longtime Fresno developer whose race-based deed restrictions kept Armenians and others from buying homes in certain neighborhoods.

But Central trustees aren’t ready to take on the Polk renaming quite yet. On Tuesday, the board members will consider creating a special committee of parents, students, district employees, and community members to consider the names and mascots at all the district’s schools.

It’s the offshoot to a yearlong campaign by Polk student Malachi Suarez to take Polk’s name off his school. Malachi’s campaign began as a class project and then, through an online petition and the support of his family and community members, gradually gathered steam over the past year.

But despite Malachi’s eloquence at several board meetings in asserting why the name should be changed, the trustees did not take a vote. Instead, after hearing from supporters as well as opponents of the name change, the Pioneers, board president Yesenia Carrillo in July proposed creating a committee to examine all school names and mascots. The School Board approved the proposal.

The Forkner renaming effort, apparently now headed by Fresno developer Ed Kashian, was sparked by the trustees’ decision to name the new alternative education campus at 10th Street and Ventura Avenue after local philanthropists Francine and Murray Farber instead of H. Roger Tatarian, a Fresno-bred newsman who left home to head United Press International and then returned to teach at Fresno State and train young journalists.

When the trustees opted to name the campus for the Farbers, who have underwritten several programs benefitting Fresno Unified students, writer/journalist Mark Arax and other members of the city’s Armenian community started a lobbying effort to replace Forkner’s name with Tatarian’s on the northwest Fresno elementary.

At a board meeting in early June, Arax quoted from a home sale’s legal documents that forbid use or occupancy by “Asiatics, Mongolians, Hindus, Negroes, Armenians or any natives or descendants of the Turkish Empire.” The purchaser agreed “not to lease, sell or convey … the whole or any portion of said property to any Armenian or to any descendant of an Armenian or to any lineal descendant of an Armenian, save and except those employed as servants by the residents.”

But when Forkner was looking in the 1920s to buy fig trees for Fig Garden — his new “suburban Fresno” development that Forkner promoted as having rigid sales restrictions that would fully protect homeowners “from resale to undesirables” — he turned to Henry Markarian, an Armenian known as the “Fig King,” Arax told the board.

He and others noted that the district, which has a large Armenian community, has no schools named after an Armenian-American.

On Wednesday’s Fresno Unified School Board agenda is a presentation by Kashian, including a June 21 letter from him to board president Valerie Davis asking that the name change request “be fulfilled without review by committee, nor public debate.”

Kashian’s presentation for Wednesday’s board meeting names some of the better-known members of Fresno’s Armenian community, including author William Saroyan, basketball coach Jerry Tarkanian, and TV newswoman Stefani Booroojian, whose contributions have had local, national, and worldwide impact.

“It is incumbent upon all of us to recognize when something is wrong and that a change is required to be made and made decisively when it is raised in the public square,” Kashian said in his letter to Davis. “There are so many wonderful elements that weave together the fabric of this community. One of those elements is the value that when we see something wrong, we make it right. The case has been laid before us with the naming of this school. To the greatest degree possible, I ask your Board of Trustees to make this change as soon as possible.”

According to the staff report linked to Kashian’s presentation, the board does not now have a policy for renaming schools.

Fresno Unified’s board meeting is scheduled to begin at 5:45 p.m. Wednesday in the downtown Education Center at M and Tulare streets. The meeting also will be livestreamed on cable television stations and on the district’s website.

Central Unified, which also lacks a school renaming policy, could embark on a months-long process to consider the existing school names and mascots under the timeline proposed for consideration at Tuesday’s board meeting.

If approved by the trustees, the Naming Committee would develop an Equity Analysis Protocol to study school names and mascots by November, conduct a study by January, conduct stakeholder sessions with students and community members by February and March, make a recommendation to the School Board by April, and develop a recommendation for future procedures for naming schools and other buildings and selecting mascots by May.

The open session of Central’s board meeting is scheduled to begin at 7 p.m. Tuesday in the Wayne “Hondo” Hodge Performing Arts Center at Central East High School. The meeting also will be carried online on the district’s YouTube channel.