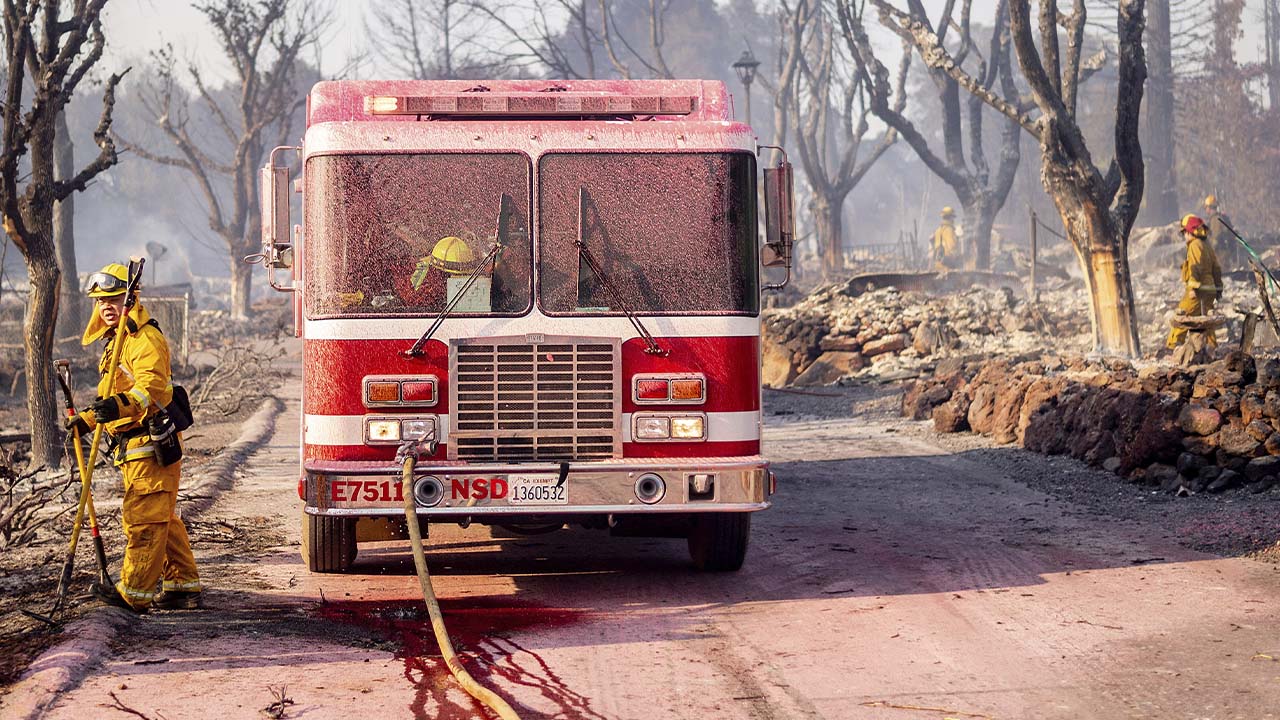 Fire retardant coats a fire truck after the Cache Fire on Wednesday in Clearlake. (AP Photo/Noah Berger)
Share with friends

GRIZZLY FLATS — A small wildfire swept through a mobile home park, leaving dozens of homes in ashes, the latest in a series of explosive blazes propelled by gusts that have torn through Northern California mountains and forests.

The drought-parched region was expected to see red flag warnings for dangerously high winds and hot, dry weather through Thursday.

Those conditions have fed a dozen uncontrolled wildfires, including the month-old Dixie Fire and the nearby Caldor Fire in the northern Sierra Nevada that incinerated much of the small rural towns of Greenville and Grizzly Flats.

No deaths have been reported despite the speed and damage of the blazes.

On Wednesday, a grass fire driven by winds up to 30 mph (48 kph) destroyed dozens of mobile homes in Lake County and injured at least one resident before firefighters stopped its progress, fire officials said at an evening briefing.

Rows of homes were destroyed on at least two blocks and television footage showed crews dousing burning homes with water. Children were rushed out of an elementary school as a field across the street burned.

Some 1,600 people were ordered to flee, with Lake County Sheriff Brian Martin warning of “immediate threat to life and property.”

Lake County has experienced repeated wildfires in the past decade that have destroyed hundreds of homes.

At least 16,000 other homes remain threatened by California wildfires, which are among some 100 burning throughout a dozen Western states, fire officials said.

Tens of thousands of people remain under evacuation orders.

No deaths have been reported, despite the speed and ferocity of the blazes, which have at times created their own erratic winds from heated air swirling into smoke clouds. Flames also have leapfrogged miles ahead of the front lines as winds scattered embers, hot ash and chunks of wood into dry vegetation, said Thom Porter, chief of the California Department of Forestry and Fire Protection.

“This is not going to end anytime soon,” he said of the Dixie Fire. “Everybody’s going to be sucking smoke for a long time.”

Fire crews were able to make some progress on the Dixie Fire Wednesday, increasing containment to 35%, and some evacuation orders were lifted in Plumas and Tehama counties, where some people hadn’t seen their homes for a month.

But the Dixie and Caldor fires still menaced many small clusters of homes within and around national forests along with larger communities, including Pollock Pines, with a population of 7,000 and Susanville, population 18,000, which is the seat of Lassen County.

The Dixie Fire is the first on record to have burned all the way across the Sierra Nevada, starting on the western slopes of the mountain range and moving over the crest to the eastern side. It had burned more than 1,000 square miles (2,590 square kilometers) and was only a third contained.

On Wednesday, dozens of fire engines and crews were transferred from that battle to fight the Caldor Fire, which exploded through heavy timber in steep terrain since erupting over the weekend southwest of Lake Tahoe.

The fire has blackened nearly 220 square miles (570 square kilometers) and on Tuesday ravaged Grizzly Flats, a community of about 1,200.

Dozens of homes burned, according to officials, but tallies were incomplete. Those who viewed the aftermath saw few homes standing. Lone chimneys rose from the ashes, little more than rows of chairs remained of a church and the burned out husks of cars littered the landscape.

Chris Sheean said the dream home he bought six weeks ago near the elementary school went up in smoke. He felt lucky he and his wife, cats and dog got out safely hours before the flames arrived.

“It’s devastation. You know, there’s really no way to explain the feeling, the loss,” Sheean said. “Maybe next to losing a child, a baby, maybe. … Everything that we owned, everything that we’ve built is gone.”

California’s wildfires are on pace to exceed the amount of land burned last year — the most in modern history. The blazes also have destroyed areas of the timber belt that serve as a centerpiece of the state’s climate reduction plan because trees can store carbon dioxide.

“We are seeing generational destruction of forests because of what these fires are doing,” Porter said. “This is going to take a long time to come back from.”

Most of the fires this year have hit the northern part of the state, largely sparing Southern California, which was expected to see clouds and even a chance of drizzle in some areas Thursday. Fire conditions in the region are expected to get worse in the fall.