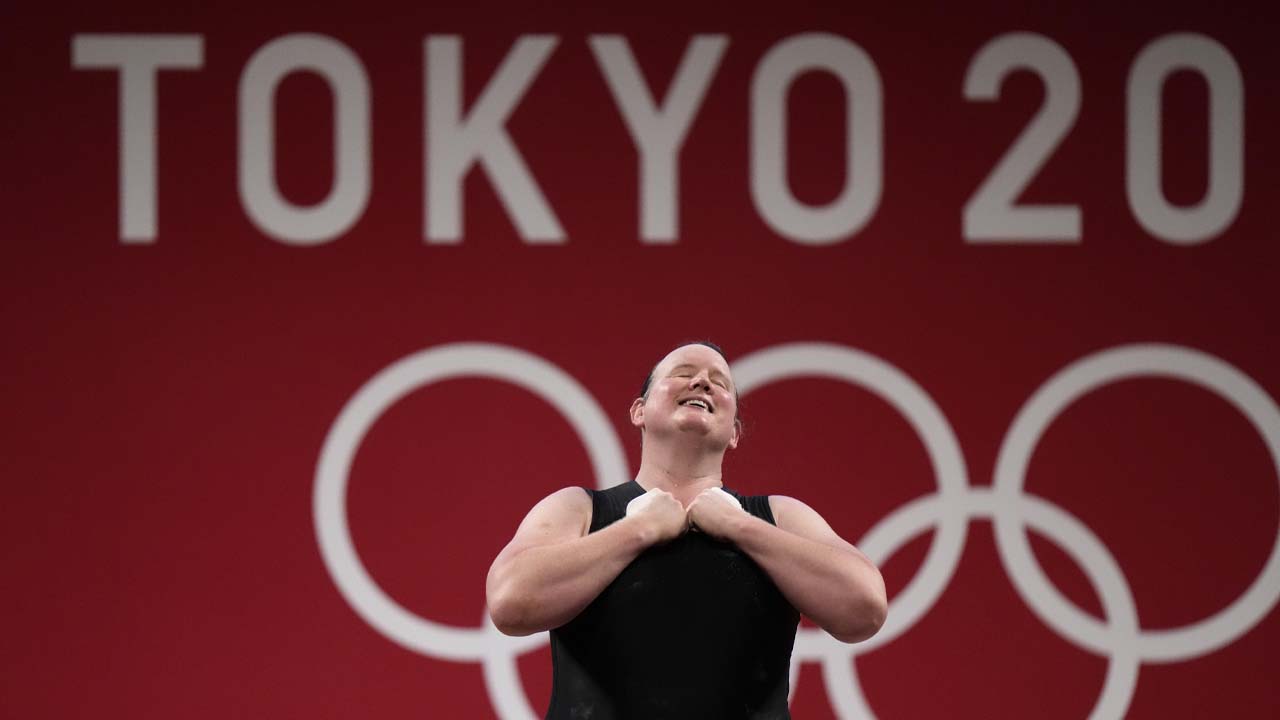 Laurel Hubbard says "Thank you" and bows after a lift, at the 2020 Tokyo Summer Olympics. (AP Photo/Luca Bruno)
Share with friends

TOKYO — Transgender weightlifter Laurel Hubbard finally got to compete at the Tokyo Olympics.

It didn’t last long, but it was significant. Hubbard couldn’t complete any of her first three lifts on Monday night, ruling her out of medal contention in the women’s over-87-kilogram division that ultimately was won by China’s Li Wenwen.

Hubbard made a heart gesture to the audience with her hands before leaving the competition arena.

A Pioneer for Transgender Athletes

Even without completing a lift, she was a pioneer for transgender athletes.

While the New Zealander isn’t the only transgender athlete competing at the Tokyo Games, she has been out for years and has been the focus of attention as a medal contender in weightlifting.

“Of course, I’m not entirely unaware of the controversy which surrounds my participation in these Games,” Hubbard said after exiting the competition. “And, as such, I’d particularly like to thank the IOC, for, I think, really affirming their commitment to the principles of Olympism, and establishing that sport is something for all people. It is inclusive. It is accessible.”

Hubbard also thanked the International Weightlifting Federation, because “they too have shown that weightlifting is an activity that’s open to all of the people in the world,” and the people of Japan for hosting the Games under extraordinary circumstances during the COVID-19 pandemic.

Hubbard received applause and also applauded her fellow athletes when they were introduced on stage. Returning to compete, she took a moment to close her eyes, smile and take a deep breath. She overbalanced on her opening weight of 120 kilograms, taking the bar behind her shoulders.

Her second effort of 125 kilograms — a weight Hubbard has often managed in previous competitions — was ruled invalid on a majority decision by the referees. With New Zealand teammates and staff calling out encouragement, the third attempt was almost a repeat of the first.

Athletes are eliminated if they do not record at least one valid lift in each of the two parts of the competition.

Li’s victory gave China its seventh gold medal in weightlifting at the Tokyo Games. Her rivals never got close to the 320-kilogram winning total, with Emily Campbell finishing 37 kilograms behind to take silver. She became the first British woman to win a weightlifting medal.

Sarah Robles of the United States repeated her bronze from 2016 with 282, becoming the first U.S. woman with two weightlifting medals. Robles was challenging for second place, but had her last lift ruled invalid for elbow movement. “The refs should be doing their jobs so they’re doing it. It is really, really strict but if there’s anytime to be strict, it should be at the Olympics,” Robles said.

The International Olympic Committee in 2015 drew up a set of recommendations for including transgender athletes. Many sports bodies, including the IWF, have implemented similar policies based on those recommendations. Different sports are allowed to set their own specific policies.

In weightlifting, that includes a requirement for athletes to show their testosterone is below a certain level after transitioning, a requirement which Hubbard met. She won a silver medal at the 2017 world championships but had not competed for 1 1/2 years before Tokyo because the coronavirus pandemic hit the competition schedule.

“My performance wasn’t what I had hoped but I’m humbled by the support I’ve received from so many people around New Zealand,” Hubbard said in a statement released by the New Zealand team.”

The IOC will release a new “framework” for transgender athletes’ eligibility in the coming months. That document is expected to take into account newer scientific studies published since the last major review in 2015. That will form a basis for sports to draw up their own updated policies.

Balancing Human Rights and Fairness on the Field

The New Zealand Olympic Committee recognized the sometimes-bitter discussions over what conditions should apply for transgender athletes to compete.

“We acknowledge that gender identity in sport is a highly sensitive and complex issue requiring a balance between human rights and fairness on the field of play,” the NZOC said.

“The New Zealand team is committed to supporting all eligible New Zealand athletes at the Olympic Games, ensuring their mental and physical wellbeing as they compete on the world stage.” Earlier Monday, Wang Zhouyu won the women’s 87-kilogram category for the first of China’s two weightlifting gold medals of the day. Wang won with a total of 270 kilograms. Tamara Salazar won the silver for Ecuador with a total 263, and Crismery Santana took the bronze with 256 for the Dominican Republic.