'This Is How I'm Going to Die': Officers Tell Jan. 6 Stories 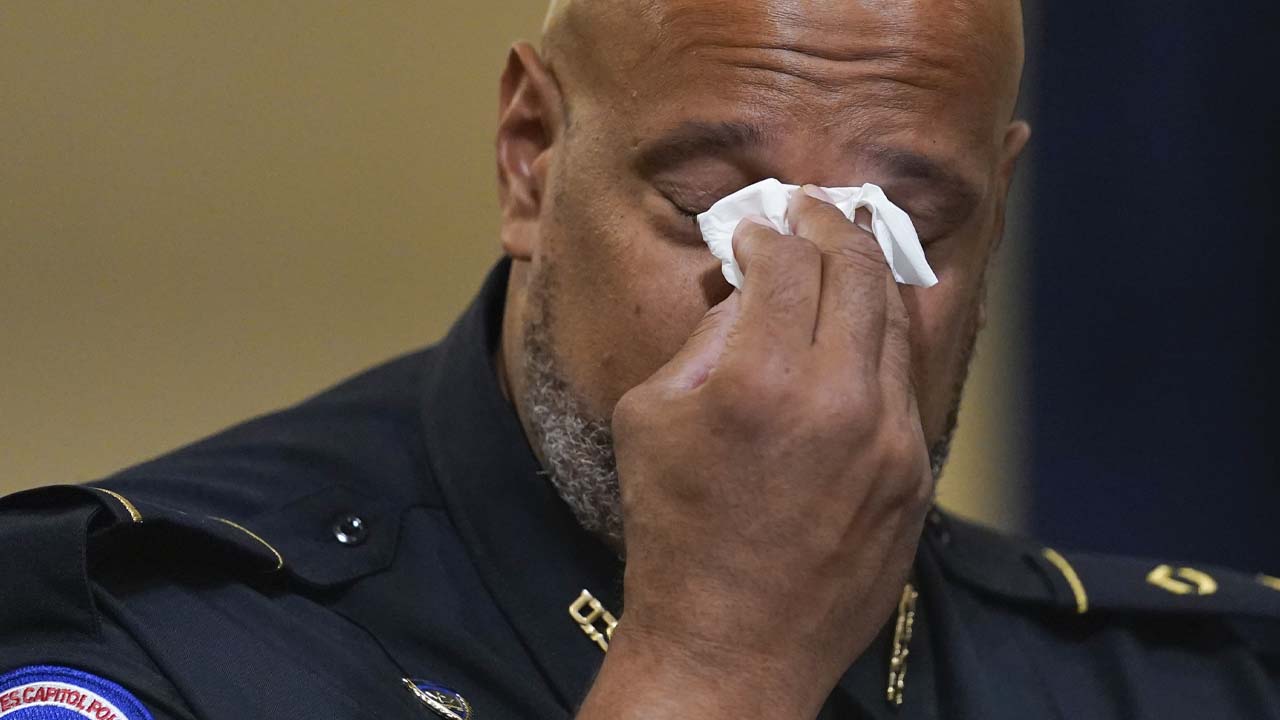 WASHINGTON — “This is how I’m going to die, defending this entrance.”

Capitol Police Officer Aquilino Gonell told House investigators Tuesday he could feel himself losing oxygen as he was crushed by rioters – supporters of then-President Donald Trump – as he was defending the Capitol during the Jan. 6 insurrection.

Metropolitan Police Officer Michael Fanone, who rushed to the scene, told the new House committee investigating the attack that he was “grabbed, beaten, tased, all while being called a traitor to my country.” Doctors later told him he’d had a heart attack.

Daniel Hodges, also a D.C. police officer, said he remembers foaming at the mouth as rioters crushed him between two doors and bashed him in the head with his own weapon, injuring his skull.

“I did the only thing I could do, scream for help,” Hodges said.

Capitol Police Officer Harry Dunn said one group of rioters, perhaps 20 people, screamed the n-word at him as he was trying to keep them from breaching the House chamber.

Officers Give Their Accounts of the Attack

The four officers gave emotional, occasionally angry, accounts of the attack, in which they were beaten and verbally abused as the mob of Trump’ supporters overwhelmed them, broke through windows and doors and interrupted the certification of Democrat Joe Biden’s presidential win. The new committee is launching its probe with a focus on the law enforcement officers who protected them — an effort by the panel to put a human face on the violence of the day.

Tensions on Capitol Hill have only worsened since the insurrection, with many Republicans playing down, or outright denying, the violence that occurred and denouncing the Democratic-led investigation as politically motivated. Democrats are hoping to win public support for the probe by reminding people how brutal it was, and how the law enforcement officers who were sworn to protect the Capitol suffered serious injuries at the hands of the rioters.

The officers emotionally detailed the horror of their experiences, their injuries and the lasting trauma as they begged the lawmakers to investigate the attack. They wiped away tears and paused to compose themselves as they spoke.

Rebuking Republican lawmakers who have resisted the hearings, Fanone said, “I feel like I went to hell and back to protect them and the people in this room.”

Pounding his fist on the table in front of him, he said, “Too many are now telling me that hell doesn’t exist or that hell actually wasn’t that bad. The indifference shown to my colleagues is disgraceful.”

The panel’s chairman, Mississippi Rep. Bennie Thompson played video of the attack and told the police officers: “History will remember your name.” He said the rioters “came ready for a fight, and they were close to succeeding.”

Thompson added: “There’s no place for politics and partisanship in this investigation.”

Wyoming Rep. Liz Cheney, one of two Republicans on the panel, gave opening remarks after Thompson — an effort by Democrats to appear as bipartisan as possible. She expressed “deep gratitude for what you did to save us” and said they would not be forgotten.

“The question for every one of us who serves in Congress, for every elected official across this great nation, indeed, for every American is this: Will we adhere to the rule of law, respect the rulings of our courts, and preserve the peaceful transition of power?” Cheney asked. “Or will we be so blinded by partisanship that we throw away the miracle of America?”

The House Republican leader, Kevin McCarthy, withdrew the participation of other Republicans last week after Democratic House Speaker Nancy Pelosi rejected two of them, saying their “antics” in support of Trump, and his lies that he won the election, weren’t appropriate for the serious investigation. Monday evening, the House voted against a resolution offered by the GOP leader to force his chosen members onto the panel.

McCarthy has stayed close to Trump since the insurrection and has threatened to pull committee assignments from any Republican who participates on the Jan. 6 panel. He has called Cheney and Illinois Rep. Adam Kinzinger, who is also sitting on the committee, “Pelosi Republicans,” which Cheney has dismissed as “childish.”

Ahead of the hearing on Tuesday, McCarthy again called the process a “sham” and said Pelosi only wants the questions asked “that she wants asked.”

McCarthy told reporters that Pelosi should be investigated for her role in the security failures of the day but ignored questions about Senate Republican Leader Mitch McConnell, who had identical authority over the Capitol Police and Capitol security officials.

Trump’s Role and Security Failures to Be Investigated

Thompson aid the hearing will “set the tone” of the probe, which will examine not only Trump’s role in the insurrection but the groups involved in coordination before the attack, white supremacists among them.

It will also look at the security failures that allowed hundreds of people to breach the Capitol and send lawmakers running for their lives. Some of those who broke in were calling for the deaths of Pelosi and then-Vice President Mike Pence, who was hiding just feet away from the mob.

Outside of a committee preparation session for the hearing on Monday, Kinzinger told reporters that “for too long, we’ve been pretending that Jan. 6 didn’t happen.” He said he never expected to be in this position, “but when you have these conspiracies that continue to thrive, when you have lies and misinformation that continue to thrive, it’s essential for us as members of Congress to get to the answers.”

Shortly after the insurrection, almost every Republican denounced the violent mob — and some criticized Trump himself, who told his supporters to “fight like hell” to overturn his defeat. But many have softened their tone in recent months and weeks.

And some have gone further, with Georgia Rep. Andrew Clyde saying a video of the rioters looked like “a normal tourist visit” and Arizona Rep. Paul Gosar repeatedly saying that a woman who was shot and killed by police as she was trying to break into the House chamber was “executed.” Others have falsely claimed that Democrats or liberal groups were responsible for the attack.

The officers testifying have become increasingly politically active in recent months, and went from office to office in May to lobby Senate Republicans to support an outside commission to investigate the insurrection. The Senate GOP ultimately rejected that effort, though that panel would have been evenly split between the parties.