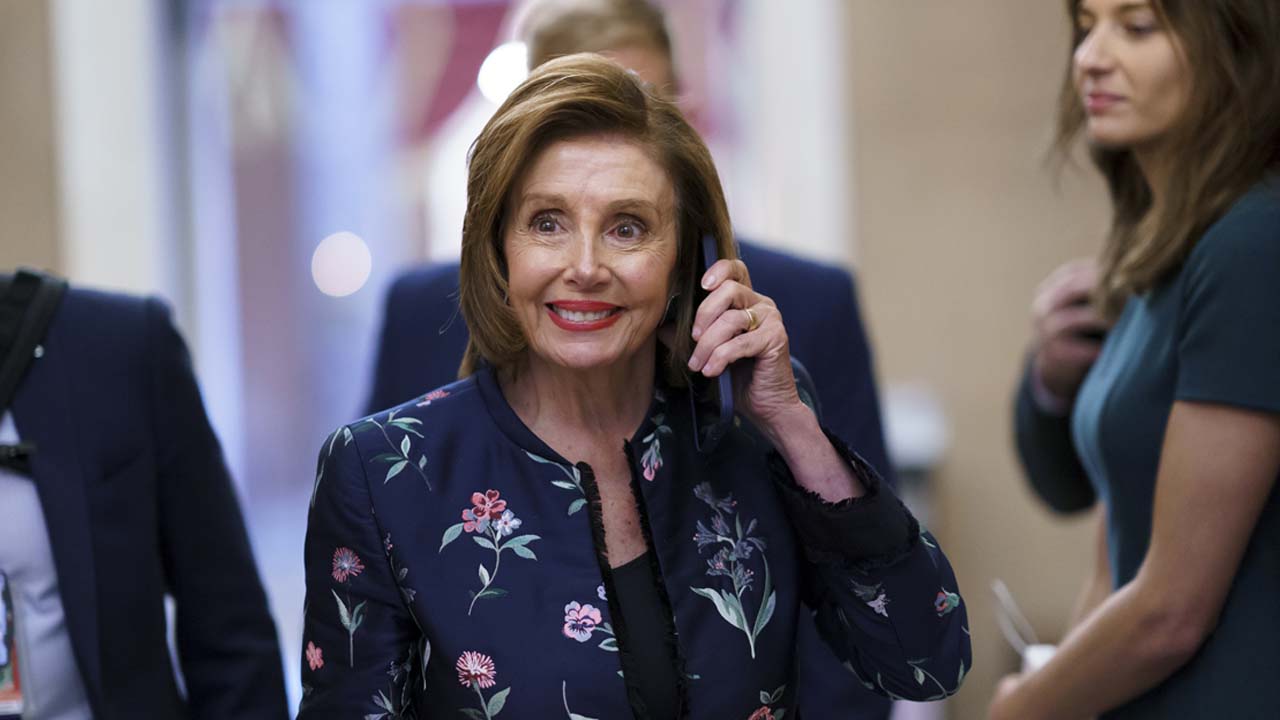 Speaker of the House Nancy Pelosi is preparing for the start of hearings next week. (AP Photo/J. Scott Applewhite)
Share with friends

WASHINGTON — Unfazed by Republican threats of a boycott, House Speaker Nancy Pelosi declared that a congressional committee investigating the Jan. 6 Capitol insurrection will take on its “deadly serious” work whether Republicans participate or not.

The Republicans’ House leader, Kevin McCarthy, called the committee a “sham process” and suggested that GOP lawmakers who take part could face consequences. McCarthy said Pelosi’s rejection of two of the Republicans he had attempted to appoint was an “egregious abuse of power.”

The escalating tension between the two parties — before the investigation has even started — is emblematic of the raw partisan anger that has only worsened on Capitol Hill since then-President Donald Trump’s supporters laid siege to the Capitol and interrupted the certification of Joe Biden’s presidential election victory. With most Republicans still loyal to Trump, and many downplaying the severity of the violent attack, there is little bipartisan unity to be found.

McCarthy said Wednesday that he would withdraw the names of all five Republicans he had appointed after Pelosi rejected two of them, Reps. Jim Banks of Indiana and Jim Jordan of Ohio. Pelosi made clear on Thursday that she won’t relent, and Democrats mulled filling the empty seats themselves.

“It is my responsibility as the speaker of the House to make sure we get to the truth of this, and we will not let their antics stand in the way of that,” Pelosi said of the Republicans.

It is unclear, for now, whether Pelosi will try to appoint more members to the select panel, as she has the authority to do under committee rules. She left open that possibility, saying that there are other members who would like to participate. But she said she hadn’t decided whether to appoint Illinois Rep. Adam Kinzinger, one of only two Republicans who voted in support of creating the panel last month.

The other, Wyoming Rep. Liz Cheney, has already been appointed by Pelosi to sit on the committee along with seven Democrats — ensuring they have a quorum to proceed, whether other Republicans participate or not.

Cheney praised Kinzinger, saying he would be a “tremendous addition” to the panel. Several Democrats on the panel also seemed to support the idea, with Chairman Bennie Thompson of Mississippi saying the military veteran is a “the kind of person we’d want to have.”

Banks and Jordan are outspoken allies of Trump, who has continued to spread lies alleging massive fraud in the election despite no evidence of that and has defended his supporters who broke into the Capitol. The rioters fought past police and sent lawmakers inside running for their lives. Trump’s allegations of fraud were rejected by courts, his attorney general and other prominent Republicans.

McCarthy Wants Pelosi to Accept All or Nothing

The House voted in May to create an independent investigation that would have been evenly split between the parties, but Senate Republicans blocked that approach in a vote. Pelosi said the new panel was being created only because a bipartisan commission was no longer an option.

Asked Thursday if Cheney — and potentially Kinzinger — could be stripped of their regular committee assignments as retaliation for participating, McCarthy said “the conference will look at it.” Cheney accepted the assignment from Pelosi earlier this month despite similar threats from McCarthy.

Like Jordan and Banks, Nehls voted to overturn Biden’s victory. Armstrong and Davis voted to certify the election.

Banks recently traveled with Trump to the U.S.-Mexico border and visited him at his New Jersey golf course. In a statement after McCarthy chose him for the panel, he sharply criticized the Democrats who had set it up.

Democrats whom Pelosi appointed to the committee this month were angry over that statement and concerned over Banks’ two recent visits with Trump, according to a senior Democratic aide familiar with the private deliberations who spoke on the condition of anonymity to discuss them.

Jordan, the top Republican on the House Judiciary Committee, was one of Trump’s most vocal defenders during his two impeachments and last month likened the new investigation to “impeachment three.” Trump was impeached by the House and acquitted by the Senate both times.

The panel is also considering hiring former Rep. Denver Riggleman of Virginia, a Republican who has criticized Trump’s lies about election fraud, as an outside adviser, according to a person familiar with the committee’s work who was granted anonymity to discuss the private talks.

Cheney told reporters she agrees with Pelosi’s decision to reject the two Republicans named by McCarthy.

“At every opportunity, the minority leader has attempted to prevent the American people from understanding what happened — to block this investigation,” Cheney said.

The panel will hold its first hearing next week, with at least four police officers who battled rioters testifying about their experiences. Members of the committee met Thursday afternoon to prepare.

Thompson said the hearing would allow the law enforcement officers to tell their stories and “set the tone” for the investigation’s launch.

Seven people died during and after the rioting, including a woman who was shot by police as she tried to break into the House chamber and three other Trump supporters who suffered medical emergencies. Two police officers died by suicide in the days that followed, and a third officer, Capitol Police Officer Brian Sicknick, collapsed and later died after engaging with the protesters. A medical examiner determined he died of natural causes.

Group Hints at Possible Drama Over Fresno School Board Vacancy