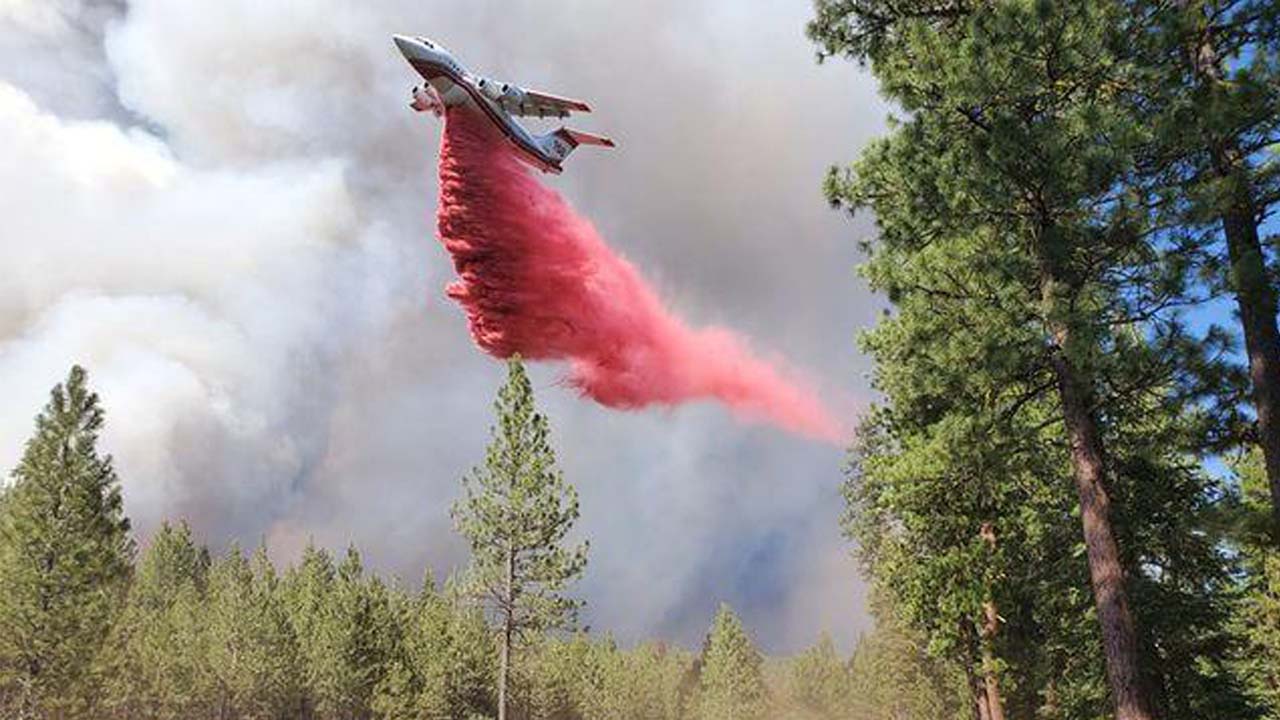 A tanker drops retardant over the Mitchell Monument area at the Bootleg Fire in southern Oregon. (Bootleg Fire Incident Command via AP)
Share with friends

PORTLAND — Ecologists in a vast region of wetlands and forest in remote Oregon have spent the past decade thinning young trees and using planned fires to try to restore the thick stands of ponderosa to a less fire-prone state.

This week, the nation’s biggest burning wildfire provided them with an unexpected, real-world experiment. As the massive inferno half the size of Rhode Island roared into the Sycan Marsh Preserve, firefighters said the flames jumped less from treetop to treetop and instead returned to the ground, where they were easier to fight, moved more slowly and did less damage to the overall forest.

The initial assessment suggests that the many years of forest treatments worked, said Pete Caligiuri, Oregon forest program director for The Nature Conservancy, which runs the research at the preserve.

“Generally speaking, what firefighters were reporting on the ground is that when the fire came into those areas that had been thinned … it had significantly less impact.”

The reports were bittersweet for researchers, who still saw nearly 20 square miles of the preserve burn, but the findings add to a growing body of research about how to make wildfires less explosive by thinning undergrowth and allowing forests to burn periodically — as they naturally would do — instead of snuffing out every flame.

The Bootleg Fire, now 606 square miles (1,569 square kilometers) in size, has ravaged southern Oregon and is the fourth-largest fire in the state’s modern history. It’s been expanding by up to 4 miles (6 kilometers) a day, pushed by gusting winds and critically dry weather that’s turned trees and undergrowth into a tinderbox.

Fire crews have had to retreat from the flames for 10 consecutive days as fireballs jump from treetop to treetop, trees explode, embers fly ahead of the fire to start new blazes and, in some cases, the inferno’s heat creates its own weather of shifting winds and dry lightning. Monstrous clouds of smoke and ash have risen up to 6 miles into the sky and are visible for more than 100 air miles.

The fire in the Fremont-Winema National Forest merged with a smaller nearby blaze Tuesday, and it has repeatedly breached a perimeter of treeless dirt and fire retardant meant to stop its advance.

More evacuations were ordered Monday night, and a red flag weather warning signifying dangerous fire conditions was in effect through Tuesday. The fire is 30% contained.

“We’re in this for as long as it takes to safely confine this monster,” Incident Commander Rob Allen said Tuesday.

At least 2,000 homes have been evacuated at some point during the fire and another 5,000 threatened. At least 70 homes and more than 100 outbuildings have gone up in flames. Thick smoke chokes the area where residents and wildlife alike have already been dealing with months of drought and extreme heat. No one has died.

Several Wildfires Burning in Many Parts of the West

The Bootleg Fire was one of many fires burning in a dozen states, most of them in the West. Sixteen large uncontained fires burned in Oregon and Washington state alone on Monday.

On Tuesday, officials temporarily closed all recreational and public access to state-managed lands in eastern Washington due to fire danger, starting Friday.

Historically, wildfires in Oregon and elsewhere in the West burned an area as big or bigger than the current blaze more frequently but much less explosively. Periodic, naturally occurring fire cleared out the undergrowth and smaller trees that cause today’s fires to burn so dangerously.

Those fires have not been allowed to burn for the past 120 years, said James Johnston, a researcher with Oregon State University’s College of Forestry who studies historical wildfires.

The area on the northeastern flank of the Bootleg Fire is in the ancestral homeland of the Klamath Tribes, which have used intentional, managed fire to keep the fuel load low and prevent such explosive blazes. Scientists at the Sycan Marsh research station now work with the tribe and draw on that knowledge.

Climate change is the catalyst for the worsening wildfire seasons in the West, Johnston said, but poor forest management and a policy of decades of fire suppression have made a bad situation even worse.

“My colleagues and I have been predicting a massive fire in that area for years. It’s an area that’s exceptionally prone to catastrophic fire,” said Johnston, who is not affiliated with Sycan Marsh. “It’s dry. It’s fire-prone and always has been. But what’s changed over the past 100 years is an extraordinary amount of fuel buildup.”

Elsewhere, fire crews were engaged in other daunting battles.

Evacuations Expand as Firefighters and Researchers Race to Protect Communities

In Northern California, authorities expanded evacuations for the Tamarack Fire in Alpine County in the Sierra Nevada to include the mountain town of Mesa Vista late Monday. That fire, which exploded over the weekend was 61 square miles (158 square kilometers) with no containment.

Tony Galvez fled with his daughter at the last minute and found out the family’s home is gone.

“I lost my whole life, everything I’ve ever had. The kids are what’s going to matter,” he said as he fielded calls from relatives. “I got three teenagers. They’re going to go home to a moonscape.”

On the western side of the Sierra, the Dixie Fire has scorched more than 90 square miles (163 square kilometers), threatening tiny communities in the Feather River Valley region.

Meteorologist Julia Ruthford told a briefing that a surge of monsoonal moisture from the Southwest had created plumes topping 6 miles — so big that the fire generated a thunderstorm over itself with lightning and gusty winds.

For the past two days in Oregon, the fire has danced around Sycan Marsh, where researchers raced to protect buildings with sprinklers and fire lines. The 47-square-mile habitat attracts migrating and nesting birds and offers a unique location to research forest and fire ecology.

The nonprofit operates its own fire engines and now has three engines and seven firefighters on the blaze and more people are arriving.

“It’s an amazing place,” Caligiuri said. “It’s very hard to watch it all happening, and seeing all of that work being threatened by this fire is a lot to process.”

Jeff Bezos Blasts Into Space on Own Rocket: ‘Best Day Ever!’