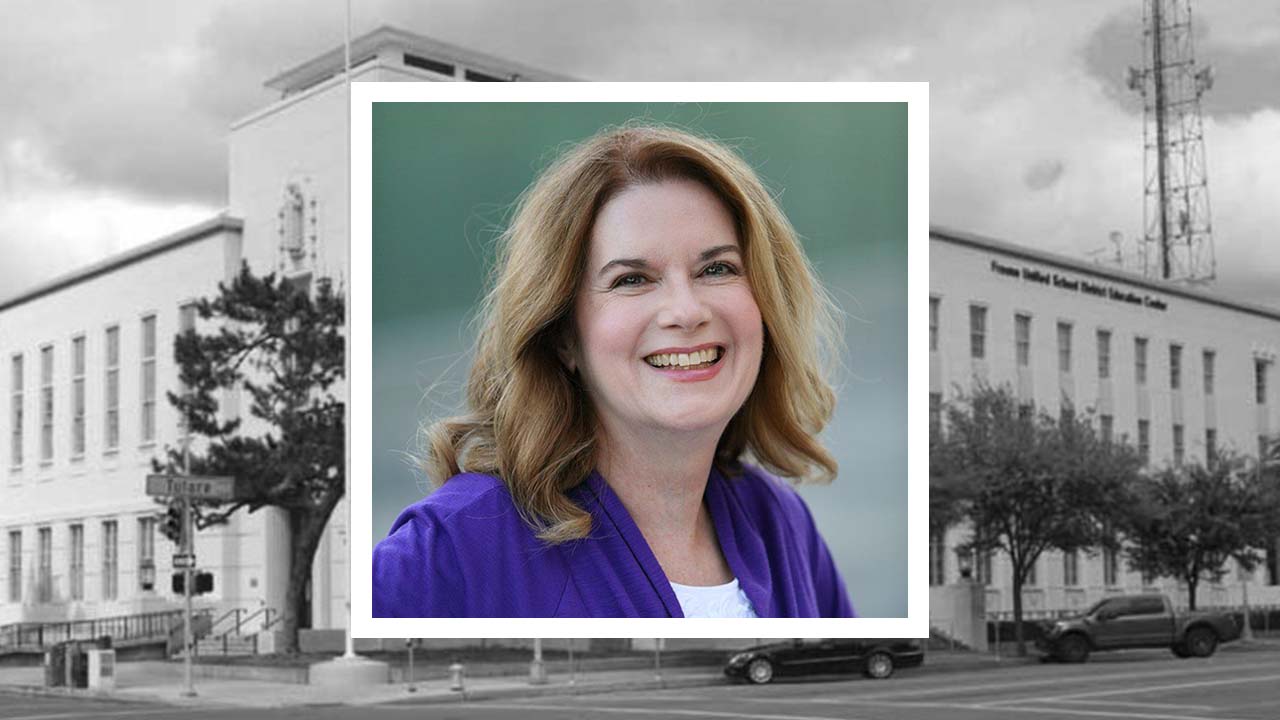 Carol Mills, who represented the Fresno High area on the Fresno Unified School Board for nearly two decades, died early Wednesday after battling ALS for months. She was 66.

Ms. Mills served her final months as a trustee in a wheelchair, communicating through a computer-generated voice. ALS, a nervous system disease that weakens muscles and impacts physical function, is also known as Lou Gehrig’s disease.

Her death comes eight months after she was re-elected to her fifth term on the School Board. At the time of her death, she was one of the district’s two longest-serving trustees.

Ms. Mills’ son Sam released the following statement through the district: “We’re heartbroken at the loss of Carol. She spent her life in service to others and will be deeply missed. We ask for the respect of our privacy as we mourn our loss.”

And she was relentless, he said, whether it was about the lack of air-conditioning in classrooms and school buses, or the expansion of the International Baccalaureate program —”without her, IB is not a thing” — and career-technical education programs.

A career-technical building is now under construction at Fresno High on the site of an older building that lacked air conditioning, among other attributes, and Ms. Mills was instrumental in pushing for that new building as well as preserving the campus’s historic buildings, Nelson said.

She advocated for students, many of whom had never left the Valley, to have out-of-town trips such as to Yosemite to widen their world view, he said.

And Ms. Mills “advocated tirelessly for having after-school opportunities available to every child and family — a dream that will be realized in 2021,” he said.

For Ms. Mills, the district was part of her family, Nelson said. He recalled seeing family photos, her son’s Pinewood Derby trophies, but also photos of her with district friends when visiting her at home.

Michelle Asadoorian, who served two terms on the School Board alongside Mills, said she was the smartest and also hardest-working trustee whose legal abilities equipped her to read the fine print and find things that other trustees had missed.

And her hard work prompted great loyalty in the Fresno High region, which re-elected her repeatedly. While that type of loyalty might be common for a district like Clovis Unified, it’s exceeding rare in a highly politicized, large urban district such as Fresno, Asadoorian said.

A campaign website for Ms. Mills, who Asadoorian called a “private” public person, provided details about her family and upbringing. Ms. Mills, a native of California, said her father was abandoned as a child and raised in an orphanage, and her parents were hard-working blue collar laborers who didn’t have the opportunity to go to college.

She was the first in her family to graduate from college, earning her bachelor’s degree majoring in political science in 1976 from the University of California at Riverside. Although she struggled with a speech impediment, Mills opted for a law career and earned her degree three years later from the University of the Pacific, McGeorge School of Law in Sacramento.

After working a dozen years in private practice, she worked for the U.S. Department of Justice specializing in bankruptcy and “white collar” cases and was a lead appellate court attorney for the Fifth District Court of Appeal from 1996 until her retirement.

Brian Cotta, clerk/executive officer administration, provided a statement from the court: “Carol was a dedicated research attorney for our court for 24 years before retiring last year. She will be missed. Our hearts go out to her family.”

Serving on the Board

In her first race in 2004, Ms. Mills topped beleaguered incumbent Dave Wright and three other challengers and won the election with 32% of the votes cast.

Board chairwoman Valerie Davis also was elected to the board for the first time that year, and she recalls that she and Ms. Mills were not on the “mayor’s slate” of candidates. But as Fresno Unified parents — Davis said she first met Ms. Mills as parent volunteers on a district bond committee years before — they were determined to make a difference.

They grew in friendship over the years, Davis said. Ms. Mills had season tickets to the opera in Fresno and would invite Davis to join her — so long as she promised not to wear perfume (Ms. Mills had a violent allergy to it). They shared in family milestones such as Davis’ daughters’ weddings and holiday gatherings.

On the dais, Davis said, she knew she could count on Ms. Mills’ support during the numerous times she served as board chairwoman. Their only disagreement was over Measure X, a bond measure that split the board but that voters approved.

In her second election in 2008 Ms. Mills faced only one challenger, but the race was a close one and was decided by a mere 166 votes out of more than 85,000 votes cast.

In the 2012 election she was challenged by two opponents but easily won reelection to the Area 5 seat with 61% of the vote. That was the first election in which School Board candidates were elected only by voters in their trustee areas.

Even though she no longer needed districtwide support, Mills continued to show up at school and community events across the region, getting to know students and parents in many neighborhoods and not just Fresno High, Asadoorian said.

In 2016 Ms. Mills won re-election without opposition. But she had to campaign hard again in 2020 when she faced a field of three challengers, retaking her seat on the board with a 1,000-vote margin over the second-place finisher, community organizer David Paredes.

Matt Rogers worked with Ms. Mills on all her campaigns and then was invited to administer her oath of office after the 2020 election, which was held virtually because of the pandemic.

Rogers said Ms. Mills was “just a friend like no other. She was loyal and told you the truth, no matter if you wanted to hear it or not.”

He said he was unaware of whether Ms. Mills knew when she was vying for what would be her final term in office that she had ALS. She had suffered a fall the previous summer but was getting around ably, he said.

She showed no signs in her campaign appearances in 2020, including candidate forums held online. The School Board was then meeting virtually because of the coronavirus pandemic, and Ms. Mills continued to participate and appeared on camera.

But in subsequent months the impacts of ALS were becoming more apparent. Her speech became more impaired, and her camera remained off during the meetings.

At the unveiling in May of the new Fresno High mascot image, Ms. Mills rolled up in her wheelchair to join other officials at the front of the ceremony, delivering her brief comments with a computer-generated enunciator.

When a resident publicly questioned her ability to continue serving the district, she noted that people with disabilities can still ably serve, pointing to President Franklin Delano Roosevelt and physicist Stephen Hawking.

News of her passing was greeted with sadness in the community.

Assemblymember Joaquin Arambula, D-Fresno, called Ms. Mills “a true public servant” who was committed to improving the quality of education and programs for students across the district, the state’s third-largest. “Elizabeth and I are saddened to hear of her passing and extend our condolences to her family, friends and colleagues,” he said in a statement.

My statement on the passing of Carol Mills — a well-respected community leader and @fresnounified trustee for the last 17 years. pic.twitter.com/gBKZZuvn1o

Nelson said that her recorded graduation speech for the 2020 Commencement for Fresno High “was the very epitome of the concept of ‘finishing well.’

“Our community has been made better through her commitment to serving others. We stand in her debt, and she will be missed.”