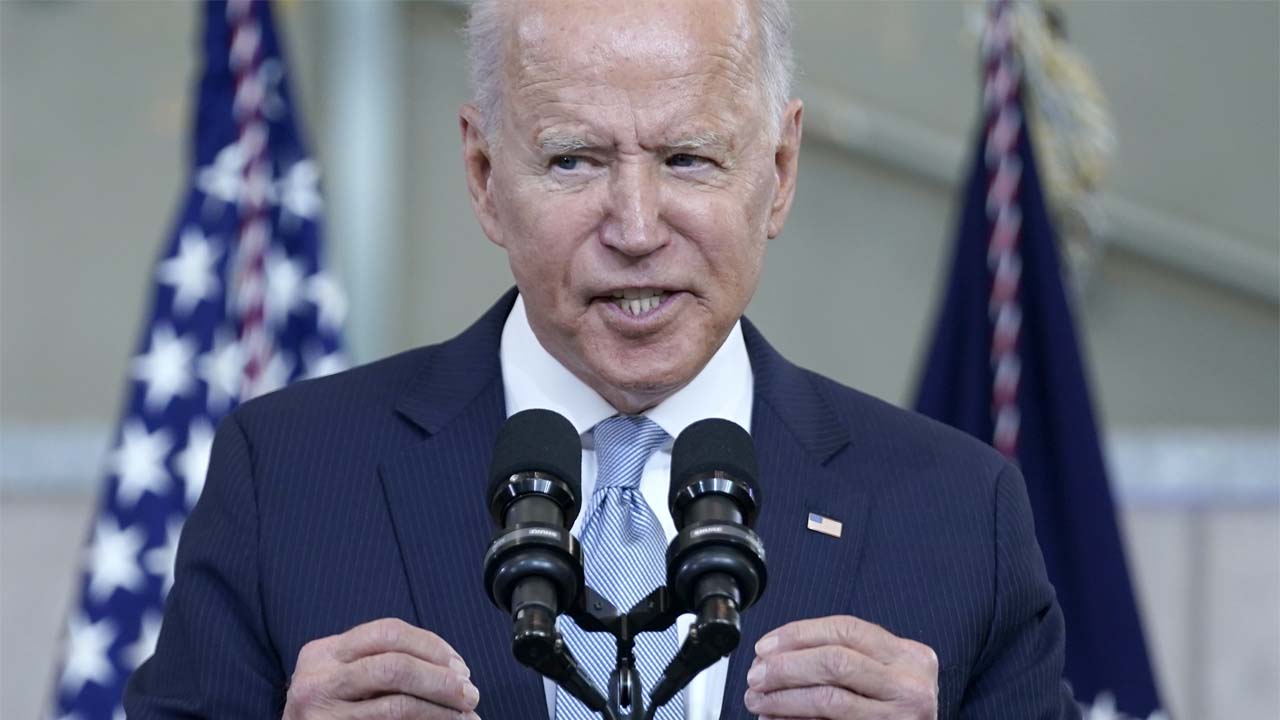 In this July 13, 2021, photo, President Joe Biden delivers a speech on voting rights at the National Constitution Center in Philadelphia. (AP Photo/Evan Vucci)
Share with friends

WASHINGTON — Senate Democrats say they have reached a budget agreement that envisions spending an enormous $3.5 trillion over the coming decade, paving the way for their drive to pour federal resources into climate change, health care and family service programs sought by President Joe Biden.

The accord announced Tuesday night marks a major step in the party’s push to meet Biden’s goal of bolstering an economy that was ravaged by the coronavirus pandemicand setting it on course for long-term growth. It includes a Medicare expansion of vision, hearing and dental benefits for older Americans, a goal of progressives.

But Democrats behind the agreement face possible objections from rival moderate and progressive factions and will have to work hard to convert their plans into legislation they can push through the closely divided Congress over what could be unanimous Republican opposition.

“We are very proud of this plan,” Senate Majority Leader Chuck Schumer, D-N.Y., told reporters. “We know we have a long road to go. We’re going to get this done for the sake of making average Americans’ lives a whole lot better.”

Biden will attend a closed-door lunch at the Capitol on Wednesday with Senate Democrats to focus on “getting this wonderful plan” enacted, Schumer said.

All told, the ambitious proposal reflects Biden’s vision for making the most substantive potential investments in the nation in years, some say on par with the New Deal of the 1930s. Together with a slimmer, $1 trillion bipartisan effort of traditional road, highway and public works also being negotiated, they represent close to the president’s initial $4 trillion-plus effort that could reach almost every corner of the country.

The Democrats’ goal is to push a budget resolution reflecting Tuesday’s agreement through the House and the Senate before lawmakers leave for their August recess. The resolution sets only broad spending and revenue parameters, leaving the actual funding and specific decisions about which programs are affected — and by how much — for later legislation.

Nonetheless, approving a budget will be a major boon for the Democrats’ effort to enact their subsequent funding bill. That’s because the budget contains language that would let Democrats move the follow-up spending measure through the 50-50 Senate with just a simple majority, not the 60 votes Republicans could demand by using a bill-killing filibuster.

The actual spending legislation will likely not start moving through Congress until the fall.

Infrastructure Proposal Also in the Works

Separately, a bipartisan group of senators is working to flesh out a measure that would spend around $1 trillion on roads, water systems and other infrastructure projects, another Biden priority. Biden and that group had agreed to an outline of that measure last month.

On Wednesday, Biden will push for public support of that infrastructure proposal by hosting a bipartisan group of governors and mayors at the White House. He plans to emphasize the bipartisan aspects of the proposal, as senators work to finalize details for a Thursday deadline.

He’ll highlight some of the areas where Democrats and Republicans agreed, including investments in removing lead pipes, expanding access to high-speed internet, transit and rebuilding roads and bridges. Biden will also speak about the impact his policies would have on local communities, according to an administration official who shared details with the AP on condition of anonymity.

In discussing the budget agreement, Schumer and other lawmakers did not respond when asked if they had the support of all 50 Democratic senators, which they will need to succeed. They also have virtually no margin for error in the House, where they can lose no more than three Democratic votes and still prevail.

Moderates like Sens. Joe Manchin, D-W.Va., and Kyrsten Sinema, D-Ariz., might still demand further changes to reduce the plan’s price tag and impact on already huge federal deficits. Progressives in both chambers might insist on beefing it up or other changes.

The Democrats’ announcement Tuesday left many questions about their budget accord unanswered. These included how much it would raise through tax increases on the wealthy and corporations and other revenue to pay for its costs; how much would be spent on specific programs; and how Biden’s proposals would be curtailed or eliminated to fit into the legislation.

Schumer said the proposal would call for financing Biden’s budget priorities “in a robust way.” He also said it would include a priority of Sanders and other progressives: an expansion of Medicare, the federal health insurance program for older people, to cover dental, vision and hearing services.

Sanders said the agreement would end an era in which rich people and big companies weren’t bearing enough of the burden of financing government programs.

“Those days are gone,” he said. “The wealthy and large corporations are going to start paying their fair share of taxes, so that we can protect the working families of this country.”

Higher Taxes for the Wealthy

Sen. Mark Warner, D-Va., a leading moderate who helped shape the budget package, said the measure would be fully paid for with offsetting revenue, but he provided no details. Biden has proposed financing the measure with higher taxes on the wealthy and corporations and beefing up the IRS’ budget so it can collect more revenue from scofflaws.

The budget will include language calling for no tax increases on people making less than $400,000 a year, a Biden demand, or on small businesses. The provision was described by a Democratic aide who insisted on anonymity to discuss the negotiations.

On infrastructure, lawmakers are aiming to wrap up the details by Thursday despite opposition from business leaders, outside activists and some GOP senators over how to pay for the $1 trillion plan, which includes about $579 billion in new spending beyond regular expenditures already funded by gas taxes and other sources.

Senators exiting a meeting Tuesday suggested they hadn’t so much resolved the questions over how to pay for the package but moved past them — apparently accepting that some of the proposed revenue streams may not pass muster in formal assessments by the Congressional Budget Office, the lawmakers’ nonpartisan fiscal scorekeeper.

Manchin said he hoped that the CBO’s score, as it is called, would show that “everything’s paid for.”

“If not,” he said, “we’ll have to make some adjustments.”

Fresno Wants to Watch You as You Park at the Park