Pope Voices 'Affection' for Americans as He Meets Blinken 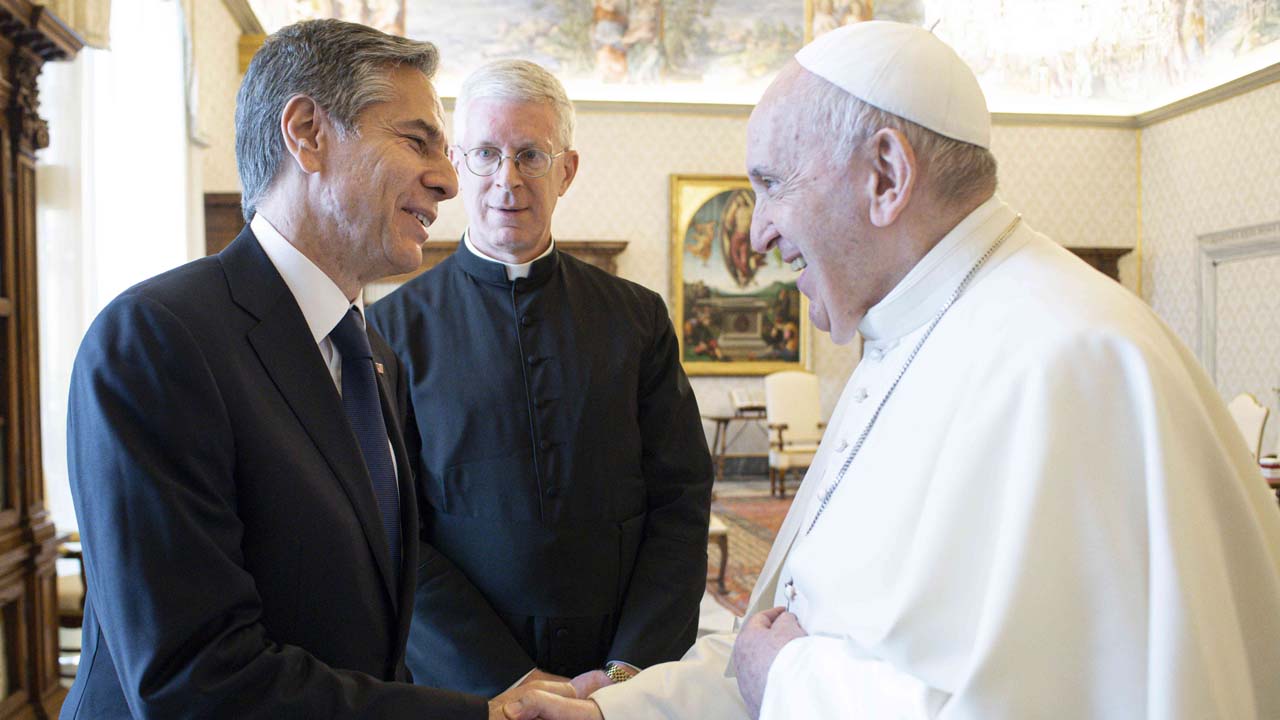 VATICAN CITY — Pope Francis expressed his “affection” for the American people as he met at length Monday with U.S. Secretary of State Antony Blinken.

Blinken declined to delve into “domestic politics” when later asked if the two discussed a campaign by U.S. bishops to deny Holy Communion to Roman Catholic politicians like the U.S. president who support abortion rights.

The Vatican said the two spoke for about 40 minutes, a long time considering that Blinken isn’t the top U.S. administration leader.

Pope Expressed His Affection and Attention for Americans

The closed-door meeting in the Apostolic Palace “played out in a cordial atmosphere,” a Vatican spokesman, Matteo Bruni, said. The meeting, “was, for the pope the occasion to recall his 2015 visit and to express his affection and his attention to the people of the United States of America.”

Bruni was referring to the pontiff’s U.S. pilgrimage, which included a meeting at the White House with then President Barack Obama. In recent years, the U.S. church hierarchy has been increasingly more polarized about U.S. politics and politicians.

Many of the more conservative U.S. bishops have been clamoring for a clear directive from their ranks against giving Communion to U.S. political figures who are Roman Catholics and support women’s right to abortion. Vatican teaching forbids abortion as a grave sin. This campaign puts the heat on President Joe Biden, a Catholic who has said that while he personally opposes abortion, he supports abortion rights.

Earlier this month, the U.S. churchmen decided to go ahead and craft a document about Communion. Only a month earlier, Francis’ top official on doctrinal orthodoxy had urged the bishops to think the matter through thoroughly and aim to keep divisions to the minimum.

Blinken declined to wade into the issue when he was asked at a news conference in Rome after his Vatican visit if he and Francis had discussed the divisive issue.

“One of the luxuries of my job is that I don’t do domestic politics,” said Blinken, who described his talks with the pope as ”extremely warm and very wide-ranging.”

Francis himself hasn’t weighed in publicly on the latest squabble in the long-running wrangling over the Communion issue within the U.S. Conference of Bishops.

Blinken had high praise for Francis and the opportunity to be the highest level official in the fledgling Biden administration to have a sit-down session with the pontiff.

“I was very gratified by the meeting and gratified as well by the strong leadership of His Holiness on the pandemic, on climate change” as well as on “the challenge that we have to address on irregular migration and refugees,” Blinken said.

The U.S. official said that speaking more broadly, ”maybe most important of all, his leadership on the basic proposition that we have to stand for human dignity in everything we do to the best of our ability.”

Blinken’s spokesman, Ned Price, said the secretary had assured the pontiff about the United States’ commitment to working closely with the Holy See to address global challenges and the needs of the world’s least fortunate and most vulnerable, including refugees and migrants.”

That would generally synch with Francis’ overarching agenda of putting those living on life’s margin at the center of attention.

Blinken also thanked Francis for “longstanding leadership” on the need to tackle climate change. Early in his papacy, Francis issued an encyclical, or formal teaching document, stressing the need to treasure and protect the environment.

China Among the Issues Discussed by Pope and Blinken

Last year, when Blinken’s predecessor, Mike Pompeo, came to the Vatican, he wasn’t granted any private time with Francis. At the time, Vatican officials explained that the Holy See didn’t want to give any impression of favoritism only weeks before the U.S. presidential election.

Pompeo had blasted the Vatican for what he said was a lessening of its moral authority by signing an accord with Beijing over the nominations of Chinese bishops. Pompeo had insisted that the Holy See take a tougher stand against Chinese restrictions on religious freedom.

Biden, for his part, has criticized China for forced labor practices. Blinken’s spokesperson said China was among the subjects discussed by Francis and the U.S. secretary.

Human rights and religious freedom in China were also discussed in Blinken’s separate talks with the Holy See’s No. 2, Cardinal Pietro Parolin, the Vatican’s secretary of state, and with Archbishop Paul Gallagher, its foreign minister.

Blinken stressed U.S. support for a return to democracy in Venezuela and “our desire to help the Venezuelan people rebuild their country,” Price said.

Blinken was also given a guided, private tour of the Sistine Chapel, with its ceiling frescoed by Michelangelo and other Renaissance masterpieces.

He had meetings with Italian officials before his scheduled evening flight to southern Italy for Tuesday’s Group of 20 meeting of foreign ministers, which is focused on improving collaboration among nations on climate change, health issues and development.