Fresno Mayor Jerry Dyer says he wants to avoid divisiveness when flying flags at City Hall. He is proposing that instead of an LGBTQ Pride flag-raising ceremony on June 11 at City Hall, it would take place two blocks away at another city property — Eaton Plaza.

Dyer pitched his proposal that all future flag ceremonies take place at what he would call “Unity Park,” in the heart of downtown Fresno.

“That is my alternative solution to what I think to be something that, instead of being divisive, can be unifying,” Dyer said. 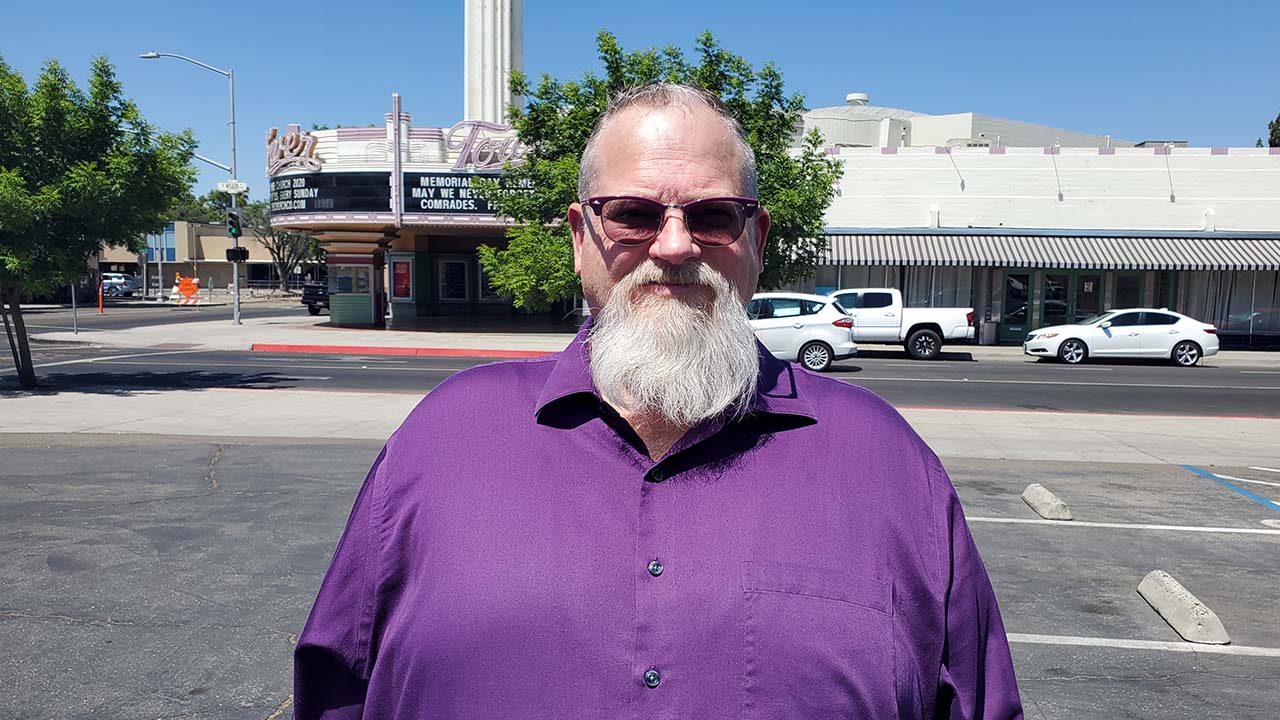 “There’s a great deal of symbolism of having your government recognize you and endorse who you are, support you and include you in a true One Fresno vision. So having that flag in front of City Hall is where it needs to be, and that is where it should fly.” — Jeffrey Robinson, Rainbow Pride

But, the organization behind next week’s ceremony wants it to remain at City Hall.

“We’re not understanding why there’s an issue. Other flags (are) flown at Fresno City Hall and the Gay Pride flag should fly there as well,” said Jeffrey Robinson, CEO of Community Link/Rainbow Pride.

“Mayor Dyer’s haphazard proposal violates both the City Parks Master Plan and Eaton Plaza Master Plan. The only objective this plan addresses is his interest in obstructing the flying of the Pride flag at City Hall,” Arias said in a statement.

“City Hall, not Eaton Plaza, is where Fresnans for decades have gathered to show unity as a community. ‘One Fresno’ starts by leaving behind separate-but-equal solutions and embracing unity in our most powerful institutions.”

Dyer says he supports the LGBTQ community as part of his “One Fresno” slogan. He plans to sign a proclamation declaring June as Pride month.

“I want the LGBT community to know that I stand with you,” Dyer said.

Mock-up illustrations show seven flags around the stage area at Eaton Plaza. Dyer committed to flying the Pride flags there all month.

“There’s a great deal of symbolism of having your government recognize you and endorse who you are, support you and include you in a true One Fresno vision. So having that flag in front of City Hall is where it needs to be, and that is where it should fly,” Robinson said.

Dyer said other communities like Merced, hold Pride events at a local park.

“I do not want any group or organization in this community (to) feel like they are being displaced — that we have relegated Eaton Plaza as a place that is less than the importance of City Hall. That is not the case,” Dyer said. 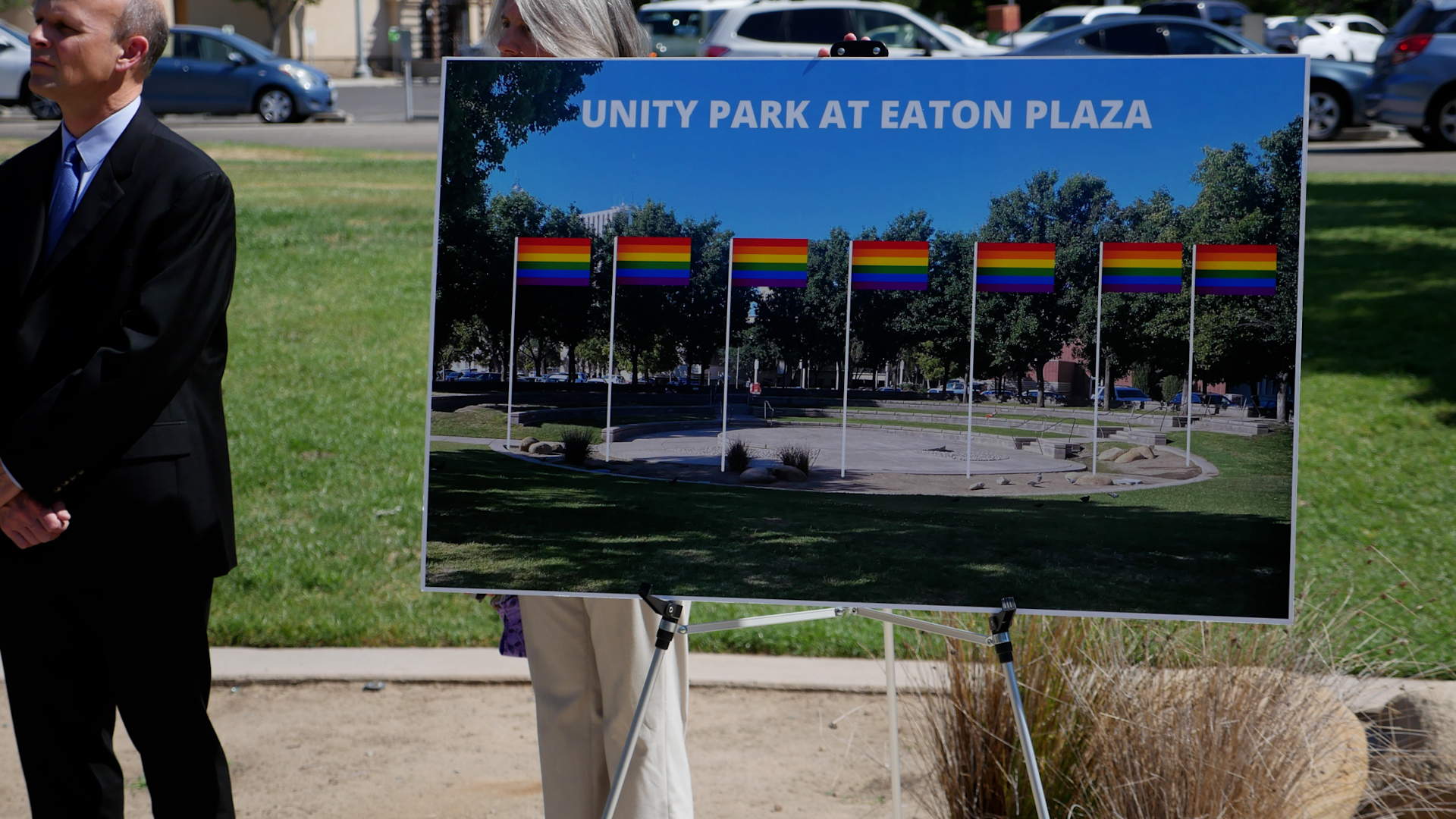 A city mock-up of what the flags at Eaton Plaza would look like. (GV Wire/Jahz Tello)

Would Dyer Exercise a Veto?

City code allows for the U.S., state, city, and POW/MIA flags to be flown on the three poles in front of City Hall. In the past, flags representing Greece and Armenia have flown there as well. The decision rests with the city manager.

Last week, the Fresno City Council passed a resolution, 5-2, that took control of the City Hall flagpole from the city manager and vested it in the council. Flags representing a political viewpoint or candidate, commercial business, or “illegal discriminations” are not allowed.

Dyer would not reveal whether he would exercise a veto.

Interpretations of the U.S. Constitution would prevent the city from flying religious flags. Dyer said that by erecting flagpoles for the public — and let them apply to fly flags — it would get around any constitutional issue.

Dyer’s staff says he has until June 11 to issue a veto, the same day as the scheduled ceremony, and one day after the city council’s next scheduled meeting.

Councilman Mike Karbassi, who voted in favor of the flag code, said he would want to see what is in the veto message before voting on it. He appeared alongside Dyer and Councilman Garry Bredefeld supporting a move to Eaton Plaza.

Councilman Tyler Maxwell said he would override a potential veto. He supports Eaton Plaza as a free speech area, but the Pride flag ceremony should remain at City Hall.
“I think that’s a really good idea and a great way to bring a lot of folks from differing ideas in our community together in one spot,” Maxwell said of Eaton Plaza. “However, I do want to be clear. I am still in support of the LGBTQ-plus flag being flown in front of City Hall next week.”

Robinson is ready if a veto is issued.

“We will definitely have a reaction to that. We will gather our community together and we will call upon the city council to override his veto,” Robinson said. 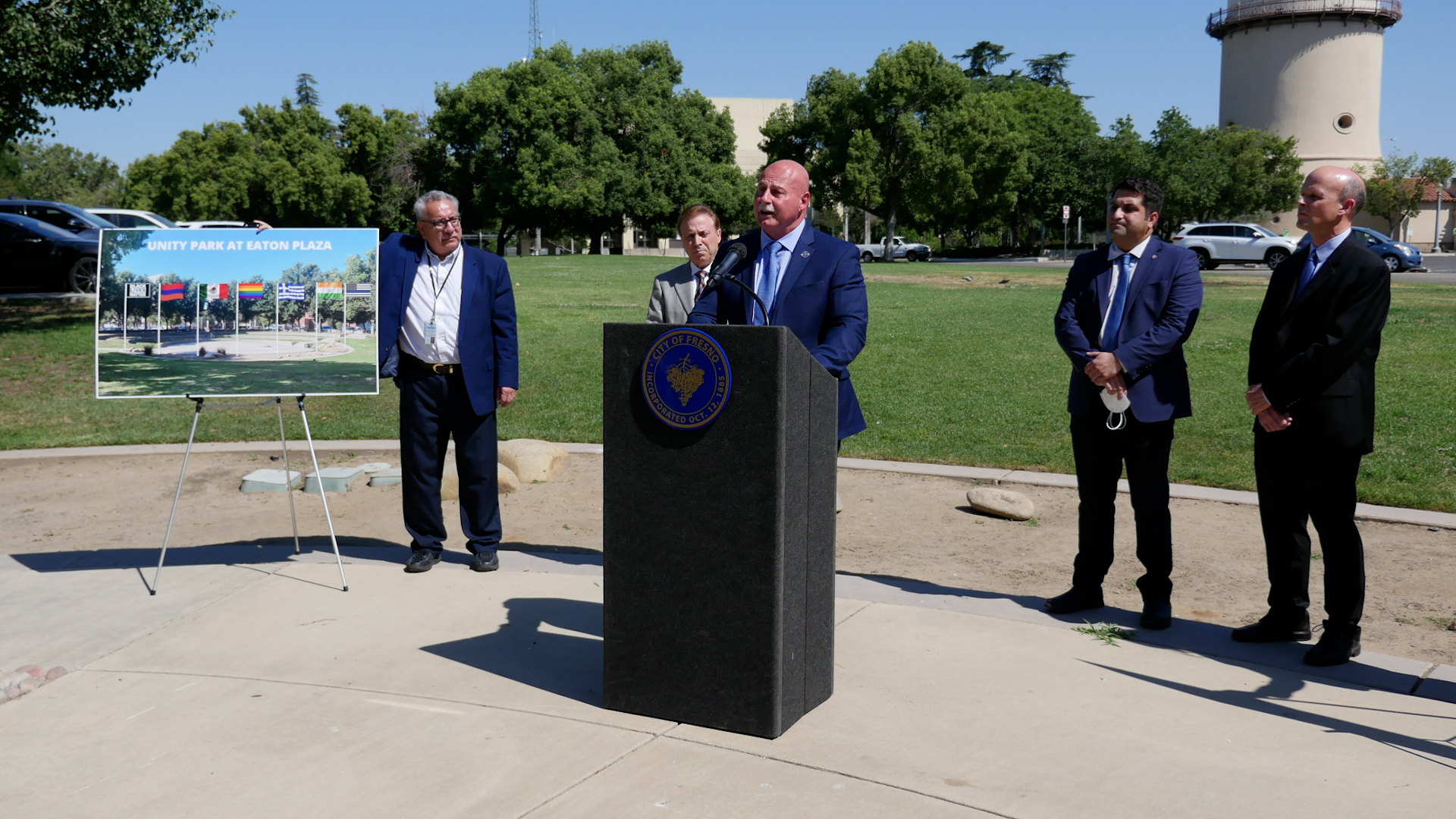 How Unity Plaza Would Work

Any group could request their flags be flown at Eaton Plaza, Dyer said.

“We’re going to be in a position to say yes to all of them,” Dyer said.

While exact details remain to be worked out, it would likely operate on a first-come, first-serve basis. Dyer said his office can erect the flagpoles — illustrations show seven — without council support and by June 11.

Dyer recognized that any group could mean groups with very unpopular views. His administration is consulting with attorneys — both in-house and out — whether “deep hate” messages could be barred.

“Case laws have always been interpreted to say it has to be some type of a deep, deep offense. And what we don’t want is anything that’s going to… spew hatred or prejudice or anything of that nature,” Dyer said.

If groups with opposite messages wanted to fly at the same time, Dyer said he would try to work something out. 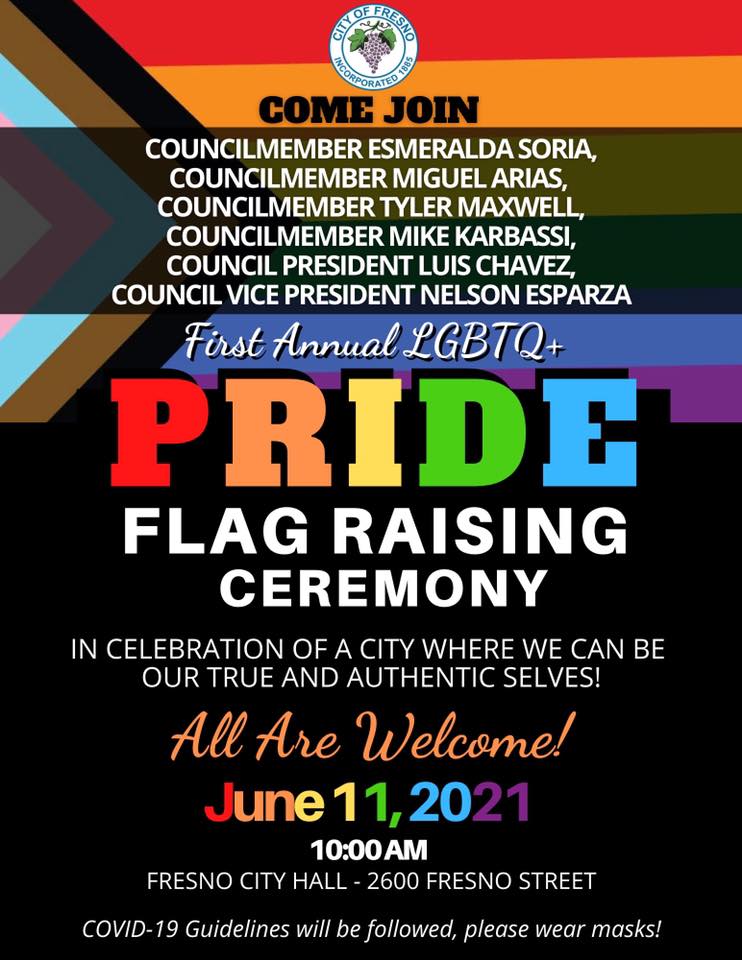 A flyer on social media for the Pride flag ceremony at City Hall on June 11. (Facebook/Miguel Arias)