Will Redistricting Put Different Names on the Ballot for Fresno Voters? 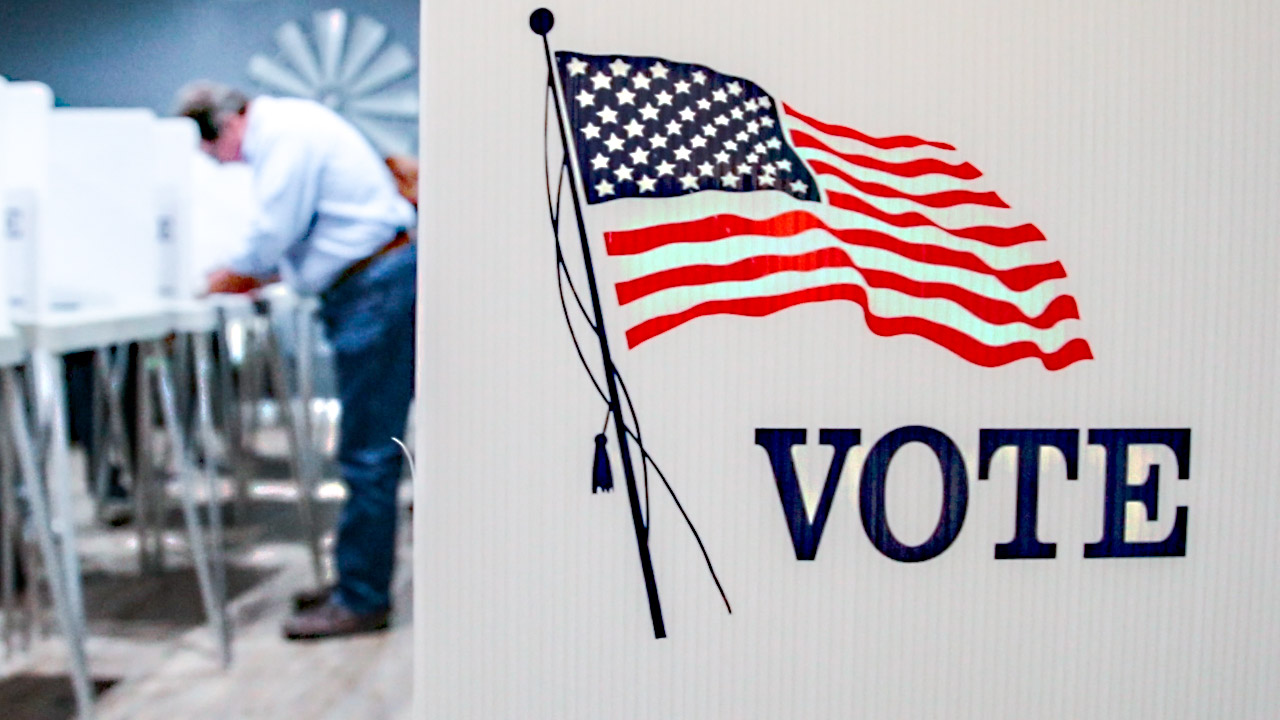 It will be a rush to redraw the seven council districts in the city of Fresno. Thousands of city residents may be represented by a new council member without ever having to move.

Every 10 years, the city council — like most governmental jurisdictions — changes its political boundaries based on Census information.

For congressional seats and state Assembly, Senate, and Board of Equalization seats, an independent state commission draws the lines.

In the city of Fresno, a three-member council committee of Nelson Esparza, Miguel Arias, and Tyler Maxwell will have to crunch the numbers, hear public input, and finalize the lines by a Dec. 15, 2021, deadline.

Under normal circumstances, pertinent data would be in place already, community meetings would be scheduled, and proposed lines would be drawn.

In the COVID era, nothing is normal. Detailed census figures may not be available until August at the earliest. Normally, such information is available in March.

That has pushed back deadlines, which will likely create a rush this fall. 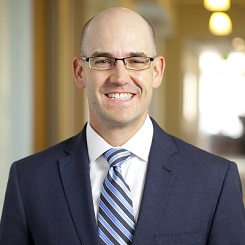 “The accuracy of it is hard to predict.” — demographer Chris Skinnell

The goal is divide Fresno’s residents relatively evenly into seven districts. According to the state Department of Finance, Fresno had 543,451 residents as of Jan. 1, 2020. The population increased 0.6% in Jan. 2021, adding 3,300 residents.

Redistricting will be based on Census figures, measuring the population from April 2020.

Chris Skinnell, the city’s consultant with the firm Nielsen Merksamer, based his population estimates on the 2015-2019 American Community Survey.

“The accuracy of it is hard to predict,” Skinnell said.

Skinnell estimated the city’s population as 522,165.

Based on law, each council district can only differ 10% from the city’s population split seven ways.

District 7 in central Fresno is 8.44% below the mark; District 3 in southwest Fresno and downtown is 5.30% down.

District 2 in northwest Fresno is 4.09% above the average mark, the largest in any district. That makes it most likely to lose about 3,000 residents to another district. Districts 1, 4 and 6 share a border with District 2.

While each individual district is within the 10% range, the city as a whole is 12.53% off. That would trigger neighborhoods moving into new districts based on Skinnell’s estimates.

While Skinnell is skittish on the actual population numbers, he does believe the deviation from the average per-district population is accurate.

“There is going to be some changes made,” Skinnell said of neighborhoods moving into new districts.

Click here for an interactive map of the current city council borders.

During the 2011 redistricting, 12 neighborhoods switched districts. 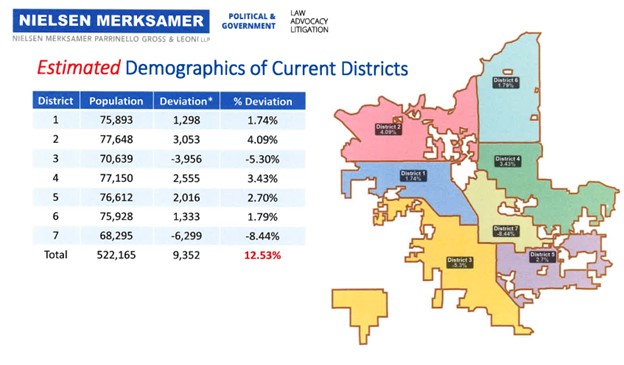 The Effect on Future Council Races

If Skinnell’s estimates hold, the borders of District 3 and 7 will need to expand — possibly shrinking neighboring districts.

District 7, represented by Nelson Esparza, borders districts 1, 3, 4 and 5. Esparza, Arias and Luis Chavez (District 5) are up for reelection in 2022.

All five districts are represented by left-leaning council members. While political party affiliation is not a criteria to change boundaries, shifting neighborhoods from one district to another could change a district’s political leanings.

Esmeralda Soria will be termed out of her District 1 seat in 2022. Three have filed paperwork to run thus far — Cary Catalano, Annalisa Perea and Jeremy Preis. All three live relatively close to the current district borders.

City ordinance prevents a sitting councilmember from being drawn out of his or her district. However, that does not apply to potential candidates.

There is precedent for candidate being moved out of the district they wanted to run it. In 1988, Gladys Olsen planned to run for the District 2 race the following year (until 1994, Fresno held elections in odd-numbered years).

But, new lines drawn put Olsen in District 1. After much protest, the city council approved the new lines anyway. Olsen moved into a different residence in District 2, but lost her election bid to unseat Tom MacMichael in 1989.

Because of COVID, timelines to hold mandated public meetings will be condensed.

At least four “town hall” style meetings are required, with a minimum of one at night or on the weekend.  Those should start by July, Skinnell said. By September, the city council should start its public hearings during its meetings.

A final vote on maps is likely to take place Dec. 9. If the city does not finalize maps by Dec. 15, it could be left up to courts to decide.

Skinnell said the outreach plan should also include postcards sent to all residents, inserts in utility bills, and advertising across all platforms.

Proposed maps of what the new districts would look like should take place in November.

A final vote on maps is likely to take place Dec. 9. If the city does not finalize maps by Dec. 15, it could be left up to courts to decide.

What About the Tower District and River Park?

The city council will deal with several criteria to redraw districts, based on federal, state and local guidelines.

Two of the stated guidelines in the city charter favor keeping like-communities together, and keeping census tracts — geographical blocks designated by the U.S. Census — intact.

The Fresno Municipal Code defines “communities of interest” together as “Any identifiable geographic concentration of persons sharing common social, political, and economic interests shall be, insofar as reasonably possible, located within the same Council district.”

But guidelines also call for separating districts at streets, freeways and railroads.

The Tower District, Fresno’s preeminent arts and cultural area, defies and conforms to the city goals at the same time. Olive Avenue is the dividing line of districts 1 and 3. The separation happened during the city’s first redistricting in 1981.

Based on the 2010 census tract map, the Tower Theatre — the heart of the district — falls into tract number 0022.00 which expands from McKinley Avenue to the north, Belmont Avenue to the south, Palm Avenue to the west, and approximately College Avenue to the east.

Whether the two sides of the Tower District will rejoin is a question to be answered later, said District 3 councilman Miguel Arias.

“It is hard to know until we see the data,” Arias said.

The border between districts 2 and 6 also defy and conform to city standards. The dividing line is at Blackstone Avenue, north of Bullard — meeting the guideline of splitting at a logical roadway.

But, it divides the north Fresno shopping area, colloquially called “River Park” and does not divide according to the census tract map, thus straying from city guidelines. 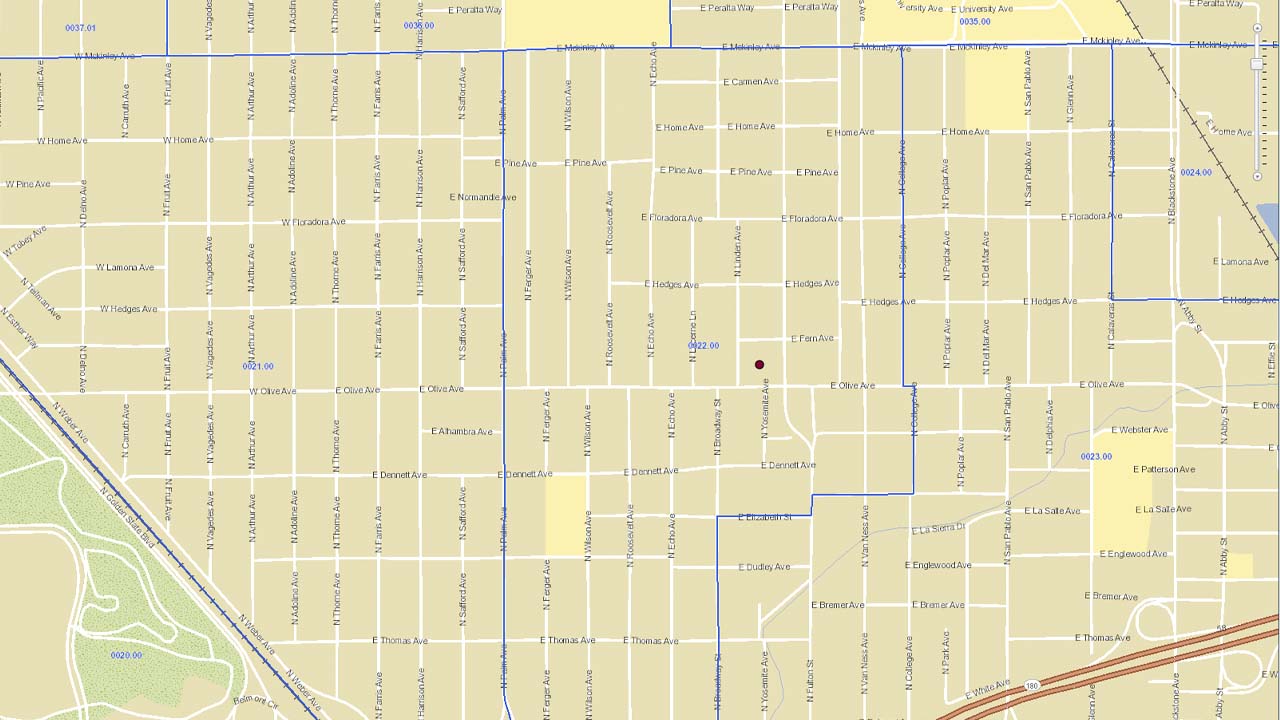 The U.S. Census tract map for the Tower District. The red dot is where the Tower Theatre is located. (Image: FFIEC)

How Other Jurisdictions are Handling Redistricting

Several other governmental jurisdictions will have to face redistricting questions.

Last week, the Fresno County Board of Supervisors appointed an 11-member advisory committee. Their timeline mirrors what the city is proposing —data by the fall, then a condensed deadline to draw and approve maps.

An exact timeline of when to hold public meetings is still to be decided. The supervisors debated on whether to hold them in person, via teleconferencing or both.

Several school districts told GV Wire they are waiting for the Census data to come out before taking the next step.

“No discussions have taken place yet, but once the data is received, the district will begin a process this fall to analyze the new data and determine whether changes must be made to the current trustee area maps to ensure appropriate population balance,” a Central Unified spokeswoman wrote via email.

In Clovis, the city does not have council districts. The entire voting population of Clovis elects councilmembers at-large. That could change, depending on data city spokesman, Chad McCollum said.

“Later this year, the city will begin evaluation — through the use of a demographic firm — of the 2020 census as well as elections data. That should conclude by next summer, ahead of the November Election,” McCollum wrote via email.

A Brief History of Fresno Redistricting

The current system of Fresno city council and mayoral elections has been in place since the 1996 election. That year, voters elected the first “strong mayor,” and a representative for the newly-created District 7.

In the 1970s, Fresno City Councilmembers Ted Wills and Joel Crosby lived across the street from each other.

Prior to 1979, there were six council seats and a mayor — all sharing equal power on the council dais. The mayor was in essence a seventh councilmember with the title being more ceremonial than powerful.

Council elections were separate; six different races with three contested every other odd-numbered year. However, there were no district residency requirements and the entire city could vote in each race.

Reforms approved by the voters in 1977 and implemented for the 1979 races established geographically-based council districts. Councilmembers were required to live in the district they represented. Former councilmembers Ted Wills and Joel Crosby used to live across the street from each other, according to a 1979 Fresno Bee story.

By 1981, only voters in the district could chose their councilmember instead of the entire city population. The city moved to even-year elections in 1994.

City voters reformed elections again in 1993, giving more power to the mayor. Instead of being one of seven voting members on the council, the mayor’s office became the executive branch of the city — complete with veto power on most everything but planning decisions.

The city’s charter recommends adding an eighth and ninth council seat if the city population reaches 650,000 — a number unlikely to be reached with the 2020 Census.

Related Topics:election mapsFresnoredistricting
Up Next