TUOLOMNE — At least two people drowned Friday in a Sierra Nevada swimming hole and divers were trying to retrieve a third person from the water, authorities said.

A woman and another person were pulled from the waters of God’s Bath in the Tuolumne River canyon and it was determined that they were dead, the Tuolomne County Sheriff’s Office said.

Search and rescue members and divers tried to retrieve a third person believed to be still in the water but suspended the search operation because of darkness and planned to resume, the Sheriff’s Office said. 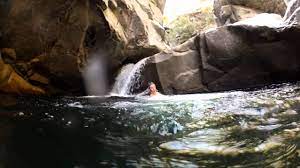 The swimming hole is a deep basin near a waterfall at the Clavey River in the Stanislaus National Forest, northeast of Yosemite National Park.

The popular but rugged swimming hole is surrounded by boulders and ledges. Swimmers can jump off them into the basin.

People posting on the Sheriff’s Office Facebook site said the river area has fast-moving and freezing currents this time of year.