But, trying to distribute $35 million in rental relief funds has been slow. Only about $1 million, or 2.9%, has gone to renters in financial hardship. 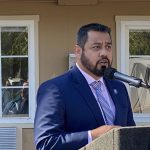 In a presentation to the council, deputy chief of staff Chris Montelongo said only 4,000 people applied for unpaid rent and utility relief. More than a quarter of those were disqualified for various reasons — mainly because applicants did not live within the city or they were duplicate applications.

Funds have gone to 278 applicants. The average rent relief disbursement is $4,676.

Arias said there is a June 15 deadline to distribute two-thirds of the rental aid that Fresno and several other cities are unlikely to meet. The city will ask for an extension.

“We are building this airplane as we fly it,” Arias said.

Several councilmembers and city officials agree more outreach is needed to encourage more applications and help filling out the forms.

“We need a constant reminder,” councilwoman Esmeralda Soria said. She suggested a flyer in the monthly water bill.

Other ideas were billboards and traditional media.

Despite a 6-0 vote, some councilmembers were uncomfortable with the language, or lack thereof, in the Eviction Protection Program.

What the city council passed was a framework of providing defense for residents who face “illegal” eviction. But, the key questions of what that term means, and how to pay for it remain unanswered.

Council president Luis Chavez said he was uncomfortable with the idea of providing money to a private party for a lawsuit. He said even under best scenarios, 48% of eviction defenses lose in court.

“If we can narrow this criteria down to where our city attorney can make an analysis and assessment based on what I just described, with both parties abiding by the rules that were set up, I think we can eliminate a lot of the concerns that I had initially with the original proposal,” Chavez said.

Chavez is willing to try a pilot program.

Councilman Nelson Esparza said the definition of unlawful evictions is defined in law.

“I trust the City Attorney’s office to develop a screening process that matches up against the most current definition of what is considered an unlawful eviction,” Esparza said.

The resolution did not include a funding source.

Members of advocacy groups, such as the Leadership Counsel for Justice and Accountability, and Faith in the Valley spoke during public comment. They generally applauded the eviction defense but hoped councilmembers would expand the proposal.

Advocates asked for legal defense for anyone receiving an eviction notice, and a longer-term funding model.

Arias supported the resolution as is, saying things need to start small and build later.

In addition to apartments and homes, the city can now inspect long-term motels/hotels. Code enforcement officers can now inspect more units if deemed necessary. Currently, only a percentage of units based on the size of a complex can be inspected. If those units are found in unsatisfactory condition, inspectors can look at more rooms.

Landlords have a shorter time to make corrections — now 45 days down from 90. And, the council voted to make it easier to adjust fines.

Councilman Garry Bredefeld — as well as Mayor Jerry Dyer — sat out the rental discussions based on a new interpretation of conflict-of-interest law.

City attorney Doug Sloan said public officials who own rental property with four or more units might be in conflict if voting on legislation involving tenant rights and landlord responsibilities. In an abundance of caution, he advised Bredefeld and Dyer to recuse themselves from Thursday’s discussions.

Bredefeld isn’t the only landlord among the city council, but he is the only one who owns a multi-unit building, according to financial disclosure records.

Councilmen Luis Chavez and Mike Karbassi own and rent out single-family homes.

All are properties registered with the city’s database, per law.