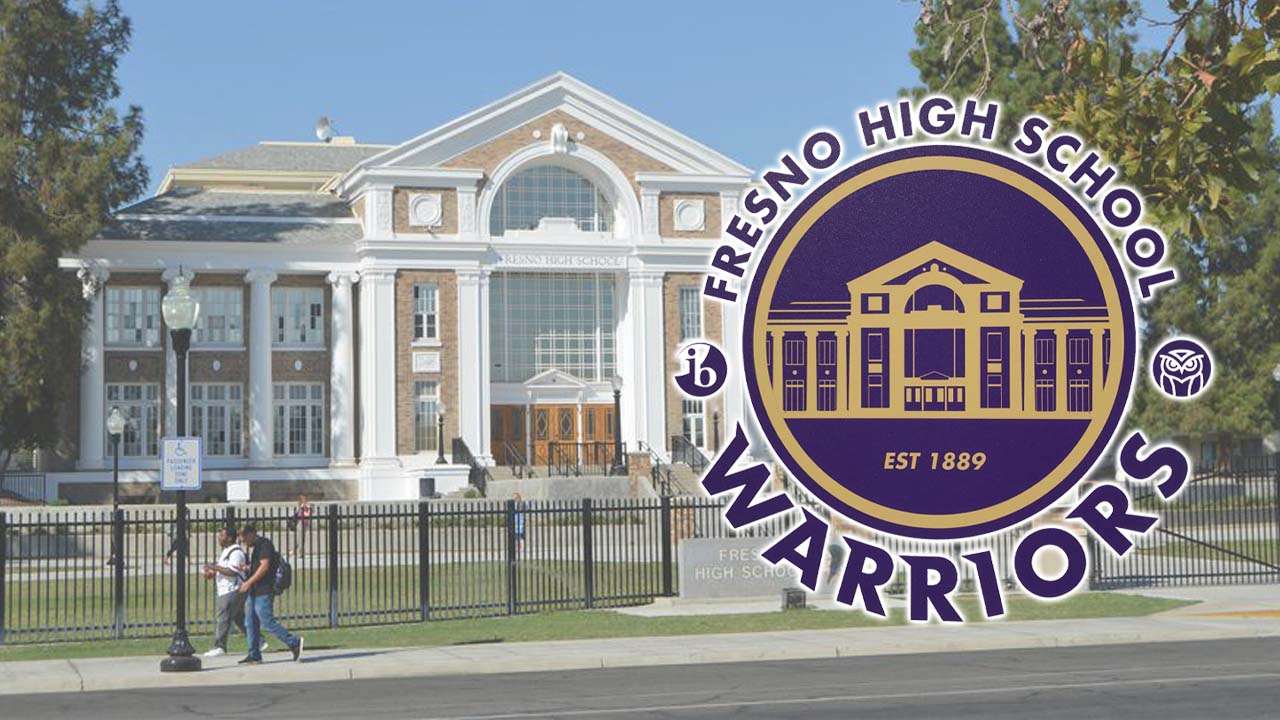 When the purple curtain covering a white board in front of Royce Hall was lifted, observers saw that the new logo is a line drawing of Royce Hall — the oldest building on the city’s oldest high school campus. 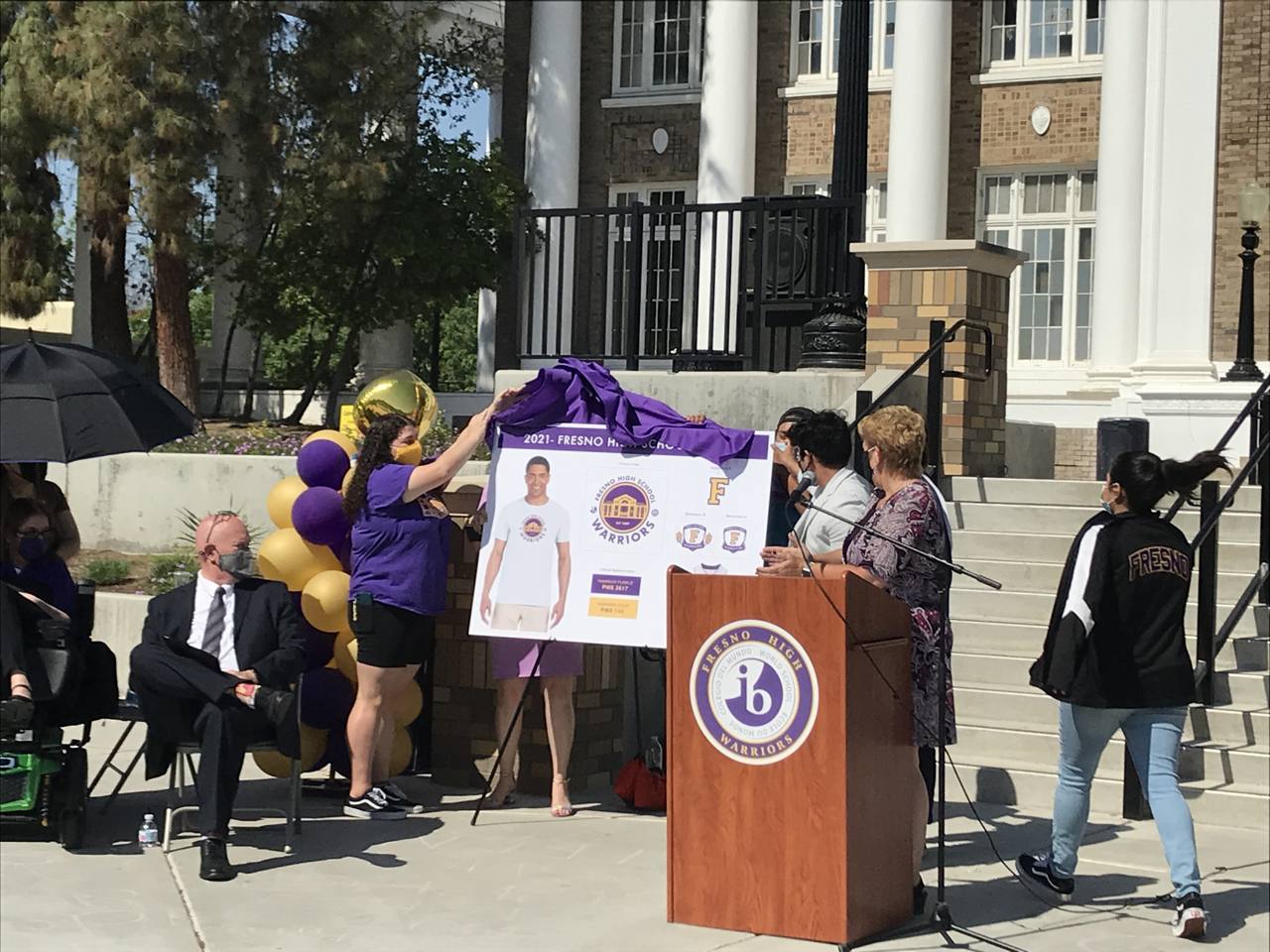 But just how soon that logo will be adorning more than the T-shirts and ballcaps handed out to dignitaries at Wednesday’s unveiling is anybody’s guess. Principal Linda Laettner said the school will present a budget request for the logo replacement to the School Board next week.

The district said in a preliminary report that the cost to replace the Native American Warrior logo would be at least $400,000, and could go higher. In addition to replacing stationery, signage, uniforms, and other paraphernalia, the school will be removing old Warrior images that are carved in granite, Laettner said.

Wednesday’s School Board meeting, which will be held at Gaston Middle School, includes a proposed budget change in the unrestricted general fund of $456,000 for the logo change. The budget category is “books and supplies.”

Fresno High students designed logo options, and an advisory panel of students, staff, alumni, and community members weighed in on the options and chose the final three, Laettner said. Fresno High’s students then voted on their top choice.

“When voting was complete, we had two images that were separated by two votes. Both images represented the strength and history that is Fresno High and our Warrior community, so we decided to incorporate both,” she said prior to the unveiling. “This morning we will unveil our new Warrior logo, along with the second image that will serve as a complementary athletic image.”

The Royce Hall image will be the primary mascot logo, and the letter F will be the secondary logo and used on uniforms, she said.

Fresno Unified Superintendent Bob Nelson recounted the history of the social media campaigns that erupted nearly two years ago around changing or keeping the mascot image and noted that the issue had created friction in the community.

Opponents said the image of a Native American man wearing a feathered headdress was racist and needed to be replaced. Supporters said the mascot was a beloved part of Fresno High tradition.

Native Americans weighed in on both sides of the issue. Some said the image was a caricature that did not honor their people and history, while others said that eliminating the image of Native Americans as sports team mascots is also disrespectful because it erases them from popular culture.

“As exciting as today is for so many of us, including our students who helped design and ultimately select this new logo, it’s also been an uncomfortable and complicated process, which we would be remiss if we didn’t acknowledge that publicly today,” Nelson said.

The School Board voted Dec. 9 to retire the former logo after a series of town hall meetings, focus groups, and surveys over many months.

Kelly Rector, a Fresno High alum who supports keeping the old Warrior logo, said she doesn’t understand why some people consider the image derogatory or racist. “It stands for pride and braveness,” she said Wednesday morning. “It’s nothing to be ashamed of.”

As she was being interviewed by GV Wire in the concourse area in front of Royce Hall, she was shooed off the school property by vice principal Vince Salazar. “You’re supposed to be outside the gate,” he told Rector, who responded that she hadn’t been aware.

Rector joined other placard-bearing protesters on the street side of the iron gates that mark the entrance to the Fresno High campus. Their shouts during the short unveiling ceremony at times nearly overpowered the speeches being amplified by the public address system.

The speakers included Fresno High Area Trustee Carol Mills, whose brief speech was delivered through a computer-generated voice as she sat in a green wheelchair. Mills acknowledged at the last School Board meeting that she has an as-yet unrevealed disability.

“The new Fresno High School logo honors Fresno High School’s history while respecting its diversity and modern sensibilities,” Mills said. “I would hope everyone, including all the alumni, will join me in embracing this new logo selected by the students who are our future alumni.” 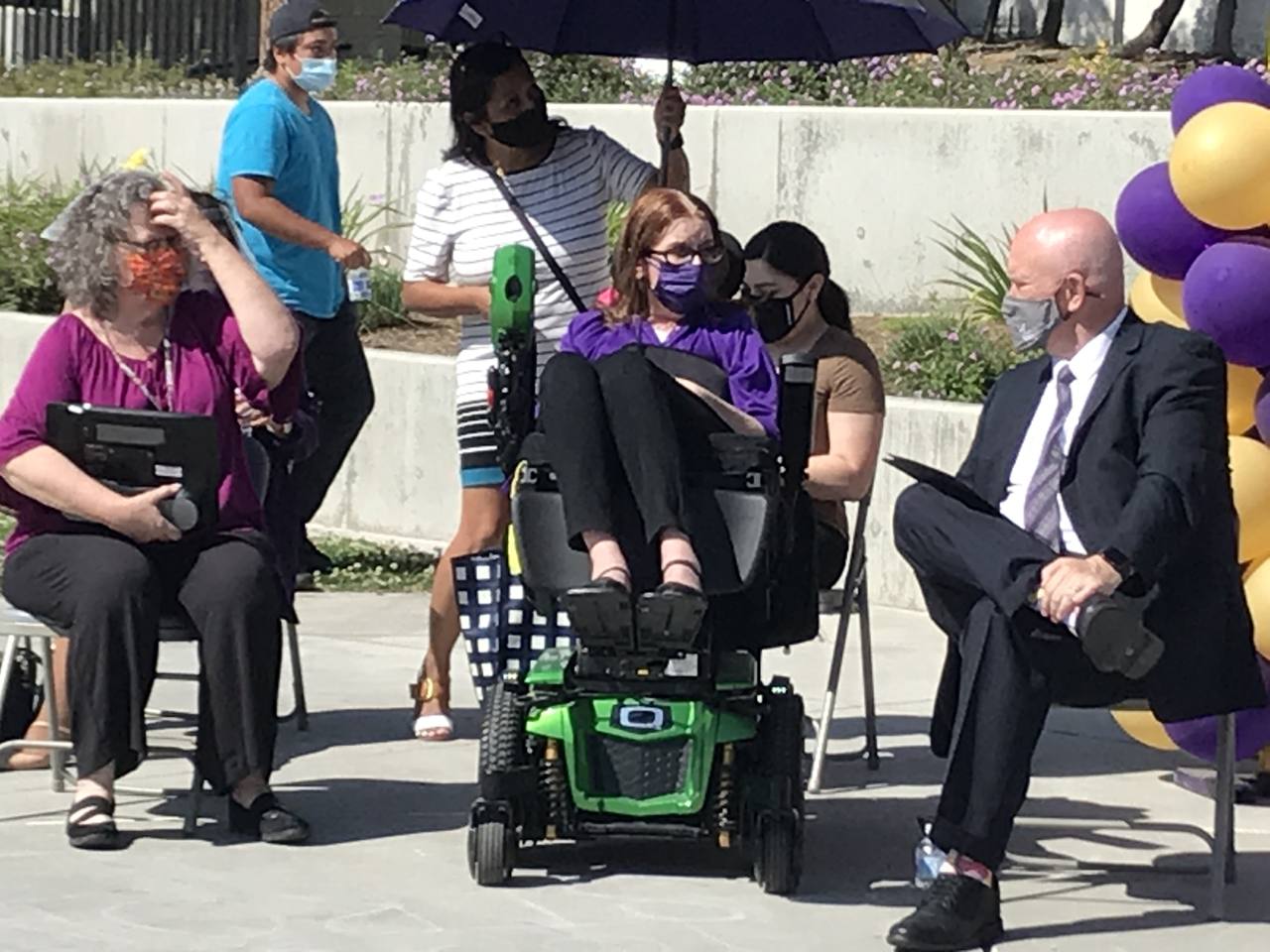 Nelson said later that the new logo is similar in style to the Golden State Warriors logo of the Bay Bridge. The logo for the team, which moved to San Francisco from Philadelphia, was originally a cartoon Native American figure.

Wednesday’s unveiling will not put a damper on a lawsuit by Fresno High alums and other supporters of the old mascot, attorney Ryan Griffith told GV Wire.

The lawsuit contends that the School Board and district violated the Brown Act during its deliberations and vote on changing the mascot image, including noting on the Dec. 9 School Board meeting agenda that there would be no financial impact. The Brown Act establishes rules for public agency meetings.

In the meantime, “I will be in contact with FUSD’s outside attorney Peter Denno to make sure no public funds are being spent to change any of the numerous logos across the campus before our litigation is complete,”  he said in an email to GV Wire. “If FUSD plans to spend public funds and make material changes before our litigation is complete then a TRO (temporary restraining order) may be necessary. However, it is my hope that this matter can be heard in a timely and efficient matter without the need to hear the issue on shortened time.” 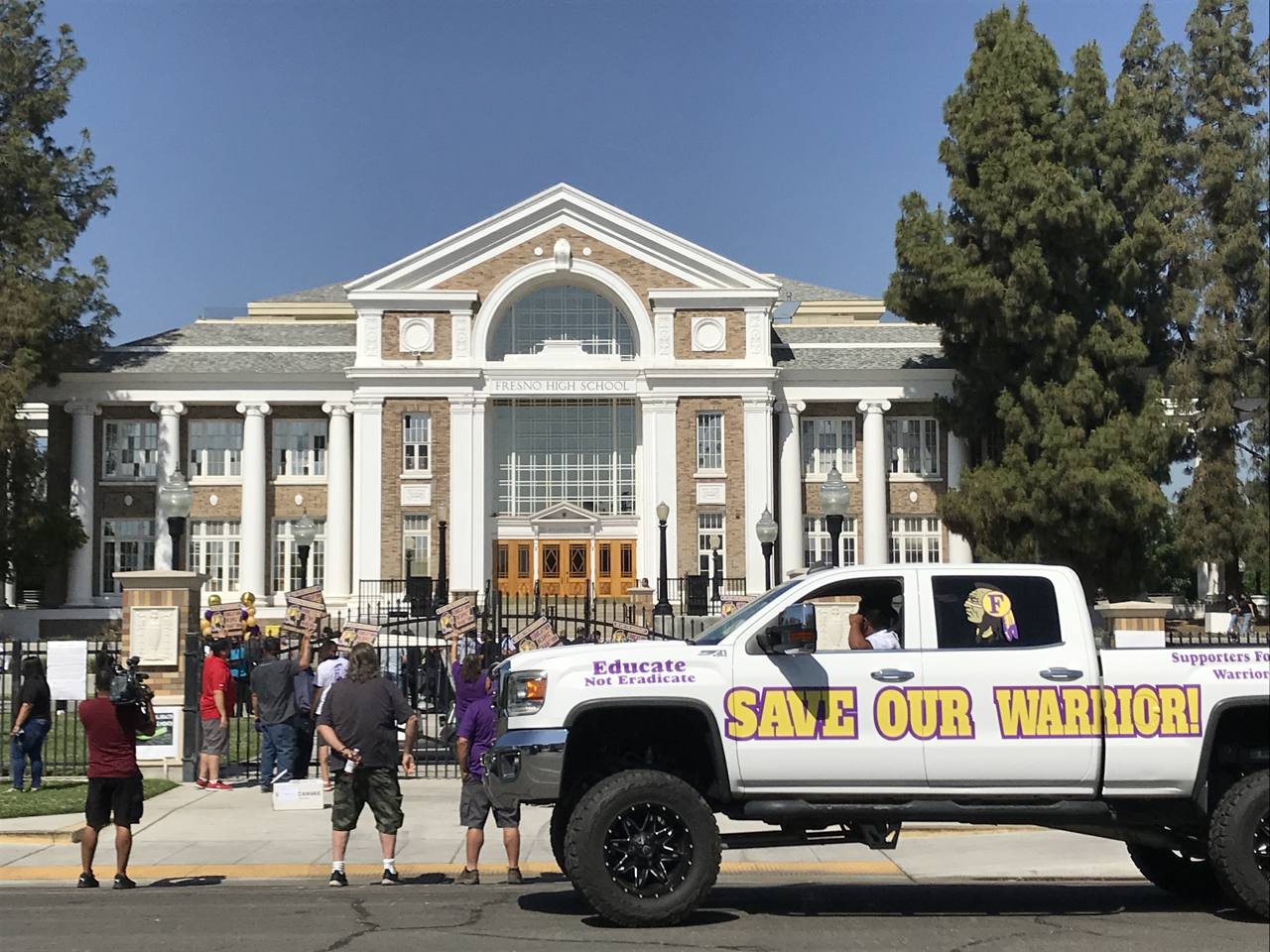 About a dozen people gathered Wednesday outside the Fresno High front gate to protest the mascot change. (GV Wire/Nancy Price)