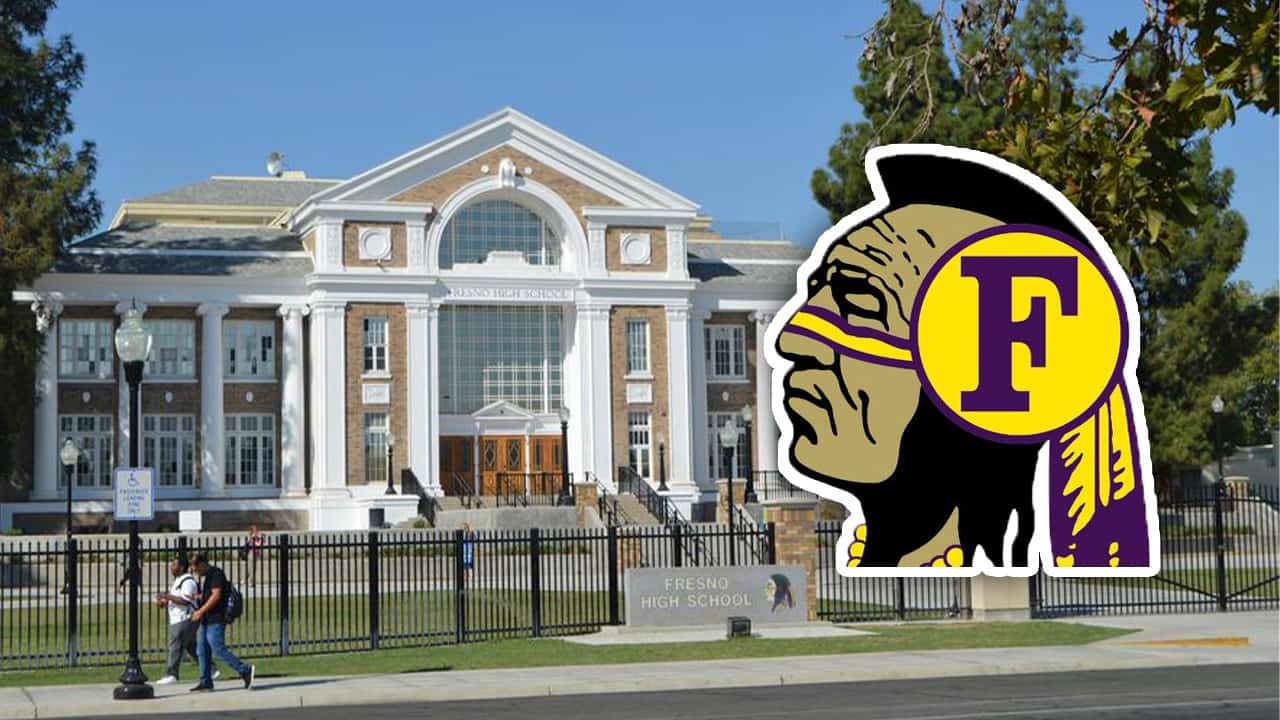 The campaign by hundreds of Fresno High alumni and other supporters to retain the school’s Native American mascot image intensified this week with a lawsuit asking the Fresno County Superior Court to intervene in the dispute.

At Wednesday’s School Board meeting, Nicholas Dodson of the Native American Guardians Association, which has worked with other schools considering changing a Native American mascot name or logo, carried the lawsuit to the dais to “serve” the board. He also brought them an armful of Fresno High pro-mascot T-shirts.

The lawsuit, filed Monday by San Francisco attorney Ryan Griffith on behalf of petitioner Jim Tuck, alleges that the School Board’s 6-1 vote on Dec. 9 to change the mascot image from a cartoon figure of a Native American warrior violated the Brown Act.

“The Fresno High Warrior is an item that is the source of passionate debate among several groups and must be opened for public discussion,” the lawsuit says. “The purpose of the Brown Act is to ensure all viewpoints are heard. The Brown Act does not allow legislative bodies to decide what the public should and should not know. …  All Petitioner and his supporters are asking for is a chance to be heard on this issue by requiring the Board to conduct a re-vote that is open to public comment.”

The board’s vote did not affect the Warriors mascot name but retires the image of a Native American man.

Griffith, who provided a redacted version of the lawsuit to GV Wire on Thursday, said Tuck is being replaced as the petitioner. “I think he would prefer not to have his name in public, and a group called Save Our Schools will actually end up being the Plaintiff/Petitioner,” he said in an email to GV Wire.

Tuck was one of numerous people who submitted written comments to the School Board for Wednesday’s meeting. He noted that the mascot logo supporters are growing in number and could become a potent political force.

“Our group is getting bigger every day. We just opened a nonprofit called “save our Schools” or “SOS” and we will also be starting recall petitions and running opponents against board members who will not listen to reason,” he said in the comment.

The civil suit has been assigned to the courtroom of Judge Mark Cullers. No hearings had been scheduled as of Thursday.

The lawsuit comes as supporters, some of whom say they are partly or wholly Native American, have continued to appear in person at School Board meetings, wearing T-shirts and waving placards that contain the image of the Native American mascot logo. 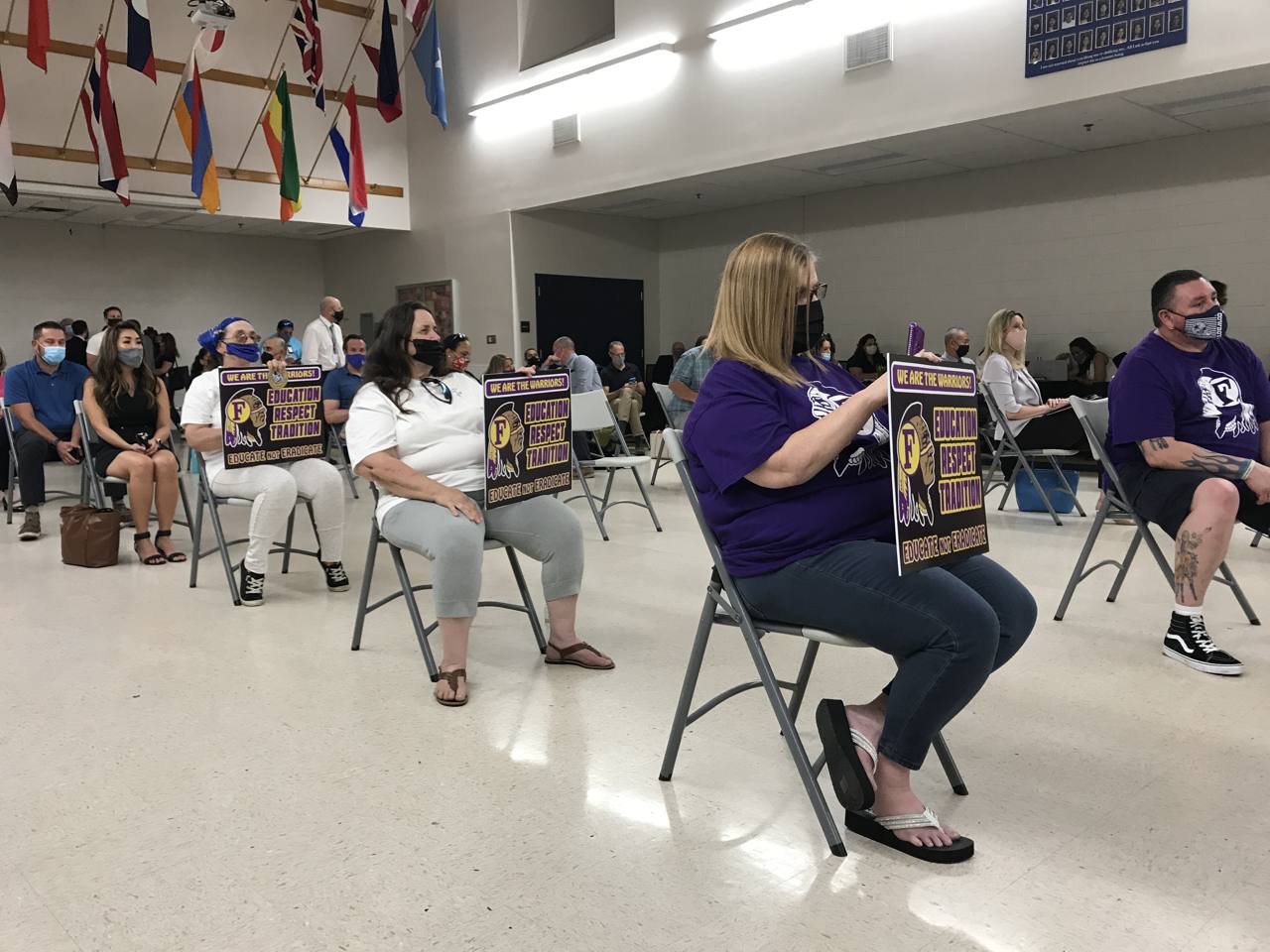 Mascot supporters who claim Native American blood say they are offended that the logo is being replaced because it is a denial of their heritage.

At Wednesday’s School Board meeting, Nicholas Willis of the Native American Guardians Association, which has worked with other schools considering changing a Native American mascot name or logo, carried the lawsuit to the dais to “serve” the board. He also brought them an armful of Fresno High pro-mascot T-shirts.

The group’s theme is “educate, not eradicate,” a meme that has been picked up by the Fresno High mascot supporters.

But in the meantime, the district is proceeding with replacing the mascot and has asked Fresno High students to weigh in on it. District spokeswoman Amy Idsvoog said the students completed their review in mid-April and the district will soon unveil the new mascot logo.

As for the lawsuit, Idsvoog said Thursday, “We’re reviewing it. It’s not our practice to comment on pending litigation.”

The lawsuit alleges that the district stated on the Dec. 9 meeting agenda that changing the mascot would have no fiscal impact, that the district had previously said no decision would be made on the mascot until students returned to school, and that public input on the debate was limited because of the constraints imposed by the COVID-19 pandemic.

But the district subsequently estimated it could cost at least $400,000 and likely much more to replace or remove all of the Native American logo images used by Fresno High.

In the months leading up to the Dec. 9 meeting, when the district conducted virtual focus groups and other meetings, students were on distance learning and not attending class at Fresno High.

The school district’s attorney also contends that mascot supporters waited too long to lodge their complaint about Brown Act violations. The Brown Act sets the rules for public meeting notifications in California, but sets a deadline for filing complaints.

However, Griffith, the plaintiffs’ attorney, maintains that the COVID-19 pandemic not only constrained public participation in the deliberation process, but also should be considered as a mitigating factor when considering Brown Act deadlines.

Cellmate Suspected in Killing of Man at Corcoran Prison