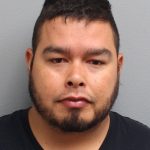 In all, the jury in a Visalia courtroom found Martinez, a Tulare resident, guilty on 10 felony counts.

The crimes occurred between January 1, 2012, and February 10, 2017, against the girl, who was less than 8 years old at the time the sexual assaults began.

Martinez faces a maximum sentence of nearly 50 years in prison. He must register as a sex offender for the rest of his life.

His sentencing is set for June 23 back in Department 6 of the Visalia court.