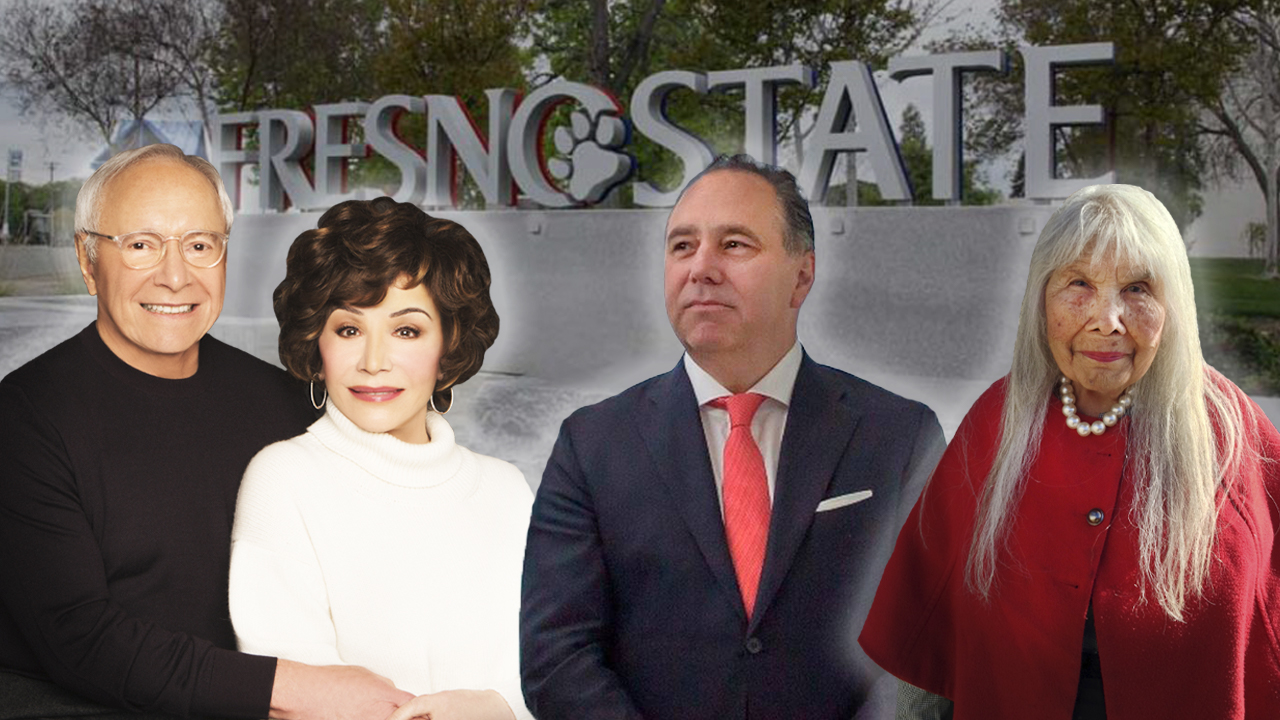 Honorary doctorates are awarded on behalf of the California State University system and Fresno State in recognition of excellence and extraordinary achievement in significant areas of human endeavor that embody the objectives and ideals of the CSU system.

The four honorees are Julia F. Parker, Lynda and Stewart Resnick, and Todd Suntrapak. Each will be recognized during a private ceremony at which they are hooded with academic regalia specific to the doctoral degree they are receiving, and they will also receive a crystal award.

Julia F. Parker will receive an honorary degree of Doctor of Fine Arts. Parker, a renowned basket weaver, received the National Heritage Fellowship in 2007 from the National Endowment for the Arts.

In 1983, Queen Elizabeth II visited Yosemite and Parker gave the queen one of her baskets. Today it is in the Queen’s Museum in Windsor Castle.

Born in Kashaya Pomo territory in Sonoma County, Parker spent most of her life in the Yosemite Park area. Her early teachers were elder Native traditionalists and basket weavers of the Sierra Miwok and Kucadikadi Paiute people.

Parker’s work has been featured at the National Museum of the American Indian and the National Museum of Natural History, both part of the Smithsonian Institution in Washington, D.C., and the Heard Museum in Phoenix, Arizona. In 1983, Queen Elizabeth II visited Yosemite and Parker gave the queen one of her baskets. Today it is in the Queen’s Museum in Windsor Castle.

Parker has been a central figure in the organization and ongoing activities of the California Indian Basket Weavers Association. Her contribution to the Yosemite area helps to preserve the heritage of the region, and as such, is in keeping with the values and mission of Fresno State.

Stewart and Lynda Resnick, entrepreneurs, philanthropists, and owners of The Wonderful Company, have balanced achievement in business with a dedication to giving. To recognize the influence they have had on business, agriculture, marketing and philanthropy, Lynda Resnick will be awarded an honorary degree of Doctor of Humane Letters and Stewart Resnick will receive an honorary degree of Doctor of Science.

The Resnicks made a $10 million investment in 2019 toward the Lynda and Stewart Resnick Student Union, currently under construction at Fresno State, the largest-ever philanthropic gift made to a student-life initiative at the university. A portion of this investment will be used to create The Wonderful Scholar Center within the new student union, a dedicated space where the more than 200 Wonderful Scholars scholarship recipients attending Fresno State will receive tutoring and counseling. The Resnick Student Union is expected to be completed in 2022.

The Resnicks made a $10 million investment in 2019 toward the Lynda and Stewart Resnick Student Union, currently under construction at Fresno State, the largest-ever philanthropic gift made to a student-life initiative at the university.

Lynda Resnick is vice chair and co-owner who also oversees worldwide marketing, product development, and corporate social responsibility efforts for The Wonderful Company. Throughout her career, as commercial success has grown so has her dedication to philanthropy. She personally guides The Wonderful Company’s philanthropic endeavors, the heart of which focuses on wide-ranging efforts to enhance the lives of people in the communities where its employees live and work. Stewart Resnick serves as the company’s chairman and president. He sits on the board of trustees for the California Institute of Technology, Bard College, and Conservation International.

In 1994, the Resnicks established Wonderful Education, whose robust education initiatives have enriched the lives of more than 117,000 young people in the Central Valley. The company’s health and wellness programs provide free primary health care and medicine to 2,500 students at Wonderful College Prep Academy and to 4,000 employees and their families in the Central Valley. This work has achieved notable improvements in health outcomes, including a 51% reduction in prediabetes over the past five years.

Under Suntrapak’s leadership, Valley Children’s Healthcare has achieved recognition in U.S. News & World Report as one of the “Best Children’s Hospitals” in the nation.

Under his leadership, Valley Children’s Healthcare has achieved and maintained an AA rating from Standard & Poor’s and recognition in U.S. News & World Report as one of the “Best Children’s Hospitals” in the nation.

Acutely aware of the high rates and damaging consequences of childhood poverty, chronic disease, and food insecurity, Suntrapak shaped the organization’s vision for the future to address children’s health where they live, learn, and play. Valley Children’s launched the Center for Community Health, a center that is positioned to change the trajectory of children’s health.

Fresno State said it values the partnership between the university and Valley Children’s Healthcare to help ensure the health and safety of the campus community, through monthly COVID testing for those on campus and a COVID vaccination clinic for campus employees.