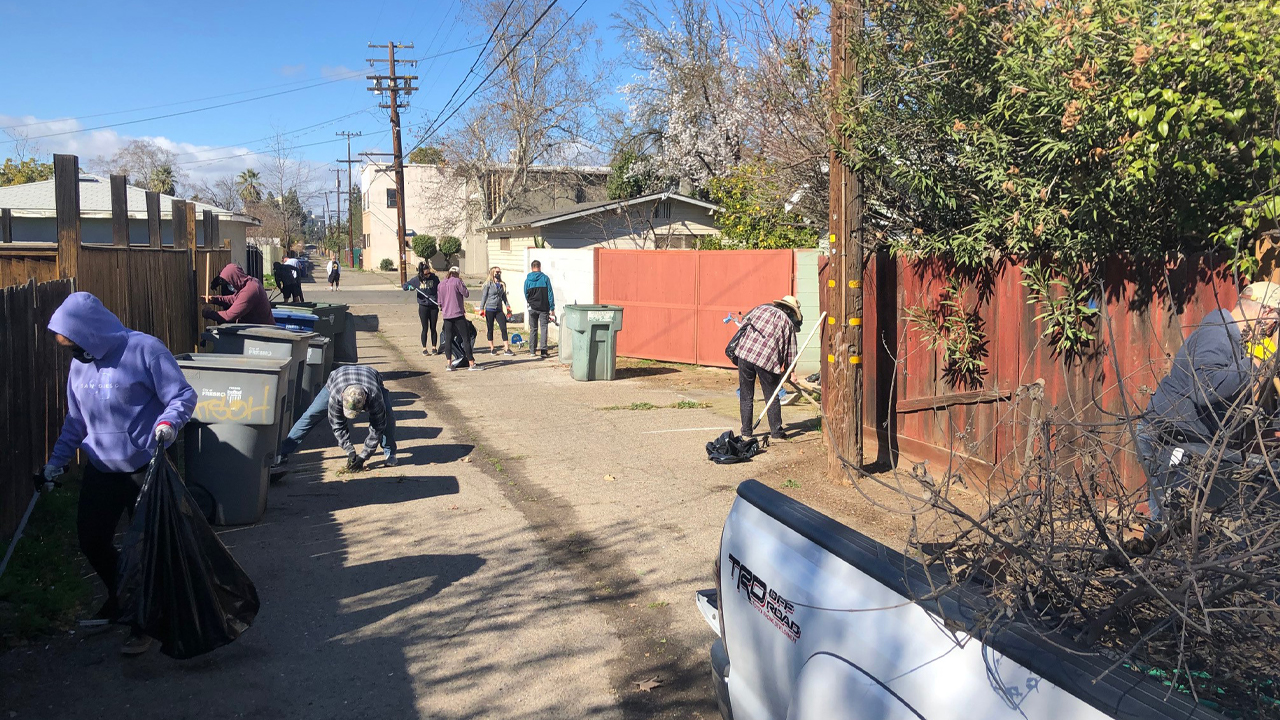 If you’ve driven Freeway 41 recently, you might have noticed that the homeless encampments are gone.

All around town, streets and alleys are starting to sparkle after the removal of litter, trash, and dumped couches.

Trees are being trimmed, sidewalks repaired, and graffiti removed.

Every Fresno mayor I’ve covered has vowed to make the city cleaner and greener and had varying degrees of success.

But Jerry Dyer is attacking trash like a shark chases blood in the water. Or an old police chief taking a bite out of crime.

The hope is, the effort will pay big dividends in the months and years ahead. The mayor envisions businesses coming to Fresno, more downtown investment, and a better quality of life.

Related Story: Nursing Scholarship Donation Is an Investment and a Thank-you

“They’re like locusts when they go into a neighborhood,” Dyer says. “It’s great to see so many people signing up. We’re restoring Fresno’s curb appeal and putting the pride back in the neighborhoods.”

Saturday will be the biggest day yet. The citywide Great American Cleanup will involve 12 projects and 800 volunteers. Everything will happen simultaneously from 10 a.m. to noon.  Afterward, there will be a  Chukchansi Park celebration with food trucks, music, and activities. 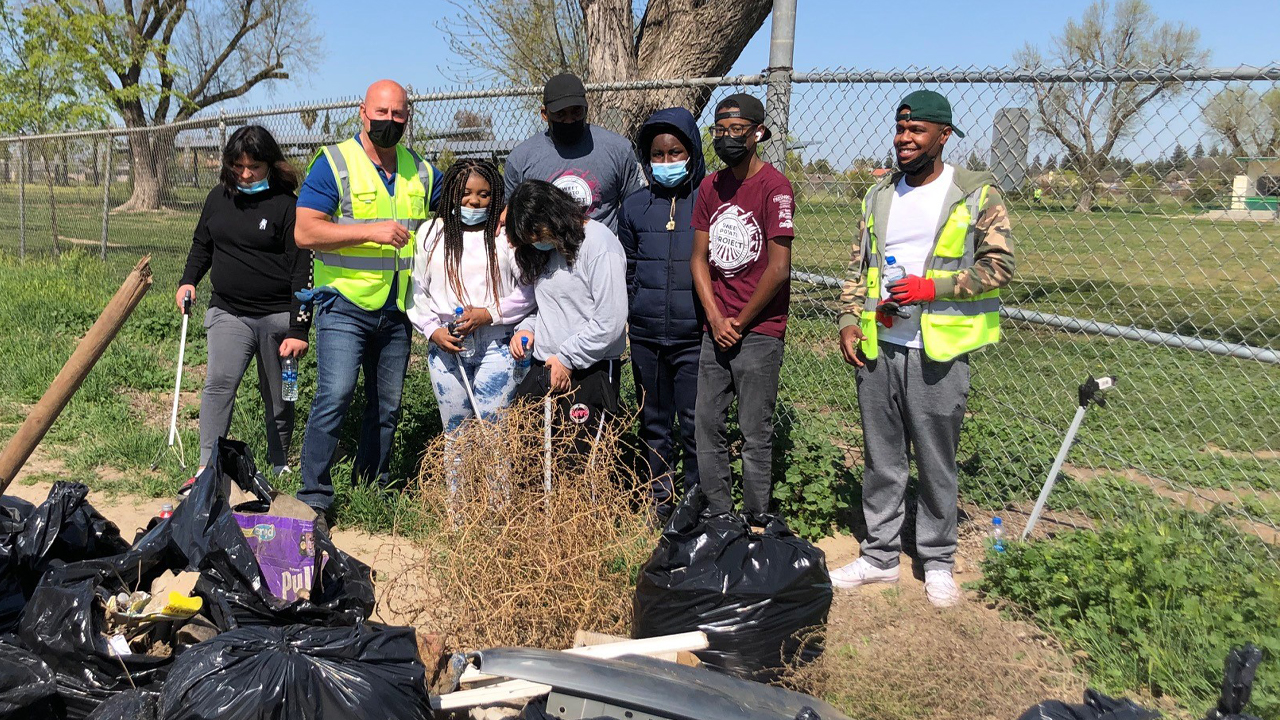 James and Deborah Fallows traveled 100,000 miles researching “Our Towns,” which became a best-selling book and a documentary now airing on HBO. They came up with 10 signs that a city is on the upswing or has successfully reinvented itself.

The hope is that volunteerism and civic pride grow into a big part of Fresno’s DNA.

Topping the list: People work together on local practical possibilities, rather than allowing bitter disagreements about national politics to keep them apart.

Nothing is more local than the look of your neighborhood. When litter clogs the gutters and shopping carts fill corner lots, a why-should-I-care? attitude emerges. It weakens the neighborhood as surely as rust corrodes metal.

Not only is Dyer giving neighborhoods new life, he’s providing an avenue for people to take part in the solution. The hope is that volunteerism and civic pride grow into a big part of Fresno’s DNA.

Getting Ahead of the Problem

One of Dyer’s first moves was creating the Beautify Fresno division at City Hall. Leading the effort is Mark Standriff.

“This is a passion for me, just like it is for the mayor,” said Standriff, the city’s former spokesman who is now grappling with trash instead of wrestling with reporters.

“I like having a singular focus that produces tangible results. My mission is this: What can I do every day to make Fresno look better?”

Along with sprucing up neighborhoods throughout Fresno’s 116 square miles, the goal is getting ahead of problems. For example, illegal dumping is removed as soon as sanitation workers see it or a resident reports it, Standriff said. No more waiting for a particular neighborhood’s turn on the clean-up schedule.

Councilman Tyler Maxwell is passionate about trees as well. On Earth Day, families living near Robinson Park planted 10 trees at the park. Those trees fulfilled Maxwell’s pledge of “100 Days, 100 Trees” as the new east-central Fresno representative.

Dyer’s biggest accomplishment: Moving homeless people off Fresno’s freeway embankments, where they’ve dugs holes, lit fires, and spread trash. For years, local officials have been frustrated by the fact that Caltrans — not the city of Fresno — was responsible for the freeways.

“We had 182 people living on Highway 41, now there are zero. Altogether, with the other freeways, we have housed 225 people.” — Mayor Jerry Dyer

But that hurdle finally was cleared, and Dyer says the city now has “an incredible relationship” with Caltrans.

“We don’t displace people,” Dyer said. “We house them through our partnerships with Fresno Rescue Mission, Poverello House, Fresno Housing Authority, and Kings View. There were 182 people living on Highway 41, now there are zero. Altogether, with the other freeways, we have housed 225 people. By the end of May, we expect to have everyone living on the highways housed.”

The smart hard work of H Spees must be acknowledged. Just like Dyer told Standriff that the buck stops on his desk for trash, Spees is responsible for reducing homelessness.

“Everything we do must be sustainable and we must be accountable for our actions,” Dyer said. “But I want the people of Fresno to know that we work for you. Together, we’re going to recover from this pandemic. The future is bright.” 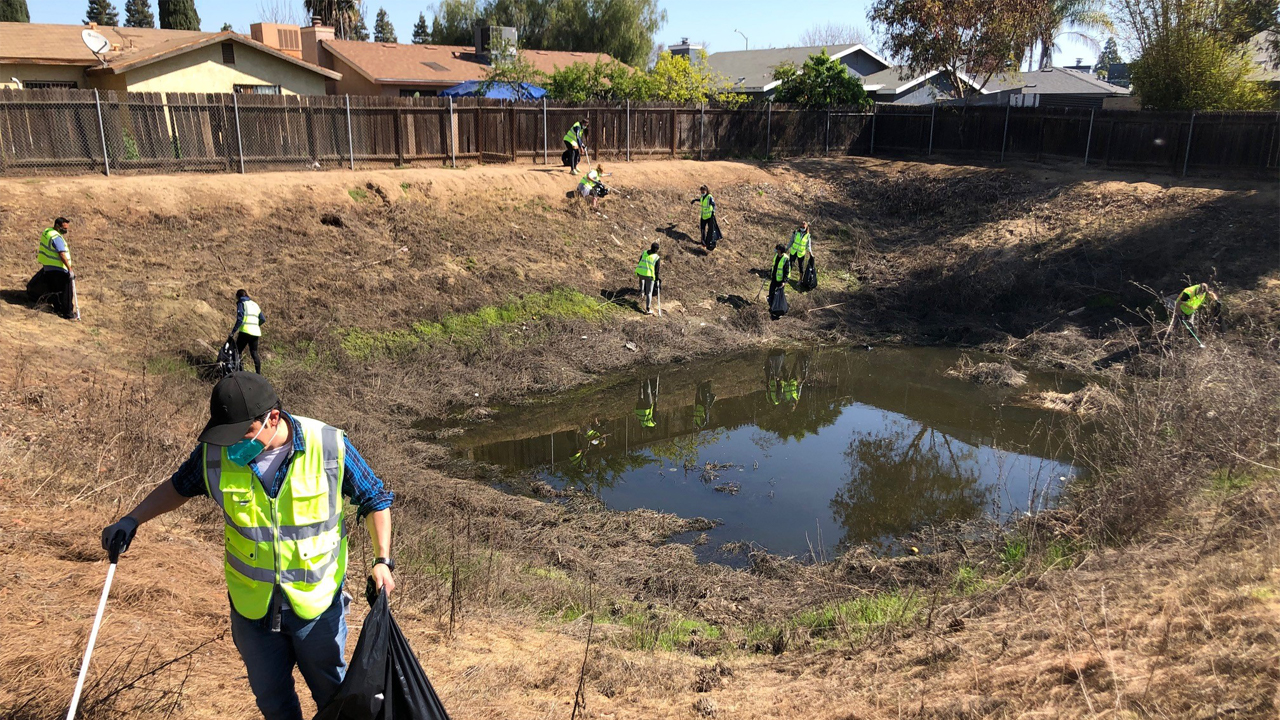