H. Roger Tatarian got his start in journalism at Fresno State, rose through the ranks at United Press International to become its top editor, and returned to his hometown to teach at Fresno State.

Now the late Fresno native is being nominated by community members to be the namesake for Fresno Unified’s new alternative education campus at Ventura and 10th streets.

“Many names have surfaced already and although those names may be noteworthy, we are the largest ethnic population left that has been ignored. Our Armenian community has given much to our city, county and state-it is time that the 3rd largest school district in our state recognize our contributions.” — Fresno Unified trustee’s liaison Michelle Asadoorian

It would be an appropriate choice, because Tatarian grew up around the area of Ventura and 10th and because he was a prominent journalist and respected teacher, said Jim Boren, former executive editor of The Fresno Bee and now executive director of the Institute for Media & Public Trust at Fresno State.

In addition, Fresno Unified, the state’s third-largest school districts, has no school facilities named for an Armenian American, even though the city became home to a sizable community of refugees fleeing the Armenian genocide in the early years of the last century and now is home for their many descendants.

Boren told GV Wire on Thursday that he agreed to help get the word out about Tatarian’s nomination after hearing from various community members who first floated the idea. So he turned to Facebook with a post about the proposal.

Fresno City Councilmember Mike Karbassi endorsed the idea this week, calling it “terrific” in a Facebook post and urging people to fill out the district’s naming survey.

Michelle Asadoorian, the liaison for Bullard High School region trustee Terry Slatic, backs naming the school after Tatarian, too. She also pointed out that the district has yet to name a campus after an Armenian.

“Many names have surfaced already and although those names may be noteworthy, we are the largest ethnic population left that has been ignored,” Asadoorian said in a Facebook post. “Our Armenian community has given much to our city, county and state-it is time that the 3rd largest school district in our state recognize our contributions.”

Asadoorian is a former district trustee representing the Bullard area.

It appears the Fresno City Council may also weigh in on the naming. The agenda for next Thursday’s council meeting includes a resolution proposed by Councilmember Luis Chavez to name the campus for Francine and Murray Farber, “given their many contributions to the youth of the City of Fresno.” Chavez is married to Fresno Unified Trustee Elizabeth Jonasson Rosas.

The Farbers created the “Steve’s Scholars” program in memory of their son Steve, who died unexpected in 2001. All Tehipite Middle School students are eligible to earn two-year, $1,000 college scholarships for two years but must maintain at least a B average, have at least 95% attendance, take college preparatory courses, and complete community service annually to be eligible.

The Fresno State website says that after Tatarian graduated from Fresno Unified, he got his degree from Fresno State in 1938 and then signed on with United Press International. He worked as a war correspondent during World War II and then worked in various overseas posts as he took on more challenging jobs at UPI. In 1967 he was appointed editor-in-chief, a job he held until his retirement in 1972. 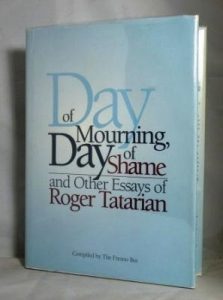 A book of Tatarian’s essays was published in 1995. (abebooks.com)

He returned to Fresno as a journalism instructor in the Media, Communications and Journalism Department at his alma mater for 15 years. He also served as an informal writing coach at The Bee and other newspapers. Tatarian, who died in 1995, was posthumously inducted into the MCJ Alumni and Friends Chapter Hall of Fame in 2010.

The Roger Tatarian Endowed Chair in Journalism was established in his honor and was principally funded by the McClatchy family, former owners of The Bee.

Tatarian would appear to be an apt candidate to be a school namesake under the Fresno Unified School Board bylaws, which state that schools may be named for individuals, living or dead, who have made outstanding contributions to the county or community or of significance on a state, national, or worldwide basis, or the geographic area in which the school is located.

The deadline to submit a nomination, using Fresno Unified’s survey link, is May 7. The trustees will review the nominations and then select a name.

The V-10 campus will centralize the district’s alternative education campuses now at Cambridge Continuation High School and J.E. Young Academic Center, plus the eLearn Center, and will include career technology classrooms, dual enrollment programs, and a child care facility. The project, which is being built on the site of the old Fresno County juvenile hall, is projected to cost $60 million.