What goes through your mind when you cross a bridge?

Perhaps you don’t give it a thought. Or maybe you flash to the 2007 Mississippi River bridge collapse in Minneapolis that killed 13 and injured 145.

In California, there are 1,536 bridges and over 14,220 miles of highway in poor condition, according to the Biden administration, which is pushing a $2.3 billion infrastructure package.

Some of those bridges needing repair are in Fresno and other Valley locations.

“I had no idea,” Jocelyn Delgado told GV Wire in the Vallarta parking lot when asked if she knew the most traveled and structurally deficient bridge in Fresno was within eyesight. 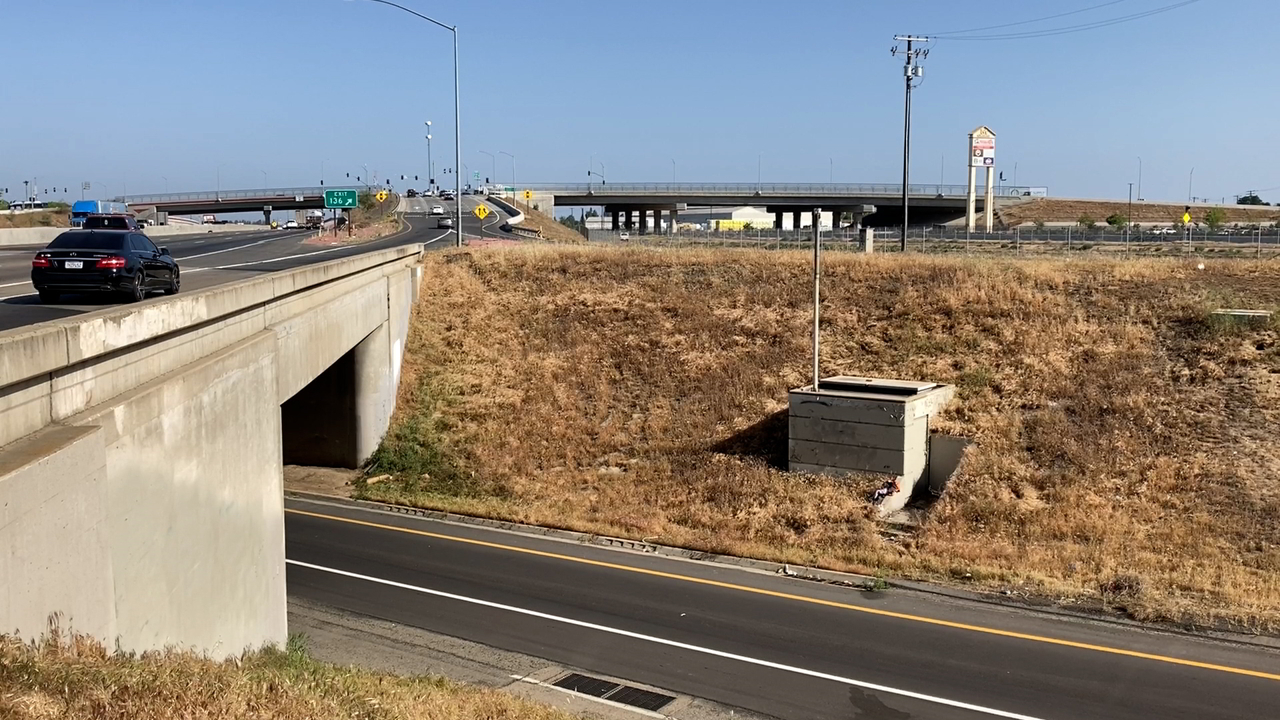 Fresno’s busiest and most structurally deficient bridge, according to the American Road & Transportation Builders Association, is just southwest of the Vallarta Supermarket near Clinton Avenue. (GV Wire/Jim Jakobs)

The American Road & Transportation Builders Association cites the bridge as Fresno’s busiest and most structurally deficient.

If you ask Caltrans, they’ll tell you the bridge in question is located at the Highway 99 offramp to Motel Drive. But, if you look that up on a map, well — good luck.

Motel Drive is officially Golden State Boulevard. The bridge lies just southwest of the Vallarta at Highway 99 and Clinton Avenue. 126,000 cars, trucks, and or motorcycles a day drive over it likely without even knowing it, according to Caltrans estimates. 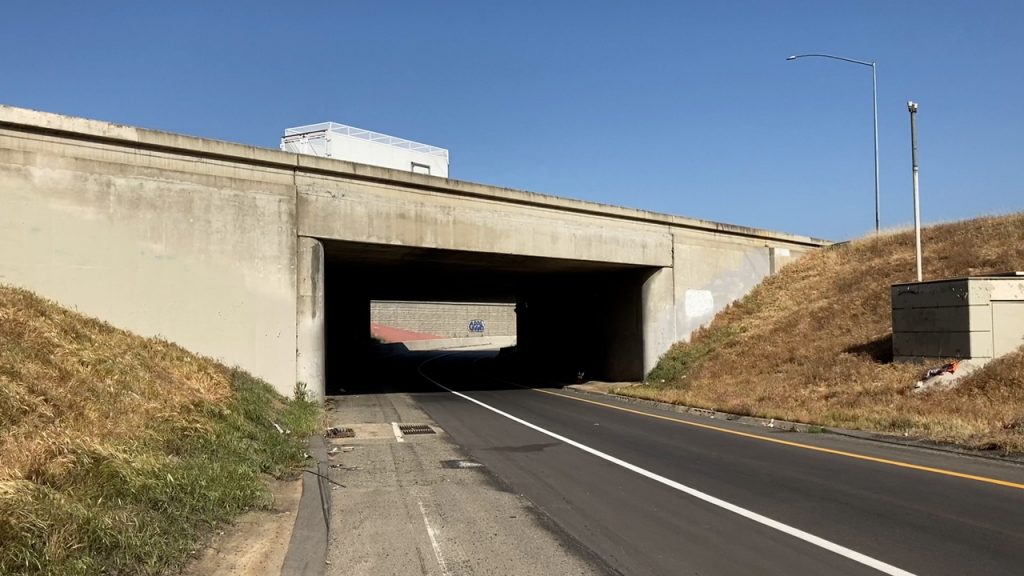 126,000 cars, trucks, and or motorcycles a day drive over this structurally deficient bridge. (GV Wire/Jim Jakobs)

GV Wire made a stop to inspect the bridge firsthand Wednesday morning. We made our way up the tall grass hillside next to it to gain a better view.

It’s easy to see why people traveling on Highway 99 might have no idea they’re using a bridge. It’s over the top of a one-lane access road leading past the Three Palms Mobile Home & RV Park.

Other Valley bridges made the American Road & Transportation Builders Association’s list of bridges in poor condition.

One bridge, State Route 180 over the Kings River overflow, was built in 1921. That same year, the United States and Germany signed the Treaty of Berlin ending World War I.

ARTBA points out that California’s infrastructure continues to deteriorate. Five years ago, 1,204 bridges were classified as structurally deficient. And, by the association’s count, about 6% of all bridges in the state need repair.

The Biden White House is amplifying the push for its $2.3 trillion infrastructure package with the release of state-by-state breakdowns showing the dire shape of roads, bridges, the power grid, and housing affordability.

The administration is banking that the data will confirm the everyday experiences of Americans as they bump over potholes, get trapped in traffic jams, and wait for buses that almost never correspond to published schedules.

In his American Jobs Plan, Biden says more than $600 billion is allocated to the nation’s transportation infrastructure,  including $115 billion for road and bridge repair.

“Looking at the infrastructure package overall, it would be transformational and it would really help our state and the whole country stay competitive,” says Edie Irons, communications director of TranformCA— a transportation advocacy group.

Republican lawmakers have been quick to reject the infrastructure proposal from Biden. They say just a fraction of the spending goes to traditional infrastructure, as $400 billion would expand Medicaid support for caregivers and substantial portions would fund electric vehicle charging stations and address the racial injustice of highways that were built in ways that destroyed Black neighborhoods.

“We have a number of bridges that we do need to replace repair,” Madera County Supervisor Rob Poythress tells GV Wire. “But unfortunately, I think about 20 percent of the proposed funding (in the Biden plan), about $400 billion, is supposed to go to the SEIU for their programs, for home care.”

Valley Has Many Old Bridges 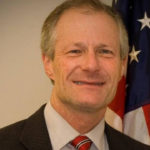 “The bridges are so bad in California, but especially bad in our eight-county region.” — Madera County Supervisor Rob Poythress

“The bridges are so bad in California, but especially bad in our eight-county region,” says Poythress. “Many of our bridges were built, you know, 50, 60, 70, 80 years ago, and not much has been done to reinforce them.”

In Madera County, Poythress says the good news is, crews recently finished repairing and opening up the Avenue 23 bridge on Dry Creek near the truck stop. Things have somewhat improved in the county since TransformCA did a report in 2013 that showed 32% of all Madera County’s bridges needed structural work.

ARTBA estimates that repairs are needed on 148 bridges in the Fresno area, which will cost an estimated $223.5 million. That’s better than in 2016 when 227 needed repairs. 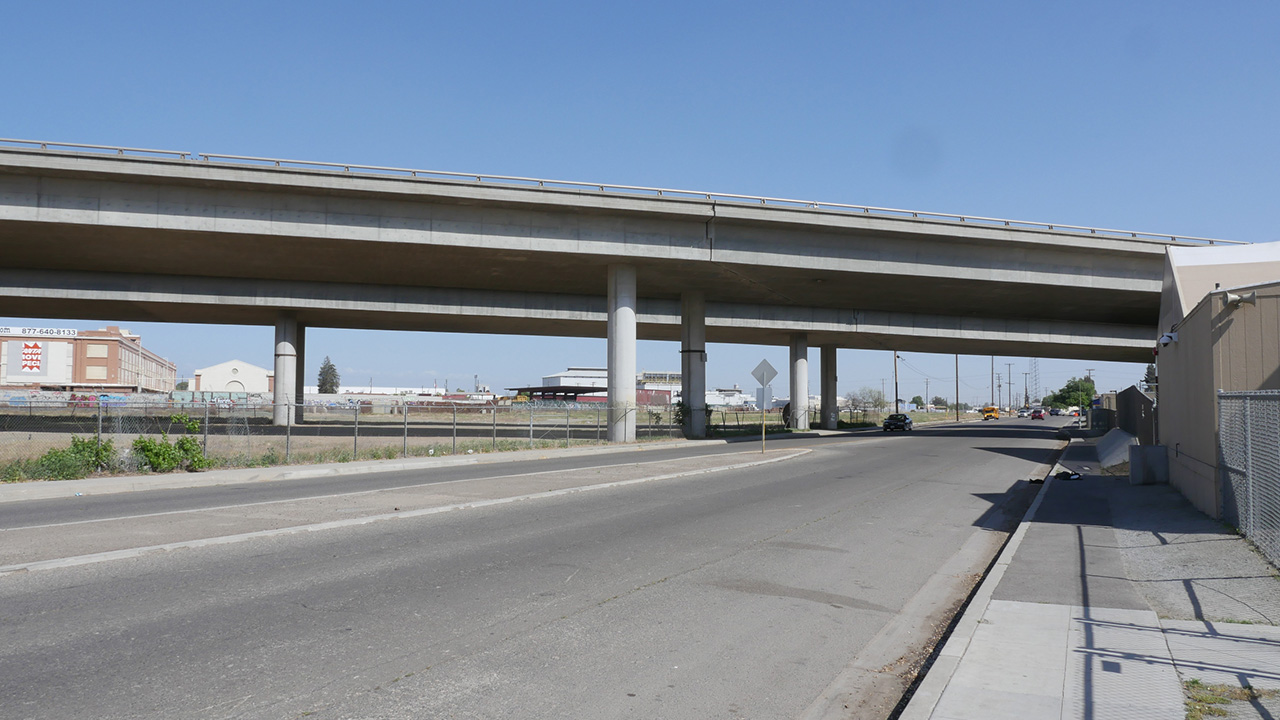 The southbound Highway 41 and G street offramp bridge is on the list. (GV Wire/Jahz Tello)

On Monday, the White House gave most states a letter grade on their infrastructure. West Virginia earned a D. So did Biden’s home state of Delaware.

Of the states rated, the highest grade went to Georgia and Utah, which each notched a C-plus. The lowest grade, D-minus, went to the territory of Puerto Rico.

California came in with a C-minus. 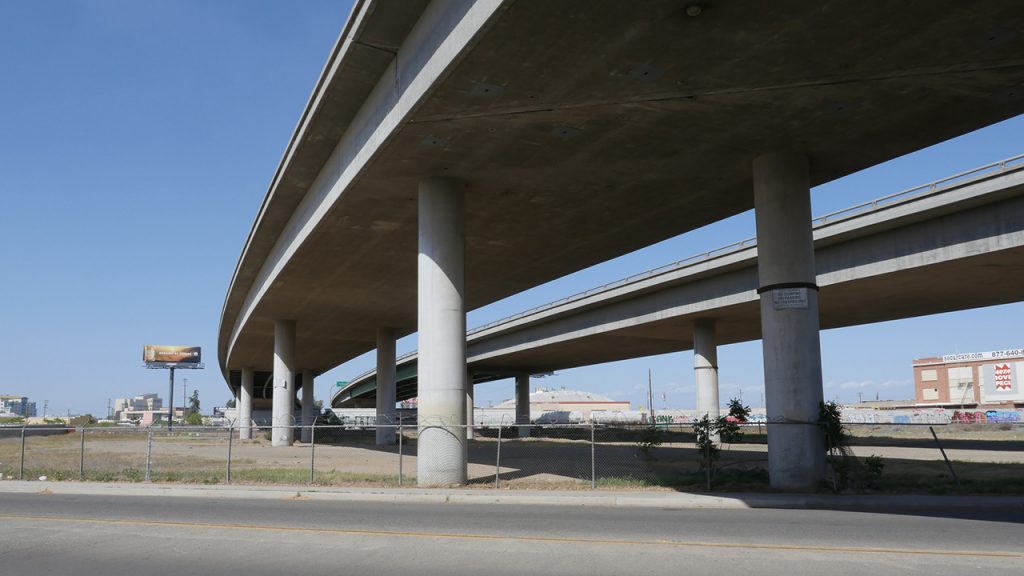 The Highway 41-Golden State Bridge is on the list. (GV Wire/Jahz Tello)

ARTBA compiled a list of the most traveled structurally deficient bridges in the Fresno region. Daily crossings are ARTBA figures. 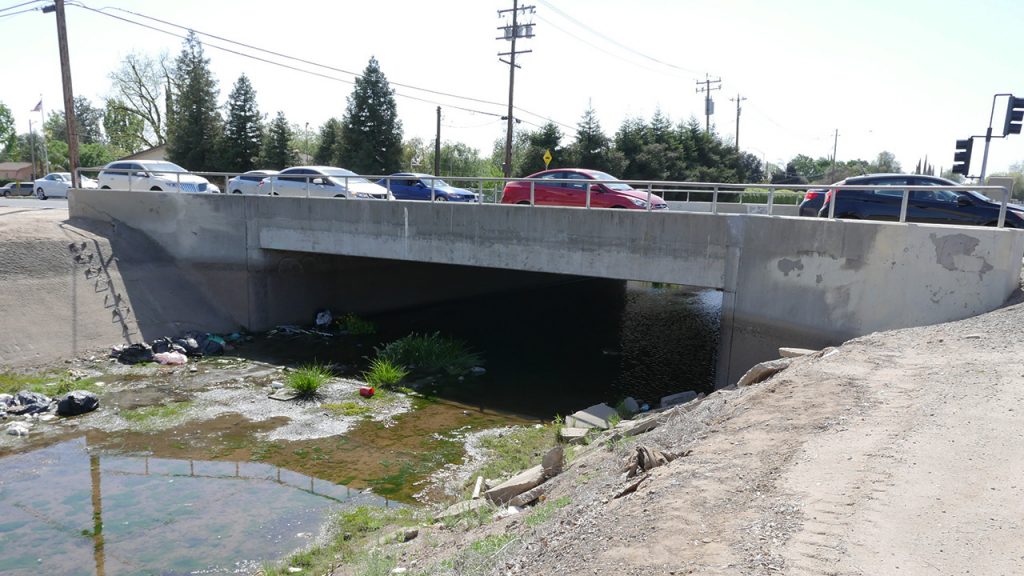 East Shields Avenue over Dry Creek is on the list. (GV Wire/Jahz Tello)