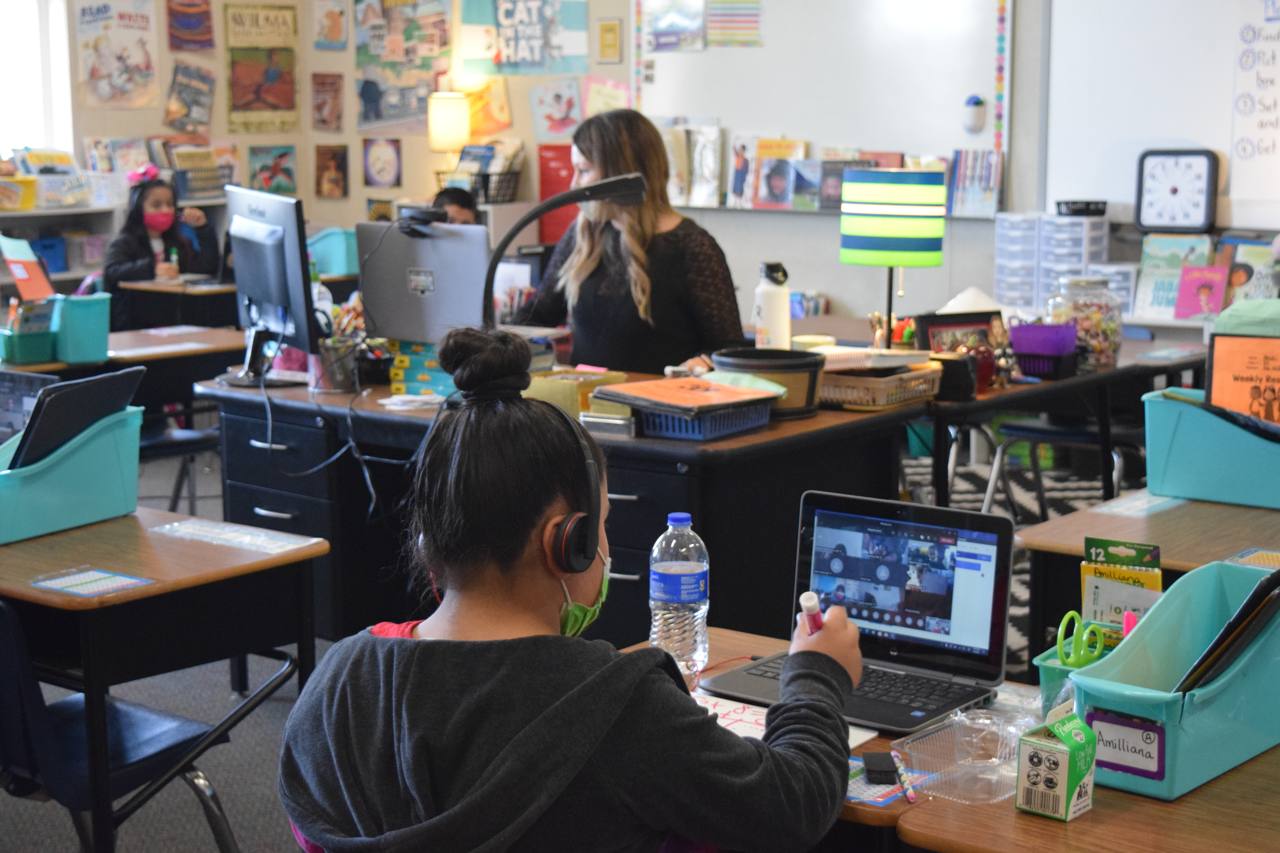 Although classes have been in session for nearly eight months, for thousands of Fresno Unified students Tuesday was a lot like the first day of school.

Little girls at Eaton and Williams elementary schools had big pink bows in their hair and carried “Frozen”-themed backpacks. Boys had their shirts tucked in and their hair slicked down.

But unlike other first days, the students were all wearing face masks and making sure to take their place on pavement markers to maintain their distances.

Eaton principal Elizabeth Buettner was outside greeting students and parents by name and welcoming them back to the northeast Fresno elementary. 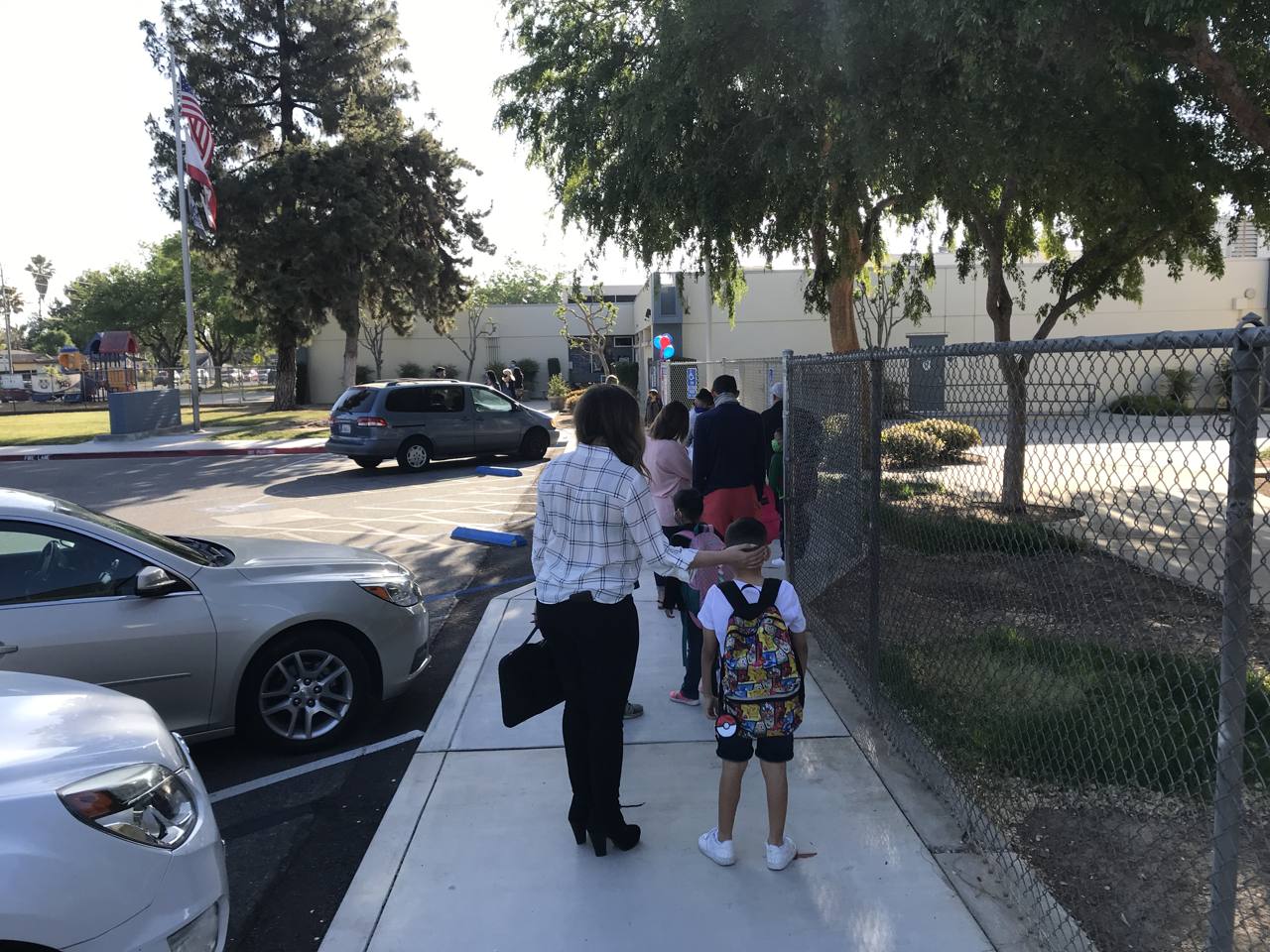 Steven Butz had brought his son Zachariah, 6, for his first-grade class and was accompanied by daughter Lexi Ann, a third grader, who was wearing tights and pink slippers.

“She’s coming back next week,” Butz told Buettner, who joked that she thought Lexi Ann “was a little casual for the first day.”

Tuesday’s reopening was highly anticipated, and not just for Zachariah, Butz told GV Wire℠. “I’ve been waiting for this day for a long time. It’s been a long time.”

Students in preschool through second grade and grades 7, 9, and 12 returned to school on Tuesday. Students in the remaining grades are due back starting April 13.

For the most part, students were excited finally to be back in classrooms with their teachers and schoolmates, although in smaller-sized classes — to maintain proper distancing, students who are returning to in-person instruction are assigned to group A or B and attend school on Tuesdays and Wednesdays or Thursdays and Fridays. All students are on distance learning on Mondays, and group C students are on distance learning the rest of the week as well.

As is typical for a “first” day of school, there were a few tears. One transitional kindergarten student at Williams Elementary in central Fresno was sad when his mother had to leave, principal Bonifacio Sanchez recalled, “but he quickly found a buddy from his classroom that he knew from online, and that did it.”

Williams teachers would provide a headcount later Tuesday, but Sanchez said he was expecting around 170 students to attend in-person class on Tuesday. 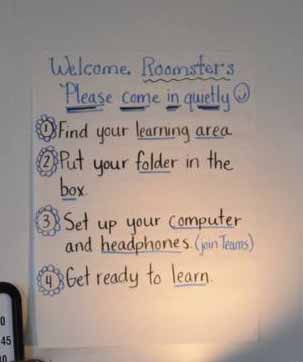 Students who are back in Monique Miller’s classroom are “roomsters,” and those online are “teamsters.” GV Wire/Nancy Price0

In Monique Miller’s second-grade classroom at Williams, students are divvied up as “teamsters” and “roomsters,” depending on whether the student is on Microsoft Teams or in the classroom that day.

She was expecting 12 students in group A on Tuesday and was surprised when a 13th arrived. Sadly, Miller said, she had to send the youngster home again — the girl is in group B, which starts in-person classes on Thursday.

Only three of her 25 students opted to remain on distance learning, said Miller.

Staying Online for Some Lessons

Her morning math lesson began with all students connecting through their laptops — even the ones in her second-floor classroom  — as they began working a subtraction problem on their whiteboards. Soon, she had divided the in-person students into two groups and she and the classroom aide moved to whiteboards at the front of the classroom while another aide worked with the online students.

The internet connection was a little glitchy, and sometimes the webcam pointed at Miller’s whiteboard didn’t broadcast the image, but all in all the first day back at school was going well, Miller said.

“The bottom line, it’s good to have the kids back,” she said.

Williams teachers were ready to hit the ground running with simultaneous teaching of “roomsters and teamsters” because several teachers had piloted the system and then trained their fellow teachers in the months leading up to Tuesday, Sanchez said.

Getting more students back into classrooms is an important milestone, not only to help teachers better communicate with students but also for students to learn the skills they will need that go beyond the academics, he said.

“The most exciting part of today for me is seeing the children learning in the classrooms, seeing them receive that in person, small group intervention. That is still possible through online,” he said. “But when you have a child in front of you, there’s more control that you can exercise when providing intervention for a child.”

In a pandemic world, some of that learning also is about how to remain safe, how to sit apart in the cafeteria at tables that are designated for each class, and how to “hug” yourself while moving from cafeteria to class so as not to inadvertently touch another student or a surface.

As with most of the other adjustments kids have had to make during the pandemic, the Williams kindergartners seemed to be taking it in stride. 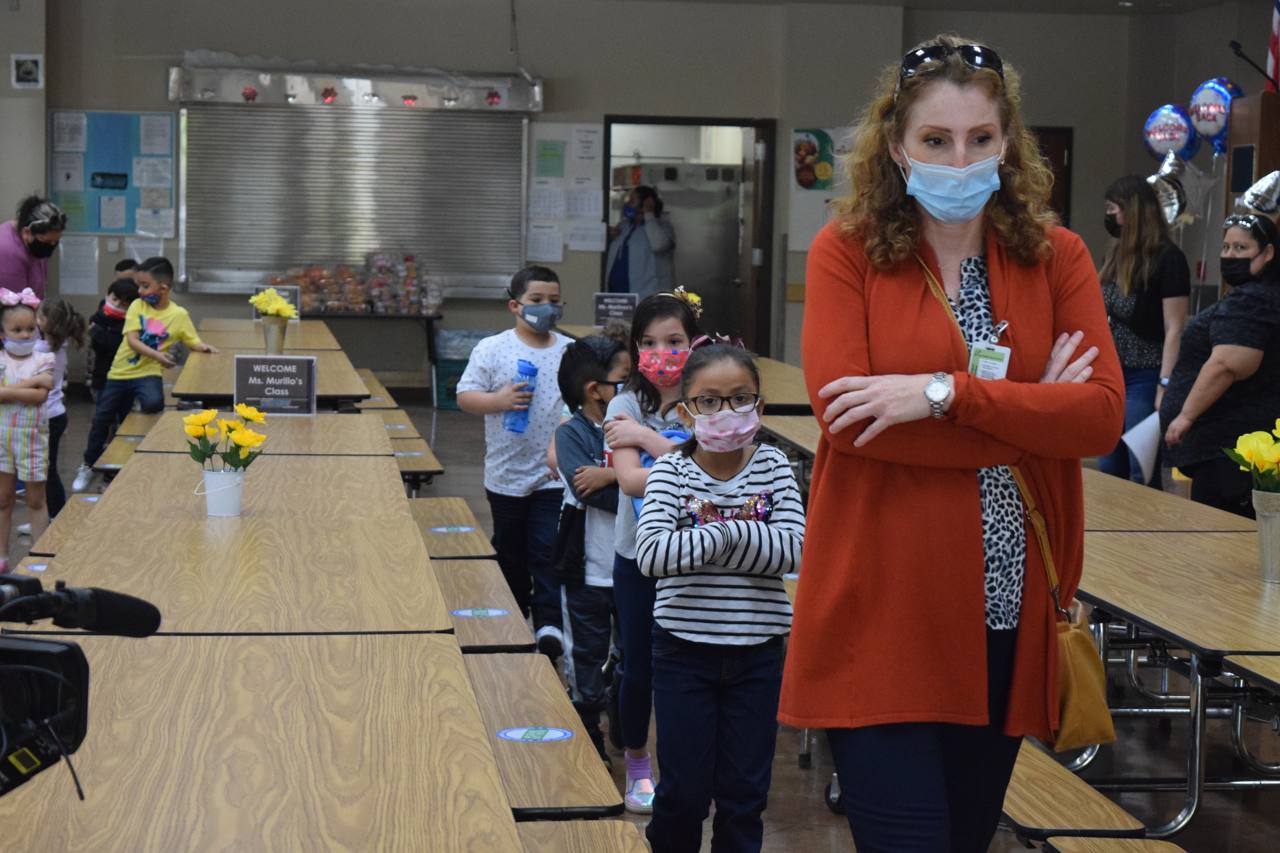