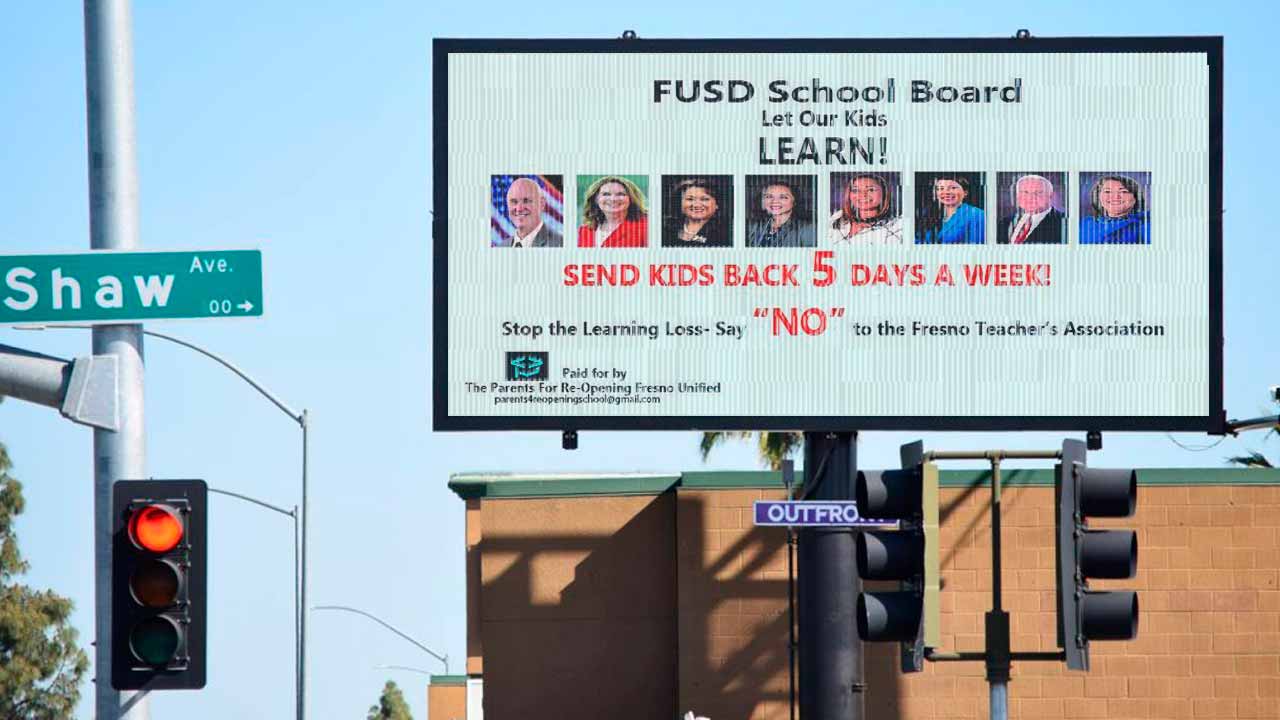 Two billboards in northwest Fresno are urging the Fresno Unified School Board and Fresno Teachers Association to reopen schools to students for five days a week instead of the current plan of two days of in-person learning and three days of distance learning.

The changeable message signs at the northeast corner of Shaw and Blackstone avenues were paid for by the Parents for Re-Opening Fresno Unified Facebook group, which has been turning up the heat on trustees and teachers to get kids back into classroom.

The teachers union is targeted in both billboard messages, one of which is directly aimed at the FTA and the other that urges the School Board to “Stop the Learning Loss. Say ‘NO’ to the Fresno Teacher’s Association.”

Superintendent Bob Nelson and the seven Fresno Unified trustees are featured on this billboard. (Image: Parents for Re-Opening Fresno Unified)

The teachers union is being targeted on the billboards because it appears to be calling the shots for Superintendent Bob Nelson and the trustees, said Priscilla Cullers, whose daughters are in the first and fourth grade at Forkner Elementary.

Teachers unions pushed for schools to be closed until teachers could be vaccinated, so the state made that a priority in March, Cullers said. But the schools are only opening on a limited basis, she said.

Teachers union president Manuel Bonilla did not immediately respond to a request for comment Thursday.

Parents are frustrated when they see students at surrounding school districts and private schools already back in classes, and they compare that against Fresno Unified’s apparently gradual ramp-up, Cullers said.

She said her younger daughter’s kindergarten year was marked by the school closures in March to slow the spread of the coronavirus, and she has been on distance learning ever since. By now, Cullers said, her daughter and many other youngsters will need to relearn how to raise their hand, stay in their seats, and not have snacks at will during the school day.

After the Centers for Disease Control and Prevention revised its recommendation for student separation from 6 feet to 3 feet, it opened the door for more students to be back in school for more days, Cullers said.

According to a news release for the parents group, the billboards will cost $1,025 to run for one week and are being financed through GoFundMe donations.

Heading Back to School

Fresno Unified students will begin returning to in-person instruction on Tuesday, starting with the youngest students and adding additional grade levels in subsequent days. According to a parent survey, about 60% of students will be returning to classrooms, with the remainder remaining with distance learning.

The district is giving teachers an extra day of pay to prepare their classrooms for in-person instruction. Teachers will be doing simultaneous instruction of students who are in the classroom and those who remain on distance learning.

Nelson noted in a Facebook post that Thursday marked the one-year anniversary of the School Board’s decision to keep schools closed through the end of the 2019-20 school year because of the pandemic.

“Little did we know at that time that we were embarking on what has definitely proven the most complicated and difficult period in my nearly 30 years serving as a Valley educator,” Nelson wrote. “All of us locally, nationally, and even across the globe have made decisions as to next steps: some hasty, some wise, but all of which were wildly unpopular with somebody in our local context.”

A year ago, today, we made the decision to close our schools for the remainder of the 2019-2020 school year. Little did…

Board President Valerie Davis said trustees are having to balance pressure from parents who want to open schools more quickly with pressure from parents who think the district is moving too fast, all while considering the potential risk to staffers. Even though schools staffers got priority registration for vaccinations, some may be unable to take the shots because of their personal health conditions, she said.

The district’s safety measures of sanitizing classes and buses and requiring face masks also includes random testing each month of 12% of schools’ workforce, a cost that Fresno Unified is working with health providers to lower, Davis said.

The plan for now will continue to be two days in school and three on virtual learning for students, she said. More school hours and days will be added “when we can, as safely as we can, as soon as we can.”

Here’s the Latest on the Gavin Newsom Recall Effort