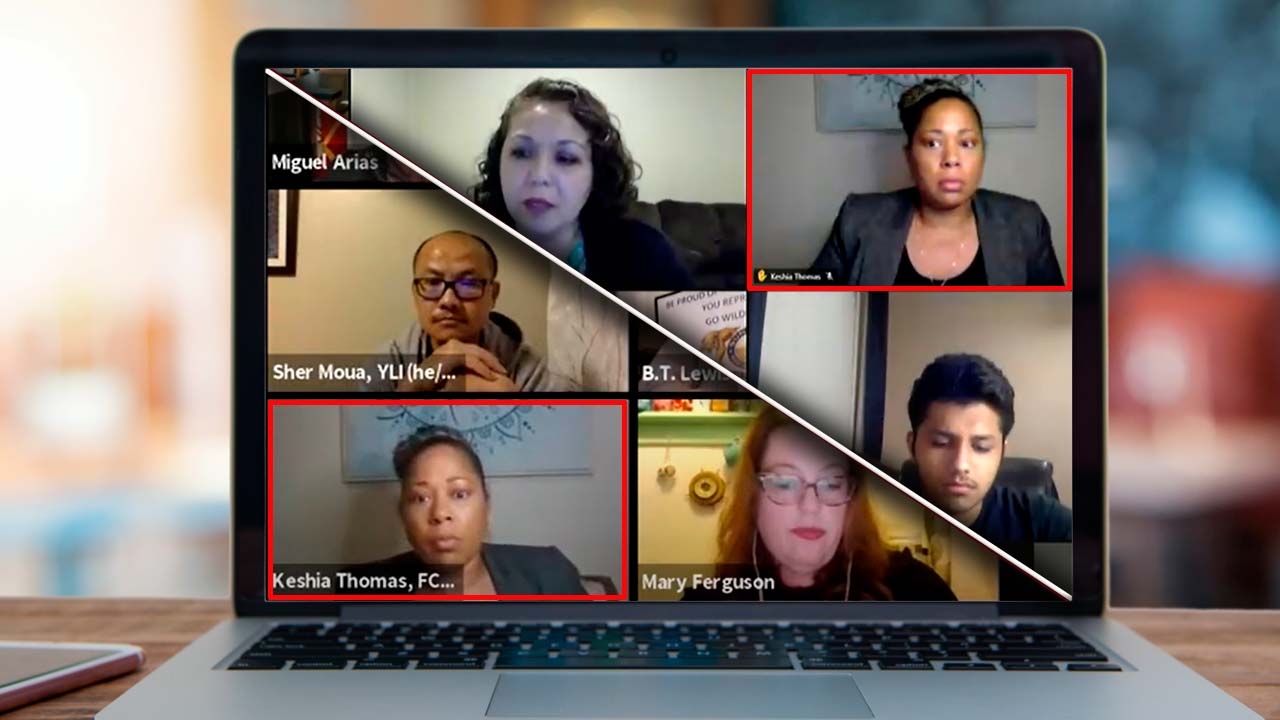 Fresno Unified Trustee Keshia Thomas displayed her multitasking skills last Wednesday when she appeared at both the School Board meeting and an overlapping meeting of the economic development organization Transform Fresno.

Both were held virtually. Thomas, who is clerk of the School Board, was introduced at the Transform Fresno meeting as the new community engagement consultant with the Clean Shared Mobility Network project team that’s being led by the Fresno Metro Black Chamber Foundation.

Transform Fresno is a project that’s funded by the city’s Transformative Climate Communities Program and is intended to improve the economies and environments of downtown Fresno, Chinatown, and southwest Fresno through investments.

How could she be in two places at once? The credit goes in part to Zoom and Microsoft Teams.

While the rest of the trustees were offering their congratulations to Misty Her, whose promotion to deputy superintendent was approved Wednesday, Thomas was on mute for the School Board meeting and appeared to be having a separate conversation, and shortly after turned off her School Board webcam. She offered her congratulations to Her later in the meeting.

Board president Valerie Davis told School Zone on Monday that she was unaware that Thomas had left the School Board meeting to speak at another meeting. Trustees typically give her a heads-up if they have to step away for a break or a beverage, or for some other reason, she said.

As for leaving the School Board meeting for another meeting, Davis said that work life sometimes interferes with School Board duties. “Some of us have to do what we need to do for work,” she said.

Thomas did not respond to an interview request from School Zone on Monday.

Update: On Tuesday, Thomas said she had notified the board’s chief of staff that she would need to join another meeting during the School Board meeting. “I didn’t do anything wrong,” she said. “It’s very rare that I would have to leave, but I have to work. I have a son to raise, a mortgage to pay, PG&E.”

Also at Wednesday’s board meeting, Fresno Unified Trustee Veva Islas responded to Thomas’ angry chastisement of her fellow board members last month over how the School Board handled her son-in-law’s charter school application at the Jan. 13 meeting.

During her eight-minute tirade, Thomas had specifically called out Islas and Trustee Carol Mills. But at the end, only Davis had a response, and that was to note mildly that the Golden Charter Academy application ultimately had been approved by the board.

Islas held out an olive branch of sorts last Wednesday.

“I just want to say that we had a difficult meeting, our last meeting, and that we will have differences as a board and that I hope that we maintain civility in those differences. I hope that we maintain respect and the ability to continue to work with each other. I have an open door. If anybody has any issues with me, with the decisions, with the comments, the questions that I make, you’re welcome to contact me directly. And I’m more than happy to have a civil conversation with you.

“And I hope we can learn from that experience and really move forward. We do have board members who are going through things. And we want to appreciate that we’re all human. We all have flaws. We all make mistakes.  And we need to be big enough to apologize when we do and to extend each other, that leaf and that hand of civility and friendship and partnership. We need to do more than just saying that we’re willing to do that. We need to be role models for our students and our staff as well. So with that, I just want to thank you, President Thomas, for your — I’m sorry, President Davis, for your time.”