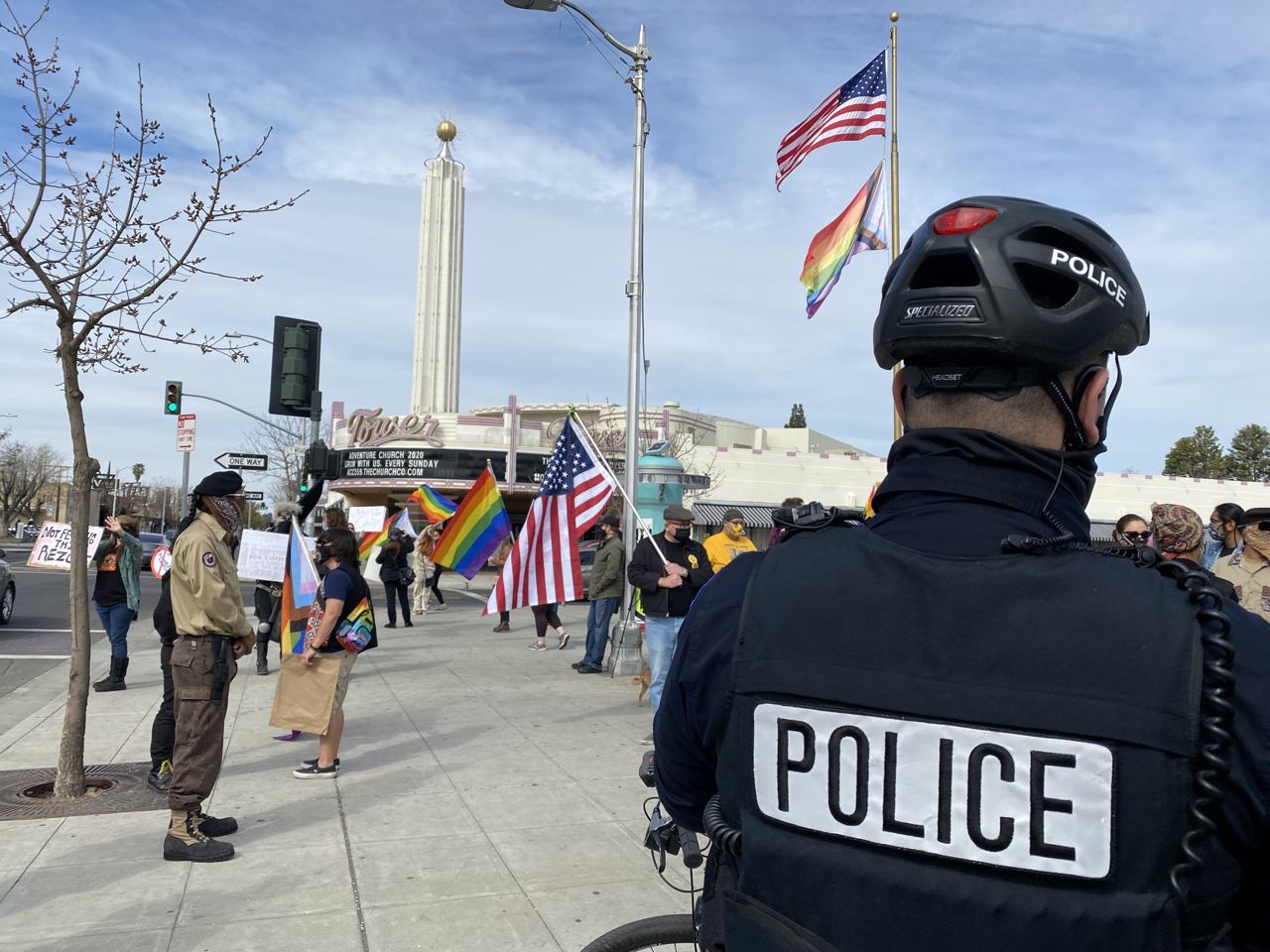 Tensions mounted Sunday at the recurring weekly protest at the Tower Theatre over the sale of the iconic Fresno venue.

Police stepped in to warn opposing sides to simmer things down.

Contrasting the music, colorful signs and dancing were opposing groups of agitators. Confrontations erupted, with face-offs escalating to exchanges of harsh words before police intervened.

The protests, now in their third month, have been largely peaceful. Supporters of the theater are opposed to Adventure Church’s purchase of the building and its use for religious services.

At one point, Fresno police Sgt. John Romo warned the Brown Beret group against blocking the sidewalks. Romo also had direct conversations with a Brown Beret member, and a man in Proud Boys sweatshirt who called himself “Bam Bam.”

Approximately 10 police officers were stationed at four different locations around the protests.

Some Tower protesters also engaged with right wing activists Josh Fulfer and Jason Phillips. The duo, who call themselves “Oreo Express,” have livestreamed the protests for the past several weeks on their social media accounts.

The pair engaged in verbal taunting with Tower supporters, with insults thown back and forth at the level heard at an elementary school yard.

The Brown Berets and Proud Boys also engaged in a bilingual exhibit of profanity.

One physical altercation occurred when conservative activist Eddie Block and a man who identified himself has Jihad Subia got into it. Block — in a scooter — appeared to back onto Subia’s foot. Police did not intervene.

On Wednesday, attorneys representing Sequoia Brewing Company and the Tower Theatre will argue their cases in front of Judge Rosemary McGuire.

Last month, McGuire issued a temporary restraining order halting the sale of the property Sequoia Brewing Company leases, owned by the theater. She will decide whether to grant an injunction or let the sale move forward.

The issue is whether language in Sequoia Brewing Company’s lease is a right of first refusal or an “option.” The former means the brewery/restaurant would have a right to purchase its building before it could be sold to anyone else. The latter means they retain a right to negotiate its sale no matter who owns the property.

While the legal wrangling is specific to the leased portion of the building, in effect it applies to the entire sale proposal. That is how the Sequoia Brewing Company and Adventure Church attorneys are interpreting the ruling.

To separate the Sequoia Brewing Company property from the rest of the Tower proposed sale would require a series of steps, including engineering reports and city approval. While that can theoretically be accomplished, it would not be a quick process.

Court documents say the Tower Theater owners “at no time during the process desired to sell the Premises separate from the Property” until the sale of the Tower complex appeared near completion in mid-January. A new closing date has been set for March 31.

Lawrence Abbate, who manages the Tower Theatre properties, alleges that Sequoia Brewing Company is in default of its lease for failing to maintain certain areas. The amount is $2,678.

The theater is offering to sell the restaurant portion of the building to Sequoia Brewing Company for $1.268 million.

Whether or not an injunction is granted, a court hearing on the actual merits of the case is now scheduled for July. Heather Parish, a member of the demonstration committee, said the weekly protests are intended to keep the issue front and center.

“We’re here to keep this issue in the public mind, in the mind of our city council members, in the mind of the people who are involved with the sale of the church. We want them to know that every single week there’s still a community here that has concerns about the direction that this is going,” Parish said.

Tower District activists like Parish say if Adventure Church moves in, it could cause negative economic consequences for nearby bars and restaurants. They say the theater is not zoned for a church assembly.

Parrish said it didn’t make a difference if a church group held regularly assembly or another group. Demonstrators opposed to the sale of the Tower Theatre at Sunday’s protest. (GV Wire/David Taub)

Protests in “No Trespassing” Zone

For the last several weeks. the protesters have staged ta a parking lot across Wishon Avenue from the theater. They have placed barricades along the perimeter, with “No Trespassing” signs.

An organizer with the Tower District Demonstration Committee said a group was leasing the space from Amendola Investments, without providing specifics.

Calls to Amendola Investments were not returned. 2 Charged in Assault of Capitol Officer Who Died After Riot

Nearby Counties Set to Move Into Red Tier. What About Fresno?