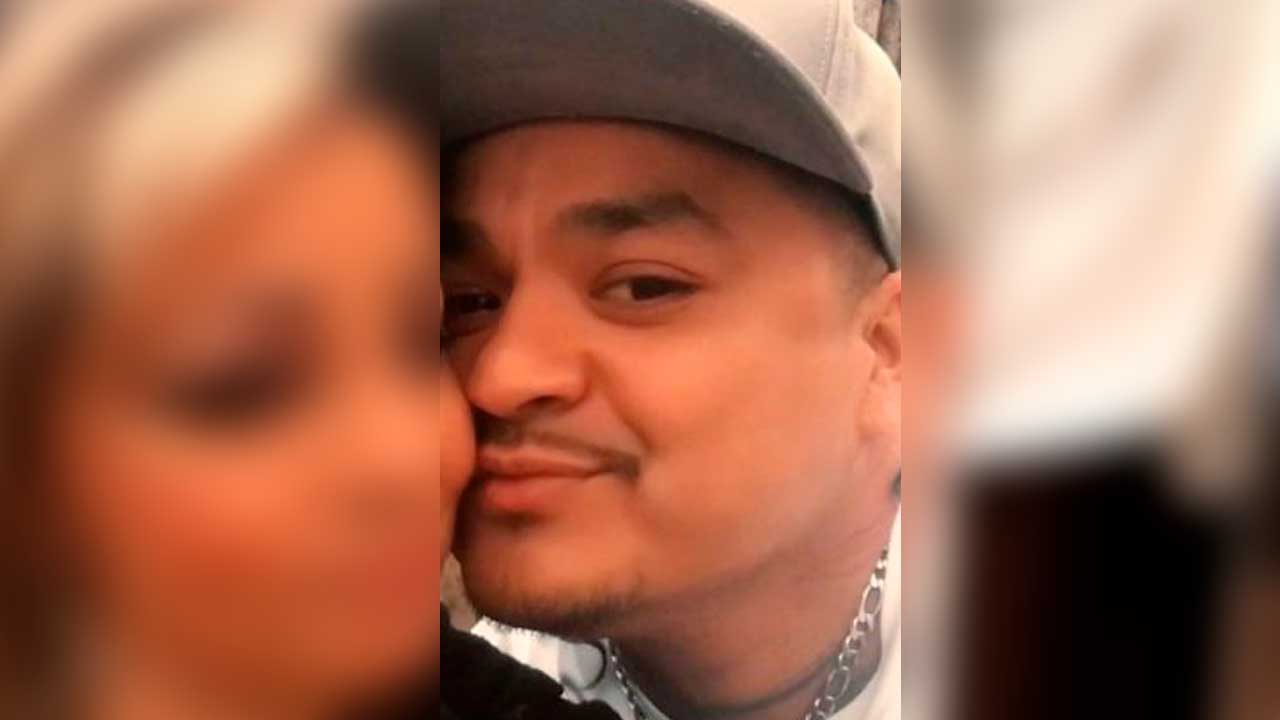 In response to a request by attorneys for the family of Joseph Perez, the Fresno Police Department released edited bodycam video Friday showing the moments on May 10, 2017 when Perez was restrained by officers.

Attorneys for the family later released their own unedited version. At one point in the video Perez can be heard saying, “I can’t breathe.”

Both versions of the video show Perez at various points struggling to breathe while being restrained on the ground by police. Peres became unresponsive and later died at the hospital.

At one point in the video, an officer can be seen sitting on top of a backboard that had been placed on top of Peres when officers were trying to restrain him.

Walking in a Roadway

According to a Fresno Police Department press release, officers passing by saw Mr. Perez walking in a busy roadway at Palm and Santa Fe. The department said he showed signs of distress and was putting his own safety and the safety of others at risk. At the same time, residents in the area were calling 911 about Perez.

The release further states that Fresno officers got Perez to sit on the sidewalk, however because he kept trying to go back out into the roadway, they handcuffed him and called for an ambulance. Police say Perez was agitated and struggled with officers and with the Fresno County Sheriff’s deputies who arrived a short time later.

“Mr. Perez, was not committing any crime. He was not wanted for the commission of any crime,” said the family’s attorney, John Taylor, at a Friday news conference.

Taylor says it was a failure on the part of the 10 officers and EMS officials on scene that weren’t trained to be able to adequately deal with somebody who’s not committing a crime. 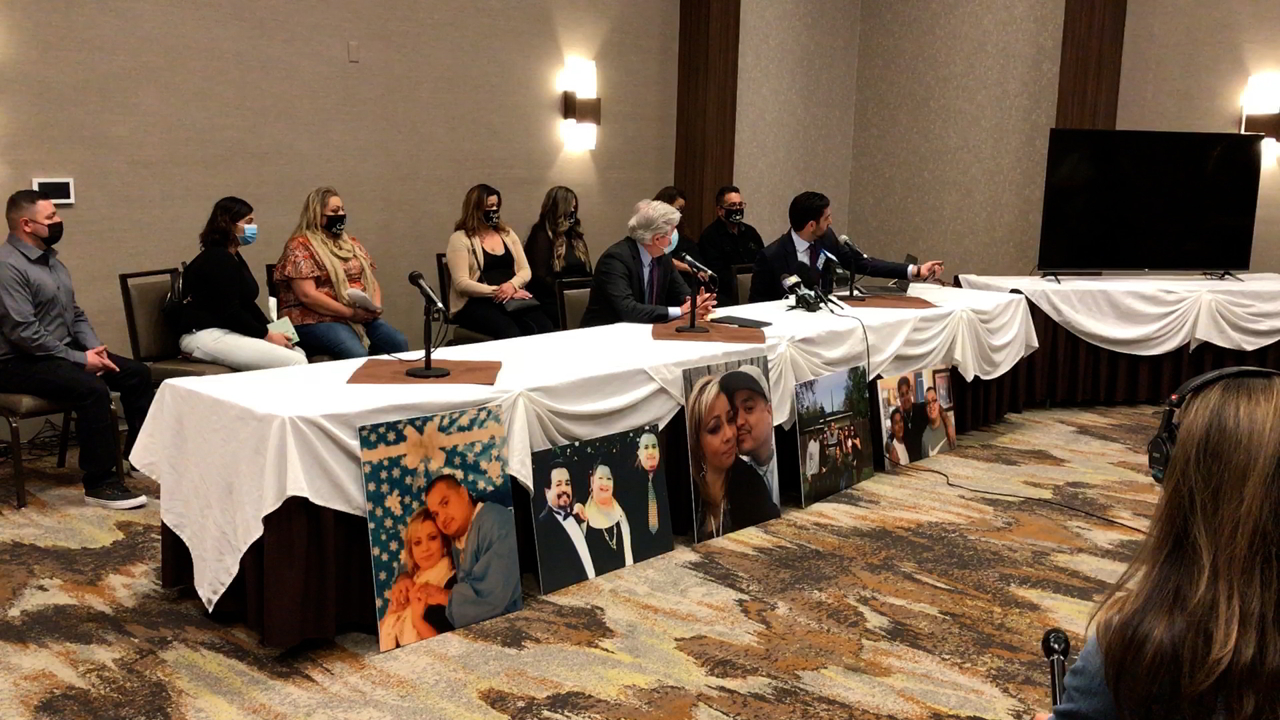 Cause of Death Not in Dispute

Neil Gehlawat, another attorney for the family said the cause of death is undisputed. “The coroner from the county of Fresno in this case, decided that Mr. Perez’s death was a homicide,” said Gehlawat. He defined a homicide as a killing of one person by other people, or another person.

Sitting behind the attorneys were several of Joseph Perez’ family members including his widow Terralee Perez.

Police say  the coroner determined the cause of death to be compressional asphyxia with a contributing factor of a toxic amount of methamphetamine in his system at 24 times the toxic level.

Gehlawat says the cause of his death was from compression asphyxia, meaning his body was placed in such a way and pressure was being applied to it that caused him to  stop breathing and ultimately die. “All of which is captured on this (bodycam) footage,” said Gehlawat.

Gehlawat says the presence of methamphetamine in his system was inconsequential because the coroner’s report said that was not the cause of his death. The attorney acknowledged the presence of the drug in Perez’ system, but said it was not what ultimately killed Perez.

“The only other people who are responsible for killing Mr. Perez are the officers the deputies and the folks from the paramedics that were there on scene,” said Gehlawat. 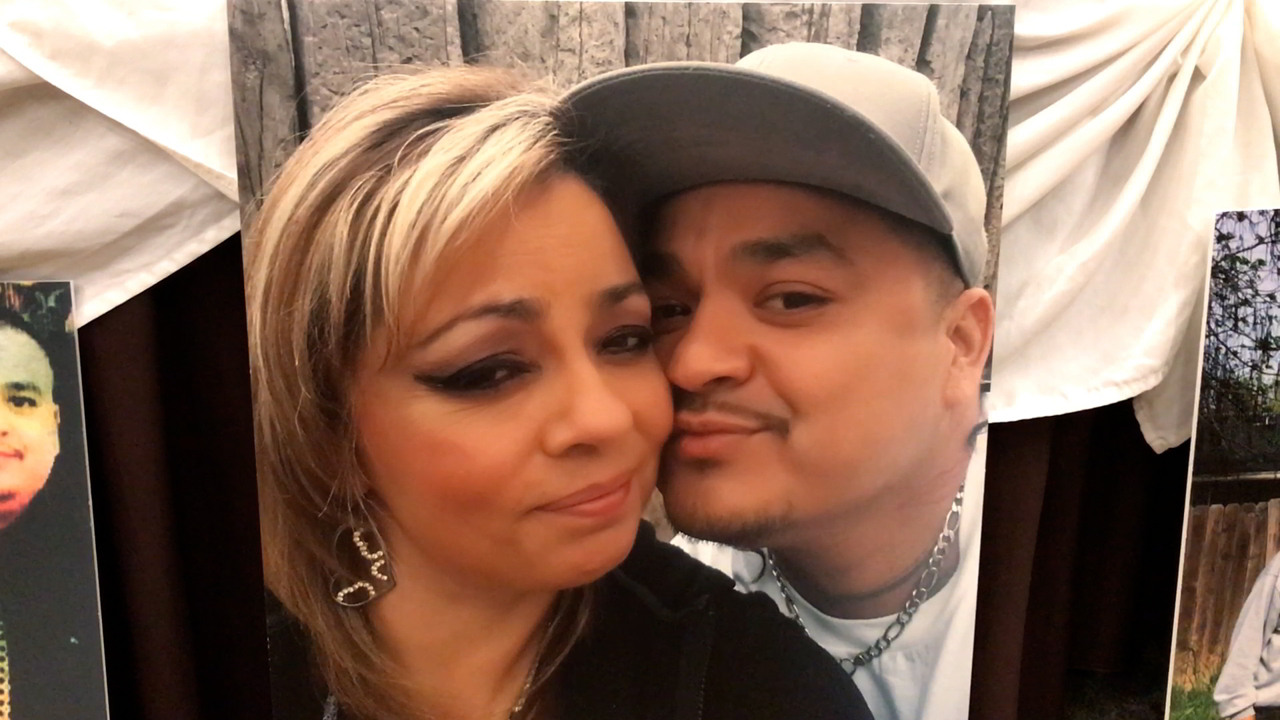 However, his attorneys say the video released Friday shows Perez’ body and hands go limp before he’s put into a waiting ambulance.

“He’s unconscious at that point. But instead of rolling him over, they continue to tie his hands to this backboard and then turned him over,” said Gehlawat. 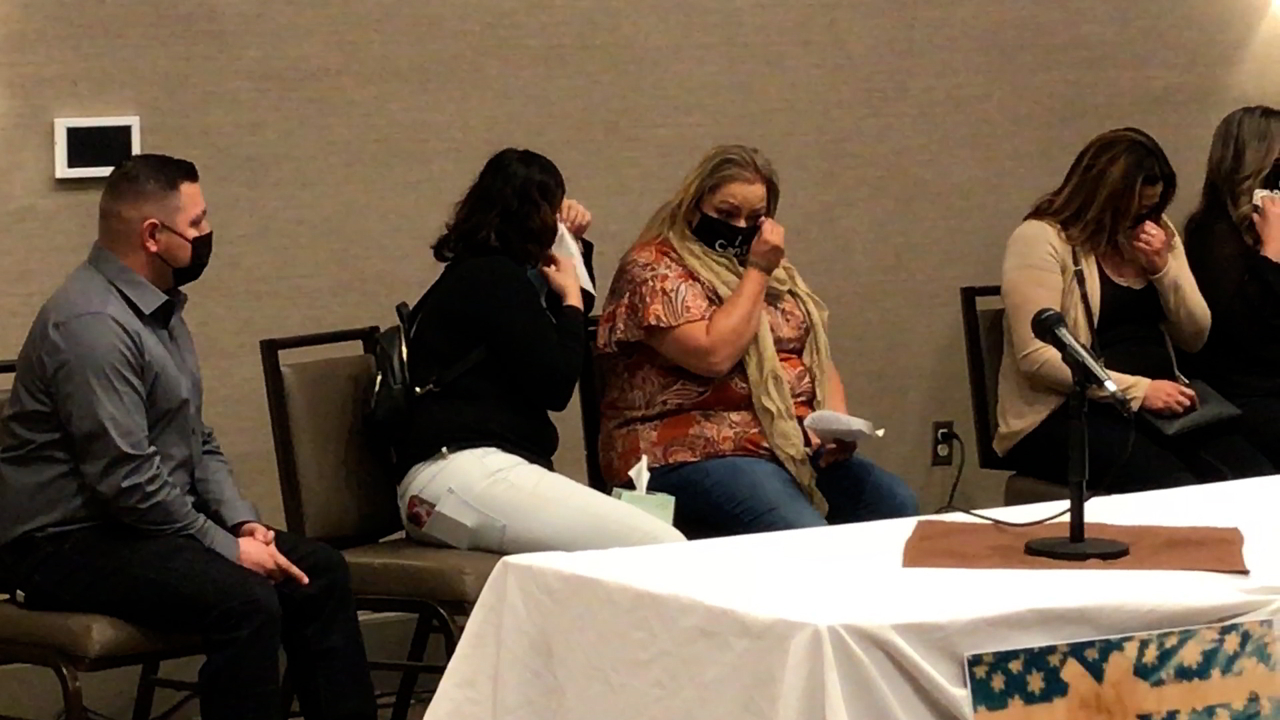 “This will stay with me for the rest of my life,” she said. “There needs to be change. I know it’ll never bring Joseph back, but they need to change the way they do things.”

Josesph’s sister Michelle says the 16 minutes of bodycam video she watched was indescribable and unforgettable.

“Why didn’t anyone help him?,” she asked rhetorically. “When they finally flipped him over they clearly saw that he was unresponsive.”

Michelle believes the officers should face discipline for their actions. 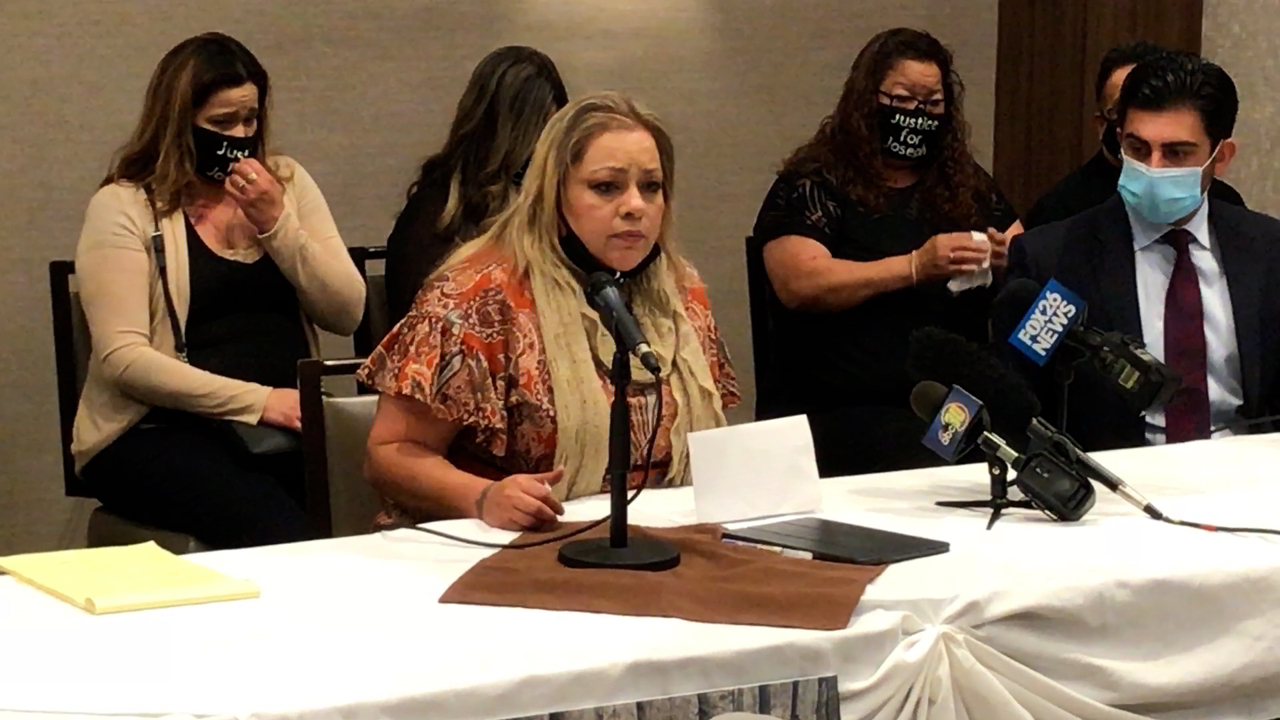 In the Fresno Police Department video released Friday, former Chief Andy Hall starts off with a video statement where he delivers a message to the family.

“I want to express, on the part of the Fresno Police Department, how tragic this loss of life was,” said Hall.

Current Chief Paco Balderrama in a statement says he, “Extends his heartfelt sympathies to the family of Joseph Perez on behalf of the Fresno Police Department.”

The Perez family’s attorney was critical of the police leaders’ comments.

“Those are hollow condolences,” said Gehlawat. “They mean nothing. Because in the same breath. They defend the conduct of their officers and their deputies in what can only be described as something that’s indefensible.” 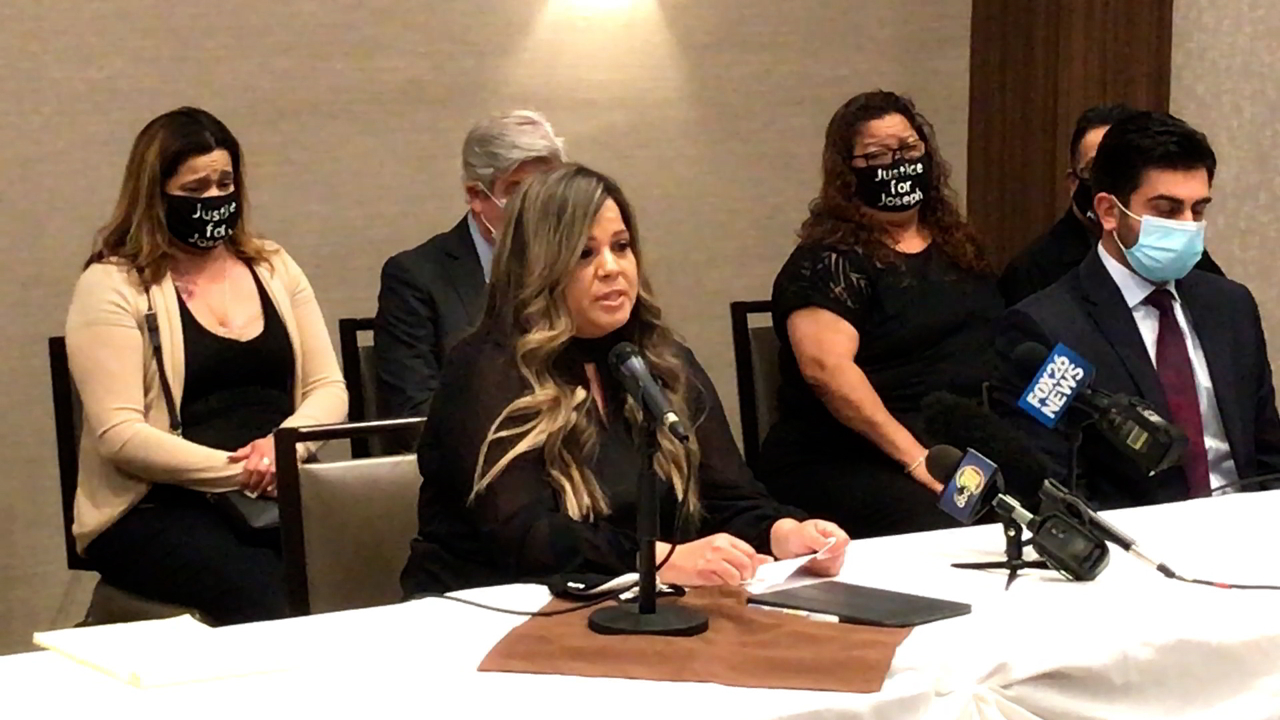 Next Steps in the Case

A civil trial is set for the case and is scheduled for May 2022.

Gehlawat says it’s unclear at this time if former police chief, now Mayor Jerry Dyer, will be called to testify.

“He may or may not be a witness. So we’ll just kind of have to see how it plays out in the coming months,” said Gehlawat.

Court documents list the city and county of Fresno as defendants as well as people involved in the incident.