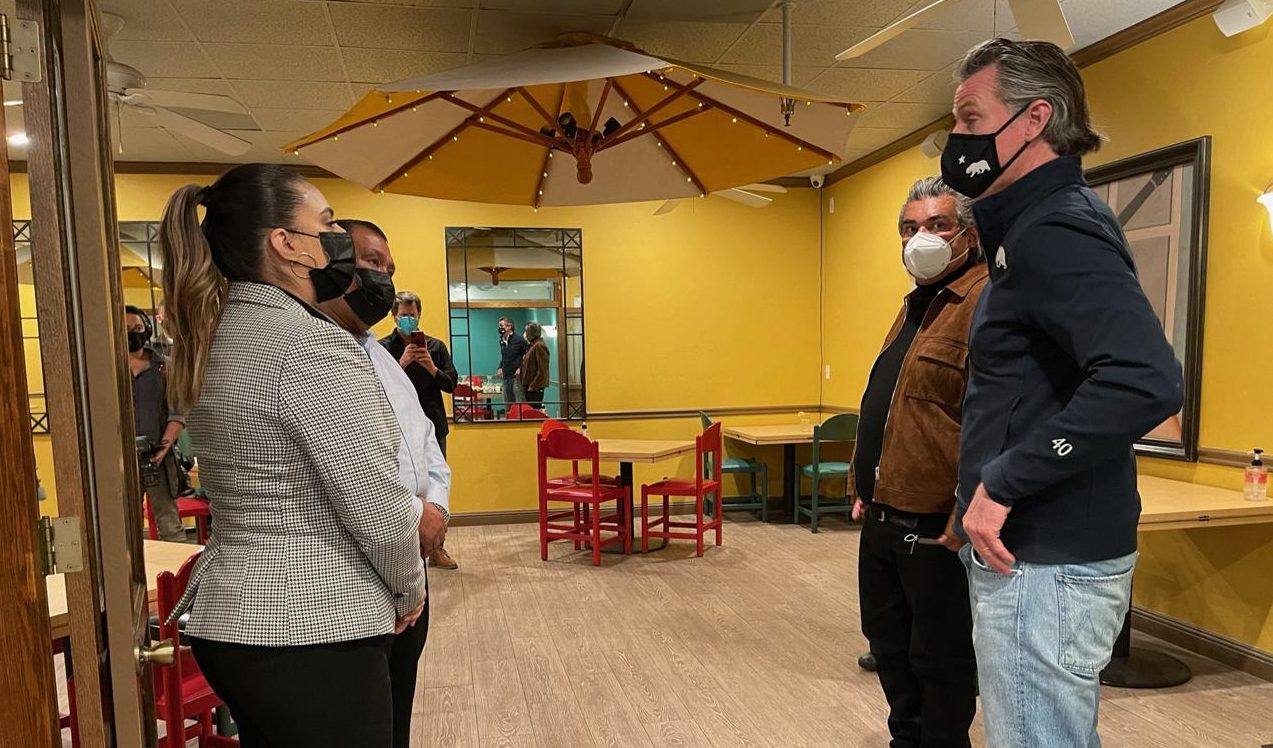 After holding a news conference in central Fresno on Friday to discuss the state’s vaccination efforts, Gov. Gavin Newsom stopped by Los Amigos Mexican Restaurant on Blackstone and Shaw avenues. After pictures of the visit were posted on social media, several accused Newsom of dining indoors, an allegation his office denies.

“He showed up at a restaurant and he never ate there. We just haved a talk with him,” Los Amigos owner Ricardo Flores said.

Newsom visited Los Amigos to met with a business that received a state grant.

“The governor stopped by this small business to highlight that the owner received a California Relief Grant. An additional $2 billion in state funding for small businesses was made available to provide grants of up to $25,000 to help entrepreneurs hurt by this pandemic. The governor did not dine in this restaurant,” Newsom press secretary Daniel Lopez said.

The post included two pictures. One featured entertainer George Lopez, who accompanied Newsom to both the news conference and Los Amigos. The image shows a mirror reflecting what appears to be a set table in the background, behind the two men.

Flores said staff set up a table to provide water and ice.

“We even offered a bottled water and he (Newsom) didn’t want to take it,” Flores said.

Indoor dining is not allowed under state and local emergency orders because of the pandemic. Newsom faced heavy criticism for eating at the fancy French Laundry restaurant in Napa in November. He apologized for violating his own standards.

The French Laundry mishap energized an ongoing effort. Organizers say they are on the verge of having the amount of necessary signatures to qualify the recall on the ballot.

After his #Fresno news conference, Gov. Gavin Newsom visited Los Amigos Mexican Restaurant on Blackstone & Shaw to meet with the owners, who received state grants. He did not dine there, per his spokesman. https://t.co/p2pjUsxNXD

Kevin Faulconer, the Republican former mayor of San Diego running for governor either in recall election or in 2022, pounced in a news release.

“Apparently incompetent elitist Gavin Newsom is still failing to live by the COVID-19 restrictions his administration has put in place,” Faulconer said, referring to a Tik Tok video. “He did this even though Fresno is in a purple tier county where indoor dining is banned. This comes after his infamous French Laundry debacle. Apparently, Newsom didn’t learn his lesson from the backlash he received after his hypocrisy was exposed.”

“It’s a pattern. Different rules, exception, and hypocrisy by the political elites. There’s no reason indoor dining should not be open statewide,” Cox wrote on Twitter.

A video, shot live and posted on the Facebook page of  conservative Fresno activists “The Oreo Express,” shows Newsom entering the restaurant and his entourage leaving approximately 41 minutes later.

Celebrity chef Andrew Gruel, a critic of Newsom, also jumped on the governor on social media.

“California is the only state where indoor dining is banned. Industry gutted. It’s an explosive topic. Newsom holds an event INSIDE a restaurant, posts video, and group is “dining/drinking” (see pic) – people are actually saying this is OK? If it’s ok for them then open it all up,” Gruel wrote.

California is the only state where indoor dining is banned. Industry gutted. It’s an explosive topic. Newsom holds an event INSIDE a restaurant, posts video, and group is “dining/drinking” (see pic) – people are actually saying this is OK? If it’s ok for them then open it all up. pic.twitter.com/fRVTdlxVWv

Los Amigos posted on its Facebook page that Lopez “tried our food in our outdoor patio after an anterview [sic] and he loved it!.” The text accompanied a 14 second video of Lopez endorsing the restaurant.

Lopez stuck around to eat in the outdoor patio after the governor left.