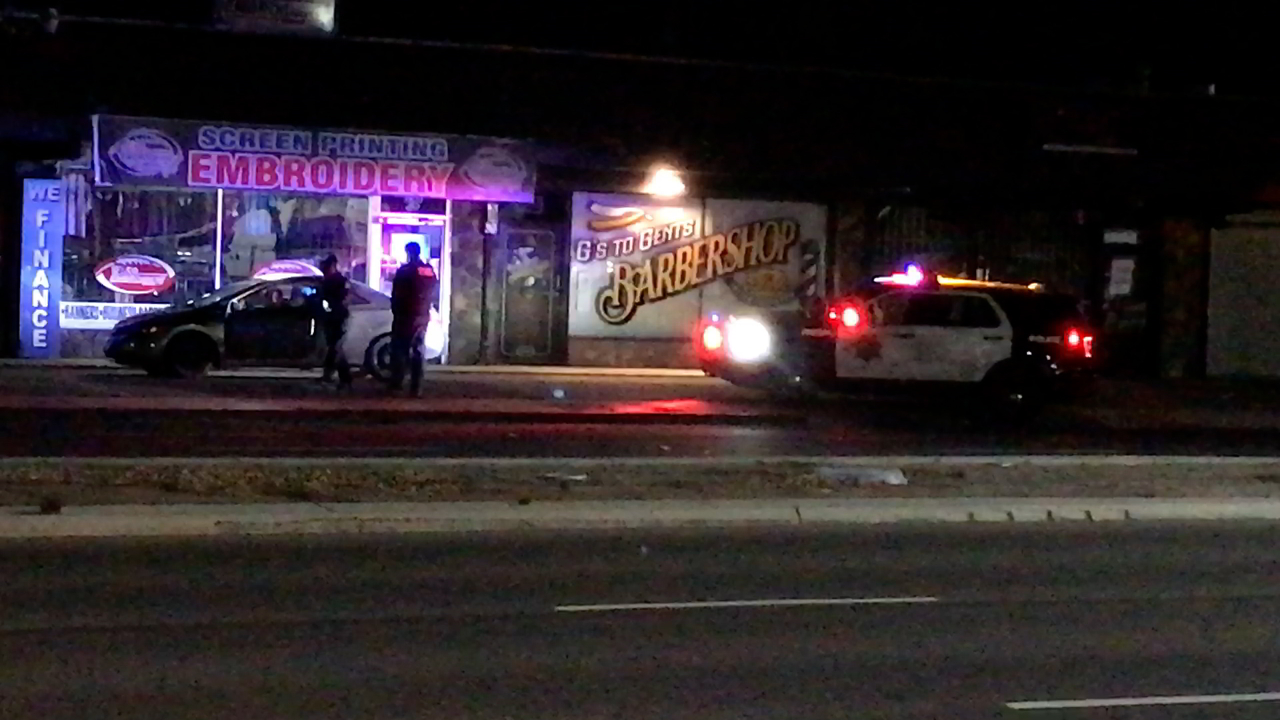 If you drove down Blackstone Avenue on Saturday night you may have seen more flashing police lights than street lights.

Law enforcement officers swarmed the area looking to crack down on illegal street racing, drunk driving, speeding, and any other number of traffic violations. Authorities say about 85 officers took part in the effort.

“This is just the tip of the iceberg,” said Fresno PD Deputy Chief Mike Reid before the operation began. “We’re here to honestly kind of take back the streets.” 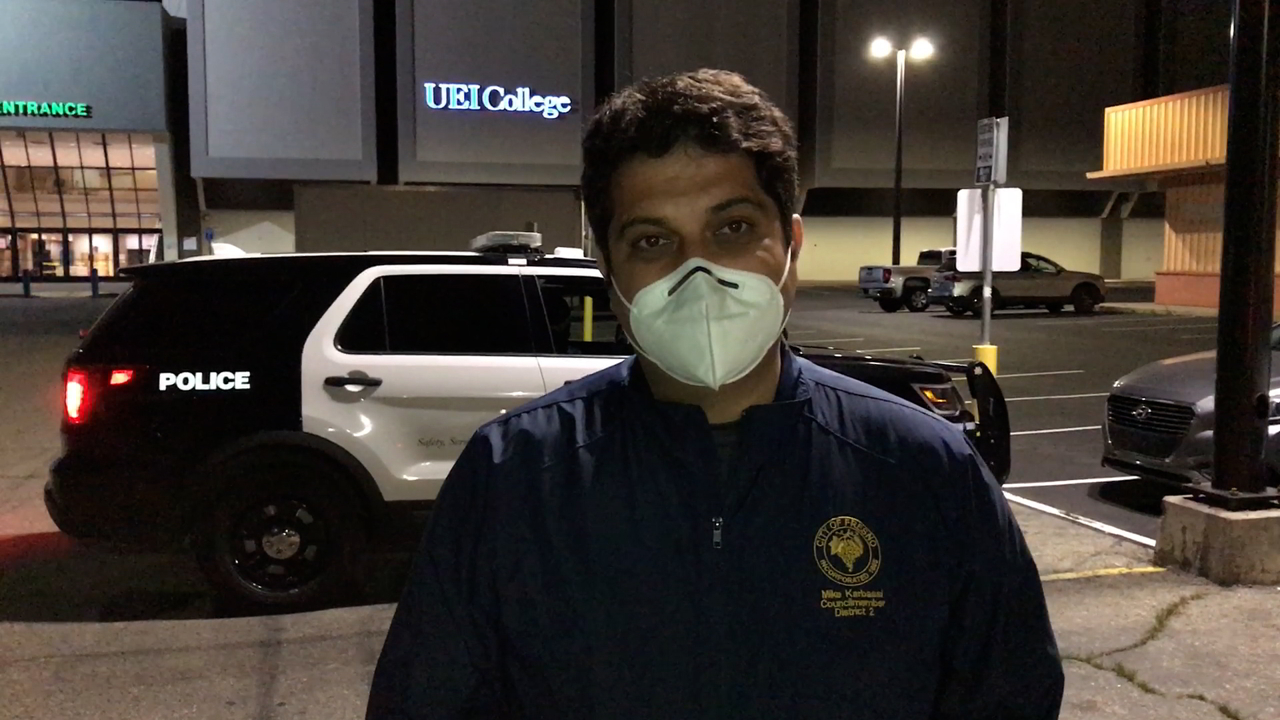 “If you want to race, don’t do it here.”–Fresno City Councilmember Mike Karbassi

GV Wire℠ was there as Fresno police, joined by the California Highway Patrol, Fresno County Sheriff’s Office, and the California Bureau of Automotive Repair, began the offensive at around 8 p.m.

“It‘s very important to us that we’re able to put together an operation like this with other partners in law enforcement,” said police Lt. Rob Beckwith.

By the end of the five hour long operation, Beckwith says officers had written a total of 189 citations. In addition, police impounded 44 vehicles, seized two guns and arrested ten people on DUI charges. 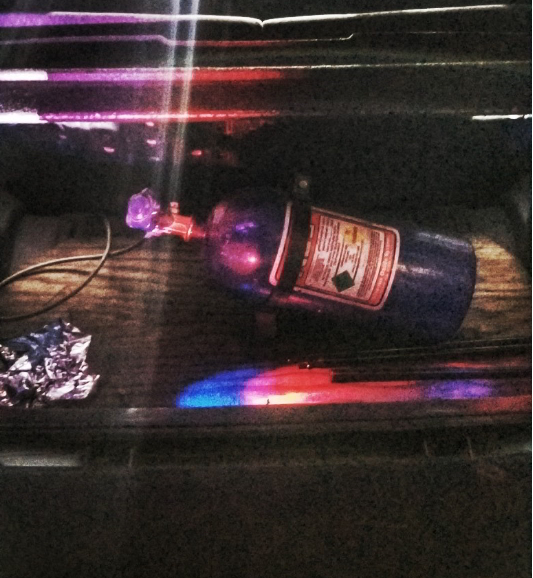 Police say a nitrous oxide bottle is considered an illegal vehicle modification. This one was found during Saturday’s enforcement operation. (Fresno PD photo)

Along Blackstone, officers could be seen pulling people over every few blocks, writing tickets, and impounding cars. Officers were spread all over the county targeting major corridors like Highway 41, Herndon Avenue, and Shaw Avenue.

In addition to the officers on the ground, a CHP plane and Fresno PD’s helicopter were overhead. Reid says the aircraft gave his team the ability to avoid getting into high speed pursuits. “We do have aircraft that can follow those to a location and then we can safely take them into custody,” said Reid. He added that officers also have drones at their disposal. 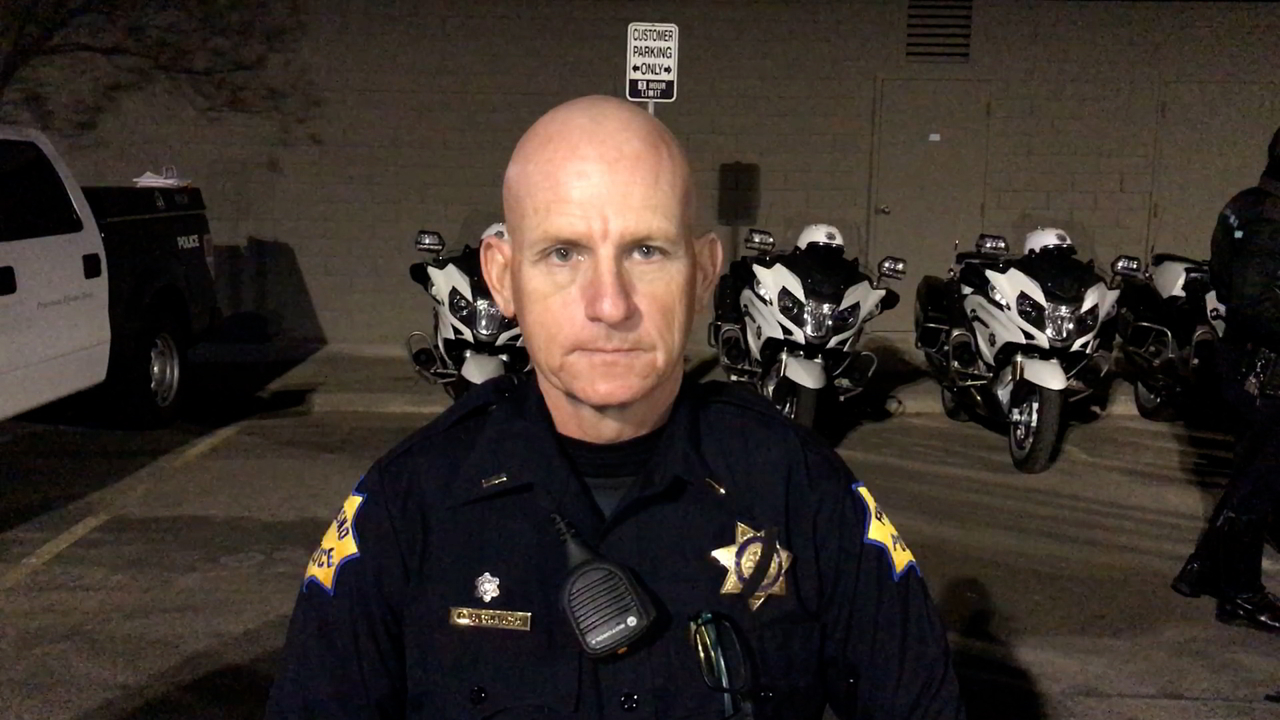 “It‘s very important to us that we’re able to to put together an operation like this with other partners in law enforcement.”–Fresno PD Lt. Rob Beckwith

“We really need to make our presence known,” says Fresno City Councilmember Mike Karbassi. A deadly traffic collision in Karbassi’s council district that police say resulted from street racing contributed to the urgency of the effort.

The crash claimed four lives at Palm and Bullard on December 26.

“If you want to race, don’t do it here,” Karbassi said.

He has been in regular contact with the mother of  one of the victims, who has been petitioning for something to be done after what happened to her family.

“I don’t think they were expecting this quickly for there to be action by the city. But it’s the right thing to do,” said Karbassi. Around 85 officers joined in an pre-operational briefing ahead of a major street racing crackdown in the city and county of Fresno on Saturday night. (GV Wire/Jim Jakobs) 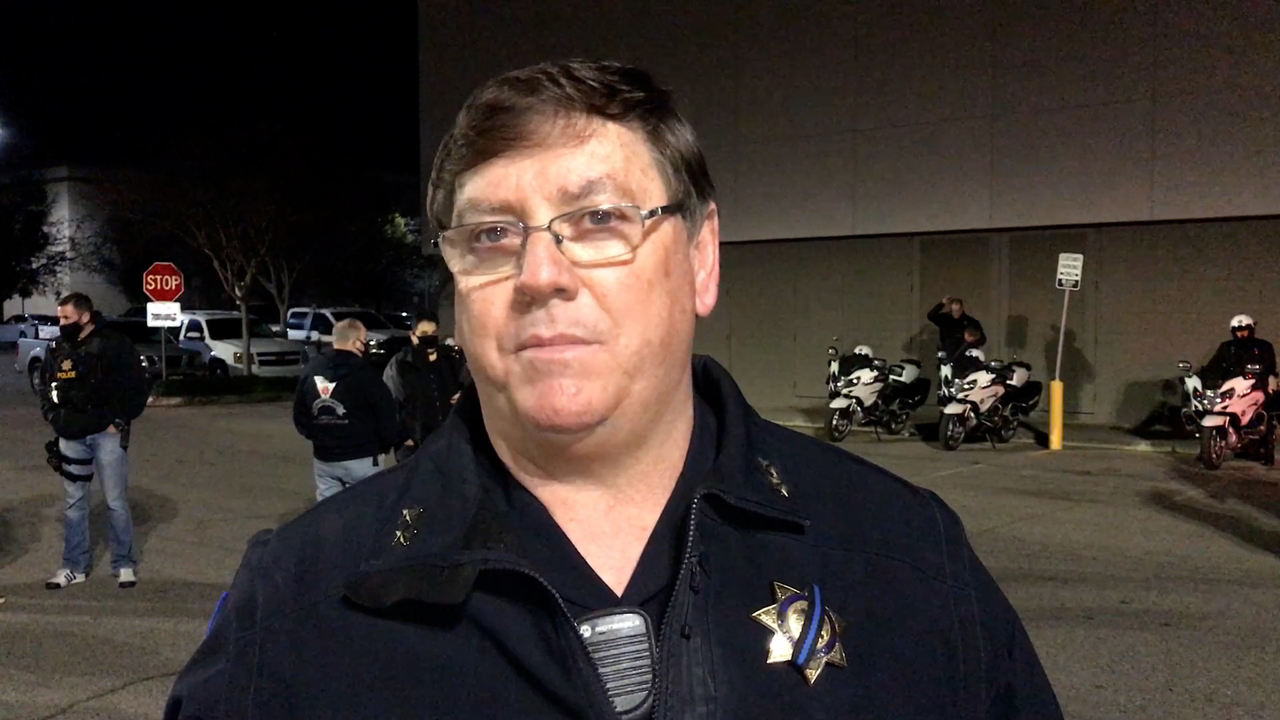 “This is just the tip of the iceberg. We’re here to honestly kind of take back the streets.”–Fresno PD Deputy Chief Mike Reid

Sanger High School senior Allison Chang, 17, and her cousins, Linda Chang, 21, and Christopher Vang, 27, were all killed after a speeding car ran a red light. Police say  the driver of the car, who also died, had been involved in racing on Blackstone just a few minutes before and had fled when officers approached.

Karbassi said Allison’s story had a strong impact on him.

“She was a pretty remarkable 17-year-old. Great student. Editor in chief of the school paper, ‘Sanger Highlights’,” said Karbassi. “She was a swimmer. She liked Crocs (shoes), which again shows you her personality. In fact, a lot of her friends wore crocs at the funeral in her honor.”

Allison’s mother, Dana Xiong is a teacher in the Fresno Unified School District. She is so thankful to law enforcement for an immediate response and collaboration to combat street racing issues that have plagued city streets. She’s hopeful that efforts like the one Saturday night will continue.

“Our wish is the lives of Allie, Linda, and Christopher be honored by the possibility that other lives may be saved,” Xiong says in a statement to GV Wire℠. “No family should ever have to endure the amount of pain and grief that we now carry.”

Karbassi says it was a tragedy that should have never happened.

“Even for the driver’s family, they lost a child,” said Karbassi. “He made a very bad decision. But everybody loses with this.” Allison Chang, 17, is at the top of this GofundMe account photo. Her first cousins, Linda Chang, 21, and Christopher Vang, 27, are at bottom. All three were killed in on Dec. 26 in a collision police attribute to street racing activity. (Photo via GoFundMe)

Reid says he discussed ways to bring in additional resources and educate himself on how to better get a handle on the problem of street racing.

“A lot of the people that illegally street race or do the sideshows modify their vehicles, that creates a level of danger too,” said Reid. “It’s also a nuisance. The decibel level is just through the roof.”

Reid says having the bureau involved adds another layer of enforcement and can lead to the imposition of hefty fines for illegal vehicle modifications. Coupled with insurance premiums that can increase as much as 50%, expenses from court fees, citation fines and impound costs, could reach as much as $16,000, police say. 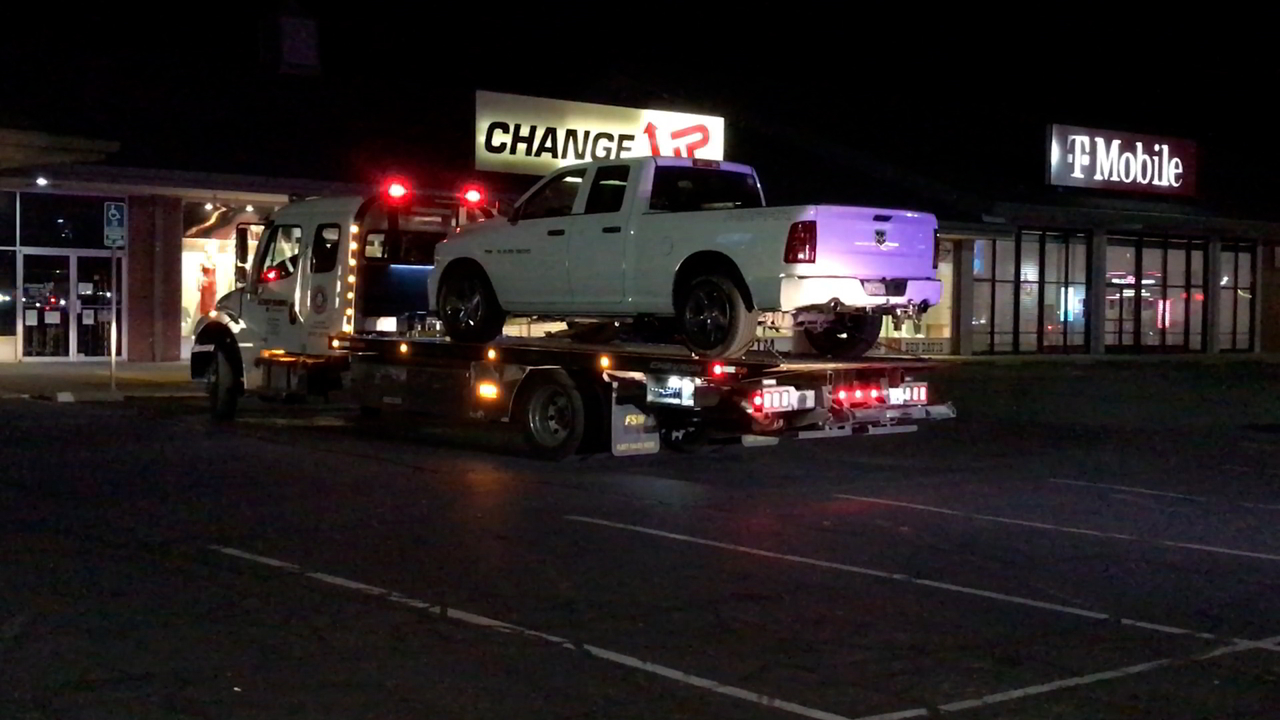 Police impound a truck at Blackstone and Shaw because the driver had an expired license. (GV Wire/Jim Jakobs)

Reid says it’s not entirely accurate to portray all street racers as young people just out to have a good time.

“We’ve seen people that are nearly my age doing this thing,” said Reid. “It runs the whole schematic of people and demographics and races and age. There’s a lot of females that get involved in this.”

He says the illegality of the racing isn’t just confined to the people actually doing the racing.

“It’s equally illegal, a misdemeanor, to watch a sideshow or to watch a street race,” explains Reid. “Tonight, we’re going to be citing people for that misdemeanor infraction as well.” 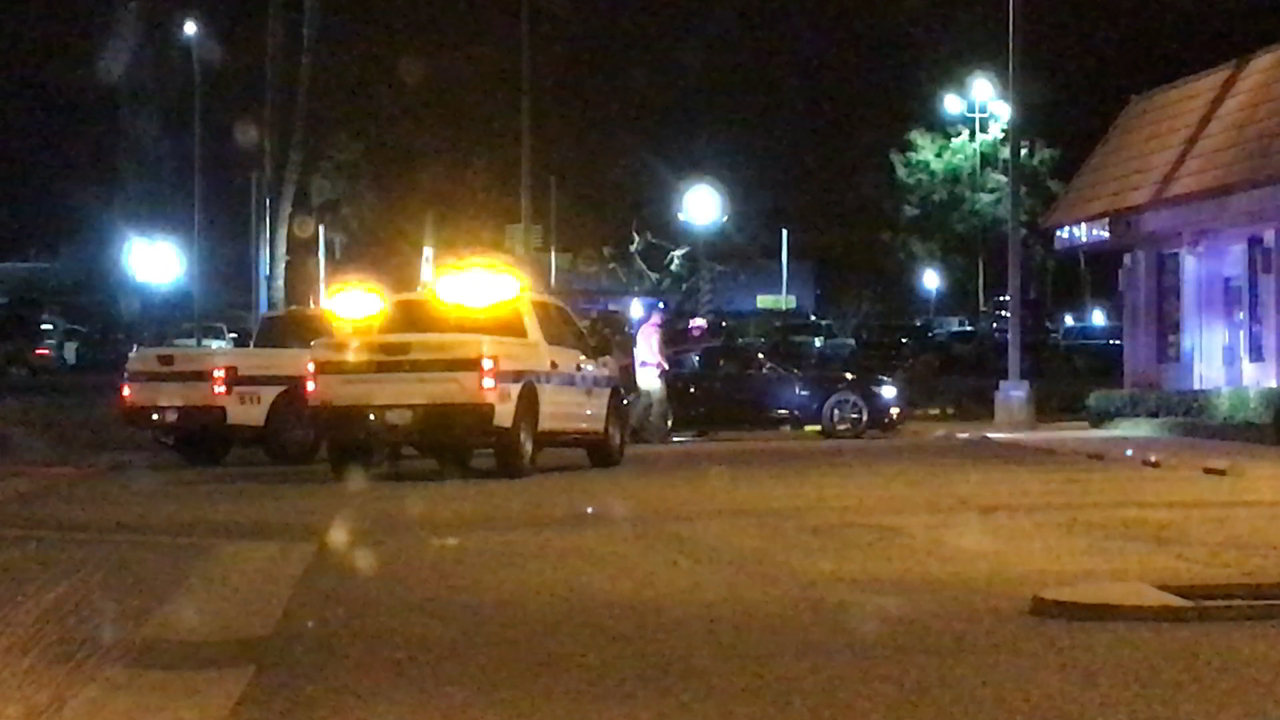 Reid says Saturday’s show of force was not a one-time operation.

“We’re going to be out here a lot,” said Reid. “Same group, same operational scheme, same thing, varying the hours, the dates and the times.”

Police will also be changing some of the shifts for their motorcycle units to make them more available during the times when illegal racing is more likely to occur. 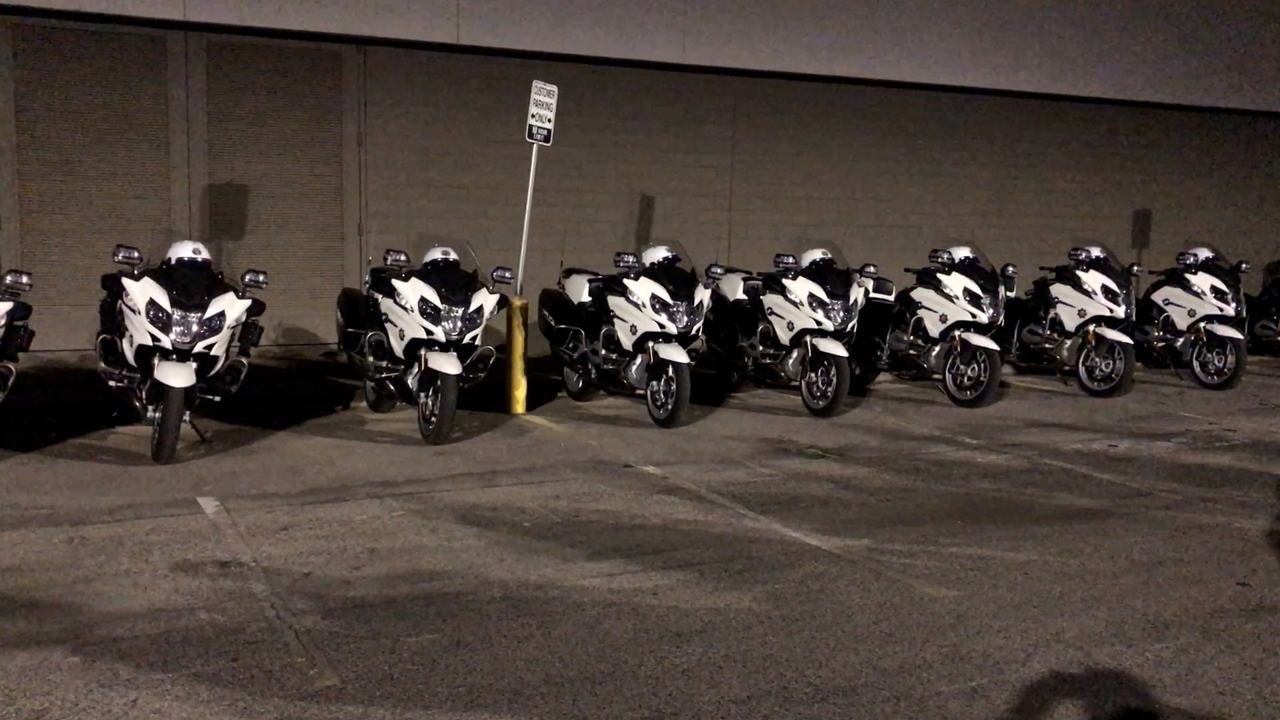 Police motorcycle units lined up during the pre-operations briefing ahead of a street racing crackdown on Saturday night. (GV Wire/Jim Jakobs)