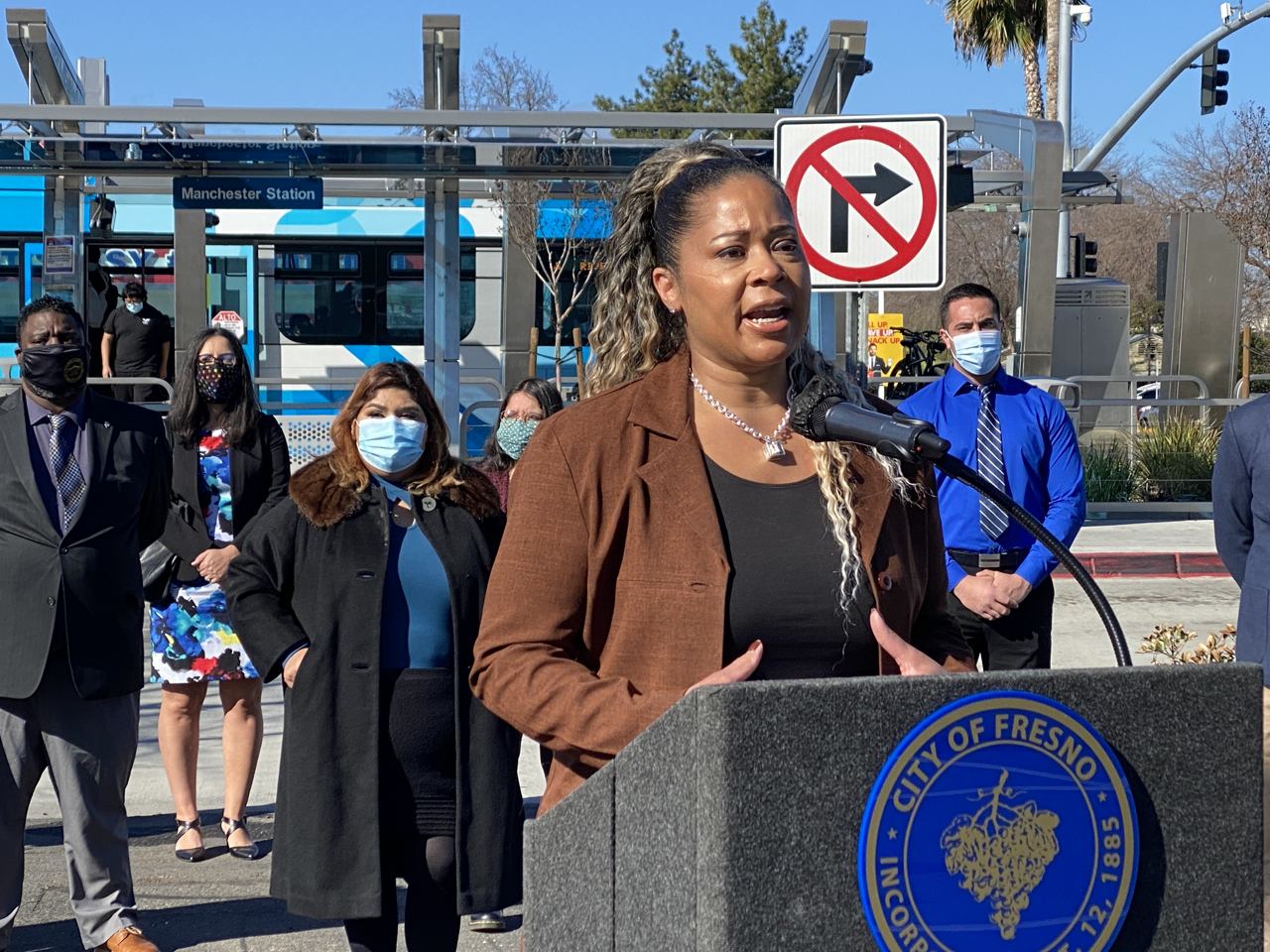 Fresno Unified School Board Clerk Keshia Thomas minced no words Wednesday night in an angry, eight-minute diatribe about the School Board’s review last month of the charter petition for Golden Charter Academy School, which was founded by her son-in-law Robert Golden.

She called an analysis by the nonprofit group In The Public Interest “printed lies” that several board members then used to try to “convict” Golden, an Edison High alumni who returned to his hometown to start the school after retiring as a pro football player with the NFL.

“Yet again, our community saw a black man being put on trial without just cause,” said Thomas, who is vice chair of Golden Charter’s board of directors. “… Robert is one of the most caring, self-driven, respectful, and hardworking young men I’ve ever met. And I did not say that because I’m partial to him and he’s married to my daughter. I say that because anyone who meets him says the same thing.”

In The Public Interest had raised questions about Golden’s lack of experience running a charter as well as the school’s enrollment goals. It also cited errors and irregularities in budget documents, potentially illegal “self-dealing”, and inappropriate terms in a lease agreement for a former parochial school that will serve as the charter’s first home.

Thomas said the analyst, Clare Crawford, was an outsider with no ties or interest in the community or district students who was trying to “enact a ridiculous political agenda.”

Thomas specifically called out fellow trustees Carol Mills and Veva Islas for their questions about the charter school application, saying their “concerns were bogus and disrespectful.

“Not only did you all lead one of the most disrespectful, prejudiced witch hunts I have ever seen, but then Trustee Islas, you tried to assassinate my character by saying that there had been a lot of pressure on staff in regards to this specific board member who is related to this school, meaning me. I had done nothing but be open and honest and forthcoming, to say the least.

“I would not even talk to anyone while this petition was being brought forth, nor did I sit in any meetings or call staff. So let me set the record straight. I did not have a conflict of interest in the first place. I chose to recuse myself because of my desire to be above reproach.”

When Thomas concluded, board President Valerie Davis thanked her for her comments and then noted that the charter had been approved on a 4-2-0 vote.

“Not without a hard fight,” Thomas said, to which Davis responded, “Not everything is pretty on this board, and we get through it just the same.”

Related Story: Fresno Board OK’s ‘Disneyland of Schools’ Charter Despite ...

Board Says No for Second Time to Bond Committee Nominee

Fresno Unified Trustee Terry Slatic is now 0-2 for his nomination of resident Andrew Fabela to serve on the Citizens’ Bond Oversight Committee, which meets quarterly to keep an eye on how the district is spending school bond tax dollars. Thomas asked Slatic to explain why he was putting Fabela’s name up a second time after the board voted in April 2020 to reject the nomination.

At that time, the trustees opposing the nomination — Claudia Cazares, Thomas, Islas, and Davis — did not offer an explanation of why they opposed Fabela’s nomination. Fabela told GV Wire℠ subsequently that he believed it was partly due to their animosity against Slatic and partly because “they don’t like the questions I ask the board.”

Slatic responded to Thomas that Fabela has an “encyclopedic knowledge” of the district, its projects, and its issues, and has attended more board meetings over 16 years than any of the trustees except for Mills and Davis, the board’s two senior trustees.

Cazares noted that Slatic has a right to make a nomination for the bond oversight committee but said she remains opposed to Fabela’s nomination because he “has been known to use obscenities against people that they disagree with.” She then detailed statements that she said Fabela had made: “Too ‘effing’ stupid, their brain is screwed up, they’re too stupid, too much of a moron …”

Such a person, she said, would not be a good fit for a citizens committee where disagreements might naturally arise but would need to be respectfully dealt with.

Cazares told GV Wire℠ on Thursday that the comments attributed to Fabela were posted online with a July 26, 2019 Fresno Bee article on Fresno Unified, but were subsequently deleted.

In a case of deja vu, the board again voted 4-2-1 to reject Fabela’s nomination, with Mills joining Slatic in opposition to the rejection and Elizabeth Jonasson Rosas again abstaining. So for now, the Bond Oversight Committee will continue to operate with community representatives from six of the district’s seven trustee areas.

Committee members are chosen not only to represent trustee areas but also different constituencies such as parents, taxpayers, and business owners.

And Johnson, whose nomination was approved last April, was 0-1 after missing the November meeting. Because of the pandemic the committee did not meet in May and August.