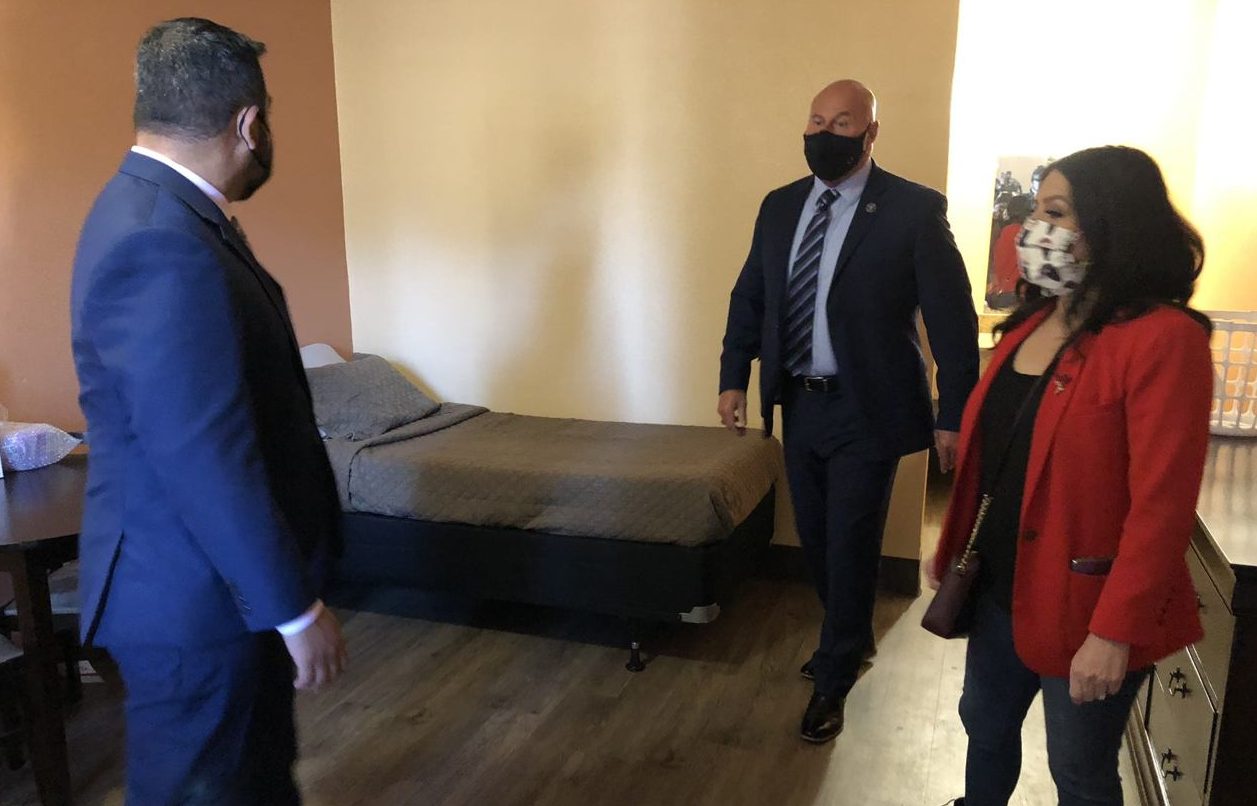 “We are here because we took advantage of the pandemic crisis that brought some resources to tackle this equally tragic crisis, the crisis that our most poor and our homeless have been facing for years alone. That’s a housing crisis,” Fresno City Councilman Miguel Arias said.

It will also provide a short-term housing option for the homeless population who are living near the freeways, part of Fresno Mayor Jerry Dyer’s “Project Off-Ramp.”

Dyer said the city’s homeless effort is at a turning point.

“I really do feel for the first time in my career that we have a plan and we have a partnership and we have the ability to be able to reduce our homeless population significantly,” Dyer said.

Instead of seeing a 70% increase as a recent homeless count showed, Dyer thinks there can be a 70% decrease. Evictions Could Cause Homelessness to Rise 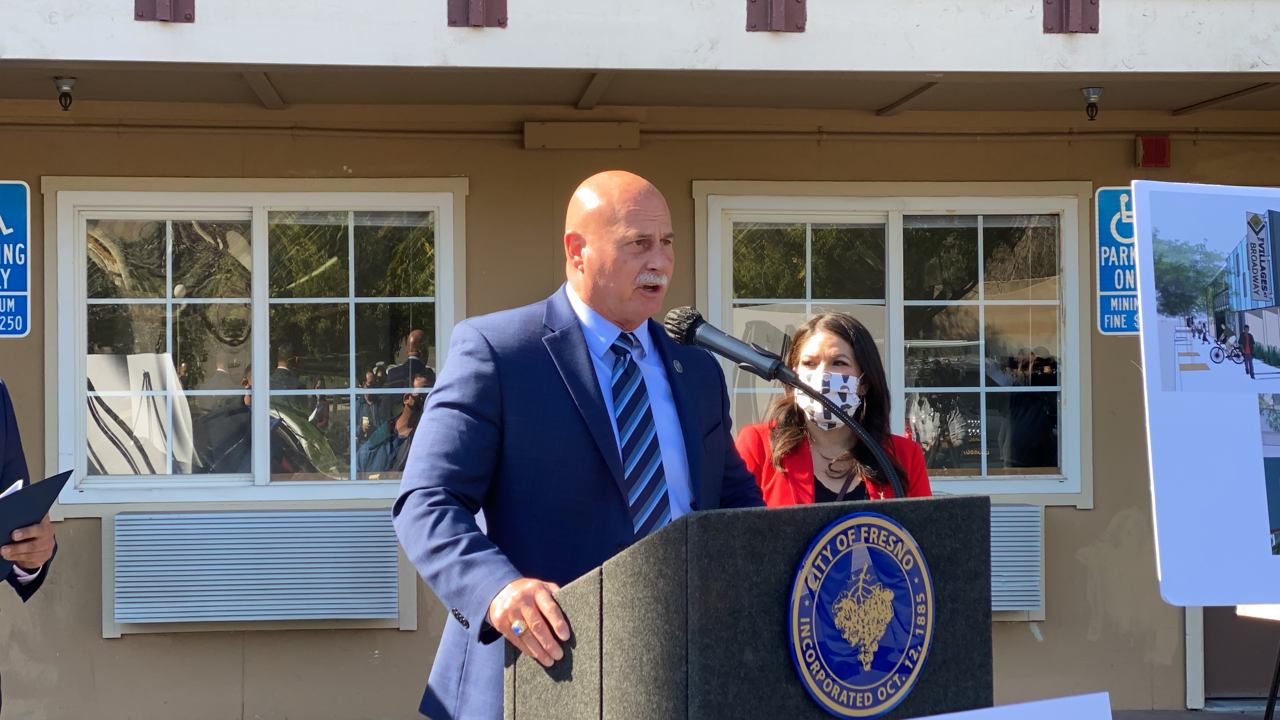 “For the first time in my career that we have a plan and we have a partnership and we have the ability to be able to reduce our homeless population significantly.” — Mayor Jerry Dyer

Arias estimates there will be 2,000 more homeless residents next year with eviction moratoriums expiring. The city plans to purchase more properties and to also provide social outreach such as drug and mental health services.

Last year, the Fresno Housing Authority purchased the Welcome Inn, along a Highway 99 frontage road south of Olive Avenue, and three other nearby properties. The effort is intended to provide a stable housing option for people unable to find a another place to live.

“We are going to be part of working with people so they get to have a journey into their next future,” FHA executive director Preston Prince said.

FHA used state Project Homekey funds for the purchases. Prince says the long-term goal is to convert the motels into affordable housing units.

An Off Ramp for Homeless

“We had sex trafficking that occurred out here for years. We had drug sales that were occurring; a lot of gang members there were frequenting this area. And ultimately that resulted in a lot of violence and a lot of shootings,” Dyer said.

“It does something more than just provide an off ramp for a homeless population and an onramp to housing and services and a productive life,” Dyer said. “It also addresses something that is plaguing our city and that is the affordability of housing that we know that we are substantially below where we need to be as a city.”

Jody Ketcheside, regional director for homeless advocate group Turning Point, said short-term residents are expected to transition to other housing within 90 days. But, she said, that is not a hard time limit.

Room 105, on display, looks like a small motel room. Along with a bed and dresser, the room has a small refrigerator and microwave.

Arias said new programs will be instituted to ensure local motels are being properly maintained.

Next week, the city will start inspecting motel properties — the same way the city inspects apartments and other rental units.

Arias said the city will also ban the practice of renting rooms by the hour.

“Because we know what happens when you rent a motel room by the hour,” Arias said, a reference to the area’s reputation for prostitution. 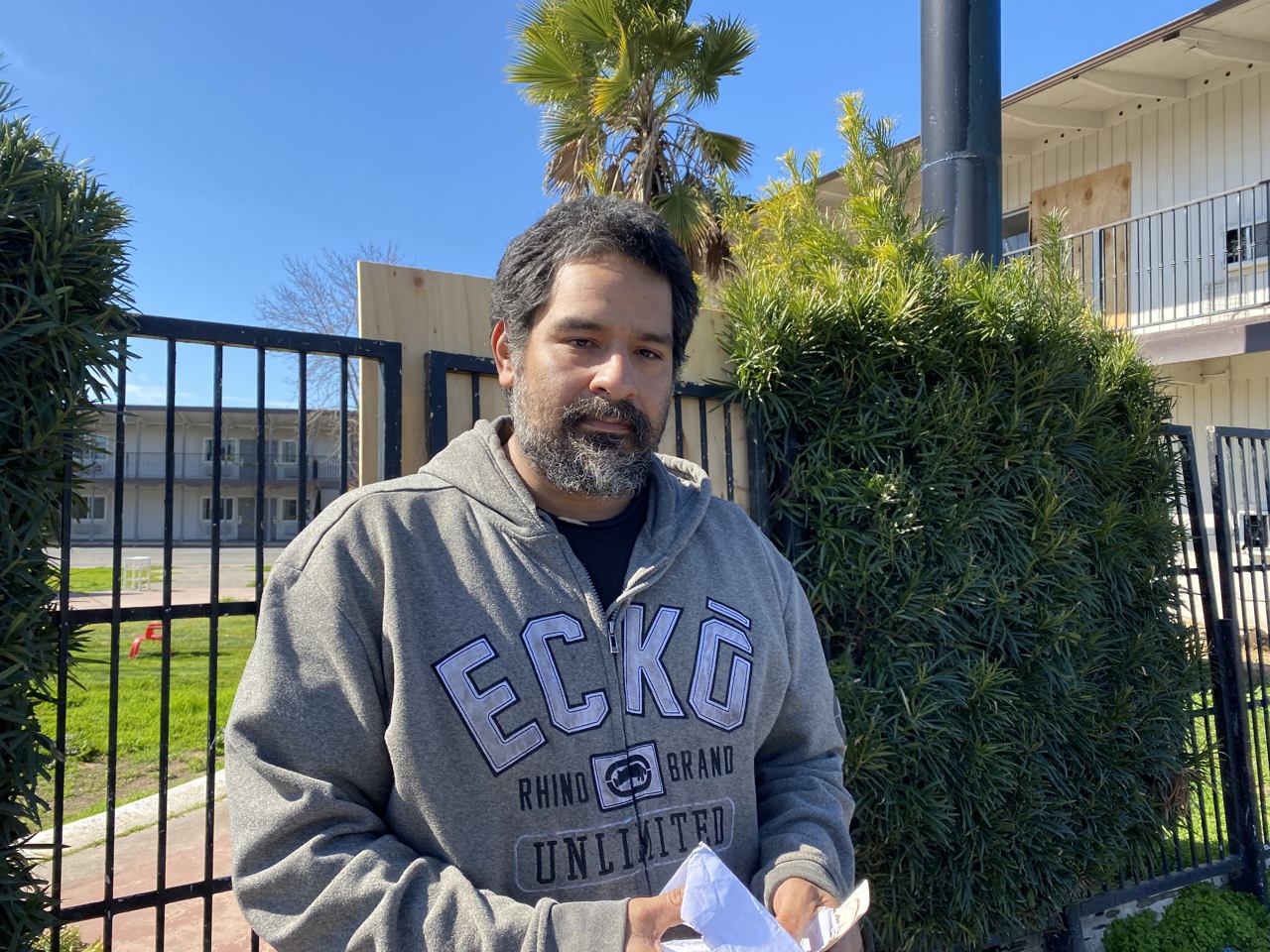 “I have to believe they will make this one nicer too.”— Travel Inn resident Joel Pantoya

Financially, it is more cost efficient to renovate existing units than build new affordable housing developments, Arias said. Recent low-income housing projects in Fresno have cost as much as $400,000 a unit to build; renovating a run-down motel costs about $65,000 per unit.

“It is the smart and fiscally responsible choice to make as a city to acquire more dilapidated motels and convert them to affordable housing,” Arias said.

Arias said that the property next door, the Travel Inn, would be the next motel to be renovated.  The city has purchased the property and is looking at using $5 million in federal emergency relief funds to buy more motels like it.

Currently, the Travel Inn is in run down condition with a number of rooms boarded up on the outside. Patches of grass exist where it appeared a pool once was.

Joel Pantoya says he is one of the last remaining residents at the Travel Inn. He has lived there 10 years.

“I don’t know if it passes code for housing, but a lot of the rooms are livable,” Pantoya said.

Arias says some current motel owners are charging tenants upwards of $2,000 a month in rent for single rooms.

Pantoya says his rent is $750 a week, though he gets a  reduction for assisting with some upkeep of the property. He is optimistic that improvements are on the horizon, after seeing the renovation of the Welcome Inn.

“I have to believe they will make this one nicer too,” Pantoya said. A look through the wrought-iron fence at the Travel Inn in Fresno. The city has purchased the property and will soon begin renovations. (GV Wire/David Taub) A look at the balcony of the Travel Inn in Fresno, which has now been purchased by the city of Fresno. (GV Wire/David Taub) The city of Fresno has purchased the Travel Inn and will renovate to provide stable, affordable housing for low income residents. (GV Wire/David Taub)

US Life Expectancy Drops in Pandemic, Most Since WWII