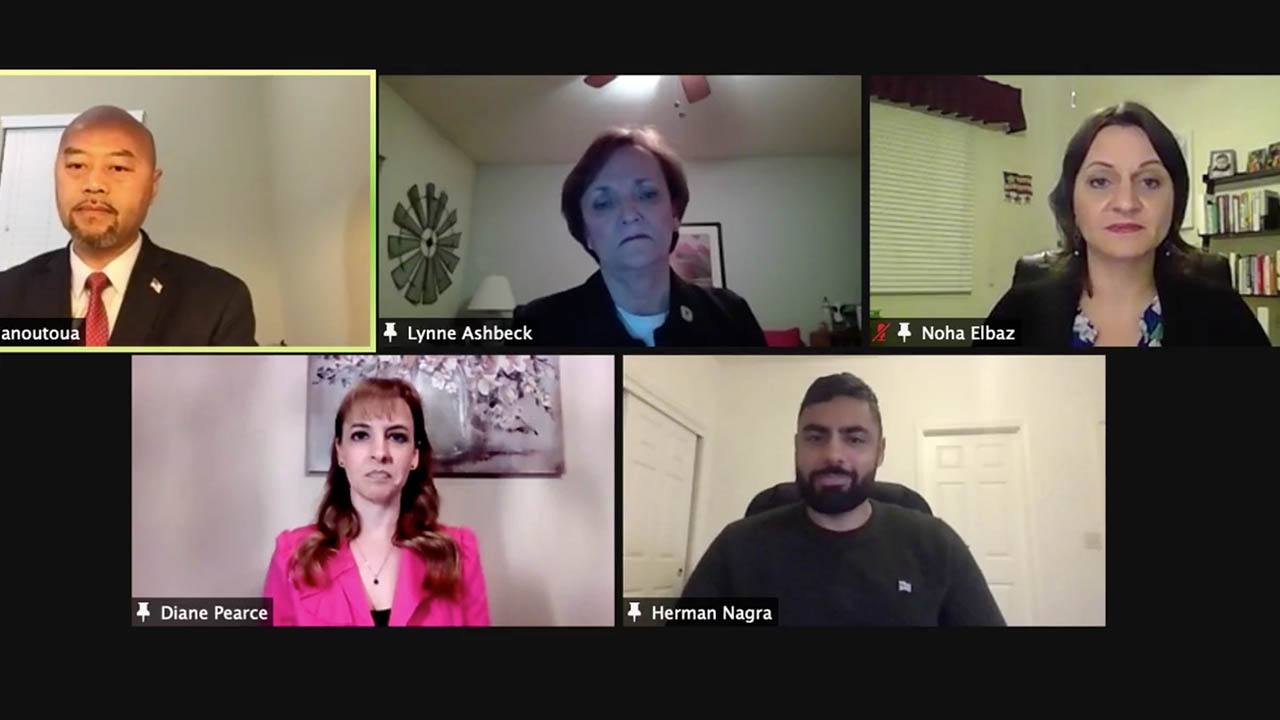 The rising cost of housing that hinges on how many miles people drive, the impacts of COVID-19 on the local economy, and a candidate’s recent arrest for stealing yard signs were some of the topics broached during a Clovis City Council candidate forum Wednesday night.

All five candidates — the largest field in 13 years — participated in the one-hour virtual forum hosted by GV Wire℠ and moderated by senior reporter David Taub.

This will be the last time the city conducts an election during an odd-numbered year. It may also be the final at-large election for the Clovis City Council.

Here’s a series of questions asked during the forum, with a summary of answers by the candidates.

Taub asked whether Clovis is building the right mix of homes and affordable housing.

Nagra: “I wouldn’t want a conflict of interest, so I would never take a donation from a big builder.” He went on to say he’d like a community where people can work close to where they live, but cautions against a certain type of housing. “With high density housing, we can have problems with crime.”

Mouanoutoua: “One of the policies we have is to have diverse housing products in our general plan, and we are following that pretty much to the T.” He says his 10 years of experience on the planning commission help him realize it’s a very complex issue. “I understand all the applications that come forward. And then you also have to understand what the state laws are.”

Ashbeck: “Housing is an equation, it’s partly a city role, and it’s partly the free market role.” She doesn’t believe high-density housing will lead to an increase in crime if it’s planned appropriately. “It really is a combination of the role the city can play and with a free market.”

Taub said a new state law sets fees for Vehicle Miles Traveled (VMT), which could increase housing costs for new home owners, and asked candidates how they would reach the state mandate.

Pearce: “All of these policies are kind of in line with that same type of thinking where we want to force people out of their cars.” She says city leaders need to do a better job of being vocal about policies like VMT coming out of Sacramento at the outset.

Ashbeck: “We’re working on transit routes both in Clovis, and connecting to Fresno. So we have an opportunity to make it work and Clovis will make it work.” She says it’s a partnership between the city and builders to find the best way forward.

Nagra: “You should be able to shop, live, and work in your local proximity.” As a gas station owner he says he does want people to be able to drive more, but he said the city has to take the new law into account.

Mouanoutoua: “VMT hurts the poorest among us. It’s going to increase the price of a home by $20,000 to $40,000.” He says the City of Clovis has worked hard to find ways to mitigate some VMT cost by planning more transit that the state will see as a way to offset some of those vehicle miles.

Elbaz: “These mandates are brought down for a reason. And I do think they do us some good.” She does think it’s important for the city to find ways to plan ahead for them and increase access to public transportation.

Taub asked Nagra about his arrest on a felony grand theft charge in connection with accusations that he stole his opponents’ campaign signs, and whether Nagra had anything to say to them.

Nagra: “I said it right from the beginning, I did remove signs from city property and from private property where permission was given after I talked to owners and property management companies because tenants don’t have the same rights as a property manager or the owner of that land.” Nagra says he’s called code enforcement in the past and says they just take too long to respond.

Several candidates then responded to Nagra.

Ashbeck: “We don’t do that here. So I as a resident, find it offensive. You need to live with your own choices.”

Elbaz: “We also can’t cherry-pick what laws we feel are being followed quickly enough. Who should do what? We have a fantastic police department.”

Mouanoutoua: “We’ll just speak about facts. And so, you know, I called all the candidates that morning (of the sign theft). What happened to my signs? Each one said I didn’t do anything.” He says he put his 48 signs up at midnight and by 6:30 a.m. they were gone.

Taub asked the candidates about the city’s COVID-19 response, and most were generally in favor of the way the city responded. Several expressed frustration at the mixed messaging by the state of California.

Ashbeck: She said the ever-shifting priorities coming from Sacramento made the situation more difficult because of the “really inconsistent messages.”

Pearce: She argued that local control should have mattered more throughout the pandemic. “Most of the response has been borne out of frustration.”

Nagra: He took direct aim at city leaders. “I do not believe our city has got it right. We don’t have a clear, concise message.”

Mouanoutoua: He says he believes the city did the right thing through the COVID-19 crisis. “What Clovis did was we use our relationships. We worked closely with the businesses.”

Elbaz: “Because there has not been a federal response and having everyone on the same page, there has been a lot of scramble.” She says that unevenness has created a big hardship for small businesses.