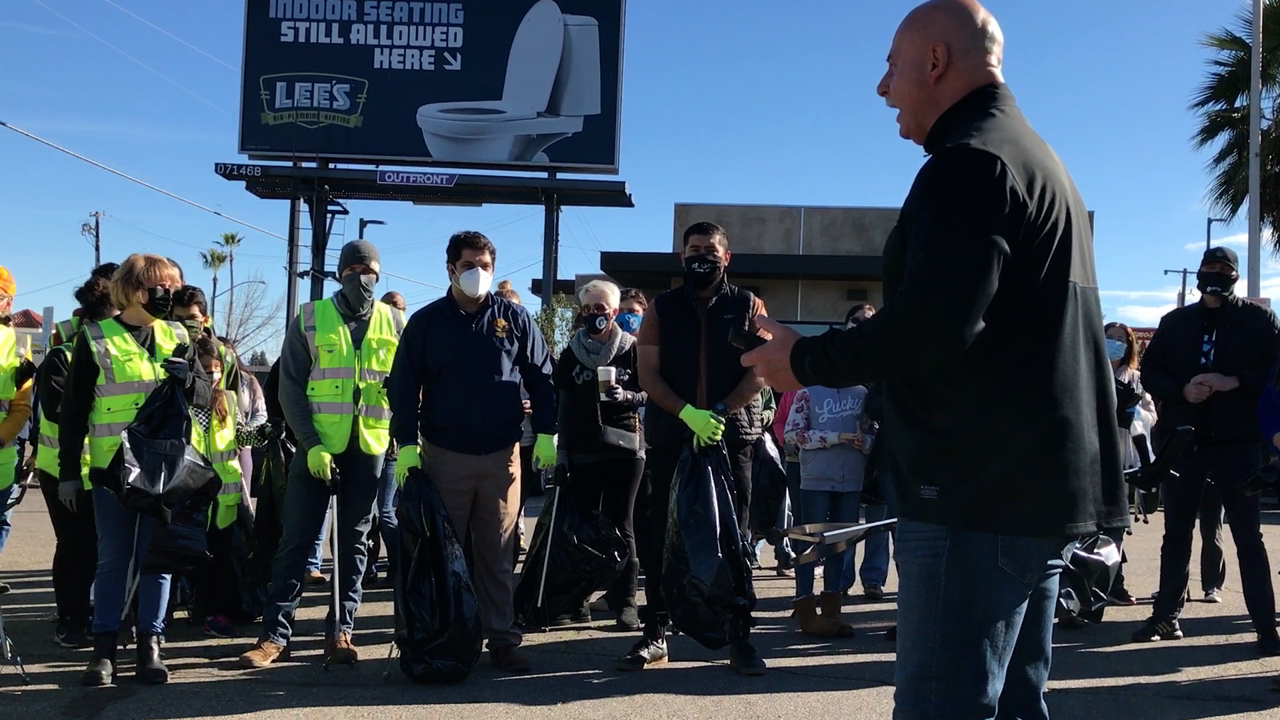 If you drove by the Carl’s Jr. on West Shaw near Highway 99 over the weekend you saw what appeared to be a small army clad in safety vests and wielding trash grabbers. If you looked really hard you probably saw Mayor Jerry Dyer out there working alongside the residents that showed up.

“I know it’s going to sound really corny, but he (Jerry Dyer) is really putting the unity in community,” said Fresno City Councilmember Mike Karbassi during the kickoff to the event. 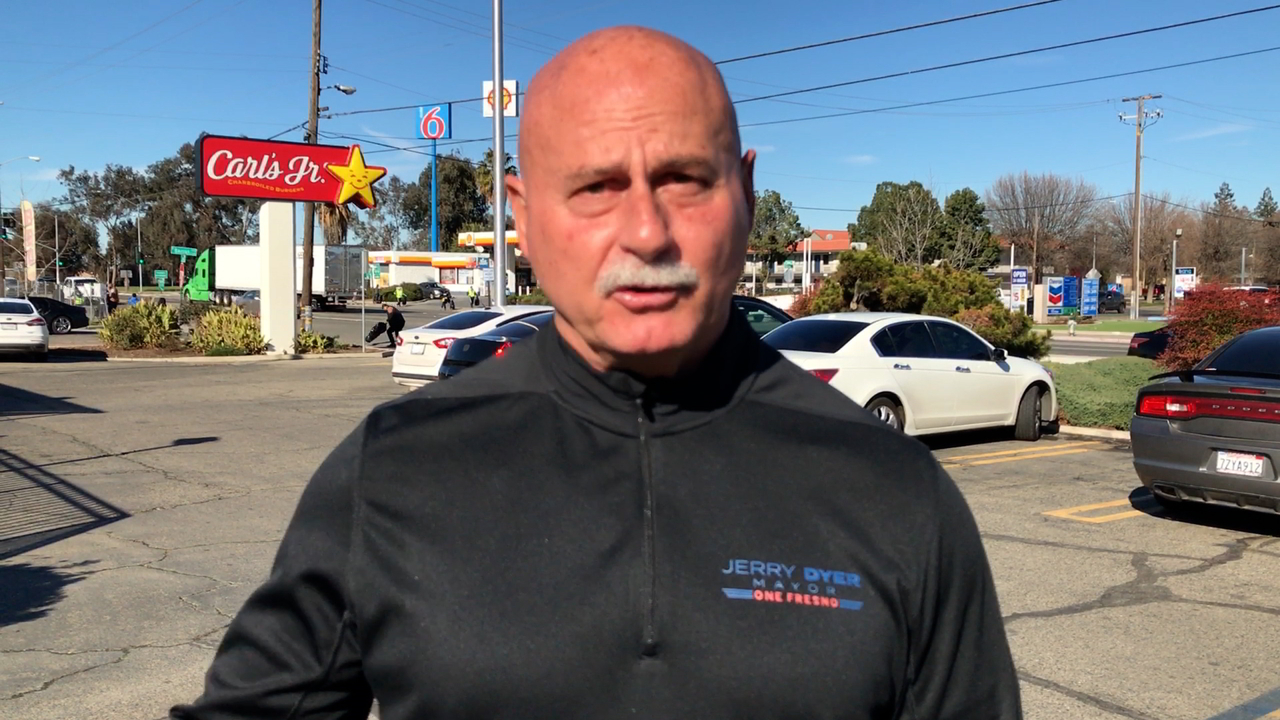 “This is our ongoing initiative to restore curb appeal in our city, to restore pride in our neighborhoods and throughout our community.”–Fresno Mayor Jerry Dyer

Close to 100 volunteers showed up and picked up over 100 bags of trash in two hours according to ‘Beautify Fresno’ organizer Mark Standriff. People from other areas of the city joined with neighborhood residents for the event.

It wasn’t just litter that was cleared from the sides of the road. “Yard signs, an old vacuum cleaner, and part of a street light,” were also removed, according to Standriff.

Beautify Fresno is a city-wide effort to clean neighborhoods, streets, and highways by partnering with local organizations, non-profits, churches and service organizations, and individuals in the community. It’s part of the affiliate network of Keep America Beautiful, the nation’s iconic nonprofit community improvement organization.

“This is our ongoing initiative to restore curb appeal in our city, to restore pride in our neighborhoods and throughout our community,” said Dyer. “It’s to bring people together for a common cause, and that common cause is beautifying Fresno.” 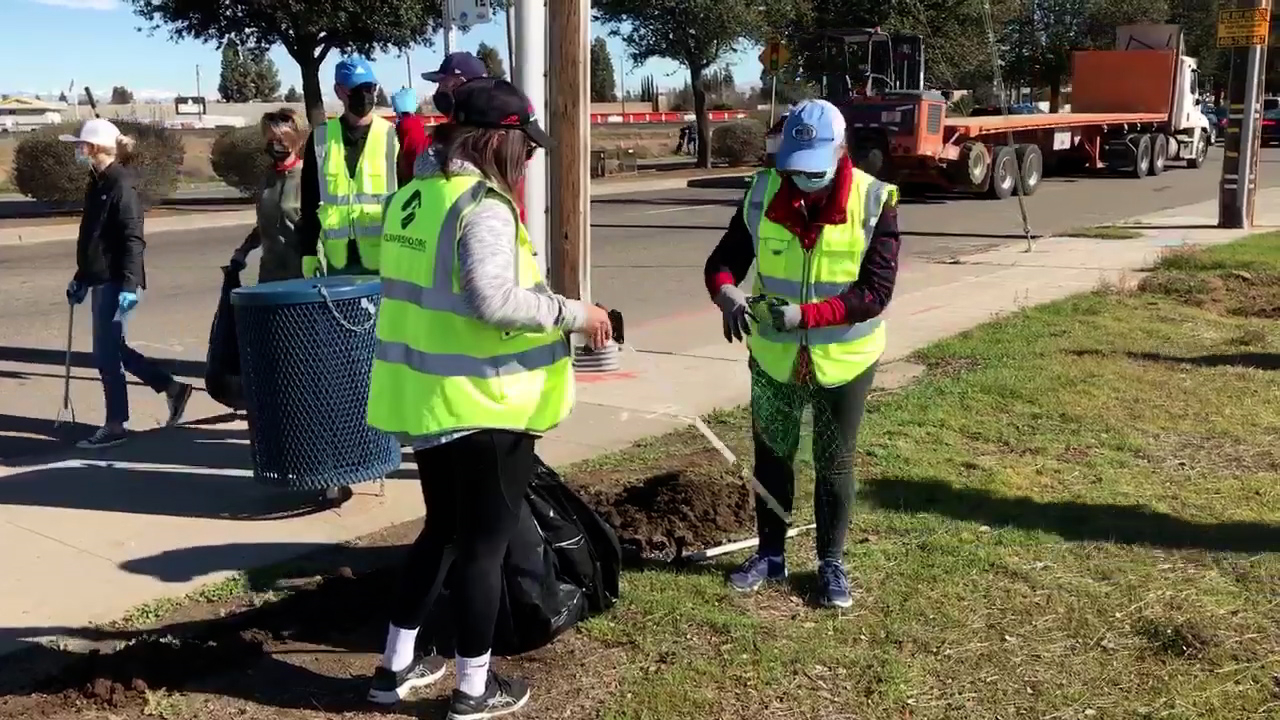 More events are in the works and will be posted on the Beautify Fresno website.

“What we need to do is build momentum, build excitement, and that will become contagious throughout Fresno,” says Dyer.

Dyer says the next cleanup is this coming weekend in City Council District 4, represented by Tyler Maxwell.

Dyer says city crews will also be working in the area the week leading up to Saturday’s volunteer event. “We’re going to come out, pick up litter, and restore that neighborhood as well,” said Dyer. “We’re going to go into a neighborhood and show some love,” says Dyer of yet another event coming up on Valentine’s Day weekend. He’s calling it the ‘Valentine’s Blitz.’

“We’re going to fill potholes and replace some of the broken sidewalk, remove trees, trim trees, paint over and remove graffiti, and then have the volunteers come out and pick up trash in the neighborhood,” Dyer said. 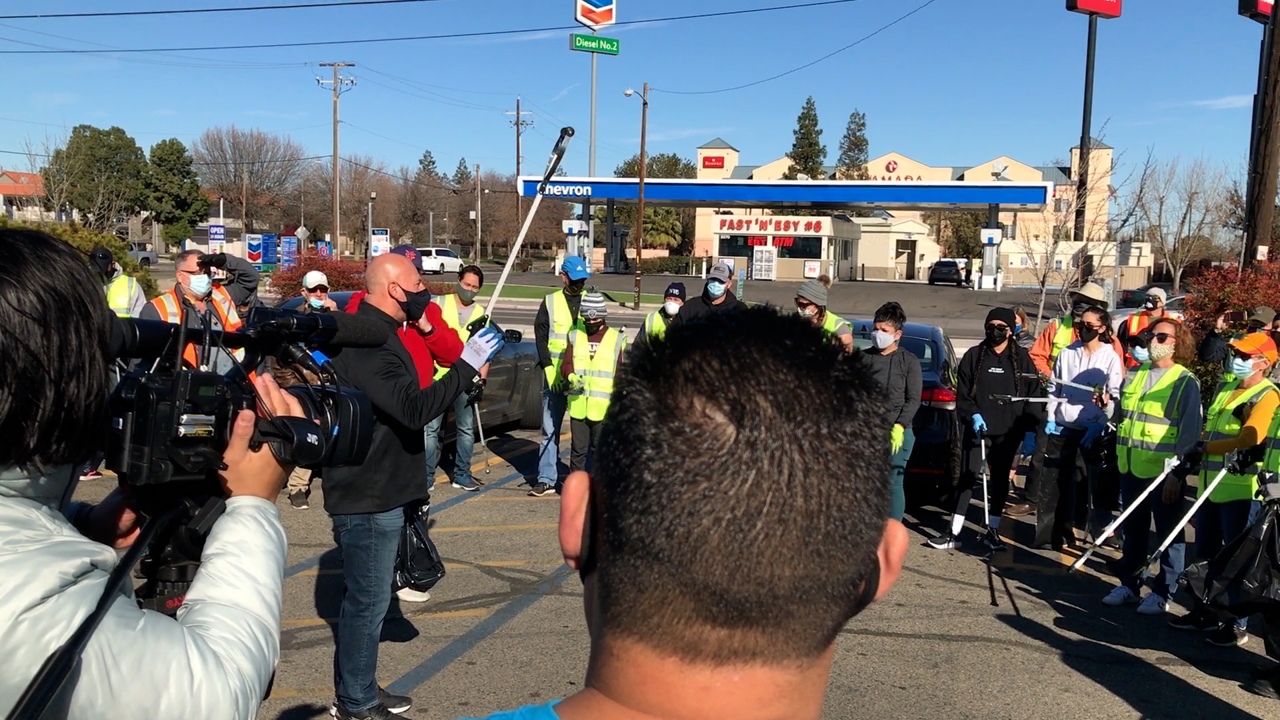 Mayor Jerry Dyer holds trash grabber in the air to rally nearly 100 volunteers before heading out to clean up trash along West Shaw Avenue on Saturday, Jan. 30. (GV Wire/Jim Jakobs)

A Series of Cleanups

Dyer says this will be part of an ongoing series of events designed to bring all of the city’s resources together along with citizen volunteers to make the city look and feel better.

He says it’s about, “restoring that pride and curb appeal.”

Beautify Fresno is inviting service clubs, churches, Boy Scouts and Girl Scouts, professional organizations, and anyone who wants to lend a hand to join the effort.