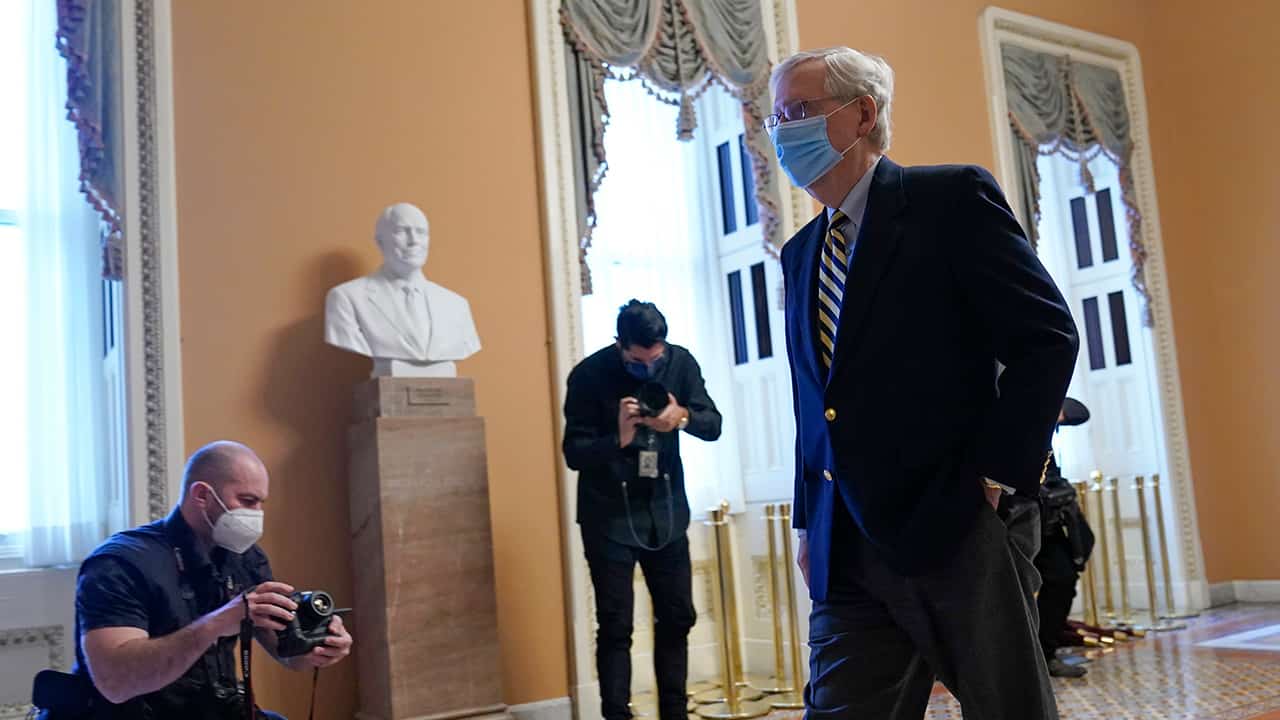 WASHINGTON — Senate Republican leader Mitch McConnell backed off his demand that Senate Democrats preserve the procedural tool known as the filibuster, easing a standoff with new Majority Leader Chuck Schumer as the two negotiated a power-sharing agreement in the closely divided chamber.

McConnell said late Monday he had essentially accomplished his goal after two Democratic senators said they would not agree to changing the rules to end the filibuster, which would require a 60-vote threshold to advance most legislation. Without the support of all Democratic senators, a rules change would fail.

“With these assurances, I look forward to moving ahead with a power-sharing agreement modeled on that precedent,” McConnell said in a statement. He did not name the Democrats, but West Virginia’s Joe Manchin and Arizona’s Kyrsten Sinema had expressed reservations to doing away with the tool.

Schumer’s office said the Republican leader had no choice but to set aside his demands.

“We’re glad Sen. McConnell threw in the towel and gave up on his ridiculous demand,” said Justin Goodman, a spokesman for the Democratic leader. “We look forward to organizing the Senate under Democratic control and start getting big, bold things done for the American people.”

The standoff between the two leaders all but ground the Senate to a halt in the early days of the new Democratic majority as the two sides could not organize the chamber’s routine operations for committee assignments and resources. The stalemate threatened President Joe Biden’s ability to deliver on his legislative agenda.

Usually a routine matter, the organizing resolution for the chamber became a power play by McConnell once Democrats swept to control after the Jan. 5 special election in Georgia.

Even though McConnell did away with the 60-vote threshold to confirm President Donald Trump’s three nominees to the Supreme Court, he wanted to prevent Democrats from doing the same with Biden’s legislative agenda.

Democrats were under pressure from liberal advocates to do away with the filibuster so they could more easily pass Biden’s legislative priorities without the need for Republican votes. The Democrats hold the slimmest of majorities in the chamber, 50-50, with Vice President Kamala Harris able to cast the tie-breaking vote.

Schumer had not said he would end the process, but McConnell was taking no chances. McConnell made the brazen demand to keep the filibuster before agreeing to any other organizing terms for the Senate. Schumer’s refusal to do so put the chamber at a standstill.

The details of the rest of the organizing resolution were not yet set, but they were expected to proceed with any immediate changes to the filibuster, at this stage, appearing to be off the table.

‘This Is Me’: Rioters Flaunt Involvement in Capitol Siege