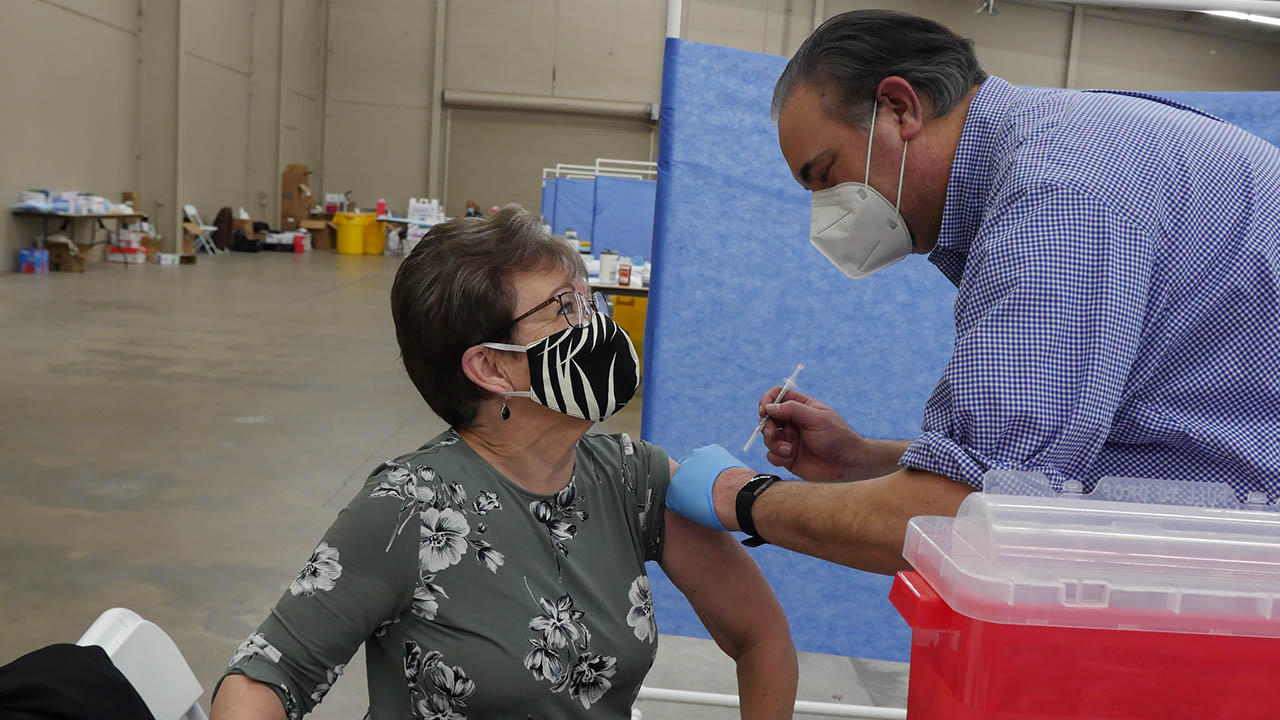 The good news is that California finally ramped up its lagging COVID-19 vaccination program last week.

The bad news, at least for Gov. Gavin Newsom, is that despite the surge, the state fell well short of the 1 million additional inoculations that he had promised during the 10-day period that ended on Friday.

Through Saturday, the state Department of Public Health reported, 1.3 million Californians had received shots of vaccine since the program began in December, roughly 200,000 below the goal Newsom had set.

The worst news is that California still has one of the nation’s lowest levels of administering the doses of vaccine it has been supplied.

The 1.3 million vaccinations are 36.7% of the 3.5 million doses California has received, well under the national rate and, according to Bloomberg’s constantly updated utilization chart, the sixth lowest of any state.

Over the weekend, as California’s failure to fully meet Newsom’s goal became apparent, the state’s news organizations delved into why it has been a persistent laggard despite a complex policy aimed at prioritizing vaccinations to have the greatest impact on spread of the deadly disease.

The consensus seems to be that the rollout plan’s many “tiers” were bewilderingly complicated and left providers on the front lines confused about who should receive the vaccines and mindful that Newsom had threatened them with punishment if they deviated from the state’s priorities.

Anthony Wright, director of the California consumer advocacy group Health Access, told the Sacramento Bee that the “complexity of the messaging” about the tiers made medical providers uncertain and “overly cautious.”

“The system is built in a way that does not provide for accountability. Everybody has somebody else to blame, and that is not serving us well at this particular time,” Santa Clara County Supervisor Joe Simitian, a former state Democratic state senator, told the San Francisco Chronicle. “In order for the system to work there has to be simplicity and convenience. And so far we’ve seen precious little of either.”

As the plan’s unwieldy nature became evident, the state pulled back and step-by-step began giving providers more leeway in deciding who could be vaccinated. Dr. Mark Ghaly, the state’s top public health official, acknowledged that the state’s approach “has led to some delays in getting vaccine out into our communities.”

Bottom Line: This Is Not a Proud Moment for California and Its Vaccination Shortcomings Will Cost Lives

There have been anecdotal reports that public employees not on the state’s official priority list have received doses of the vaccine, but it seems unlikely that anyone will receive the punishment that Newsom threatened.

The situation remains chaotic. At one point last week, following a federal directive, the state suddenly decided that anyone over 65 could be vaccinated. But the pronouncement caught providers by surprise and they were suddenly deluged with phone calls from elderly residents seeking reservations, many of which went unanswered as phone lines were overwhelmed.

Local health authorities, meanwhile, complained that while there are more than 2 million doses not yet used, they were having great difficulty getting them into vaccination sites. Many blamed a slow-acting computer program that the state was using to manage supply and demand.

Bottom line: This is not a proud moment for California and its vaccination shortcomings will cost lives.