SACRAMENTO — A Sacramento County Sheriff’s deputy was killed and a deputy was wounded in a shootout with a suspect who gunned down a K-9 dog before being fatally shot Monday night, authorities said.

A K-9 dog also was killed in the gun battle on the Cal Expo grounds following a vehicle pursuit that began when the suspect drove away during a vehicle stop.

The deputy who died was identified as Adam Gibson, a six-year veteran of the department, Jones said. He is survived by his wife and their infant child. 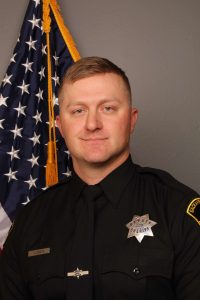 “They all take a vow. They all take an oath. They all are ready to lay down their lives so people can sleep in peace,” Jones said. “We never want to have to make good on that promise, and tonight, unfortunately, one young deputy did.”

The injured deputy was in stable condition, Jones said. He is recovering at UC Davis Medical Center and is expected to survive.

On Tuesday morning, The Sacramento Bee identified the dead suspect as Robert Stephen Caldron, 46. Caldron had a long criminal history and suffered from mental illness and drug use, his mother told The Bee.

Around 10 p.m. Monday, deputies pulled pulling over a driver in his 40s, whom the sheriff said was a parolee, at Arden Way near Morse Avenue. After stopping, the suspect took off in his vehicle and deputies gave pursuit. He ended up crashing his car near the horserace track at Cal Expo.

The sheriff said the suspect refused to comply with commands to roll down his windows or exit his vehicle.

When the suspect refused to exit the vehicle, deputies used less-lethal force and shot out the back window.

“One of the K-9 officers deployed a K-9 dog up to the vehicle to try and assist getting the suspect out of the vehicle. The suspect immediately shot and killed the K-9 unit, then immediately started firing at the officers,” Jones said.

“There were a lot of shots fired and so obviously the crime scene investigators will want to do their best to try and account for each of the shots,” the sheriff said. “There’s going to be a lot of interviews to try and get some of that information and, obviously, some of those interviews will take some time.”

It wasn’t immediately known what prompted the attempted traffic stop.

The Sacramento Police Department plans to handle the investigation.

Another Sacramento County Sheriff’s Deputy was wounded on Saturday night in a shootout that resulted in the death of the suspect.

The gunfire erupted at about 8:15 p.m. in an apartment complex in Carmichael, 10 miles northeast of downtown Sacramento. Rowe said deputies were checking on a car as part of their probe into a possible gang-related shooting when multiple shots were fired.

One suspect died at the scene and a second was taken into custody.