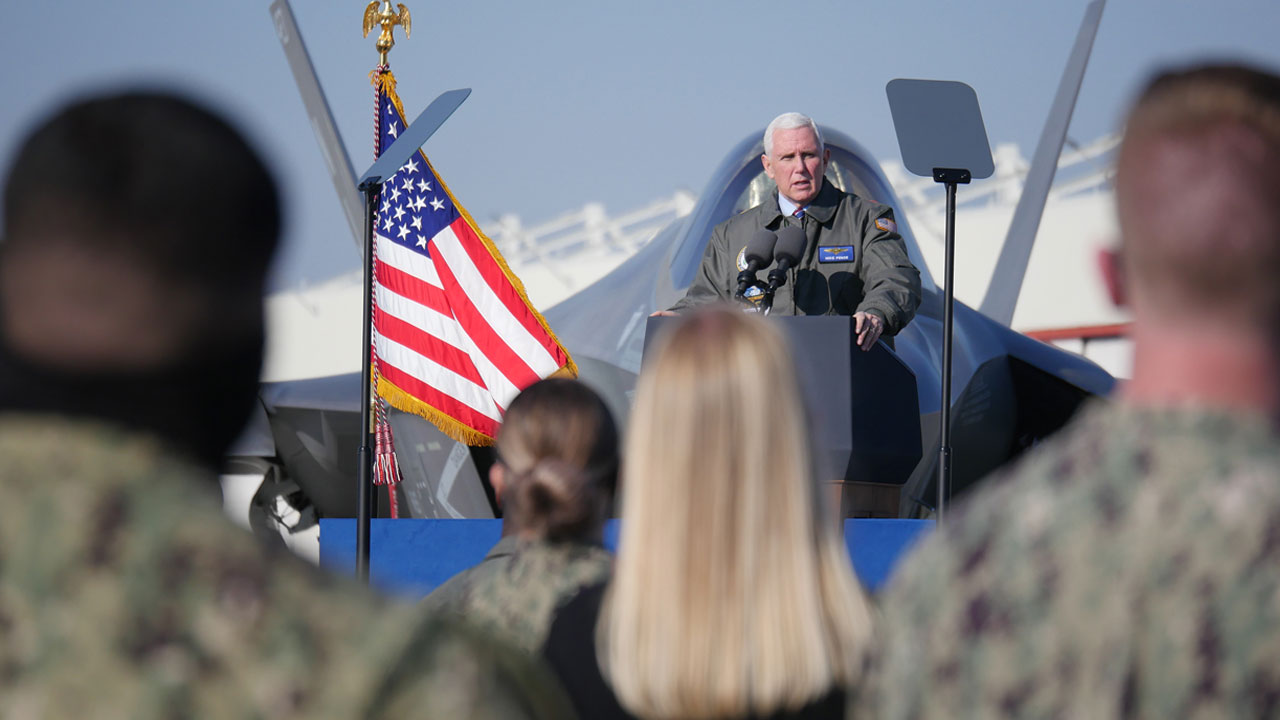 With only four days left until leaving office, Vice President Mike Pence came to the Central Valley on Saturday to reflect on the Trump administration’s efforts to build up the military. He spoke to approximately 80 sailors on the tarmac of Naval Air Station Lemoore.

The vice president, in a speech thanking sailors for their service, said the outgoing administration helped fix a “hollowed out” military.

“Four years ago, we inherited a military that had been hollowed out by devastating budget cuts,” Pence said. “Under the leadership of President Donald Trump, we’ve rebuilt our military, we’ve restored the arsenal of democracy, and we’ve enacted the largest increases in our national defense since the days of Ronald Reagan.”

This the Pence’s second and perhaps last visit to the Central Valley. He spoke at a Lemoore-area farm in July 2019. 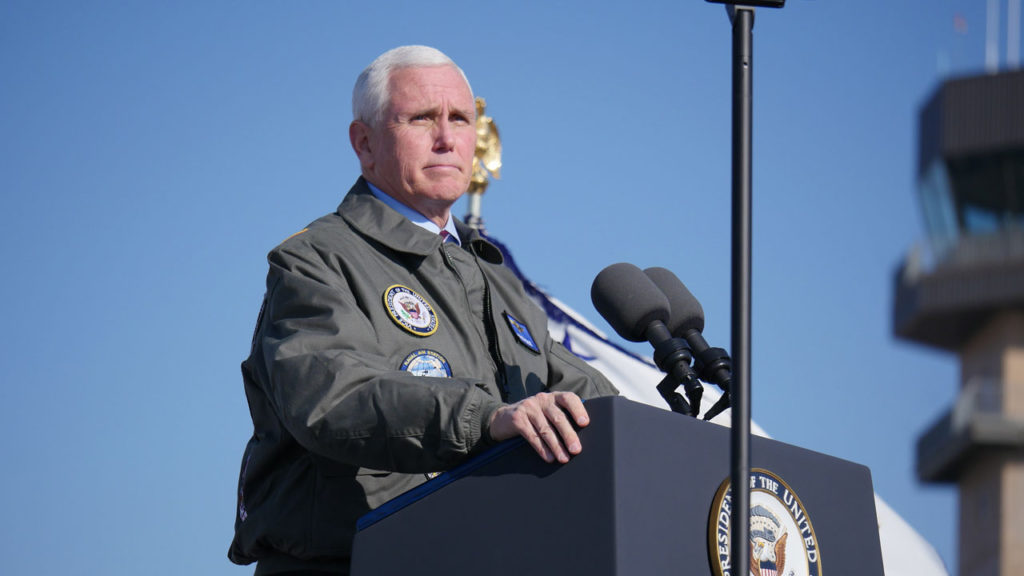 One of the civilian observers was Congressman David Valadao (R-Hanford), whose district includes NAS Lemoore.

Valadao briefly chatted with Pence during the visit. Just three days ago, the congressman was one of 10 Republicans to vote in favor of impeaching President Trump. For that, Valadao has received criticism from his own party, especially in the Central Valley.

He voiced no reservations about standing with the vice president at the event.

“I think he is a great man and loves his country. I came here to say hello and and watch him do something I know he does — appreciate the military,” Valadao said.

The congressman also stood by his vote to impeach Trump.

“The vote was a tough vote. But I do believe and I’ll stand by my vote, I believe what I did was right,” Valadao said.

Pence’s visit to NAS Lemoore was part of a busy final weekend in office. On Friday, he attended a memorial service for legendary pilot Chuck Yeager. Sunday, he will speak with 10th Mountain Division soldiers at Fort Drum in New York.

On Wednesday, President-elect Joe Biden and Vice President-elect Kamala Harris will be sworn in. Pence is expected to attend the inauguration, though Trump has said he, himself, will not.

After his speech to the assembled sailors on Saturday, Pence — wearing a green fighter jacket given to him by service members at NAS Lemoore — met in another part of the base with military leaders for a briefing.

The vice president is scheduled to stay in California overnight. His daughter Charlotte Pence Bond is married to Navy Lt. Henry Bond, a pilot based at NAS Lemoore. However, the White House offered no details of Pence’s whereabouts for the remainder of the day.

The Bonds wed in December 2019. This is believed to be the first public mention that the vice president’s daughter is residing in the Central Valley.

While at the Navy jet base, Pence talked up the Trump administration’s foreign policy strategy. One tenet was staying out of hot-zone conflicts.

“I’m proud to say, with just a few days left in this administration, but this is the first administration in decades not to get America into a new war,” Pence said to polite applause.

Pence pointed with pride to the Trump administration’s efforts to eradicate ISIS.

“Strike fighters stationed right here at NAS Lemoore were in the fight from early on hitting ISIS, giving terrorists no quarter, driving them from their strongholds. With the courage of our armed forces, I’m proud to report now, more than a year ago, we crushed their caliphate, captured the last inch of territory under the black flag of ISIS and took down their leader without one American casualty,” Pence said.

Pence also touched on the administration’s Iran policy and its support for Israel, which included the controversial move of the U.S. embassy from Tel Aviv to Jerusalem in 2018.

“I urge the incoming administration to stay the course. Do what we’ve done — stand up to Chinese aggression and trade abuses. Stand strong for a free and open Indo-Pacific and put America and our freedom loving allies first,” Pence said.

Pence Does Not Address Capitol Riots

Pence spoke for approximately 20 minutes and mentioned Trump only once by name. He did allude to the “administration” several times, however.

The speech was focused mainly on military matters. Pence did not stray from that message, making no mention of topics such as the riot last week at the U.S. Capitol nor reportedly calling Vice President-elect Kamala Harris with congratulations.

When Pence concluded, he chatted with sailors for about 15 minutes before leaving in his motorcade. Air Force 2 remained on the tarmac.

— Second Lady Karen Pence accompanied her husband and introduced him. She then left to speak to NAS Lemoore spouses at another part of the base.

— There were no other elected leaders spotted at the speech other than Valadao. It appeared the two had a brief chat at the conclusion of the speech.

— When the Pences emerged from Air Force 2, they proceeded directly to the staging area. Instead of the traditional “Hail, Columbia,” the vice president entered to “All Right Now,” the 70s rock anthem by Free.

— Flags for 49 of the 50 states appeared to the sides of the audience. Only Mississippi was missing. The “Magnolia State” debuted a new flag this week.

— There were no visible protesters, left-wing or right-wing, outside the base. The event was held well within NAS Lemoore and was closed to the public.

Biden Aims for Unifying Speech at Daunting Moment for US