Hundreds of cars were lined up when Rick Lembo arrived at Sierra Pacific Orthopedics early Friday morning to restart the drive-thru COVID-19 inoculations at the Spruce Avenue site.

The first in line had arrived at midnight, including one man who put a mattress in the back of his van to get some sleep while he waited, Lembo said. The man was holding a place in the line for his elderly

“He said, ‘If I would do this on Black Friday for a TV, I would do this for my grandma.’ “ — Rick Lembo, Sierra Pacific Orthopedics, quoting a man who lined up at midnight

Lembo said that he became concerned at 5:30 a.m. when he saw how many cars were already lined up. At 6 a.m., the decision was made to announce that the site could not inoculate everyone who was in line.

But many in the line that still snaked mid-morning Friday from Spruce to Cedar, Alluvial, and down Millbrook to the Herndon Avenue frontage road were bound to be disappointed to learn that Sierra Pacific, the only drive-thru provider in the city as of Friday, only had 1,000 doses available.

Lembo, Sierra Pacific’s director of sports medicine, said the center tried to notify people but had limited means to do so. He was hoping more doses might become available on Friday.

Lembo said that he had asked the Fresno County Department of Public Health to provide an emergency allotment so more vaccines could be administered at the site. But he learned just before noon that none were coming.

A Clovis Unified School District Police car could be heard driving slowly next to the line of cars, their engines idling for hours, announcing that the vaccine had run out and they should return on Tuesday when the vaccination clinic resumes. 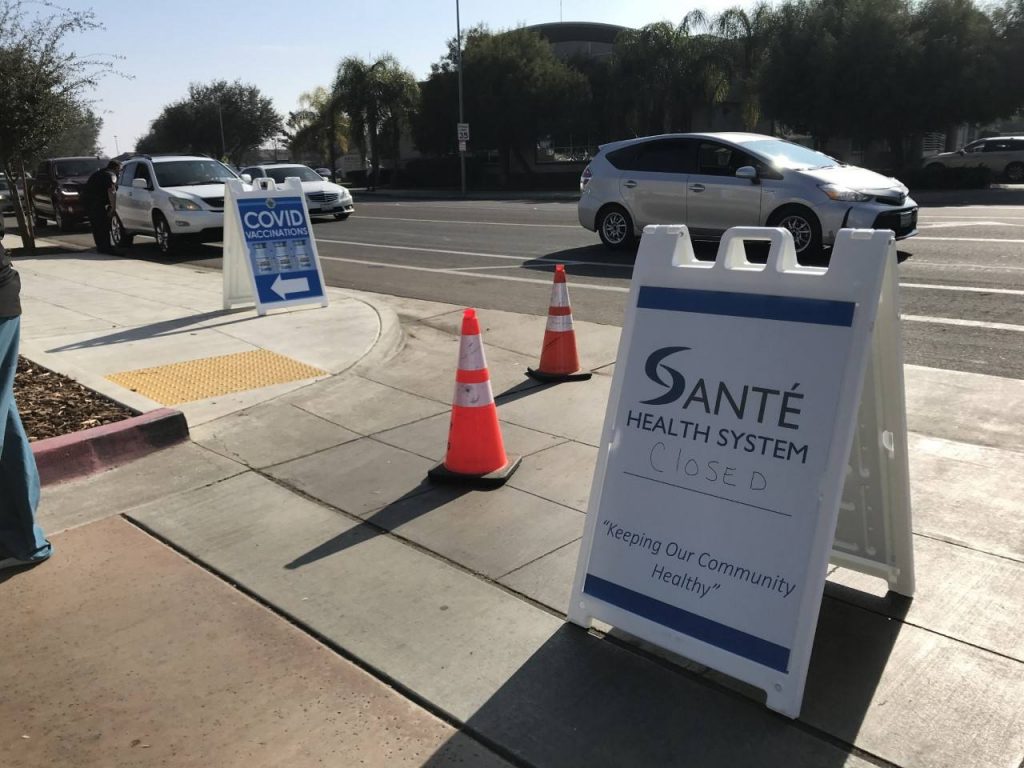 Sierra Pacific is getting its vaccine directly from Moderna, the manufacturer, through McKesson, the distributor, and not from the county, but those doses are going fast, Lembo said.

The next shipment of 7,500 Moderna doses will come to Sierra Pacific on Tuesday, he said.

Lembo said Sierra Pacific is seeking vaccines through the county, and if any arrive on Monday the center will reopen to vaccinations. Sierra Pacific is putting updates on its Facebook page, CEO Jeremy Eland said.

Seventy-five and Older Only

On Friday, the center transitioned back to providing vaccines only to those age 75 and older, based on direction from the Fresno County Department of Public Health, Eland said.

The county Health Department also has asked Sierra Pacific to limit vaccines to no more than 1,000 per day, so that the center can remain open Monday through Friday, Lembo said.

Sierra Pacific began en masse inoculations on Wednesday at the Herndon and Spruce centers and then focused on the drive-thru operations on the Spruce center just west of Cedar Avenue in northeast Fresno. Most of the center’s spacious parking lot has been designated for the vaccination process, including registering, the shot itself, and then the mandatory 15-minute wait afterward.

By Thursday, when many learned via word-of-mouth that vaccinations were available to the general public, long lines of traffic were snaked along the curb lanes for blocks leading to the center.

Lembo said the high demand for the vaccine might be met if other healthcare providers can step forward to provide similar services.

Dan Manriques, an officer with the Clovis Unified School District Police, which has been providing security at Sierra Pacific, said he was concerned about how people would react when they learned they had waited hours but would not be getting a vaccination.

Lembo said the Fresno County Sheriff’s Office will join Clovis Unified to provide security at the site starting on Monday.

Meanwhile, the Fresno County Department of Public Health is providing vaccinations at the Fresno County Fairgrounds in southeast Fresno seven days a week, but people need to register for an appointment. On Thursday, people waited on foot in lengthy lines at the fairgrounds to get their shots.

Related Story: They Stood in Lines for Hours to Get COVID Shots at Fresno Fairgrounds

As of mid-morning Friday, the website reported that all appointments have been filled, but people should check back when new days are posted for appointments.

UHC said that it had 500 doses and would administer the shots until it ran out — or until 3 p.m.