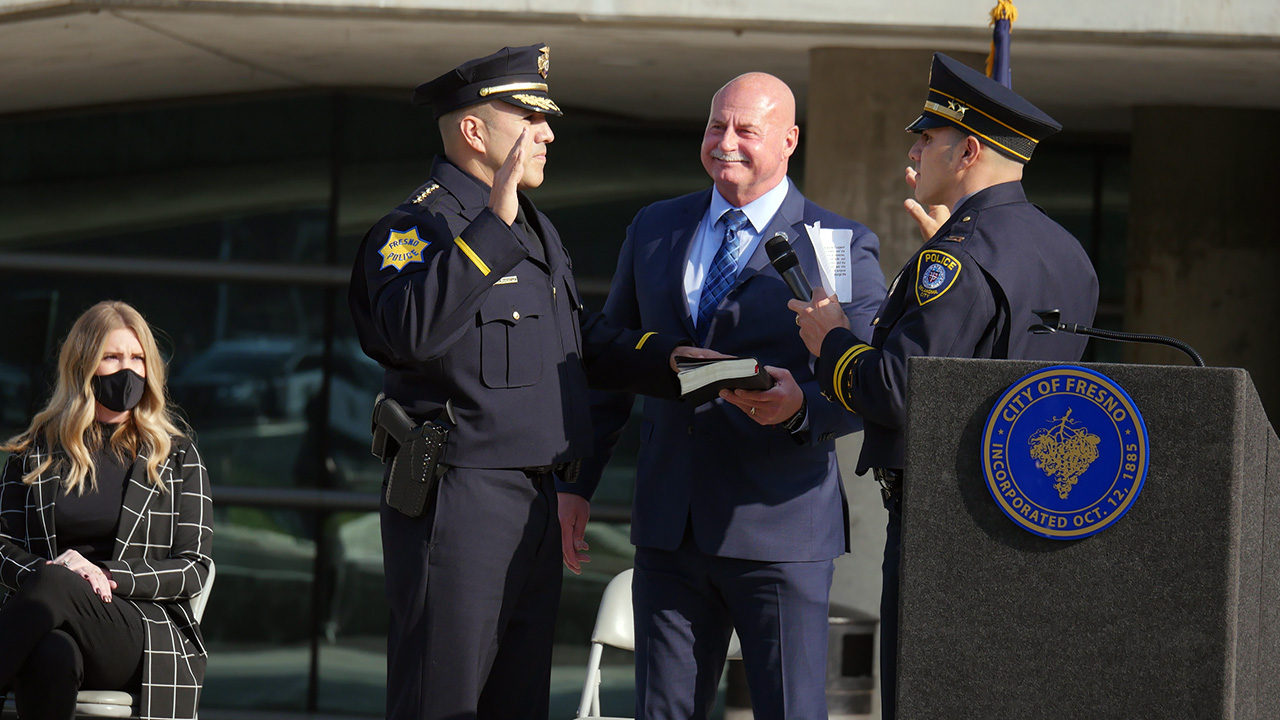 Paco Balderrama thought he would have a honeymoon period as Fresno’s new police chief.

A recent surge in violent crime changed his mind.

“Initially, I had a 30, 60, 90 day plan to kind of ease in and get to know everybody, not just the department members, but also the community. But that’s kind of out the window right now because there’s a lot of issues that need to be addressed immediately. And violent crime is number one,” Balderrama told the media after his swearing-in ceremony.

Balderrama was sworn in as the 22nd police chief in the city’s history and the first Latino chief. His twin brother Beto Balderrama, a captain with the Oklahoma City police department, performed the oath on top of City Hall’s fountain — the water was turned off. His wife, Kyla, pinned the chief badge on his uniform.

Coming from Oklahoma City, a veteran of 20-plus years — most recently as the police department’s deputy chief — Balderrama said he’s received a “warm” welcome from the Fresno community.

“I’m settled in and I’m ready to get to work,” Balderrama said, who is now living in north Fresno.

He said listening is the best strategy.

Balderrama said his goal is to stop crime before it happens.

“If we are responding to a call after somebody has already been hurt, shot or killed, then that’s not good enough, you know?” Balderrama said. “We want to gather the information needed so we can respond and we can be more proactive.”

The new chief made it a point to let his officers know they are supported by him and hope that leads to a safer city.

Dyer, when introducing Balderrama during the ceremony, said he may be too busy running the city to be looking over his shoulder. Dyer served as police chief for 18 years before retiring in 2019. He won election for mayor and was sworn in, himself, last week.

“I can promise you, as the mayor of the city, I got plenty of things to focus on. And I can’t wait ’til Paco takes the reins because it will be your police department to run. And that is my commitment to you,” Dyer said.

Balderrama said Dyer’s support helped him in his decision to take the police chief position.

Councilwoman Esmeralda Soria said Balderrama has a chance to inspire the Latino community.

“It excites me that the little boys and the little girls from the Latino community can see someone that looks like them and that speaks their language and that they say, you know what, I want to be a police officer one day. I want to be a chief of police,” Soria said.

Hall, the chief for 15 months, will conclude his 42 years with the Fresno Police Department this week. In his final remarks, he choked up when talking about his family sticking with him the entire time.

“It felt pretty good not setting an alarm this morning, and I won’t miss the early morning or late night calls,” Hall said.

When Hall was the surprise selection to replace Dyer in 2019, it was understood it would be for a limited time. Hall faced mandatory retirement in April.