COVID-19 symptoms ranging from mild to severe are what’s left in the wake from the earlier stages of the pandemic. Some people continue to deal with lingering issues long after being discharged from area hospitals. While others have recovered without much issue at all.

Nearly nine months’ worth of survivor stories in Fresno County give an early indication of what types of symptoms have come, and which ones haven’t gone yet.

Gabby Manoz was pregnant when she contracted COVID in August. She still takes oxygen and gets home visits from therapists because it’s too dangerous for her to go back into the hospital.

Timothy Hahn and his whole family came down with COVID-19 early in Summer of 2020. He says he and his daughter had moderate symptoms, but his wife and son fared much better. He still deals with a metal taste in his mouth after having returned to his job as police academy coordinator at Fresno City College, but says he’s recovered well.

Sofia Perez was in a coma, suffered a stroke, was placed on a ventilator and eventually made what doctors describe as a ‘miraculous recovery.’ She still complains about fatigue, difficulty breathing, and pain in her legs.

GV Wire℠ caught up with all of them to pull back the curtain and see what it’s really like to battle, and in some cases, continue dealing with the effects of COVID-19. 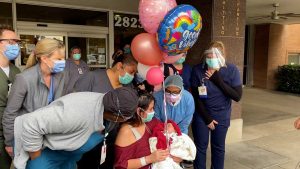 “I know I’ve gotten stronger because of everything,” says Manoz to GV Wire℠ by Zoom. “I’m not really trying to plan ahead, because you never know what life could bring you.”

Manoz says she’s still unable to work because of how much fatigue she deals with each day.

Back in late summer, her mom found her very sick at home and rushed her to Madera Community Hospital. The 25-year-old mom-to-be was assessed and soon transferred to Community Regional Medical Center in Fresno for a higher level of care.

Doctors say Manoz was not responding to her COVID treatment. So, they delivered her baby at 32 weeks, bringing little Madelyn Rose into the world on September 11.

“I’m just hoping I get off this oxygen, which I eventually know I will, and everything will go back to normal,” she says. “I get really tired easily and I feel like that anxiety comes up when I can’t breathe,” explains Manoz.

She’s thankful she’s starting to walk better and better each day, while also caring for her now 3-month-old daughter. “It‘s really difficult trying to raise her and take care of myself at the same time.”

Doctors credit a treatment, known as ECMO, that oxygenates and pumps a patient’s blood outside the body. for saving her life.

“My family is really supportive and they’ve been helping me through it all,” says Manoz. “And like I said, I’m just trying to be the best mommy I can be.” 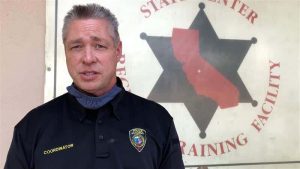 “I equate it to a flu on steroids for for me.”–Timothy Hahn, COVID-19 survivor

Hahn says he’s a person that likes to go to the gym, and runs to stay in shape. But when COVID-19 hit, it hit pretty hard.

“The body aches and the migraine headaches were like I’d never had before,” says Hahn. “I had some kidney pain, some nausea.” His temperature broke after about three days, and never really got that high thanks to Tylenol.

“Then I lost all my taste and smell after that,” said Hahn. He says his daughter had pretty similar symptoms.

“My wife and son, who both had it, didn’t have those same things at all,” he explains. He says his wife did complain of moderate flu like symptoms which included an upset stomach and only a slight temperature.

He says his son only had a stuffy nose and a mild temperature. After about 4 days, he was all done with his symptoms.

Hahn says he took off the required 14 days from work, but was able to return to the academy right after. For the first several weeks of work he would come home very tired, but he was able to persevere through it.

After about a week and half, his fatigue finally abated.

A brand new class of 45 police cadets started on Monday and Hahn is happy to be shepherding them into a new year. 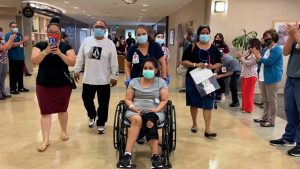 “I have one leg that continues just tingling. In my other leg, I have a limp.”–Sofia Perez, COVID-19 survivor

“I don’t remember a lot,” says Perez of her 2 month long stay at Community Medical Regional Center. “I only remember, towards (the end of) my discharge.”

She remembers the hospital staff members were all very nice to her. “It was really lonely, that’s for sure,” she says referring to the inability of her family members to visit her in the hospital.

She was discharged on June 3 but is still experiencing side effects from the virus today.

“I am experiencing haziness,” Perez says. “I actually just went to a doctor and I was just telling him, I’m forgetting a lot of things. Is that normal? And he explained, due to COVID your body went through a lot.”

Perez had multiple strokes during her hospital stay. She was initially diagnosed with asthma because of coughing and difficulty breathing, but then she complained that she couldn’t breathe, her family called an ambulance.

She arrived at CMRC in early April.

Doctors placed Perez on a ventilator. She was in a coma.

She says she still has some difficulty breathing, but her oxygen levels have been up recently.

The biggest issue she’s dealing with is her legs.

“I have one leg that continues just tingling. In my other leg, I have a limp,” explains Perez. She says her doctors have considered surgery to help with the limp, but they don’t want to put her under anesthesia again because they’re not sure how her body will react.

One thing she is thankful for is that her voice has gotten better. “But it’s still a little raspy.”

She credits her faith with helping her recovery and is happy to be home again spending time with her 8 year old daughter and 15 year old son. When she spoke of her kids she began to tear up.

“After COVID, I’m like an emotional wreck, I cry for everything.”